So big it can operate as a mobile hospital, the Russian Mi-26 Halo has the power to lift a C-130 Hercules. This is the story of the largest helicopter ever made… 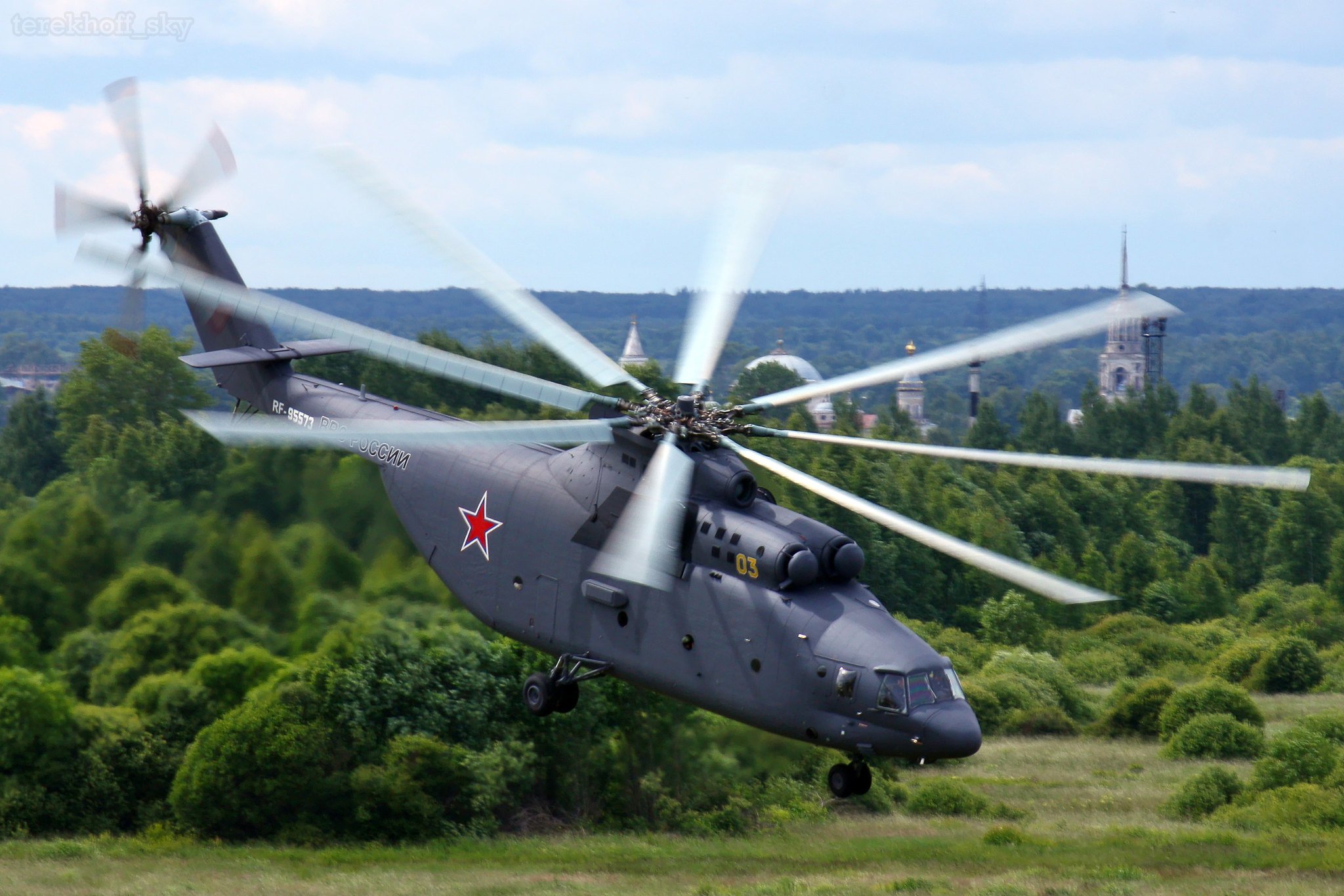 CH-47 Chinooks are big. CH-53 Sea Stallions are bigger. But the Russian Mi-26 Halo is biggest.

The Halo is the undisputed king of military heavy lift helicopters. At 40 metres or 131ft, it is twice as long as a cricket wicket and taller than a giraffe, and is the largest helicopter ever to enter mass production. It is also the most powerful: two 11,400bhp engines allow it to carry loads weighing up to 20 tonnes – that’s the same as a C-130 Hercules. In 1982 the aircraft set the world record for the heaviest mass lifted to 2,000 metres by carrying a load of 56,768 kilograms, a record that still stands today.

Developed in the early 1970s by the Mil Design Bureau, the Mi-26 was originally envisaged as a platform to transport armoured fighting vehicles and ballistic missiles. Larger Soviet cargo aircraft would deliver the vehicles and weapons to established operating bases and the Halos would disperse them to discrete, tactical firing positions.

One of the stringent design requirements for the helicopter was that its empty weight should be less than half of its maximum take-off weight. Why is this so significant? By making the aircraft as light as possible, this would ensure that more of the engine’s power could be utilised for lifting cargo, rather than being used to lift the vehicle itself.

The two turboshaft engines drive eight blades (the most on a heavy lift helicopter), forming a rotor disk with a diameter roughly matching the wingspan of a Boeing 737. The tail rotor is massive too, approximately as wide as the main rotor on an MH-6 Little Bird, the light attack helicopters made famous in the movie Black Hawk Down.

Access to the 47ft long cabin is via a tail-mounted ramp and two huge clamshell doors. The cargo hold is large enough to transport two armoured personnel carriers, or 85 combat-equipped soldiers. Two ceiling-mounted cranes allow up to five tonnes of cargo to be lifted and positioned onboard, greatly reducing the aircraft’s dependency on ground equipment. 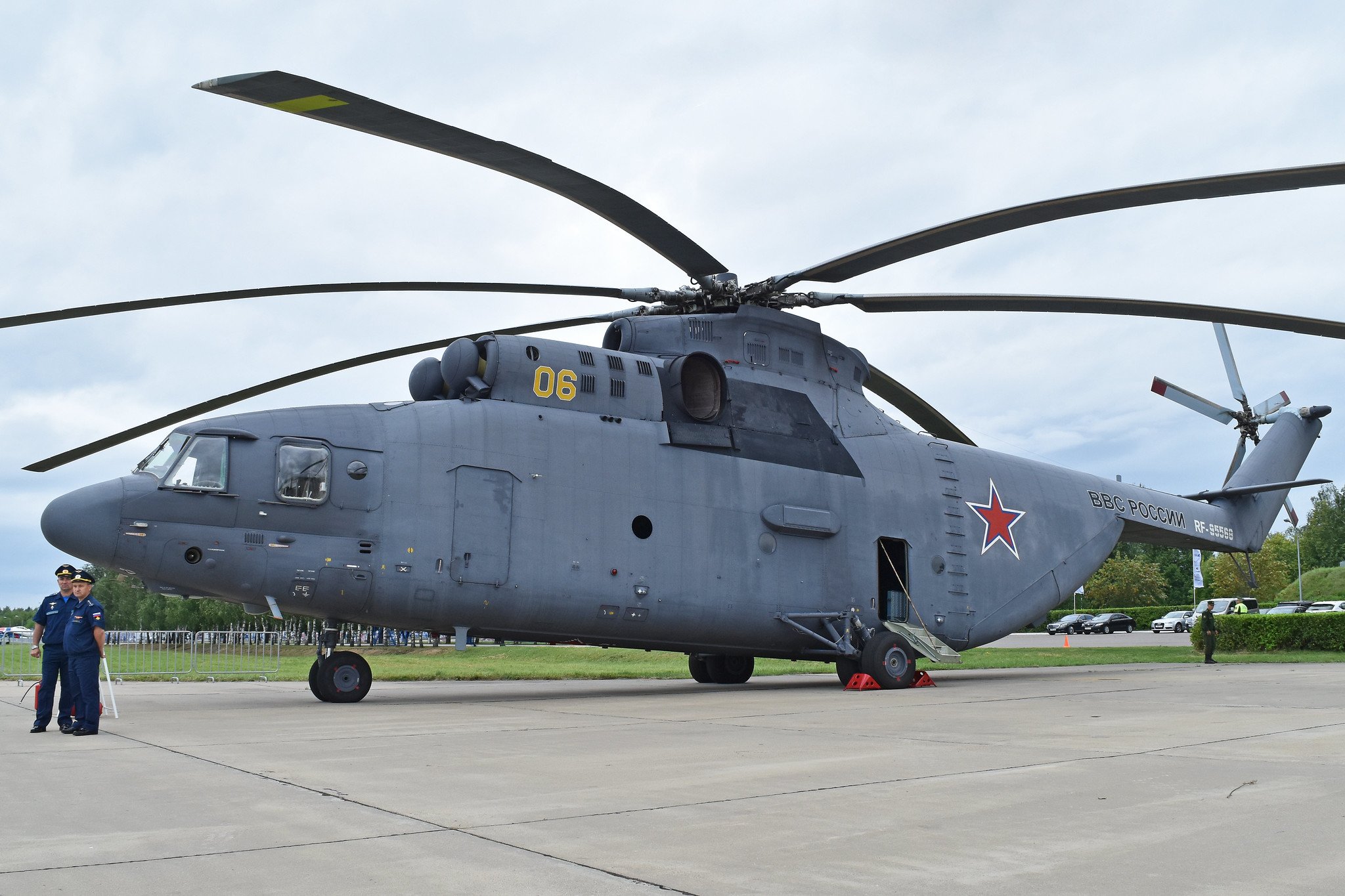 It wasn’t long before the Mi-26’s size and performance was adapted to fulfil a variety of new tasks. As many as 13 variants have been developed, including an aerial firefighter with a 15,000-litre internal tank, to a Halo specifically built for large-scale aeromedical evacuation. In the latter role, the Halo can carry 60 stretchers, or even work as a mobile intensive care unit or field hospital. A 65-seat civilian version was also developed, the Mi-26T, which saw extensive use in Siberia during the late 1980s, transporting workers to developing gas and oil fields.

Although initially developed for the Soviet military, the mighty Mi-26 achieved export success to 13 nations and numerous civilian operators across the globe. Whilst the majority of military users of the Halo are ex-Soviet states and nations with strong Russian relations, one surprising operator is Jordan. The Middle Eastern state operates an entirely western-built air force with the exception of its four Mi-26s (two delivered and two on order), which it plans to use for firefighting missions.

Despite its enormous size, the Halo’s crew is typically little bigger than that of a Chinook. The regular compliment is five crew (two pilots, one navigator, one flight engineer and a loadmaster), as opposed to a Chinook’s four. An upgraded Mi-26T2 version features a glass cockpit, which reduces the crew by two, along with improved engines capable of operating in temperatures of up to 40 degrees. Well suited for hot weather operations, it is this enhanced aircraft which has been purchased by Jordan, as well as Algeria. Further developments include the Mi-26T2V for the Russian military, which includes an enhanced self-protection suite and modifications for use in cold weather. 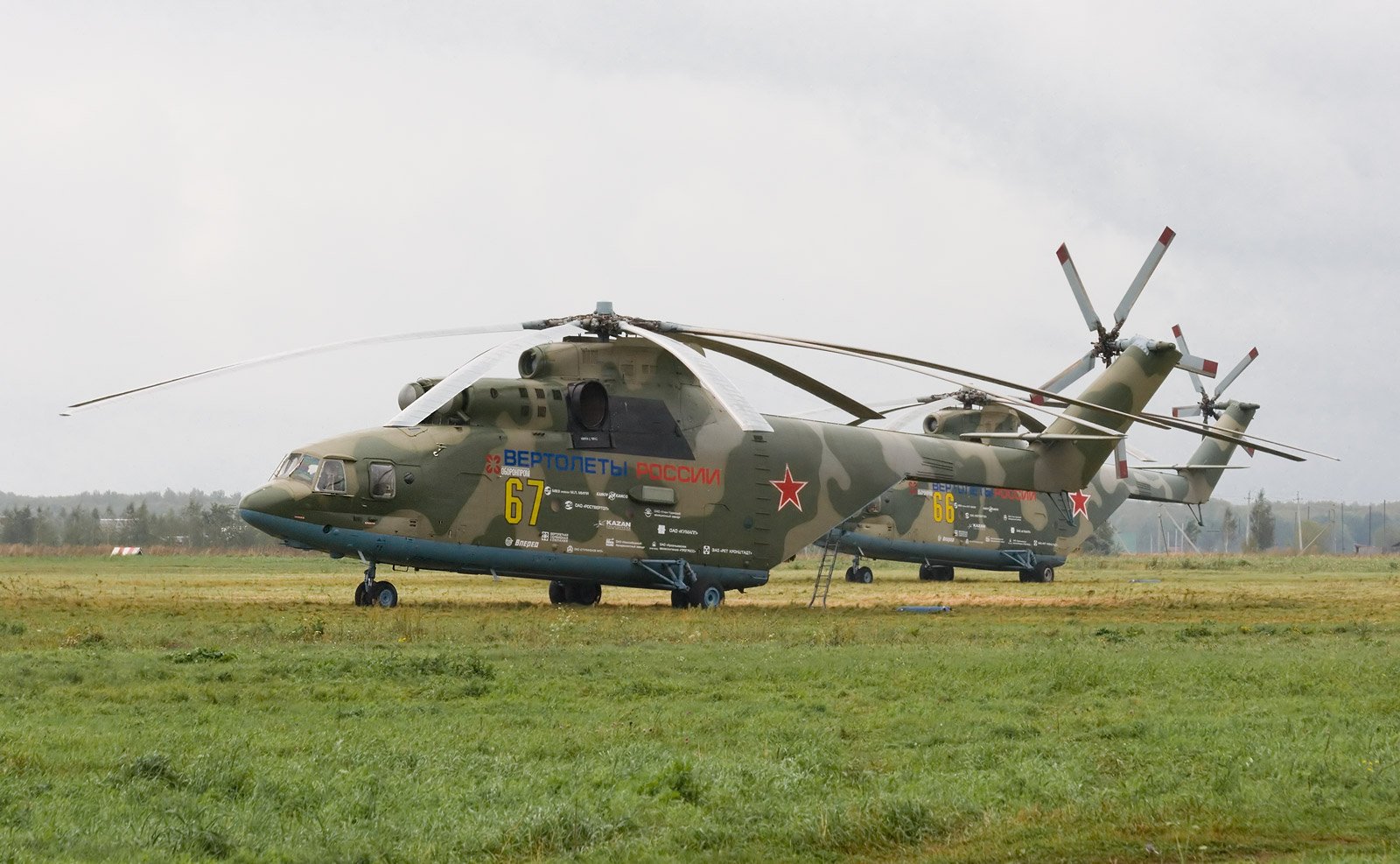 Thanks to its incredible lifting performance, the Mi-26 has been involved in some very varied operations and missions during its service life. Less than three years after its introduction with the Soviet Air Force, 30 Mi-26S Halos were mobilised to help respond to the 1986 Chernobyl nuclear disaster. The aircraft were used to drop large amounts of sand and boron over the exposed reactor, as well as spraying the surrounding area with a dust suppressant from large internal tanks. In an attempt to shield the crews from radiation, the aircraft were fitted with cabin filters and protective screens. The Halos used in the operation became so irradiated the Soviets had no choice but to abandon them in large equipment graveyards not far from the Chernobyl site. Previously visible on Google Earth, most if not all have been broken down and removed.

Halos were utilised during the recent conflict in Afghanistan to recover numerous coalition helicopters that had crashed or made hard landings. At least one Dutch and two US Chinooks were recovered by the aircraft – the latter after it was determined they were too heavy and located too high to be carried by the US CH-53. The density of air decreases as altitude increases, which in turn reduces engine power and the lift generated by a helicopter’s rotor blades. The Mi-26’s surplus of power negated this, making the lifts possible. 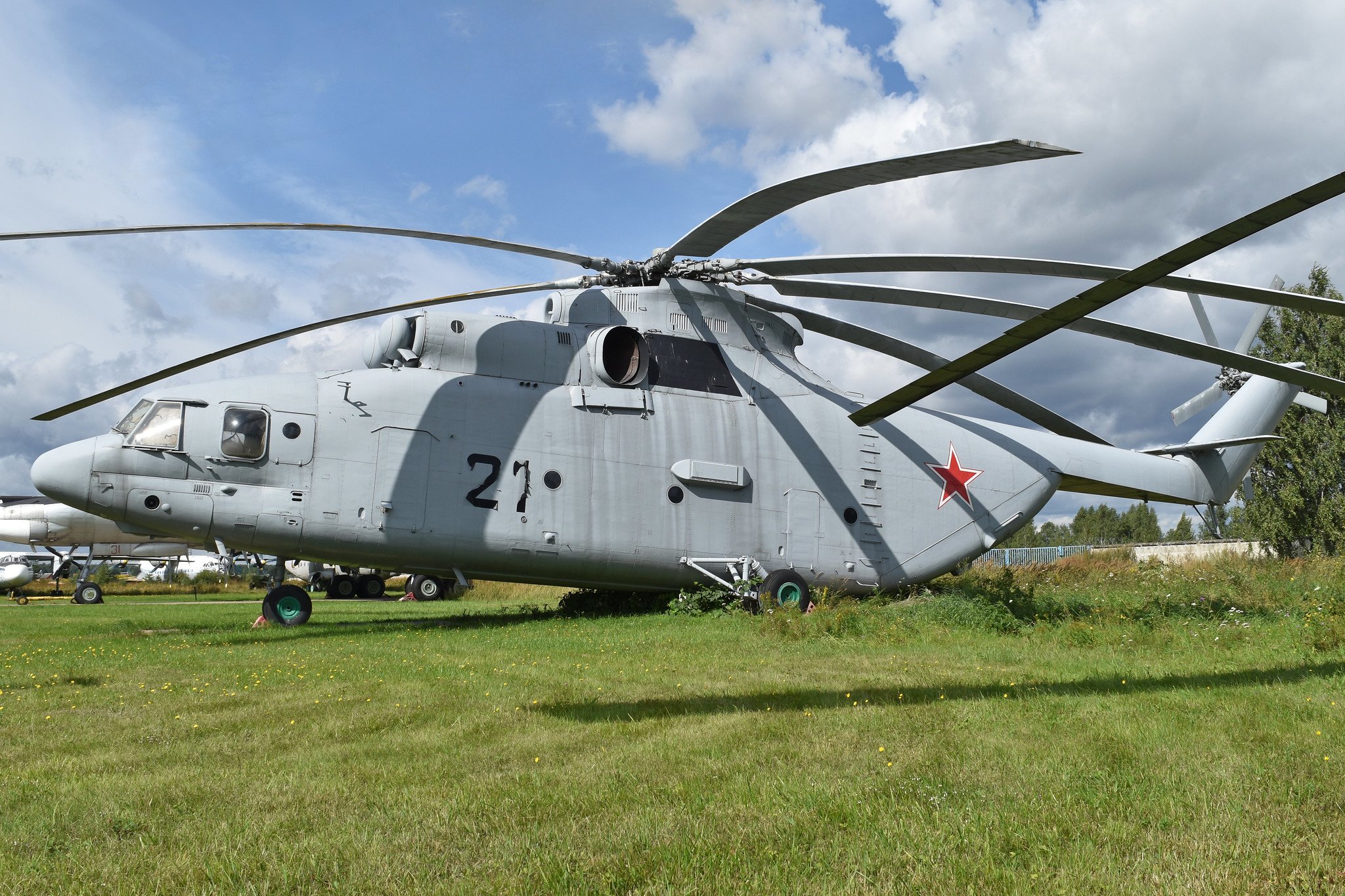 Perhaps the aircraft’s most unusual heavy lift task was to recover a 23,000-year-old woolly mammoth preserved in the Siberian tundra. Scientists in Russia planned to study the animal, and it was preserved in a block of ice weighing around 20 tonnes, right at the very limit of the aircraft’s performance. A rumour circulated that after the move the aircraft was returned to the factory to check for structural bends and deformations in the airframe.

The Mi-26 has performed its key role of ultra heavy lift superbly, straight from the design board. It has lifted loads far beyond the capabilities of its nearest rivals, in some of the most austere parts of the globe. With cockpit modernisation and engine developments, the Halo is likely to continue turning heads skywards for a long time to come.