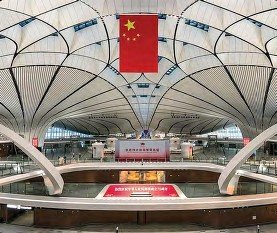 CHINA’S NEWEST and largest airport began operations on September 25 with China Southern Airlines operating an inaugural service to Guangzhou. The opening of Beijing/Daxing also marked the closure of the country’s first airport at Nanyuan, which shut its doors on the same day after 109 years.

Overall, seven Chinese carriers operated services on the new facility’s first day, with big names including Air China and China Eastern also making an appearance following the official opening by Xi Jinping, the Chinese president. Other firms such as Beijing Capital Airlines and Juneyao filed to start scheduled services from Daxing on October 27.

British Airways was expected to become the first overseas airline to serve Daxing when it moved its Heathrow service from Beijing/Capital to the new facility on October 27, while LOT Polish Airlines and Finnair were due to retain their existing Capital routes while launching additional services to the state-of-the-art site from October 28 and November 3, respectively. Officials expect the relocation operation to conclude in 2021.

The opening of Daxing comes at a time when its neighbour, Beijing Capital is plagued with delays as it struggles to cope with annual passenger figures of more than 100m against a theoretical capacity of 85m. Through leveraging its modern design, Daxing is expected to become one of the world’s largest airports. The sprawling site boasts what is said to be the world’s largest terminal in a single building and is predicted to receive a large share of the 170m annual passengers the Chinese capital expects to welcome by 2025. Designed by Iraqi architect Zaha Hadid, the striking structure echoes traditional Chinese themes with six flowing arms around a central courtyard.

Planners say the compact radial design allows a maximum number of aircraft to be parked directly at the terminal with minimum distances to the centre of the building. The structure offers 79 gates with jet bridges connecting directly to the building.

As for Nanyuan, the facility quietly closed after its last flight, when a China United Airlines aircraft departed shortly after 10pm. The airport first opened in 1910, and in its long history has experienced two world wars, China’s civil war and the founding of the People’s Republic of China in 1949. A new terminal was opened in September 2013 with a handling capacity of six million travellers a year. In 2018, the facility accepted 6,512,740 passengers accounting for 44,468 aircraft movements.

Located just eight miles (13km) from Tiananmen Square, the now decommissioned site was a hub for China United Airlines, explaining why the low-cost carrier had to move its operations to Daxing immediately following the closure of the airport.

The design of the two sites couldn’t be more different. Nanyuan, a former military base, is defined by its conventional rectangular shaped buildings which pale in comparison to Daxing’s striking curved star shaped design. According to staterun newspaper China Daily, it’s likely that the old site will now be turned into an aviation museum.

The opening of Daxing comes against the backdrop of significant growth within the Chinese aviation industry. The country is set to overtake the United States as the largest market by 2025 and, according to the International Air Transport Association (IATA), will add one billion new passengers by 2037. (Main photo: AirTeamImages.com/Markus Mainka)