Year of the Typhoon?

With unparalleled capability growth, force expansion, improving availability and reducing operating costs, this year may be the year of the RAF Typhoon Force.

PREVIOUS TYPHOON capability improvements have tended to consist of the integration of a single new weapon (Enhanced Paveway II in 2008, Paveway IV in 2014) but the last six months have seen three new weapons integrated – each marking a dramatic new capability area.

The three new weapons were integrated in two distinct phases under the £425 million Project Centurion upgrade.

The so-called Phase 2 Enhancement saw the incorporation of enhanced software and integration of the MBDA Meteor beyond visual range air-to-air missile and the MBDA Storm Shadow conventionally armed stand-off missile. Meteor and Storm Shadow in service dates (ISD) were declared on August 31, 2018 opening the way for the use of Meteor on QRA; the employment date was an operational decision for the Typhoon Force. In fact, the first QRA launch carrying Meteor took place on December 10, 2018.

Phase 3 Enhancement covered the integration of MBDA’s Brimstone 2 precision attack missile, whose ISD was declared on December 18, 2018. With all three elements of Centurion declared operational, the Typhoon was ready to fully take over from the Tornado GR4 on Operation Shader and its subsequent withdrawal from ops in early February and retirement in March.

On January 30, the RAF issued a video showing what was described as the first operational Typhoon sortie carrying the Brimstone missile. The video showed individual Brimstone missiles being fitted to the outboard hard points of the now-standard triple-carrier outboard of the aircraft’s underwing drop tanks. Typhoon FGR4 ZK301, also carried a pair of Paveway IV precision-guided munitions, a Litening III laser designation pod; with ASRAAM air-to-air missiles on the outboard pylons and a single AIM-120C AMRAAM in the forward port side missile recess. Tornado GR4s flew the last Shader sorties the following day.

Further capability enhancements are already planned. The RAF plans to use its Typhoons in concert with the new F-35B Lightnings, using the strengths of both to counter evolving threats in contested environments. To facilitate this, a plan to achieve MoD main gate investment approval for a new active electronically scanned array (AESA) radar in the latter half of 2019 is in effect. Dubbed as a more advanced version of the rather awkwardly named Captor-E Radar 1+ which will be delivered to Kuwait and Qatar, the new unit will probably have a new antenna and feature enhanced electronic attack and datalink capabilities. Imaginatively known as Radar 2, the new version will be fitted in some 40 Tranche 3 RAF Typhoons.

Typhoon Force is also being expanded. The 2015 Strategic Defence and Security Review (SDSR 15) announced an increase in the number of frontline Typhoon squadrons from five to seven, and also directed Air Command to explore options to increase the force to eight squadrons. The two new squadrons were to use Tranche 1 aircraft whose early withdrawal had been cancelled as part of the review. 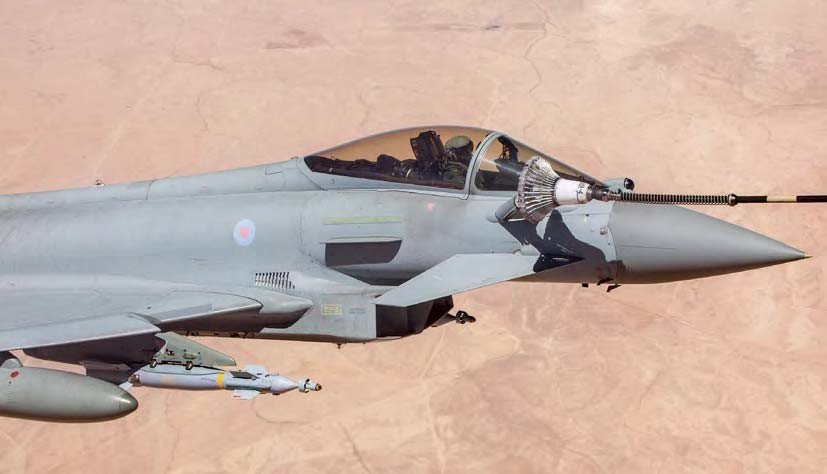 First of these new units will be IX(B) Squadron, until March 31 a Tornado GR4 unit based at RAF Marham, which will stand up at RAF Lossiemouth, Moray from April 19, equipped with Tranche 1 aircraft. Some reports suggest the Tranche 1 aircraft will be used for QRA and air defence duties, and perhaps for Red air adversary training. Others expect the Tranche 1 aircraft to retain their air-to-ground capability, as the only Typhoons equipped with the 1,000- lb Enhanced Paveway II dual-mode bomb. Funding will dictate the extent to which further software drops might be incorporated.

Unit two will be 12(B) Squadron, which will initially operate as the UK-Qatar Joint Typhoon Squadron, fulfilling the UK’s contracted requirements to Qatar. The unit will temporarily integrate Qatari air and ground crews and support their training as the Qatar Amiri Air Force brings the Typhoon into service. Qatari personnel will gain valuable frontline experience on an RAF Typhoon squadron to speed up their preparation for when their own jets are delivered. Before this, the joint UK-Qatar squadron will deploy to Qatar, where it is expected to play a vital role in securing the skies during the 2022 FIFA World Cup in Qatar. What variant of Typhoon will 12(B) Squadron fly? Not surplus Tranche 1 aircraft but Tranche 2 and Tranche 3 machines.

Horse Guards Parade, London was the venue for the squadron’s formal standing up ceremony on July 24, 2018, and its ongoing build-up will continue throughout 2019 and it will thereby be ready to commence training with Qatari pilots, upon their graduation from 29(R) Squadron, the Typhoon OCU, planned for February 2020.

Thereafter the unit will increase in size and scope, as more Qatari pilots and ground crew graduate from their training. The squadron’s full operational clearance will be achieved in 2022.

Originally, 12(B) Squadron was going to be additional to the two extra Tranche 1-equipped Typhoon units, but the make-up and financial feasibility of the eighth and final squadron will now be reviewed after the squadron returns from its deployment to Qatar. 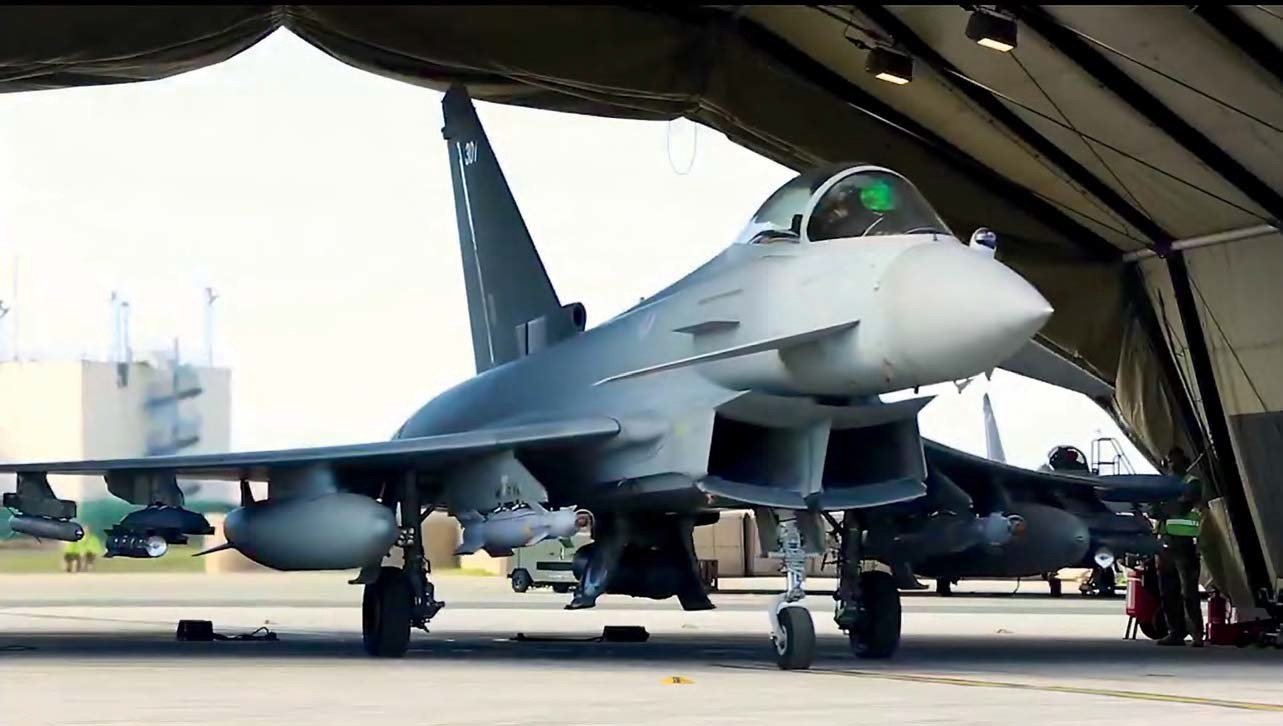 Formation of an eighth frontline Typhoon squadron may depend on increasing the forward fleet beyond its current 101 aircraft total.

Following a freedom of information request that revealed 55 of the RAF’s 156 Typhoons were in the sustainment fleet, with 101 in the forward fleet, some British newspapers expressed indignation that one third of the fleet was not available for operations.

Unbelievably, the newspapers forgot an important couple of facts. One, the forward fleet includes serviceable aircraft and those with short-term unserviceability snags, those undergoing minor inspections, rectification or repairs, or routine forward maintenance.

Two, the sustainment fleet comprises aircraft not immediately available for operations, and includes aircraft undergoing planned depth maintenance or upgrade programmes, those in temporary storage for fleet management, and redundant and surplus aircraft awaiting disposal. Figures given in the freedom of information response showed a 19-aircraft increase in the forward fleet compared to February 2018, and seven more in the sustainment fleet, but do not represent any kind of crisis or cause for alarm.

Reduced operating costs in the Typhoon Force are a result of the TyTAN (Typhoon Total Availability eNterprise) – an innovative ten-year support partnership agreement. TyTAN was launched in August 2016 and is designed to reduce the cost of support by around onethird. If that’s achieved, TyTAN’s management team reckon the initiative will free-up an estimated £500m of savings; money that will be reinvested in the development of new capability enhancements. Estimates made so far, indicate TyTAN has already seen Typhoon operating costs reduced to a level below those of the single-engine F-16; impressive, though the F-16 is a much older jet. Depth maintenance inspections that were initially scheduled every 400 flying hours have already been extended to a 500-hour interval, exploiting Typhoon’s proven reliability, and are expected to be increased to as much as 750 hours.

Alongside all of this good news, there are real concerns about manning, with suggestions that pilot strength, in terms of a pilot:aircraft ratio, has fallen to an all-time low, and retention of experienced aircrew a real and growing concern. Though morale on the Typhoon force is high, the aircraft remains popular with its pilots, there is a growing burden of deployments that includes the Falkland Islands detachment, manning the six-aircraft detachment at RAF Akrotiri, Cyprus for Operation Shader and ad-hoc deployments for air policing of the Baltic States and Romania, in addition to maintaining two QRAs at both RAF Coningsby and RAF Lossiemouth. Some pilots see a move to the airlines as being more family-friendly, while others may be tempted by lucrative contracts in the Middle East with new Typhoon operators.

The manning crisis was tacitly acknowledged when the RAF recently announced that the current Typhoon display pilot, Flight Lieutenant Jim Peterson would continue for the 2019 season, instead of being replaced by Flt Lt Nick Callinswood as had originally been planned. An RAF announcement said: “After further consideration of 29 Squadron Typhoon instructor manning requirements during this very busy period of Typhoon force growth, it has been decided to be more appropriate for Jim to continue for the 2019 display season.” 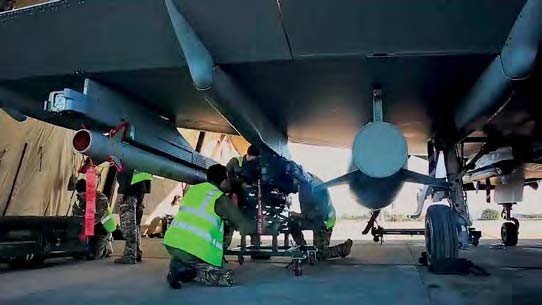 RAF ground crew load a Brimstone precision attack missile to the outboard pylon of the triple-carrier loaded to the hard point outboard of the Typhoon’s underwing drop tank.
RAF Akrotiri