Last week Wg Cdr 'Tim' Elkington received the Ushakov medal from the Russian Ambassador at the Embassy in London.

This medal, honouring Admiral Ushakov, is awarded for meritorious Naval service to the Soviet Union. (The Admiral never lost a battle!)

Tim was involved in the supply of Hurricanes to Murmansk in 1941, flying off a Carrier to land on Soviet territory.

...And this is all after downing an Me109 in the Battle of Britain, being downed himself the next day, and a stint as escort for Atlantic Convoys again on the Hurricane.

Seemingly forgotten in the depths of bureaucracy, a few gentle prods in the right direction made all this happen in less than two weeks.

Wow!
Well done to all concerned.
That really is good news.
Congratulations to Tim as well.
I don't doubt that the award was hard earned.
Gerry

I am very suprised that any diplomatic activity of this kind has been going on recently.

I's nice to see that even in todays sour political climate between the nations real heroes are still recognised,well deserved Tim :)

Tim - the Father of the Forum (maybe) very many well deserved congratulations!;)

Must be getting old - had to look up поздравления - never used it!

"Two beers, please, and my Friend is paying"

A well deserved honour for a brave man. Thanks as well to Oily Rag for posting. 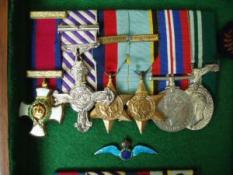 Very well done Cotteswold, anyone concerned with war duties in Russia during WW2 deserves a medal! Did you get the Arctic Star recently?
Regards,
Simon

When we are critical of delays in the system, this may be worth a read?

I was not amused by the ex-RN yacker!!

When we are critical of delays in the system, this may be worth a read?

I was not amused by the ex-RN yacker!!

Sorry the links are not working :(

Thanks - but why do they work OK with me??

Hi All,
I would just like to add my warmest congratulations for receiving at long last what was due. :applause:

Thanks - but why do they work OK with me??

Hi Tim,
I really don't know to be honest,maybe because you are hosting them.All i see is

If you think this is a problem with Flickr, please tell us.

Here is a link to the home page.

Well done Sir! Are you out and about this year? Can we unite you with my Hurri cockpit?

The expression on your face says it all!!;)