Be funny if it has just been moved down the road to a different storage point because it was in the way !

As for the change of government, when this happened, before undertaking the recovery,surely the whole thing would have had to have been re discussed with the new government prior to any recovery attempt

Err, I'm not quite sure I believe I just read that,

The government changed in a military coup. Look it up. It wasn't a case of a change of democratically elected government, which might make what you propose possible. The government was overthrown one night. How exactly do you propose that the RAF Museum - an organisation right out on the fringe of our own government, could expect that to happen, and then negotiate for the release of something so utterly trivial, with a regime interested in just about everything else in the country ahead of it?

Believe it or not, at the end of the day, it does appear someone has managed to do it,

Only if the vague rumour is true. Even if it is, it happened at quite some distance from the original work in dismantling it.

For what it is worth, and even if the rumour is true, then it would perhaps have been a surprising if not foolhardy thing to have done.

Given the intense international interest in this airframe, and even if a supposed new owner had secreted it away to foreign parts in some kind of 'legal' (!) deal with whoever in Egypt, then it is an airframe that will be a bit of a hot potato I'd suggest. A bit like having a misappropriated Picasso in your vault. What on earth can you do with it without causing a brew-ha-ha?

That said, the rumours are out there in some areas of the historic aircraft world on both sides of the Atlantic. But they are only rumours. On the other hand, of course, it was initially just a rumour that said the RAFM had handed over a Spitfire in exchange for work to recover the P-40.

Wherever the P-40 is, and the USA seems unlikely, one can only hope that it is safe. More importantly, that the issue of Flt Sgt Copping gets to some kind of resolution in terms of what has gone on since the desert discovery of bones and that the outstanding issues and questions are at least resolved for the family with clarity and honesty even if there can be no absolute resolution.

or even a brouhaha...

Although my preference would be Brew ha ha since I recently found a purveyor of their excellent Ceylon tea. Hence my unconscious use of their brand name.

Editor's excuse. And he's sticking to it :)

You're not the first editor I've edited ;-)

Pat1968 has presented us with some broad, but credible figures for the cost of recovering the P-40 and I would agree with the amounts and his approach. Both Mark12 and Bruce have gone on record to say that £120,000 is a fair price for the P-40 recovery.

Perhaps they could put their heads together as let us know how they would have spent the remarkable amount of £120,000 to recover this aircraft?

Just to add, it is not my intention to embarrass anyone but as this deal involved a public assest this figure deserves scrutiny at the very least.

You are avoiding answering the question. Your cost breakdowns re the P-40. Just broad brush will be fine.

Just the one email at the weekend to the party that wanted me to recover the Afghan Hinds...that would have been ahead of you.

I, or rather my wife, turned it down but I recommended he use a current or former service man with connections, to at least arrive in Kabul to a friendly face and a secure base.

I was invited to look at the containers and photograph the contents on his property when they arrived.

I published a couple of shots on his behalf some time later, if that was your concern. I think he wanted to show them off minimally as he was proud of the result.

If you were the sole financier, recoverer, importer, container procurer, transporter and owner, then that was not mentioned to me at that time.

Do what I did, and talk to the people that did the job. There is a big point being missed, but its not for me to say.

A very big point which can be guessed at even when one has no experience of aircraft recovery as a specific activity in this region? But one that might be understood by anyone who has had to do anything involving officialdom there? I am sure that was a factor, at least. Still seems a lot, though.

No, it really isn't, but it isn't for me to break a confidence.

To ask the Secretary of State for Defence, if he will make representations to the Egyptian government on the possibility of submitting human remains found in the Western Desert in 2012 if still in existence to new DNA tests to compare them with DNA samples provided by the family of Flight Sergeant Dennis Copping whose aeroplane crashed in the Sahara on 28 June 1942.

Rigorous DNA tests undertaken by the Egyptian authorities at our behest some three years ago were unable to provide viable DNA samples due to the age and degradation of the human remains found. There are no plans to undertake new DNA tests.

Well that is interesting. We have gone over and over this business, and now the same stories come out in Westminster. First the bones were found, and we offered to test them, then a second set was found, but Egyptian authorities couldn't extract DNA, but it was said they were from two different people, then there was no second set, then someone decided that no tests had in fact been done. I got very mixed responses from the MoD and the British Embassy in Cairo. No-one seemed willing to answer my simple questions.

Now I read that the same story is coming back into fashion: "Rigorous DNA tests" were done but nothing found due to age (what was the age of the bones found - how was that determined?). It was initially said they were hundreds of years old. Where are the bones now? I am surprised and frustrated by this "official" announcement. And Dennis Coppings' family must be even more frustrated than those of us who tried.

As an observation only, it doesn't answer the question by Jason McCartney MP: '....will [he] make representations to the Egyptian government on the possibility of submitting human remains found in the Western Desert in 2012 if still in existence to new DNA tests to compare them with DNA samples provided by the family of Flight Sergeant Dennis Copping?'

11 months on from the last post, has anything happened? Is the silence good or bad?

Please no. It can't have ended up as that. Say it isn't so. 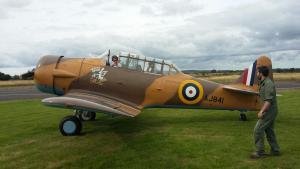 I hope it's a horrible coincidence but was it's last reported sighting in a container outside the museum?