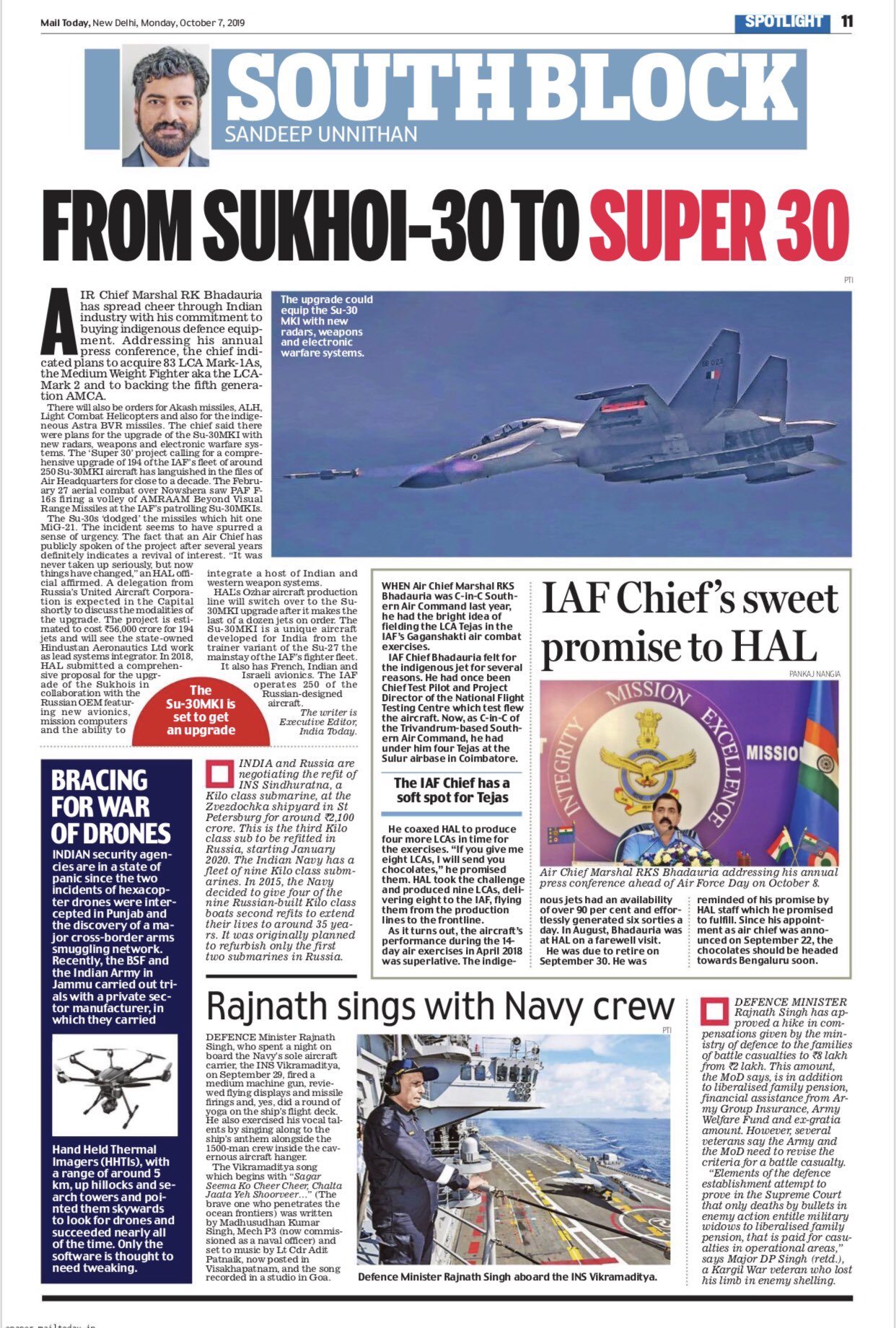 In his first press meet after taking office, he clarified the following things:

- 83 Tejas Mk1A order to be finalised soon
- No additional 36 Rafale fighters being pursued
- 114 MRCA to go to GoI for Acceptance of Necessity following which RFP will be issued
- No imported FGFA. Complete support for AMCA will be provided and IAF will induct an indigenous 5th gen fighter when it will be ready
- Tejas Mk2/ Medium Weight Fighter program will be pursued
- Jaguar DARIN 3 upgrade in progress but no engine change planned
- Mirage-2000 and MiG-29UPG upgrades in progress
- Additional 12 Su-30MKI being ordered
- Additional 21 MiG-29s to be ordered from Russia, upgraded to MiG-29UPG standard
- HAL HTT-40 to be IAF's next Basic Trainer, Pilatus PC-7 Mk2 will not be ordered any more
- Astra BVRAAM inducted and other indigenous electronic equipment, LGBs and PGMs as well
- Rohini radars inducted and Arudhra radars in the pipeline
- Entirely indigenous IACCS system to network all IAF sensors and provide single picture is up and running and providing a quantum leap in SA

The image I posted also mentioned that the 8 Tejas Mk1 fighters that participated in the IAF's Vayu Shakti exercises had a 90% availability while generating 6+ sorties per day each. The fact that ACM Bhadauria has taken charge means the IAF's emphasis will be on indigenisation. LCA and AMCA programs are going to be front and center.

Wing Commander Abhinandan Varthaman, who was awarded the Vir Chakra for shooting down a much more advanced Pakistani F-16 before his MiG-21 was downed on February 27, led a MiG-21 Bison fighter formation at the flypast to a widely cheering crowd at the Hindon airbase.

Three Mirage-2000 fighters, flanked by two larger Sukhoi-30MKI multi-role jets, then flew the 'Avenger' formation to equally huge applause. Interestingly, the two Sukhois were piloted by Wing Commander K P Singh and Squadron Leader Parshuram, who also flew the fighters during the skirmish between the Indian and Pakistani fighters along the LoC.
This, in effect, demolished Pakistan's claim of having shot down a Sukhoi on that day. To rub it in further, the Mirage-2000s during the flypast were piloted by Group Captain Pranav Raj and Wing Commanders Pankaj Arvind Bhujade and Rahul Basoya, who were awarded the Vayu Sena Medals for successfully striking the JeM facility with Spice-2000 penetration bombs in the early hours of Februrary 26.

The IAF chief also awarded unit citations to the Srinagar-based No 51 Squadron of Wing Commander Varthaman and the Gwalior-based No 9 'Wolfpack" Squadron of Mirage-2000s.

The 601 Signals Unit of Squadron Leader Minty Aggarwal, who as a ground-based flight controller showed exceptional alertness to vector the the IAF fighters scrambled to intercept the "strike package" of intruding Pakistani jets on February 27, also received a unit citation. Squadron Leader Aggarwal has been awarded a Yudh Seva Medal for "distinguished services" during wartime.

Wing Commander K.P. Singh and Squadron Leader Parshuram were the 2 Su-30MKI pilots who basically held off 8 F-16s of the PAF and dodged 5 AMRAAM missiles that were fired at them. 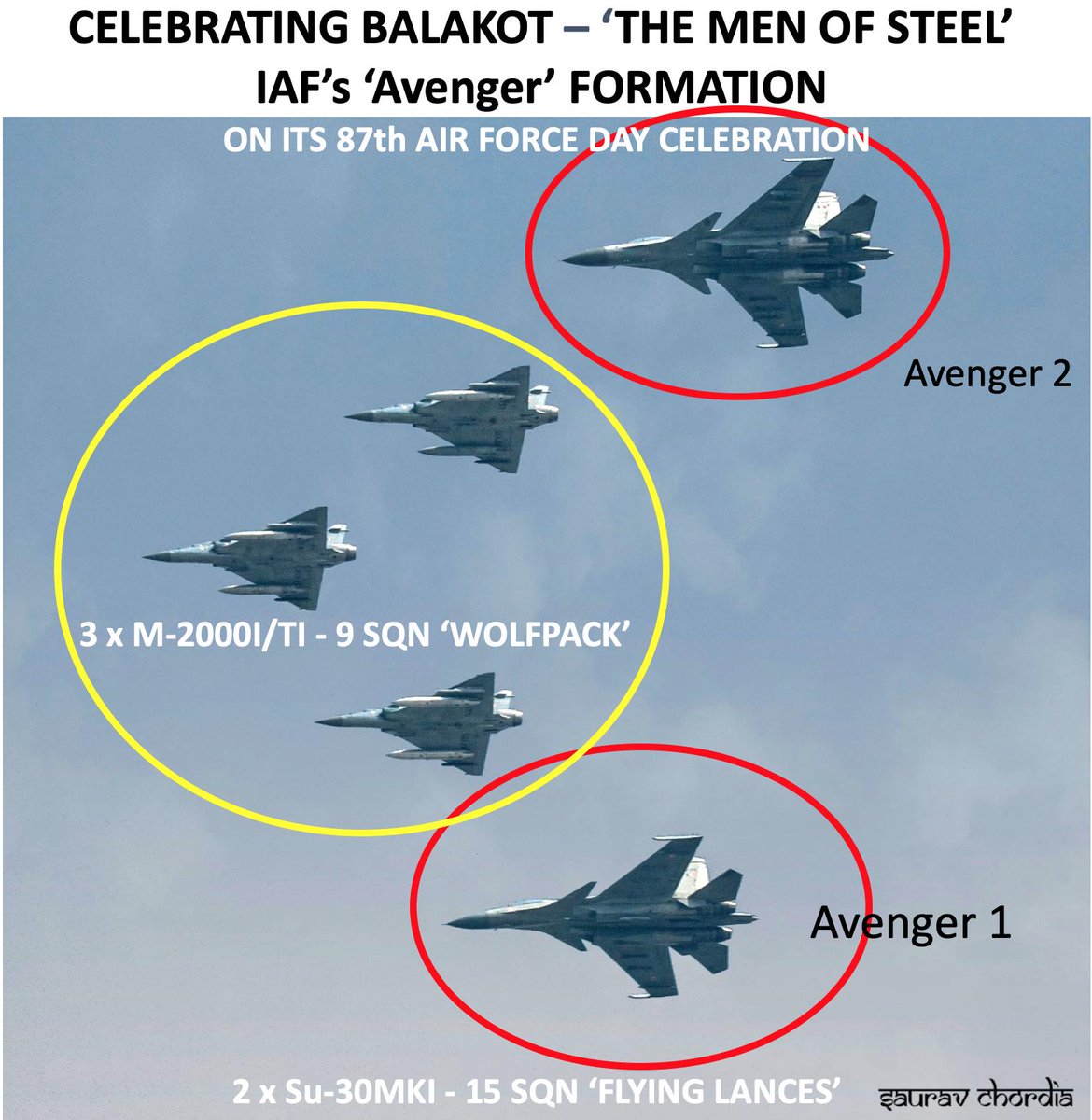 Some pictures from the first Rafale delivery to the IAF 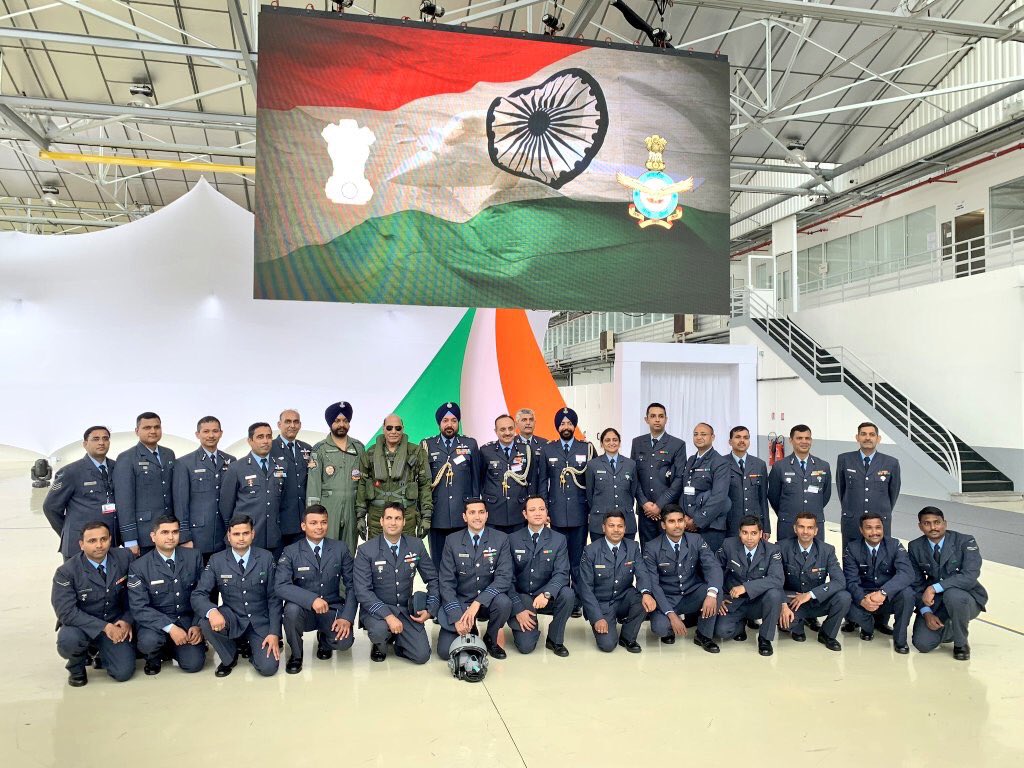 IAF pilots and maintenance technicians training on the Rafale in France, with India's Defence Minister in the flying suit. 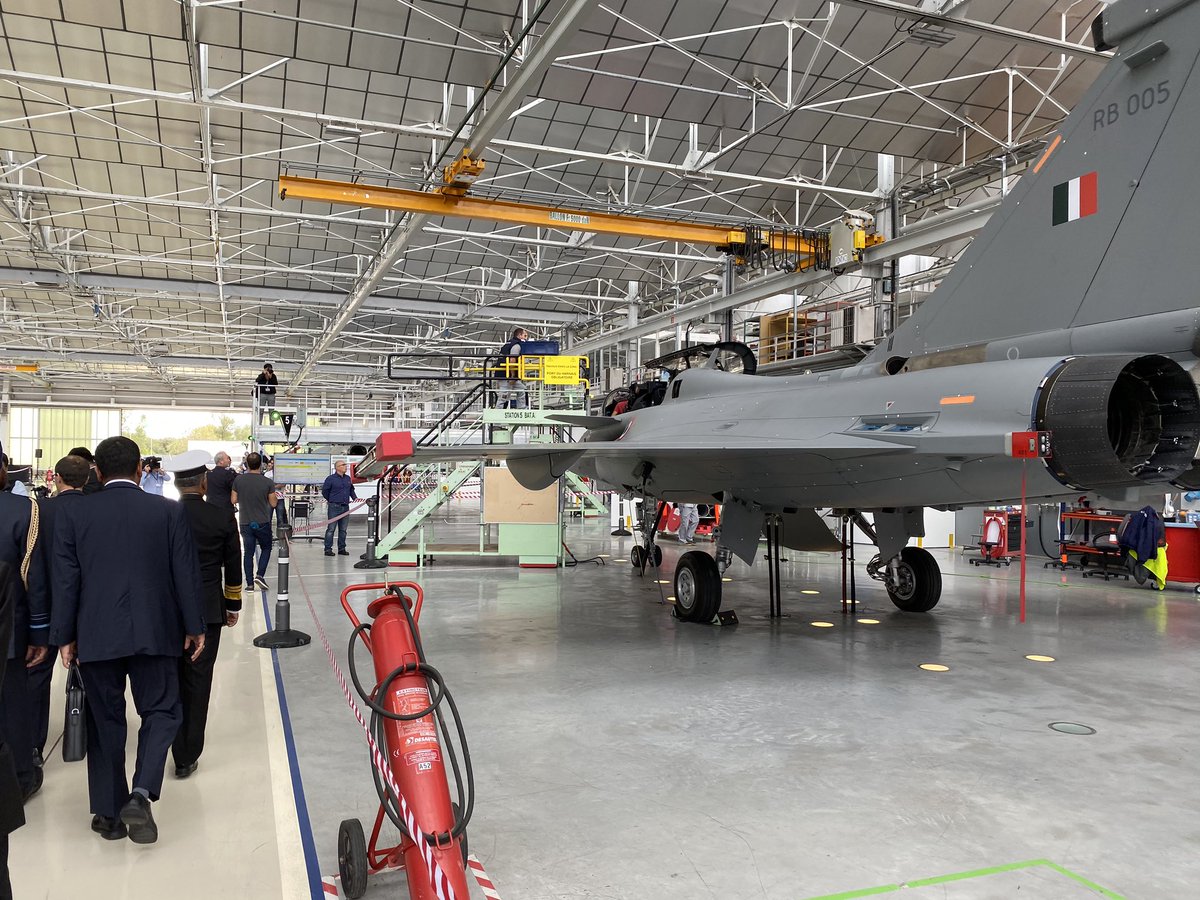 The gentleman strapping in Rajnath Singh into the cockpit of the Rafale is Group Captain Harkirat Singh, the first CO of the No.17 'Golden Arrows' Squadron that will be equipped with the Rafale. Formerly a MiG-21 Bison pilot. 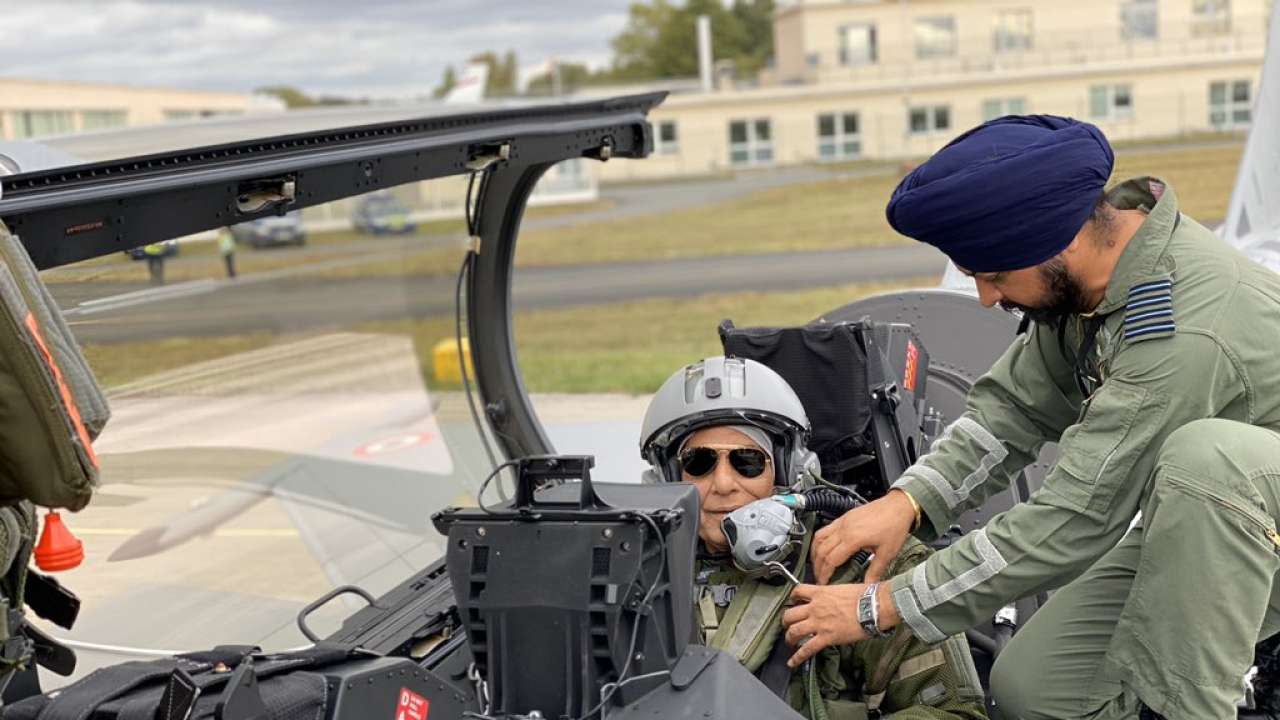 Not quite...call signs are just that, call signs. They can be assigned to any aircraft. Simply circling a photo of a couple of MKIs doesn't prove one wasn't shot down.

The fact that the ndians claim their MKIs had to "dodge" AMRAAMS and the farcical public demo of the AMRAAM wreckage suggests that there is a higher chance of an MKI being damaged at least, if not a bona fide kill. The fact that "Abhi" never managed to get off a missile from his Mig-21 shows the indian claim of him shooting down a Viper is as flat as Abhi's destroyed Mig-21. I'm not saying the PAF managed to definitely kill an MKI, just that the facts imply a higher probability of an MKI being damaged, than a Viper being killed. Till this day, Abhi has never claimed to have shot down a Viper, let alone get a missile off, and how come he hasn't been allowed to talk publicly? Not to mention the fact that the indian failed strike has been independently debunked by a number sources.

The IAF Air Chief Marshal (now retired) BS Dhanoa, before his retirement, mentioned in a press meet that Wing Cmdr Abhinandan confirmed that he had shot down the F-16. Just because the IAF doesn't parade him in front of the press doesn't mean that they didn't debrief him and only then award him with one of the highest military honors.

As for finding all missiles on the Bison, it can be easily staged. I know whom I will believe, just as I know whom you will choose to believe.

the same pilots that participated in the strike and the defence the day after Balakot was struck, were flying the jets on the flypast. India isn't a country where a downed jet and dead pilots can be swept under the carpet..IAF officers have been indicted and held responsible for the fratricide incident that led to the shooting down of the Mi-17. Accountability exists with audit bodies that dig deep, and media cannot be gagged unlike in some other nations.

AFAIK, the IAF evaluated the Mirage F1 during the same competition that led to the selection of the Jaguar. 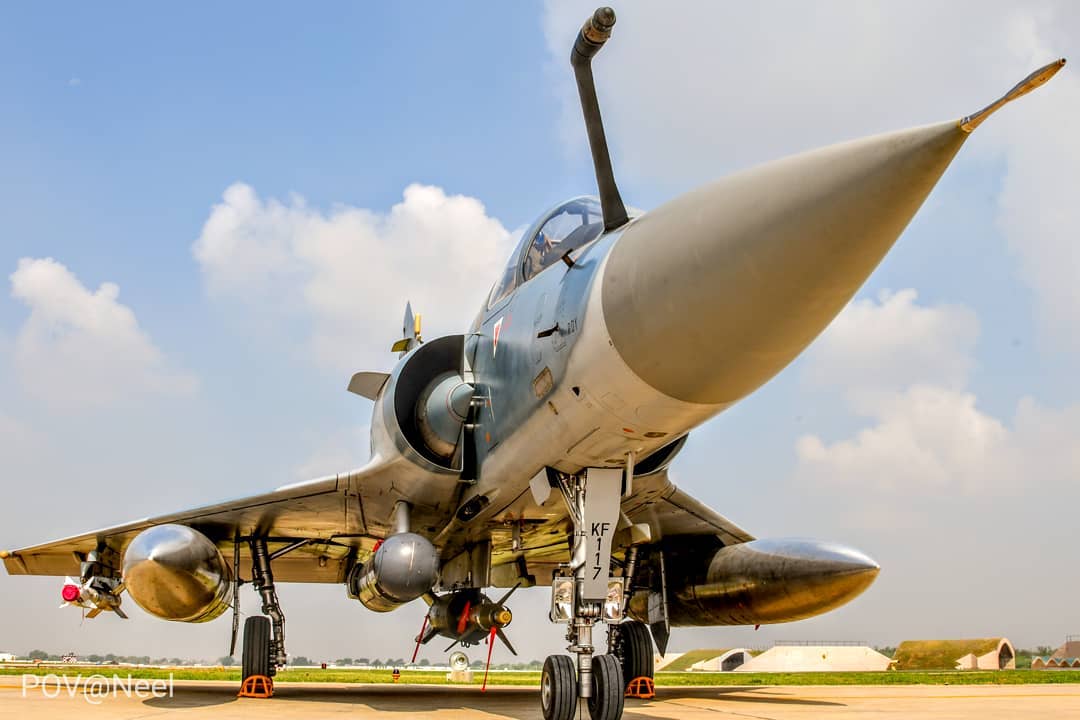 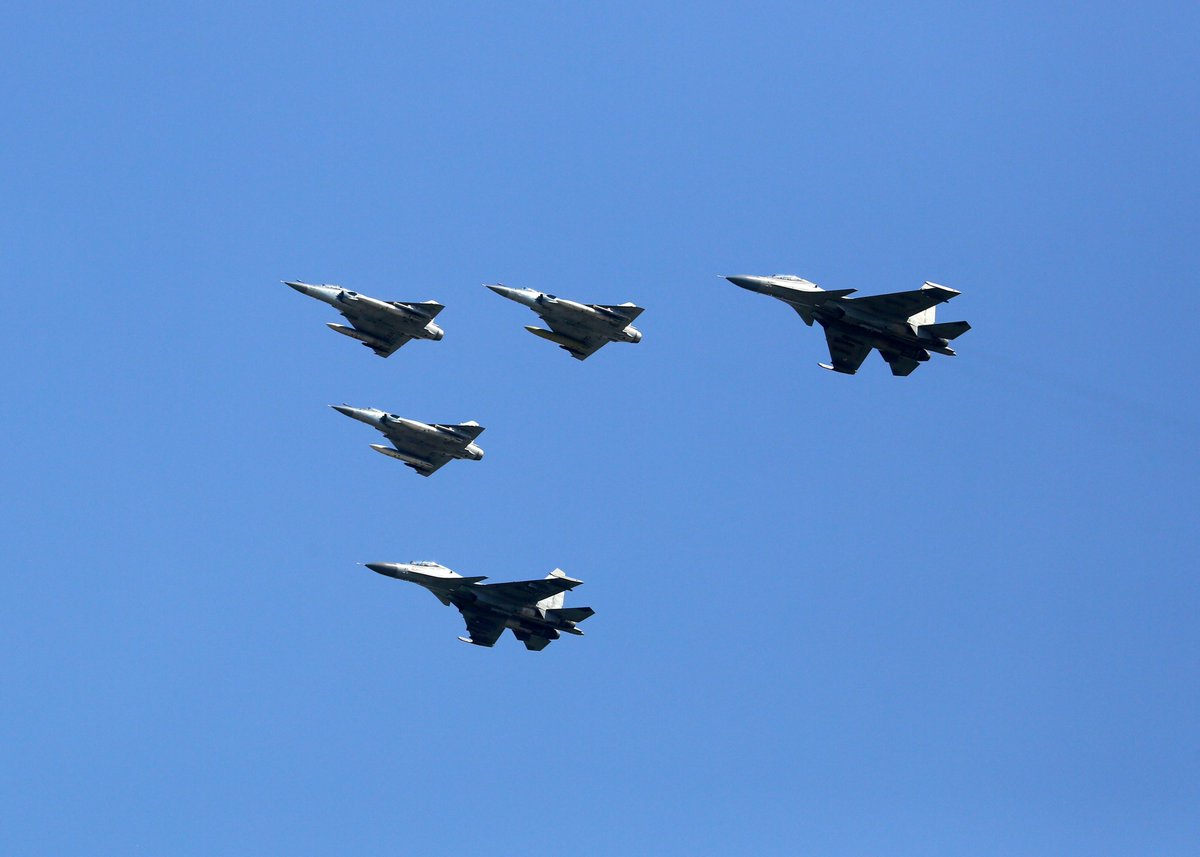 So Avenger 1 (extreme right aircraft), an IAF Su-30 that Pak insisted was downed a day after Balakot ... makes an appearance on Air Force day, apparently flown by the same pilots who were "shot down.'' The IAF provides transparency, what about Pak and Doosra Banda? 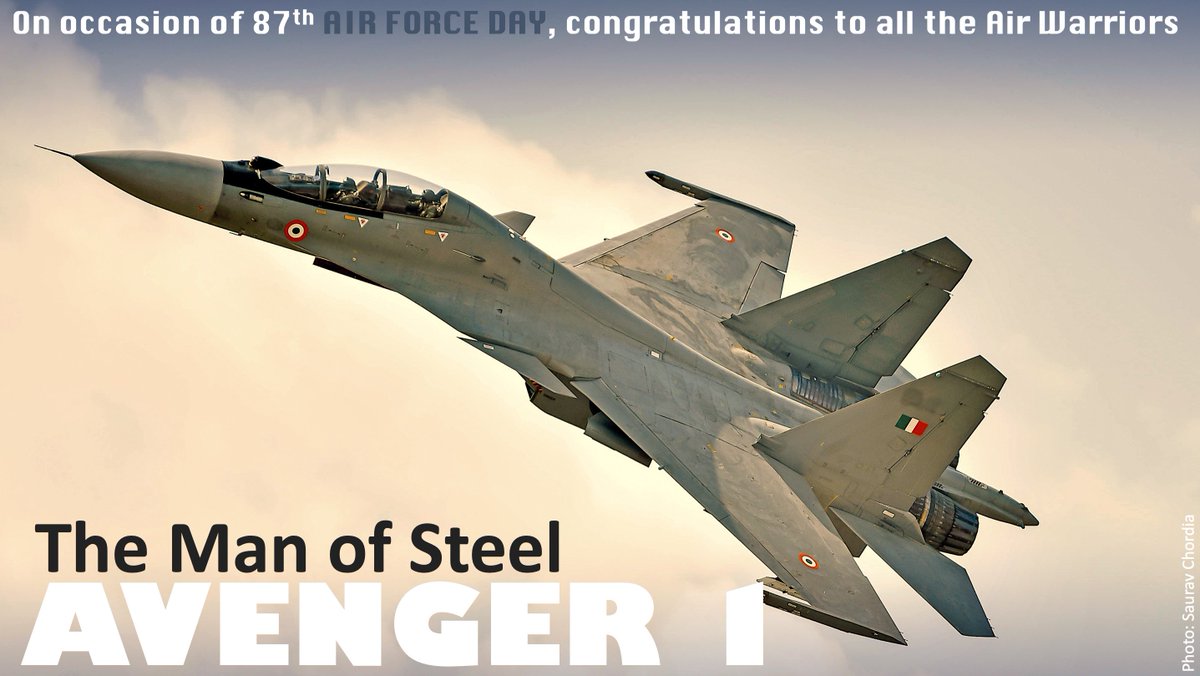 IAF down to 30 squadrons according to the article:

IAF sends MiG-29UPG fighters to Oman for Exercise Eastern Bridge. They'll go up against RAFO F-16 Block 50 and Typhoon fighters. This is the first time that MiG-29s have ventured outside of India for any exercise. the in-flight refueling capability and the added fuel tanks on the UPG upgrade allowed for greater range and endurance to allow for the pond hopping to Oman. Will allow MiG-29 crews to validate tactics and the new avionics and Zhuk-M2E radar will be tested out for the first time against other non-IAF types. 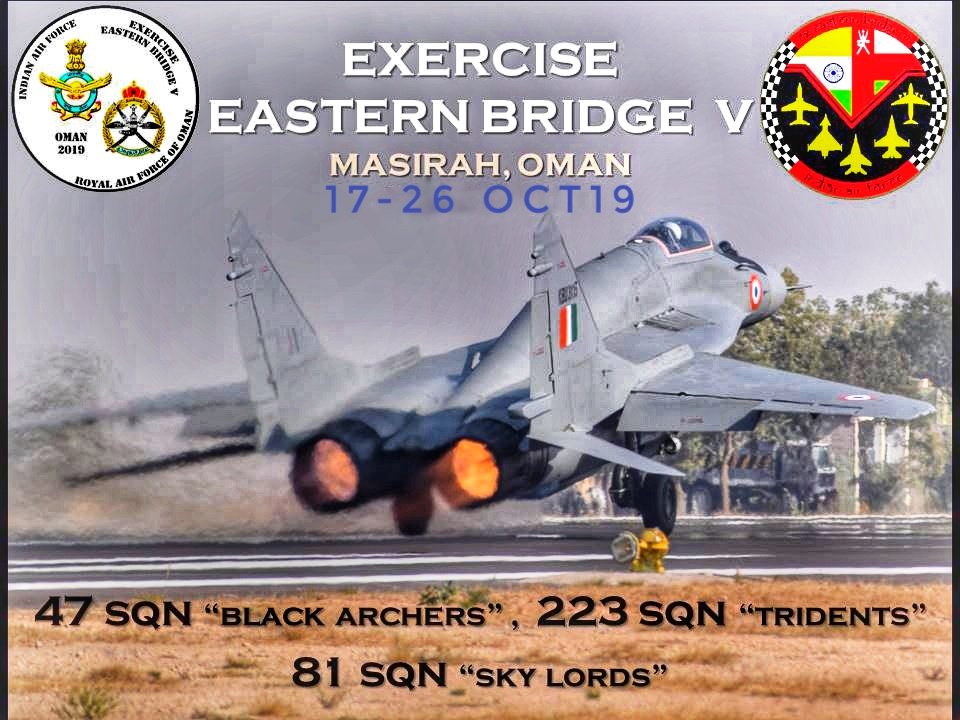 IAF MiG-29UPG in Oman. The jets flew from Jamnagar AFS in Gujarat state of India, to Oman without any refueling airplanes accompanying them. They were accompanied by a C-17 carrying crew and spares but no Il-78MKI Midas tanker. 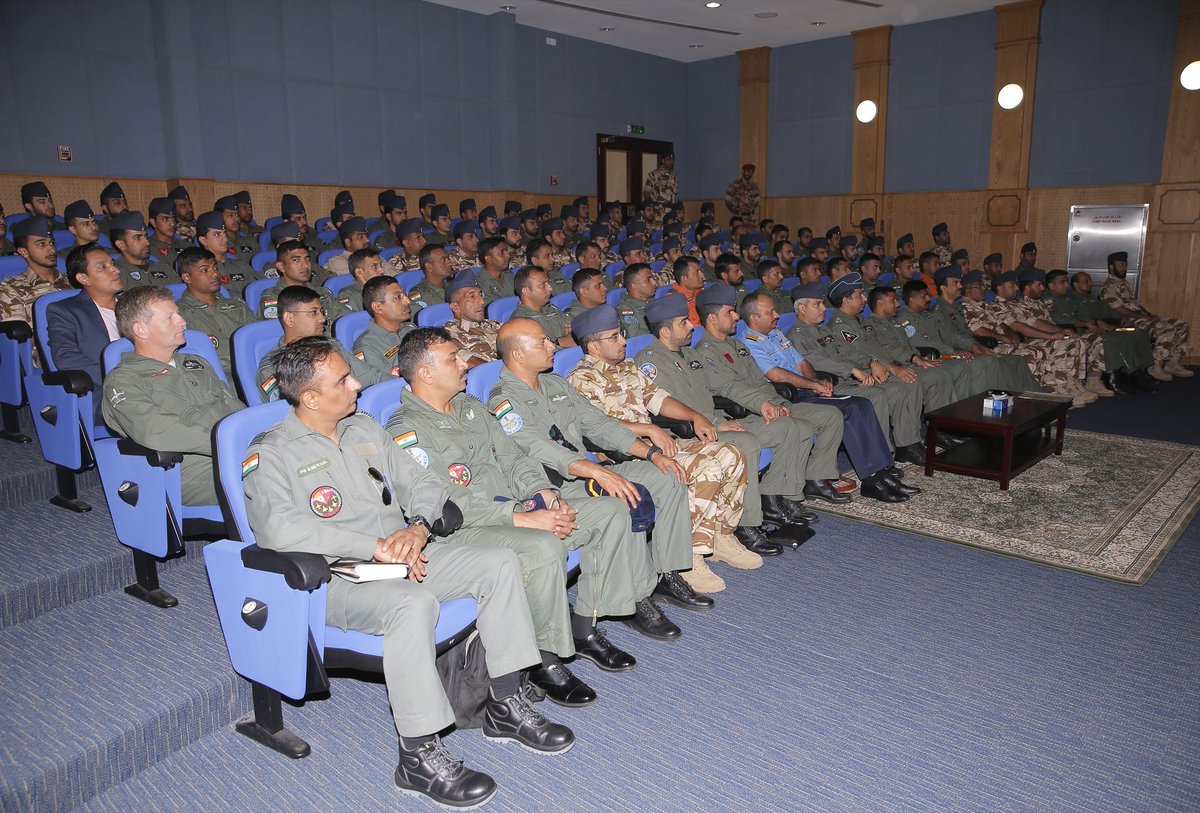 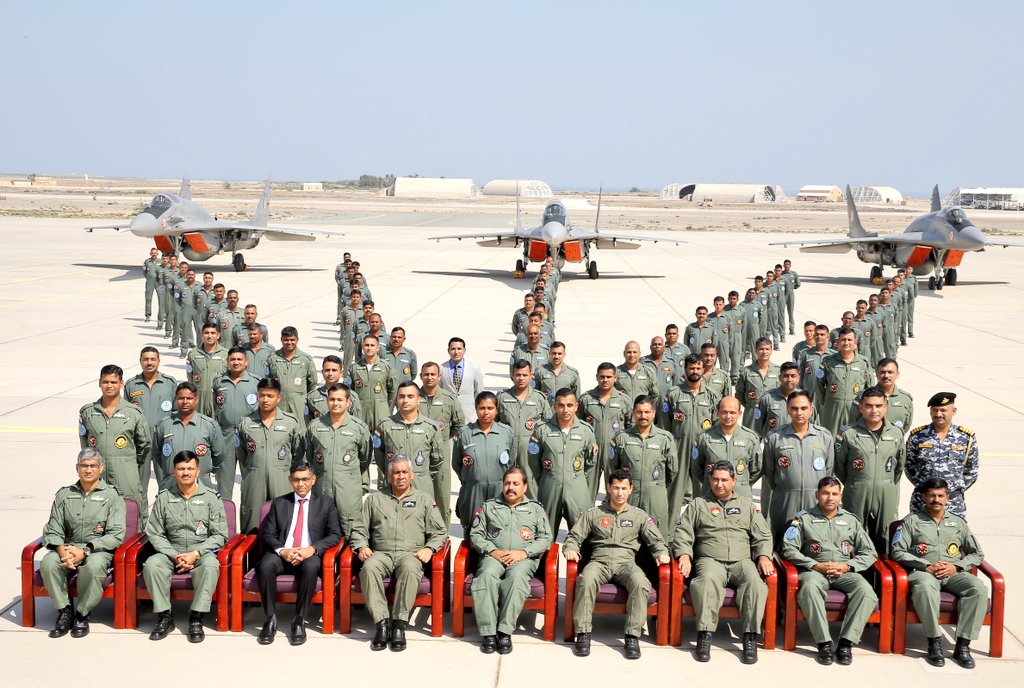 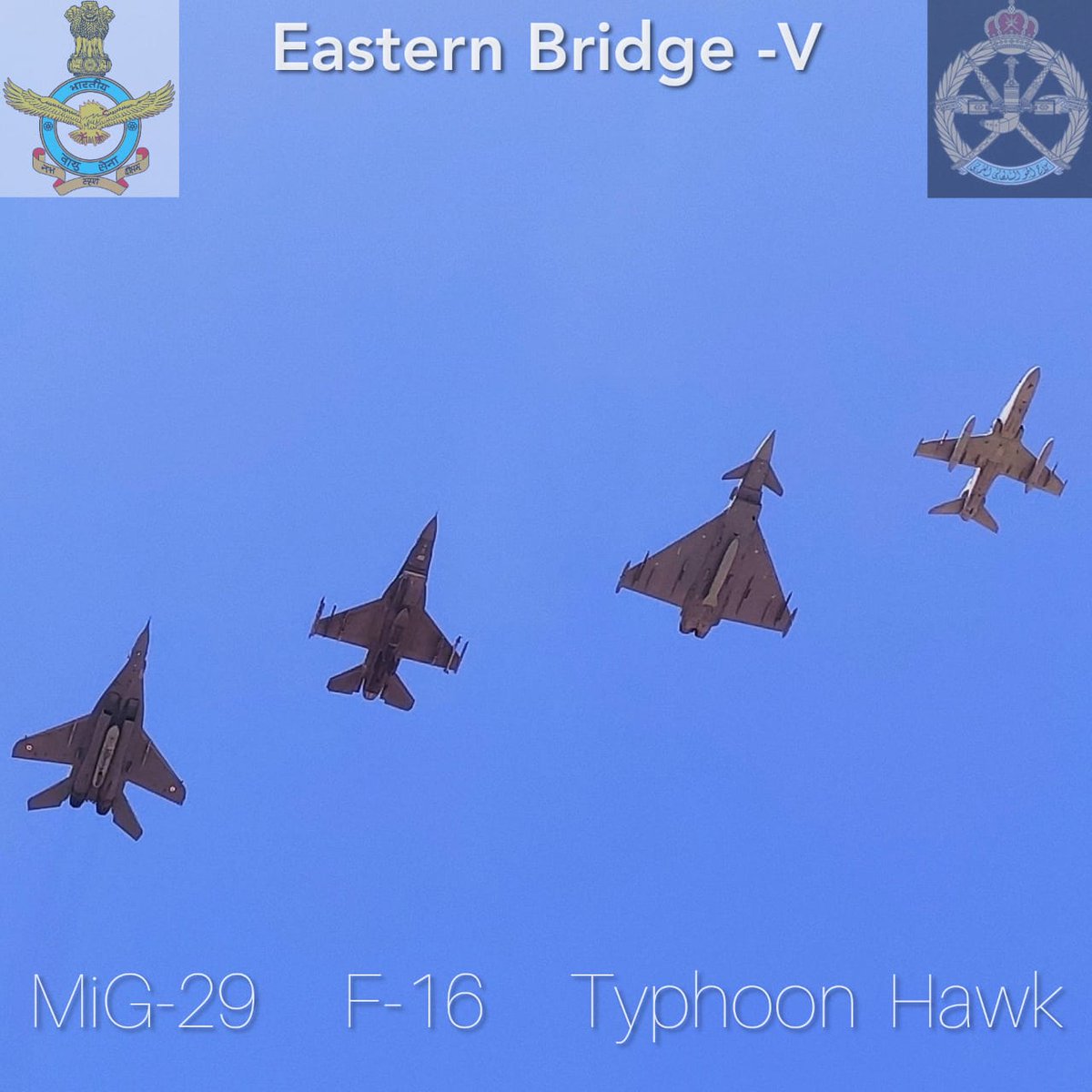 With the IAF Air Chief Marshal having made it clear that the IAF will not pursue any imported 5th gen design, there is now new emphasis and urgency being imparted to the AMCA design.

The writer of this article is one of the best defence journos in India and he has a good track record in terms of being right about things. It is a good read about the current status of what's happening with the AMCA program.

Full article at the link given below.

With the Indian Air Force (IAF) making it clear that it is looking for a homegrown solution for its fifth generation fighter aircraft (FGFA) requirement, the Aeronautical Development Agency’s (ADA’s) Advanced Medium Combat Aircraft (AMCA) project seems ready to shift to a higher gear. To be sure, ADA, which is controlled by the Defence Research & Development Organization (DRDO), has already made considerable progress towards finalizing the AMCA design configuration that will be taken up for full-scale engineering development (FSED). Much work has also been done towards the development of technologies and systems relevant to the AMCA’s design elements. As such, ADA expects to receive a preliminary staff qualitative requirement (PSQR) from the IAF in the coming weeks, which will serve to further inform the development of two AMCA technology demonstrators (AMCA-TDs).

The Expression of Interest (EOI) to build the two TDs was floated back in 2018 itself and has received responses from several domestic firms. However, given that no single player in the domestic private sector can build such a complex system on its own, a consortium approach involving multiple players is likely to be adopted for the construction of these TDs.  In a way, it will be a natural outgrowth of the manner in which major sub-assemblies for the Hindustan Aeronautics Limited (HAL) Tejas Mk1 has been outsourced to multiple companies, with integration, checkout and delivery being done by HAL. Overall, a decision with respect to precisely where the two TDs will be built is expected to be taken up within the next six months at the level of the Defence Minister. Be that as it may, both TDs will be ‘full-scope’ demonstrators in keeping with the IAF’s requirements and will be used to test the entire intended flight envelope for the baseline AMCA airframe design. This last part is subject to the availability of higher thrust engines in the future, as we shall see below.

The Rafale and Tejas on their own, however, will not be enough to solve India’s air power conundrum. The IAF’s present fighter fleet stands at thirty squadrons, of which six are obsolescent MiG-21/27 and one is a fledgling Tejas Mk.1 unit. The force stands to lose at least six fighter squadrons over the next 5 years. Meanwhile, in terms of firm contracts, the IAF will add a total of only six new squadrons over the same time frame — three additional Su-30MKI units will be raised by 2022, the first of two Rafale squadrons will stand up in early 2020 followed by another in 2020-21, and a second Tejas squadron will probably be established in 2020.

If there is not a big delay in delivering the Tejas FOC batch, there will be a big break in LCA single seat deliveries starting next year. I suspect that the 80 or so Mk1A aircraft will not be ready to go into production for quite some time.  I understand that, almost unbelievably, the order for 83 has not been signed yet.

The solution seems obvious to me: order and knock out another 30/40 Mk1 single seat FOC aircraft to allow retirement of more MiG's. Of course lack of planning may mean there is now insufficient lead time for the supply chain to produce components fast enough to continue assembly without a break. Same old story of being too slow, too indecisive, too late.

3 Rafale jets handed over to the IAF- Govt.

Three Rafale fighter jets have been handed over to the Indian Air Force and are being used to train IAF pilots and technicians in France, the government said on Wednesday.

New Delhi’s Defence Acquisition Council gave its approval to a proposed 56-aircraft order for the Indian air force in May 2015. The programme’s first 16 aircraft will undergo final assembly by Airbus in Seville, Spain, with the remainder to be built by in-country partner Tata Advanced Systems.

If they are quick, the deal might go ahead within 5 years of approval!