Here's one for, perhaps, our Australian forum members. Fred Taylor was the designer, constructor, owner and pilot of the unregistered and unlicensed Taylor Wagtail that flew in the Birmingham area from 1938 to 1950. In 1950 Taylor decided to emigrate to Australia and disposed of the Wagtail. It was last seen in 1951. However Ord-Hume says that he moved to Mount Gambier, Southern Australia, where he built a second Wagtail before his death in 1984. I have failed to find anything about an Australian Wagtail or to substantiate Ord-Hume's contention. Has anyone else come across anything relating to this?

Someone down under must have read this. I can't believe that no-one knows anything. I continue to live in hope!

Now then-when I were a lad (now 80) I tried to follow up the history of the Taylor Wagtail and I remember hearing the story that it was displayed on the forecourt of a garage/ petrol station on Moseley Rd Birmingham. So I recall I jumped on a bus or two to follow up this lead. I think that I found the garage but when I enquired about it I was told that it went into disrepair and it was eventually broken up and bits were buried. So I drea a blank. Anyone got a picture of it?

Just to give this zombie a further push....

He lived and built it in Clare and possibly passed away at Mount Gambier. 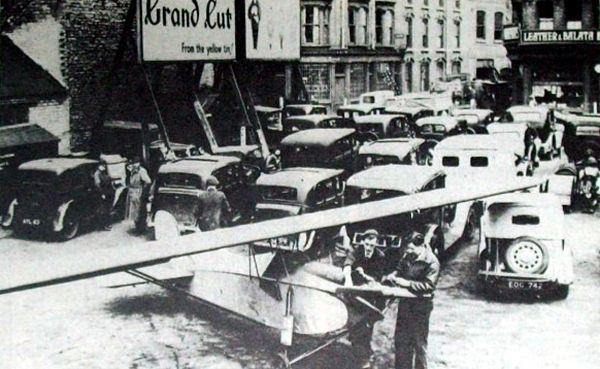 The car under the port wingtip is a 1939 Series 6 BSA Scout - my best guess at the reg dates it to spring 1939. So I would guess this is a pre-war photo as there are no post-war looking cars.

Fred Taylor was a bricklayer from Perry Common, Erdington, so I would assume the initial building of his aeroplanes would have been from his house there. I do not have an address.

He designed and built three aircraft, firstly in 1935 the Taylor A101 Bedstead which was started at his home before moving it to Dunton Hall Farm for assembly and first flight. So it did fly, but not well.

He improved it by adding a new propeller, engine and redesigned streamlined nacelle. This was an improvement and called it the Taylor B102. His third build was the Taylor C103 and was named the Wagtail and flew well just before the war. All the flights were from Dunton Hall farm which was 3 miles ENE of Castle Bromwich airfield, just off the Kingsbury Rd, near Sutton Coldfield, RH side going away from Brum.

The aircraft were all built with unapproved materials, so could not be officially registered. The Wagtail ,last built and shown in the photograph regularly flew up to 1948, and visited Castle Bromwich and Elmdon. It was believed sold to a Arthur Harrison a Birmingham insurance broker, and then to a councillor Bevin. It was also believed traded in for a car at the car lot.

The aircraft was burnt sometime after the photo but n

Sorry Avion Ancien but I have no information on his Australian build, this is more information for rapide66 and feroxeng

my great grand father did build more planes in South Australia. it had a number d104. the Bristol cherub engine out of the wagtail is in the Rolls Royce heritage centre in Bristol. it still works and is on a test rig. my nanny was his eldest daughter and was interviewed for a quarterly magazine in the 90s

I'm working from memory, the hour being late, but I think that I discovered a good deal more on this subject post 2018. I'll try to look through my material, over the next few days, and see if I can add to this topic.

That of which I was thinking, yesterday, was an article entitled 'The MMAC Fliers and their Aeroplanes 1933-1993'. I have a copy of the article as published (Air-Britain Digest 1994) and a partial typescript (pp 28-36 which, I presume, is from the draft of the article). It deals with Fred Taylor's Australian aeronautical adventures as well as his earlier adventures in the Birmingham area. If you haven't seen the article, Simon, and would like to, send me a PM, with your e-mail address, and I'll send you a copy. Also I recollect that had correspondence with someone on this subject, at about the same time, but I can't now remember who that was or find the exchange of correspondence (that's not uncommon these days but probably I'll find it eventually).