I can add to my earlier post on Sheppard's published accounts of the incident involving F/Sgt Copping and this P40.

I do agree it is too early to jump to conclusions but after seeing the GPS location and were the LG is in relation I am pretty sure it is him.

1) Copping was flying this aircraft the night before and nearly put the landing gear through the wings on landing. Landing into the sun and late evening he may have had problems seeing the strip and nearly crashed this a/c. Hence the locked to u/c the next day.

2) Copping left the next day without Sheppard and headed south of the LG with his gear locked down as the AMEs had done so in order to fly the a/c. I recall Sheppard leaving 30 mins later and caught up to Copping. He flew along side him on both the starboard and port sides trying to contact via R/T and hand signals, the flew in front and dropped his gear. Copping didn't follow Sheppard to the east and continued flying in a S/SW direction. Hence the aircraft being were it is, nearly due south of the LG.

The published events don't and may never reveal what really happened and they may not even appear in his RAF records. Remember Hanbury was killed a while after this accident over the English Channel. Only his surviving family have access to these accounts (if they appear) and are held in the AHB.

with respects to the Form 1180s that Andy eluded to. I have attached a copy of Spitfire X4492 that crashed in the UK during photo ops. Just and example but they do include the engine type and serial number. BUT remember these engines only had a lifespan of 40hrs and were ofter swapped and never recorded on the RAF Movement Cards, but in the a/c logs that I guess were not found on board? It is also unclear it this P40's crash card included the engine included at the factory or any others that might have been swapped in. Let us hope these engine serials help up ID this aircraft if the factory plates don't

Happy to hear this hit the papers and that a search and recovery is going to happen. I am haunted by those photos of that chute however. I recall being told that if these guys went down in the desert or anywhere else YOU stay with your a/c.

Anyone have access to the RSU logs to see if a search or mention of the crash?

The recording of the engine number on the 1180 for what is supposed to be this aeroplane is certainly encouraging. However, if it is not Coppings aircraft (and ends up being a combat loss) then there will be no 1180 since these were exclusively to record accidents, not flying battle occurrences.

Yes the number is hand stamped on the Left Lower longeron and will consist of the Ship Number (please note that this is not the Constructors number, but is something called the ship number which was used for tracking on the factory and against the required total of aircraft to be built under contract and of that type....hence these ship numbers are reused). This isn't the only place where the ID may be, there are other not so well know places to look (will not say where online to give a fighting chance that the plates will still be there when someone goes for the information).

The other issue will be making sense of that number, as not all things were built in Sequence with P-40's, I know of cases with C/N's being used twice, and Serial number and Ship number match ups not being in Sequence, and these cases actually happened quite a bit, on top of ship numbers being reused (as I said they are just a factory checking number).

When there is no C/N or serial number plates, the actual identification of the aircraft is going to be quite interesting, as Ship numbers are not on the Form AM78, 1180 nor on the USAAF IRC for the aircraft, or any shipping documentation I have seen. This leaves just the Curtiss Factory records as the only way to positively 100% identify the aircraft, however if trying to do that, you need to find the Model Number (luckily we have this), the Ship Number (fingers crossed they'll find a plate or take the Dyson out to go for the lower longeron), and finally the Actual Curtiss records (the factory records for the Buffalo line) must be found, then you have to find the actual aircraft you are after. This is not something that will happen 2 mins after the number is known, might take a bit longer for 100% confirmation to come through.

As to US serials on RAF aircraft etc. Only the P-40E-1CU and onward have both a RAF serial and a USAAF serial. Before that all aircraft had an RAF serial only for RAF aircraft, and a USAAC serial for USAAC aircraft.

Tangmere - The engine number may be stamped into the engine heads, but this is not something I have seen before (but am no expert on the Allision), and additionally you have the problem with Allision engines of having both an Allision number and a FY number just to really confuse the matter, plate wise. However in the case of ET574 one of the actual engine numbers is on the Loss card which will be of great assistance should it come down to a Engine match only for ID.

Gentleman,
With regard to build/lot numbers which may help in identifying this airframe, I have attached a photo of a russian wreck which I am trying to identify its serial number. The desert find may have a similiar number, hand written in the inside of a fairing which would help confirm its identity. These hand written numbers were to identify parts for a specific production line number for a specific production order. In this Russian wreck photo, the number 343 is written. This aircraft I beleive was from a British Kittyhawk order which was forwarded to the Russian Air force. As interesting as this desert find may be, any help in identifying my wreckage serial number would be greatly appreciated.

I have left a message with AHB regarding the info stated and will also have to find the son's book which is somewhere at home. Had forgotten I had that one. Additionally, the son is on my list of people to talk to so will try to speak to him tonight to let him know about the P40 and if there is any additional info he might be able to add.

Whether Hanbury's log books or other records survived. As he was travelling back from the middle East, I don't know. must be something to cover the book.

Have you got 260Sqn records and does it confirm Copping undertook a hard landing the night before?

On the 28th the squadron record confirm he left and flew 240 degrees instead of 110. The P40 definitely hit in a directly southern direction at the end of the flight.

Sheppard indicated they flew off together and it would be the norm to fly in pairs at least and especially with damaged aircraft.

I hope to see the Wing, Squadron and RSU records on Saturday to see if they add any additional information.

Your part is marked:

The part you have is an inlet assembly, appears to be the left half of the left hand assembly. There are four similar but unique pieces, left and right halves of the Right Hand assembly, and left and right halves of the Left Hand assembly. Yours is marked “-2” so those 4 parts will be “-1”, “-2”, “-3”, and “-4”. They will come from Assembly Parts List #21399. I have a searchable database that can give the part and related information, but I won’t be home for another 10 to 12 hours so that’s all I can say for now. I’m sure Buzz or one of the more knowledgable guys will be along before then, but if your question is still unanswered when I get back I’ll look it up and post the results. Welcome to the forum.

I can't see any clues with regards to serial numbers on your part.

DC,
Thank you, I would agree that those are indeed part numbers as you've mentioned and not serial numbers. The handwritten #343 is number in a specific production run. Many times parts were produced in a shop distant from the production line itself and had the specific aircraft to which they belonged, hand written directly on the part itself. I am speculating that the 343rd aircraft produced in a specific RAF purchase order would yield a specific serial number for this particular wreck. Those part numbers indentified by the stencil, would be same on every aircraft.
Cheers,
John

Many aircraft accumulated hand written or stenciled marks on their parts while in the field undergoing maintenance, repairs, etc. Often these parts were swapped or robbed from other aircraft or wrecks with little or no documentation in order to get a plane back in service as quickly as possible. Aircraft being relocated in a hurry would be a prime candidate for expedient repairs and parts taken from aircraft that can't be flown and must be left behind. These field marks can yield some great clues or even positive ID, but they often have to taken in context with the total find. In general, parts were made to be interchangeable and were simply taken from bins and pallets in the order they came up on the assembly line. I'm having a hard time thinking of a part from this era that was serialized to go with a specific piece. After assembly they often acquired these marks in the field but anything could happen after that.

This aircraft is known to the RAF and this site was visited by them many years ago. It will all come to light in due time.

If, as you say, this aircraft was visited by the RAF "many years ago" it seems astonishing to say the least that nothing was done, then, to identify the aircraft and its pilot. Or was it?

Who visited it, when, and why?

Now filtered through to the Heil

Reasonable article with some outstanding pictures there. I wonder if the data plate on the tail plane will correlate with the aircraft serial number, you can see it is still in place top right.

Now that one will disappear too LOL.

I think that's a light? 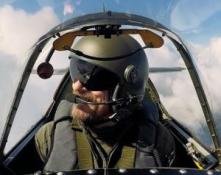 Ah I see! I doubt that has the constructors no# on it?

DC,
Thank you, I would agree that those are indeed part numbers as you've mentioned and not serial numbers. The handwritten #343 is number in a specific production run. Many times parts were produced in a shop distant from the production line itself and had the specific aircraft to which they belonged, hand written directly on the part itself. I am speculating that the 343rd aircraft produced in a specific RAF purchase order would yield a specific serial number for this particular wreck. Those part numbers indentified by the stencil, would be same on every aircraft.
Cheers,
John

have you found any of the small airframe plates on the aircraft. Or at least a Model H-87/P-40E-1/P-40M etc

That way we may have a chance to ID your aircraft

Ah I see! I doubt that has the constructors no# on it?

No it won't, but it should have a serial number for the horizontal stab, so they may be able to match that to the build.

'Analysis of the wreckage shows Flt Sgt Copping, from Southend, Essex, tried to fix the engine and spent several nights under his parachute.'