Work has begun on the wings for this British flying Mosquito. They are currently raising funds to get a flying Mosquito back in the skys over Britain. Look up The People's Mosquito on facebook or via google. They will have a stall at the 3 Lancs event on the 2nd Sept, look them up and make a donation to help with this fantastic project.

Maybe all the previous threads on this subject could be merged so that the panoply of views so far expressed can been seen together and so that the contrasting nature thereof will be apparent to the viewer?

I think most of us are playing a 'wait and see' game with this one.

I've been following this on Facebook - have I missed the announcement about them starting to manufacture the wings?

They have commissioned some wing ribs, to be absolutely accurate.

Here's the salient page - cost of cut ribs is £50K, and they are fundraising to meet that:

So they've raised just over £3k towards this £50k in something over three months. It appears that they have quite a challenge ahead of them.

The whole project whilst eminently commendable is also a huge challenge as the latest post suggests. I agree with AA - merging the other thread would give the overall history of the project and add to the understanding of the endeavour.

Indeed, if they want to get it in the air within 5 years, they need to raise upwards of 100K per month. At the current rate, humanity may well have died out by the time the propellers are ready to turn.

However, I do note that they are planning to get out there, and start to attend airshows and the like, so perhaps things will start to tick up a bit.

Indeed. At least if they have a tangible project in progress they may be able to build some credibility and start attracting sponsorship and donations.

This project might have a better chance of success if it were more ambitious - with a real target, such as the nearly-complete Mosquito in New Zealand. Buying a tangible Mosquito for the nation might get bigger contributions flowing - rather like the Vulcan - rather than trying a scractchbuild/dataplate job which will take many years to complete.

They held talks to buy Glynn Powell's Mossie but the deal fell through because of their lack of money!

That one's always a killer !

Speaking of that killer, I asked them on Facebook how much has been raised so far:

"Our fundraising total is in the region of £125,000 currently. Over the past two months we have raised an average of ~£500/day. Still a long way to go, but we are making good progress. We plan to provide more info on our fundraising in the near future. With the air show season coming to an end it will give us time to analyse our progress in more detail than we have been able to do during what has been for all of our volunteer board members an extremely busy few months. Our club membership is now approx. 750, of which over 80 are Life Members. Our last weekend at Duxford produced around 40 new members. Great to see the amount of support that we have."

The recent thread here about the number of flying warbird around the world told us the UK is home to:
27 Spitfires
8 Hurricanes...and
numerous Sea Furys, Mustangs, P-40s, Buchons, a Corsair and who knows how many Tiger Moths, Harvards, Stearmans....

Clearly, there are many warbird owners in the UK with a lot of money.
Why not ask two Spitfire owners to sell their aircraft and go together to buy a newly restored Mosquito similar to the two in the U.S.?

This fund could be used to "prime the pump" to encourage (bribe is such an ugly word :)) them to do so or to buy a project/bits and pieces to give the new airframe an identity.

I'm not being critical of this laudable effort, but suggesting an different way to achieve the same goal.
I'm just leery of a loosely/volunteer community funded effort that will, in all probability, be under funded to meet operating and maintenance requirements. Aeroplanes are expensive to own, operate, maintain, store and insure. I'm not sure "passign the hat" is a sound way to operate a money intensive piece of kit.

To be plain, can we avoid a perpetual funding crisis with dire predictions of what will happen if money isn't sent now!?
We just suffered through years of that with the Vulcan...with dire threats of scrapping it or it leaving the country in respond to vague offers from Americans.

The owners could each have an engine to call their own, and with two seats, they could both fly in it and be treated like big shots at various events. :)

I'll put my helmet on and await incoming fire. :)

Our fundraising total is in the region of £125,000 currently

In August 2014, apparently £3000 had been raised. By my calculations, to date this project has raised an average of approximately £40,000 per annum. Its website states that its budget for the project is £7,000,000. If its fundraising continues at the present rate, I calculate that they it will have raised the necessary sum by 2192. Unfortunately I will not then be around to see it fly.

There is no established resale market yet for the Mosquito as a type. So anyone who ploughs the money in from the start is not necessarily looking at a return but purely wants to own and fly a Mosquito. Most other single engined warbirds are easier to operate financially and have known resale values. 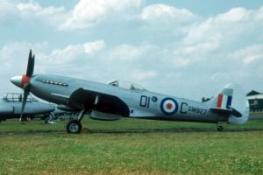 This project might have a better chance of success if it were more ambitious - with a real target, such as the nearly-complete Mosquito in New Zealand. Buying a tangible Mosquito for the nation might get bigger contributions flowing - rather like the Vulcan - rather than trying a scractchbuild/dataplate job which will take many years to complete.

Change the goal/business plan to purchase an almost complete aircraft, shrink the timeframe, and potential investors will gain a tangible quick return on their efforts.

Hi All,
dcollins103,
What about scouting out museums who find it hard to stay afloat, would welcome an injection of cash and are willing to part with their Mosquito ?
so long it passes any tests to examine whether or not it would be a viable candidate for returning to an airworthy status ?.....:confused:

Change the goal/business plan to purchase an almost complete aircraft, shrink the timeframe, and potential investors will gain a tangible quick return on their efforts.

I'm guessing this is the plan of the new Pathfinder Mosquito group, with their aim of raising 750k by end of year/early next which is clearly the price of remains of DZ to kick start the project.
That's a lot to raise in such a short time, but, I agree, the best way to do it....probably the only way to do it....as unlike the Peoples Mosquito, there's something visibly tangible to see early on, rather than just a data plate dug out the ground.

I asked on Facebook, after the TPM person posted that spiel, how long they've been fundraising. No answer yet. Perhaps they guessed what I was thinking.

I've never seen any photos of the parts that make up DZ542 but as it's one Glyn was collecting I expect there's much, much more for MPT to work with than RL249. Considering TPM isn't even restoring their aircraft to its original state surely they'd consider a different airframe? Even if they still don't have enough for it...

The recent thread here about the number of flying warbird around the world told us the UK is home to:
27 Spitfires
8 Hurricanes...and
numerous Sea Furys, Mustangs, P-40s, Buchons, a Corsair and who knows how many Tiger Moths, Harvards, Stearmans....

How many Tiger Moths, Harvards and/or Stearmans would one need to sell to finance the purchase and operation of a Mossie? I'm guessing the owner wouldn't have quite enough to make up the difference! For that matter, it would take a Biggin Hill (remember that?) or TFC-sized operation to sell off some of its fleet. Then again, I do like the idea of a syndicate or partnership as J Boyle suggested further on.

If nothing else TPM is interesting to follow on social media if you like pictures of a merchandising tent at different airshows during the season.