This might be of interest to the Fleet Air Arm aficionados out there!

These photos were taken back in 1967 by the Ship's Photographic Team.

My friend Barry came by this album when his Cousin, Grenville Burgess otherwise known as "Budgie" or "Budge" served on the Eagle during this time as a Flight Engineer. Sadly, Grenville passed away in 2013.

Barry has kindly allowed me to share these photos. Some of them maybe familiar as these were available for purchase by the Ship's Company but well worth a second viewing in my opinion!

This thread will hopefully serve as a fitting tribute to Grenville and all his FAA/RN mates!

Here's the first batch of six photos plus the cover of the album, feel free to correct or add any additional information.

More to follow in the next few days and weeks if there's enough interest?! 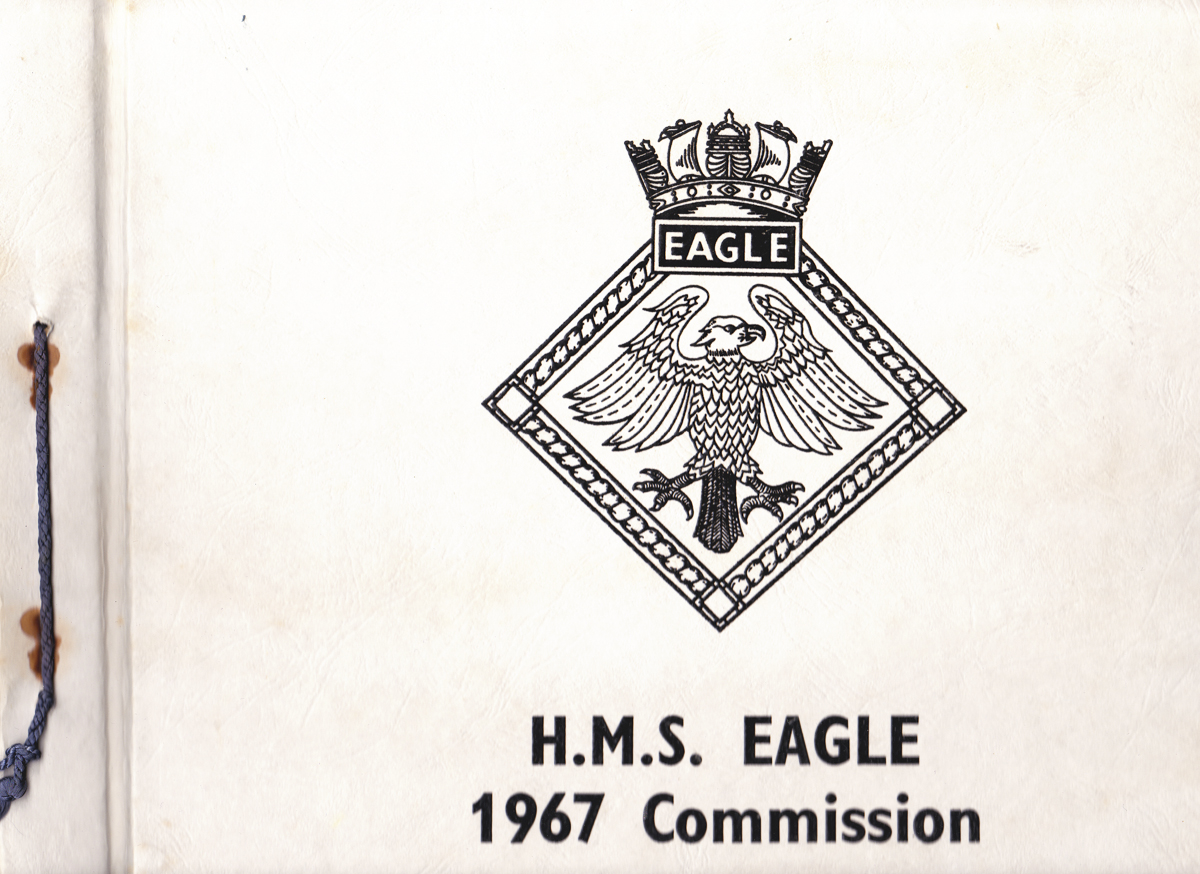 2. Grenville standing in the back row, third from left. 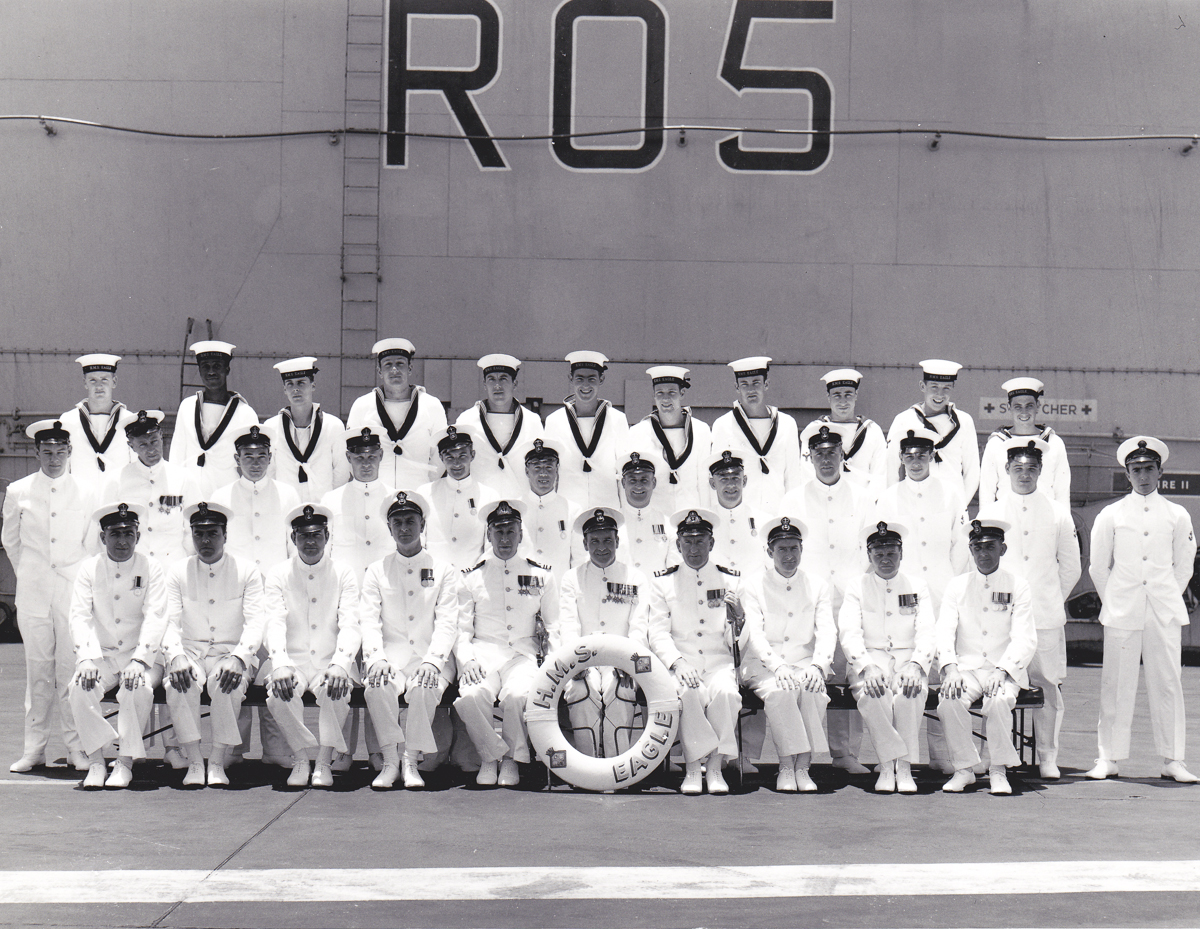 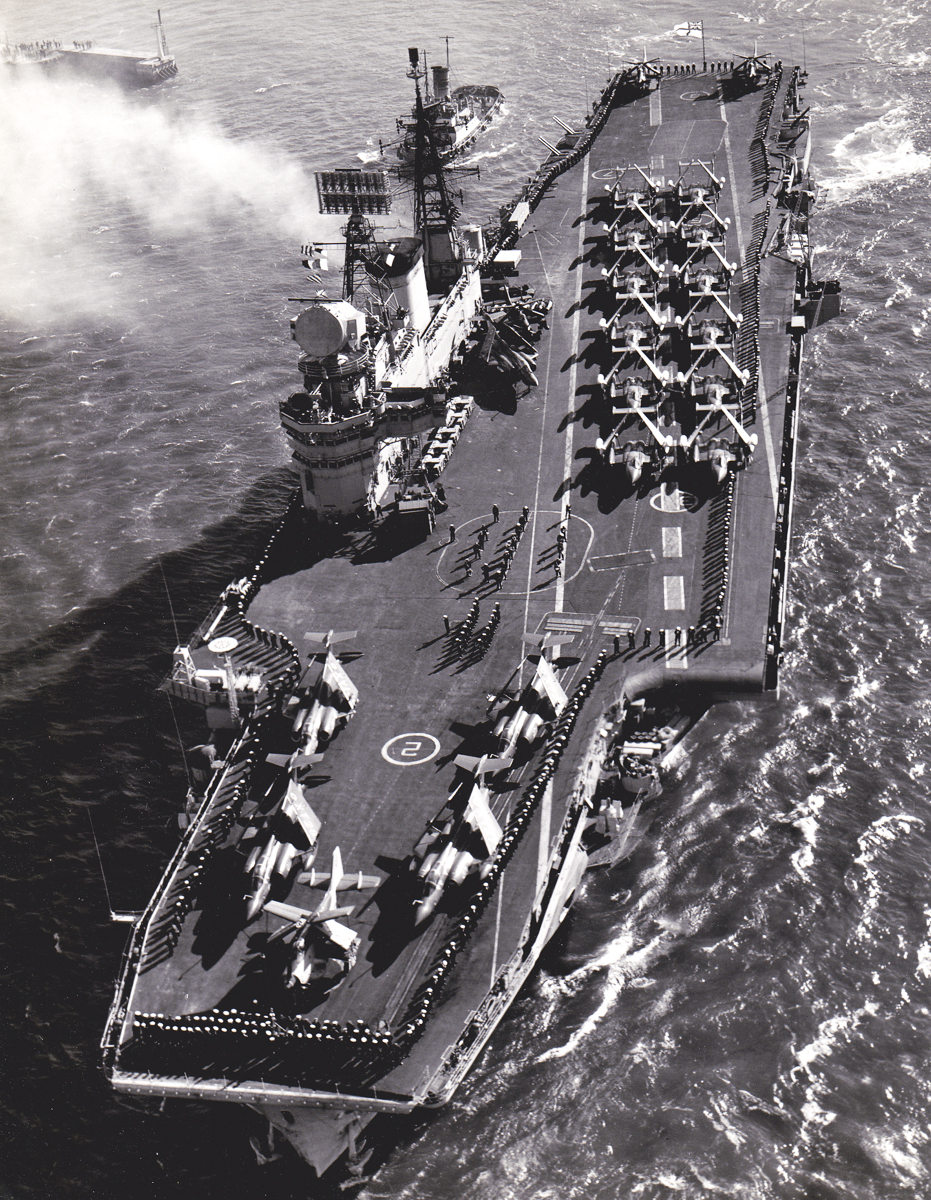 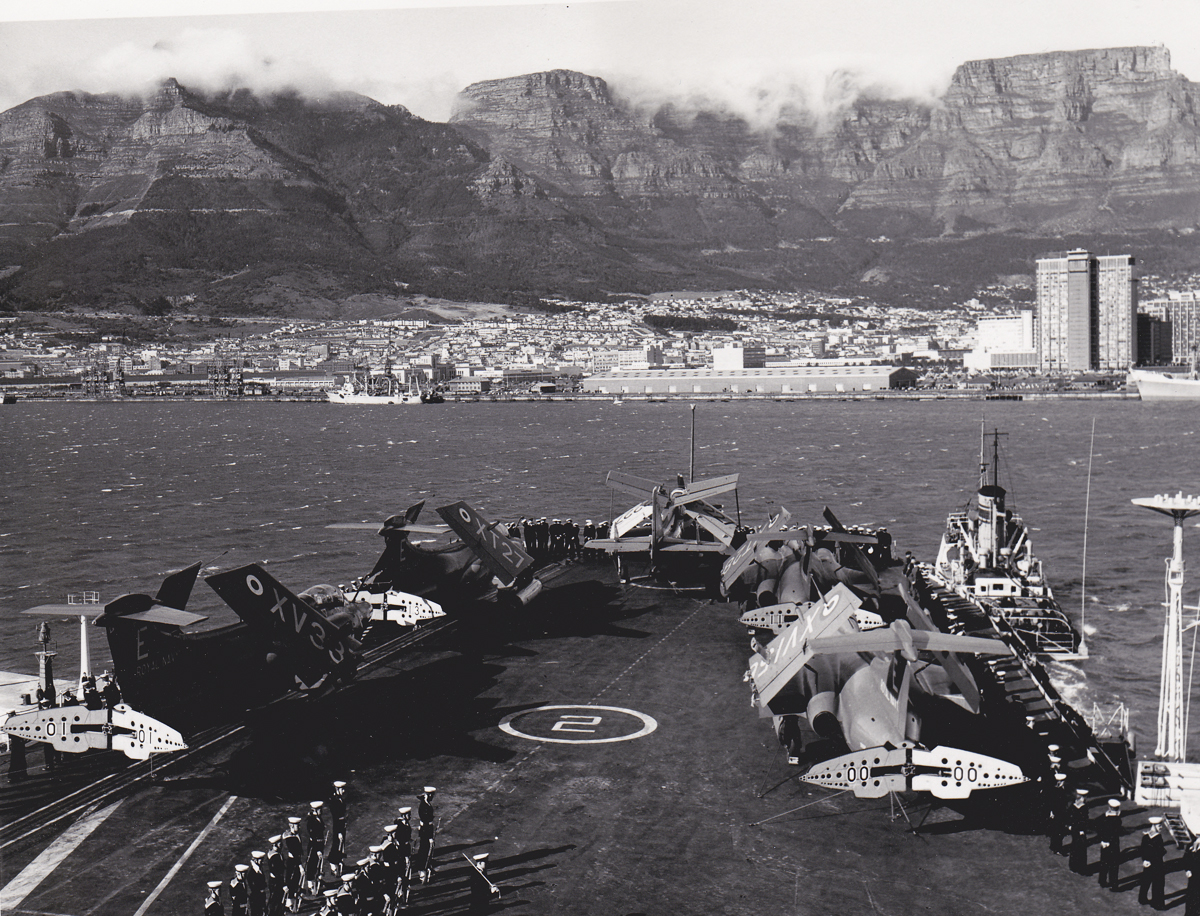 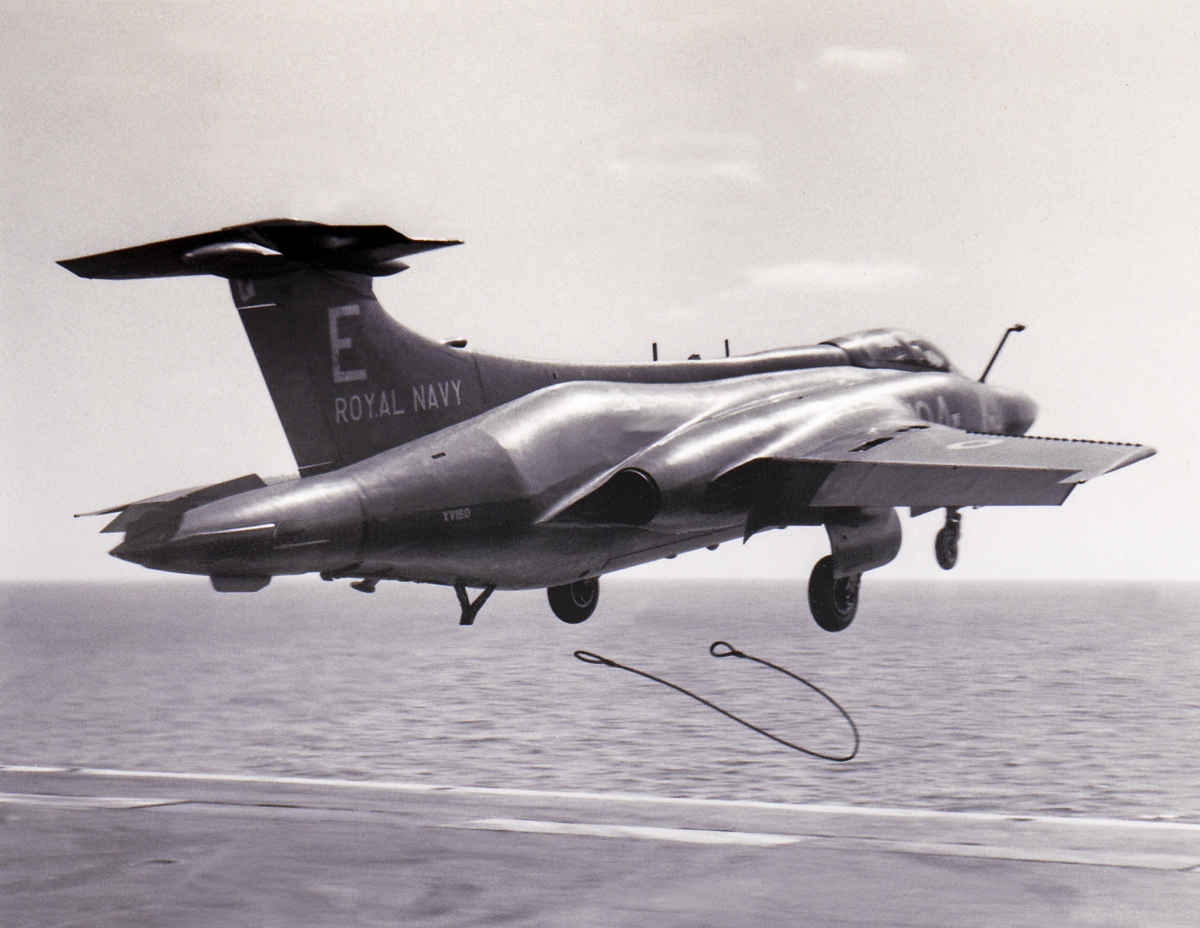 6. Fairey Gannet COD.4 of 849D Flight. Affectionately known as "The Postman" on the Eagle I believe?! 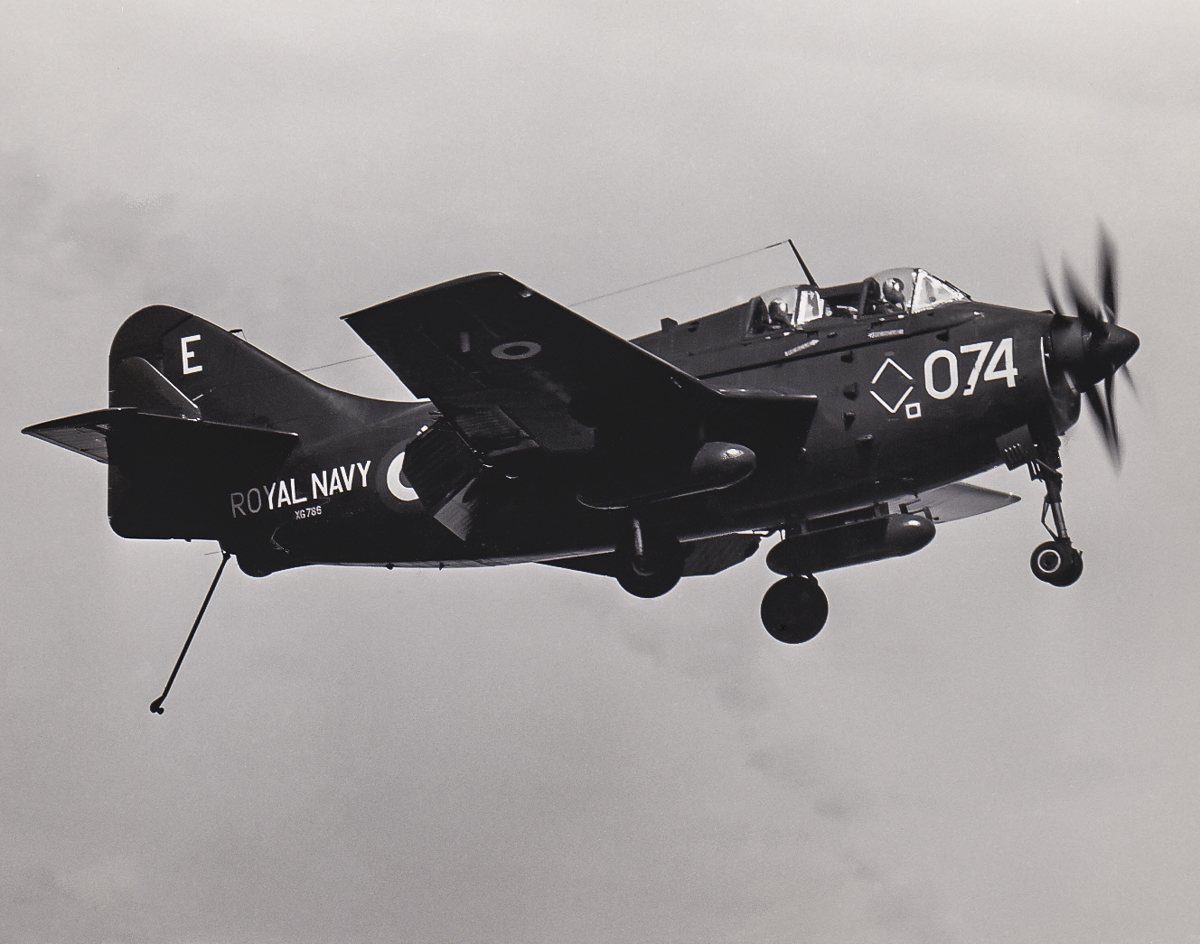 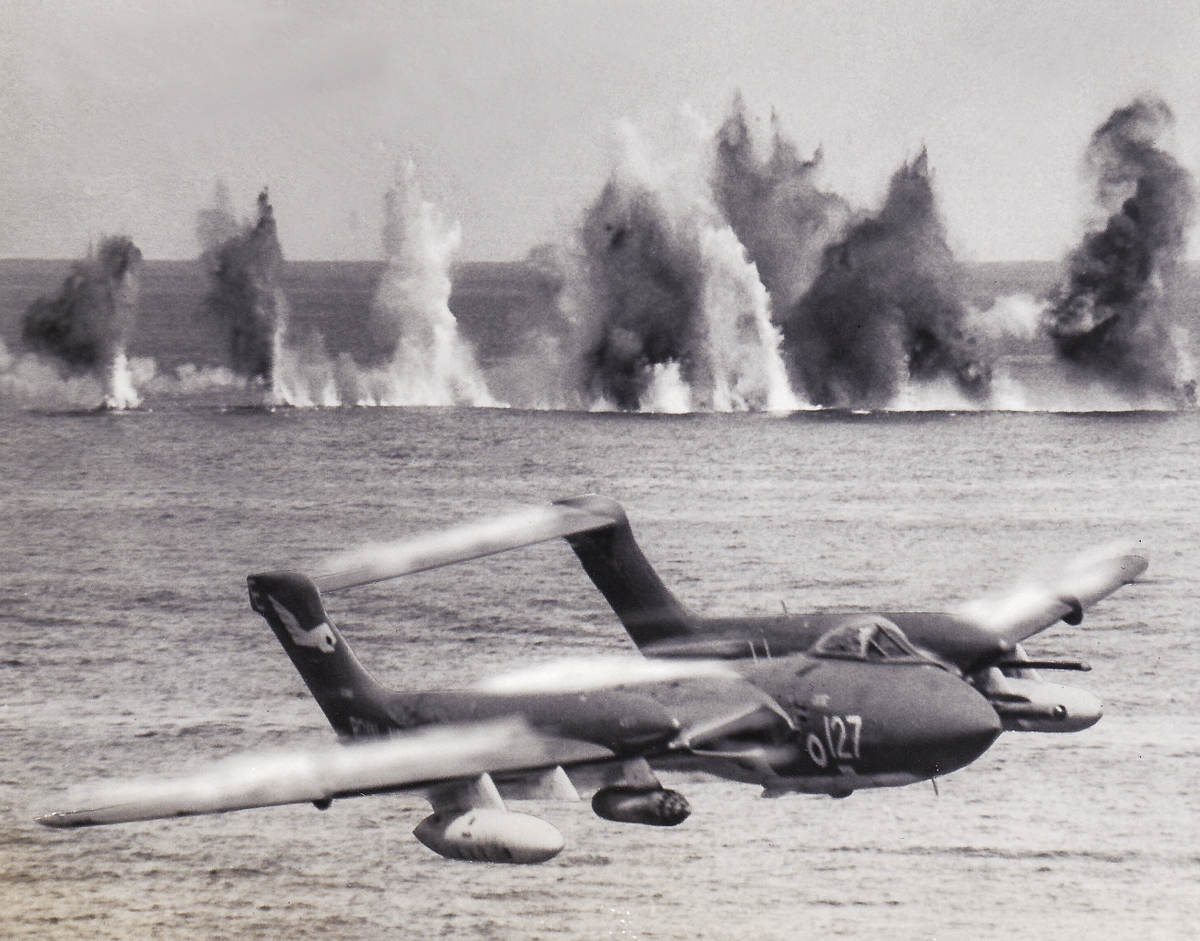 Nice photos, thanks for sharing. 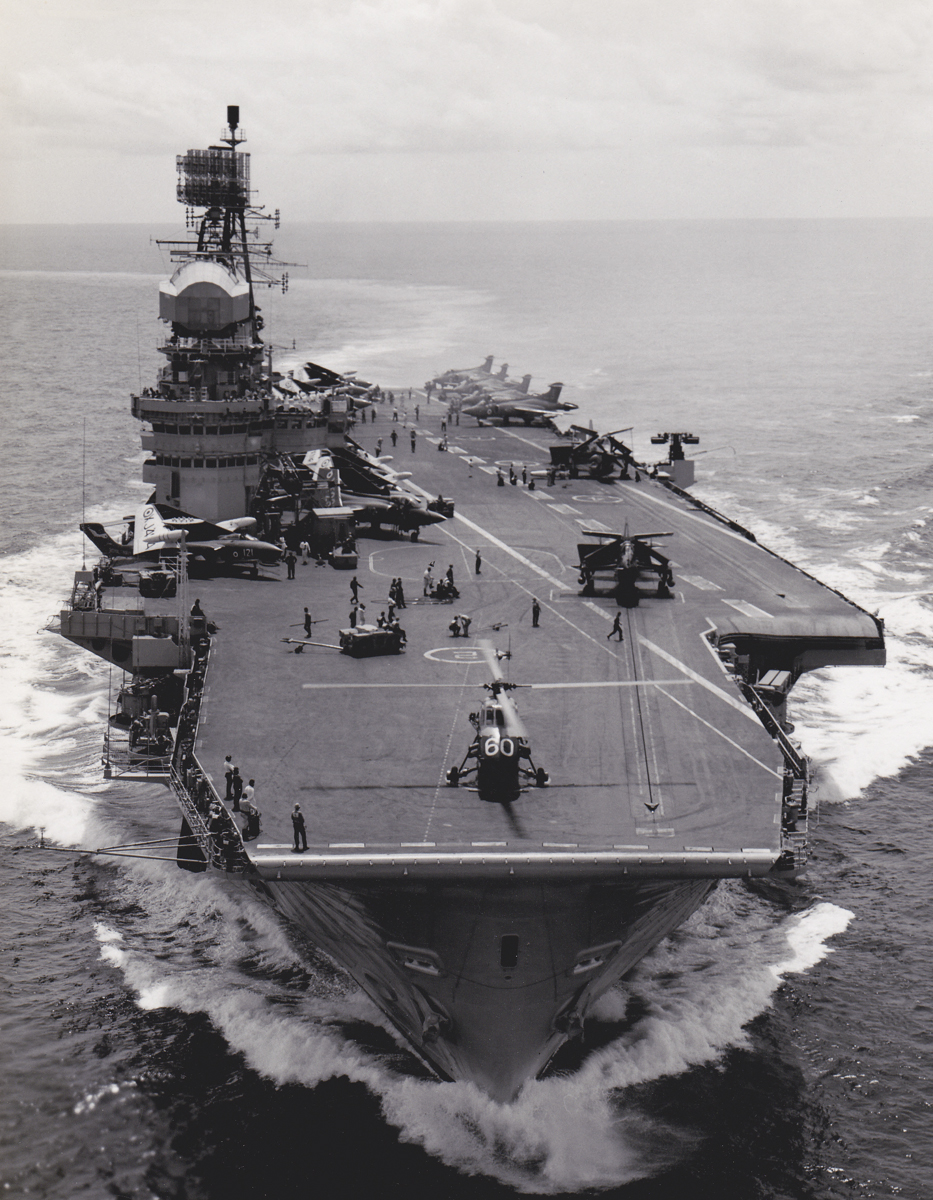 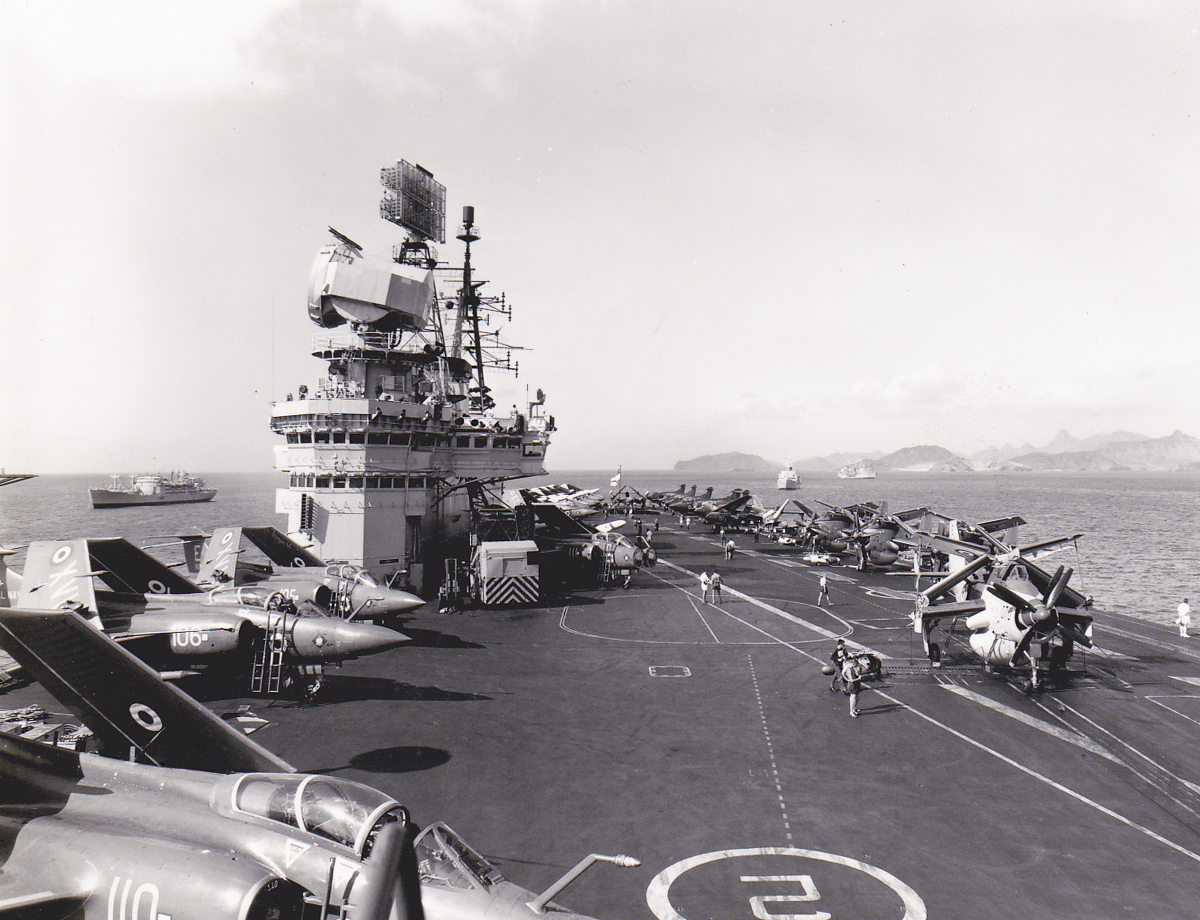 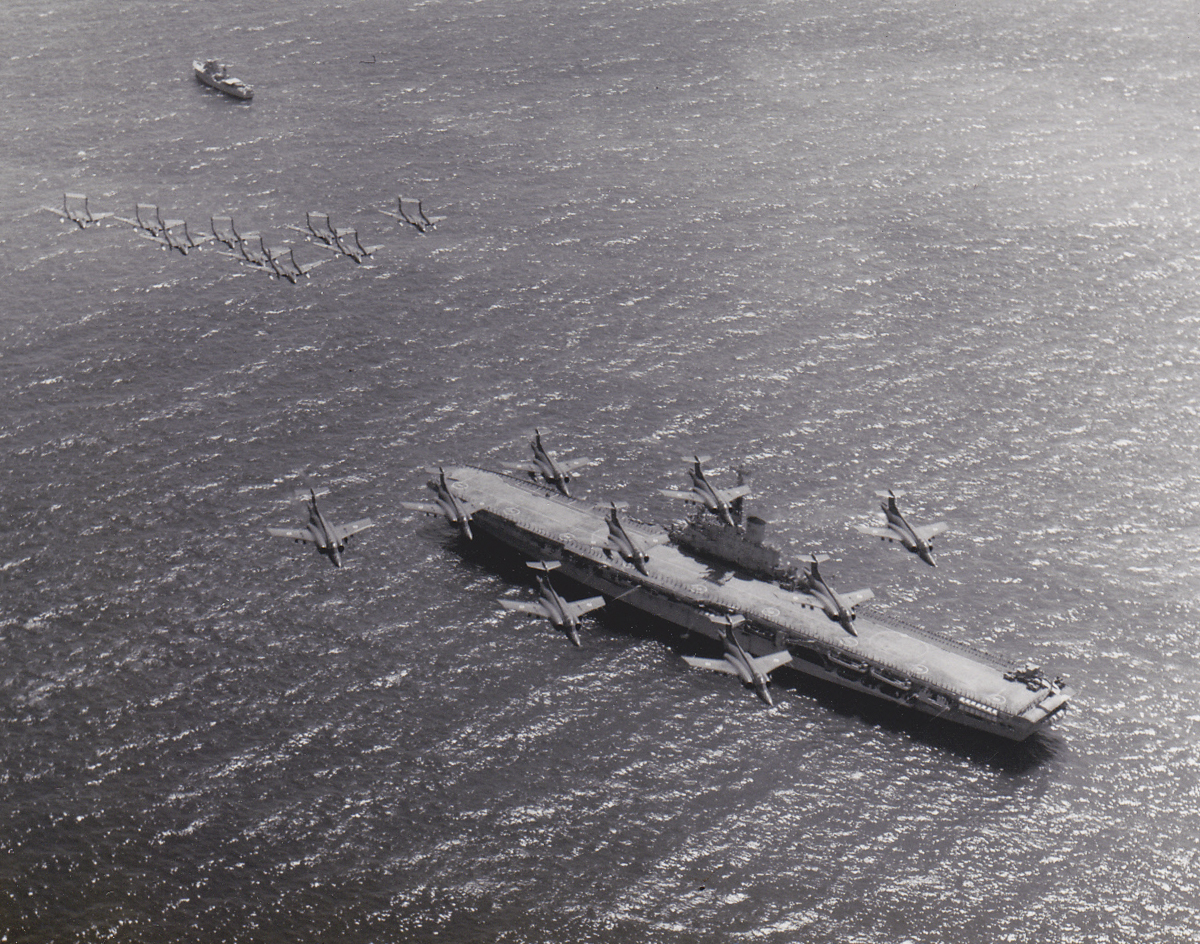 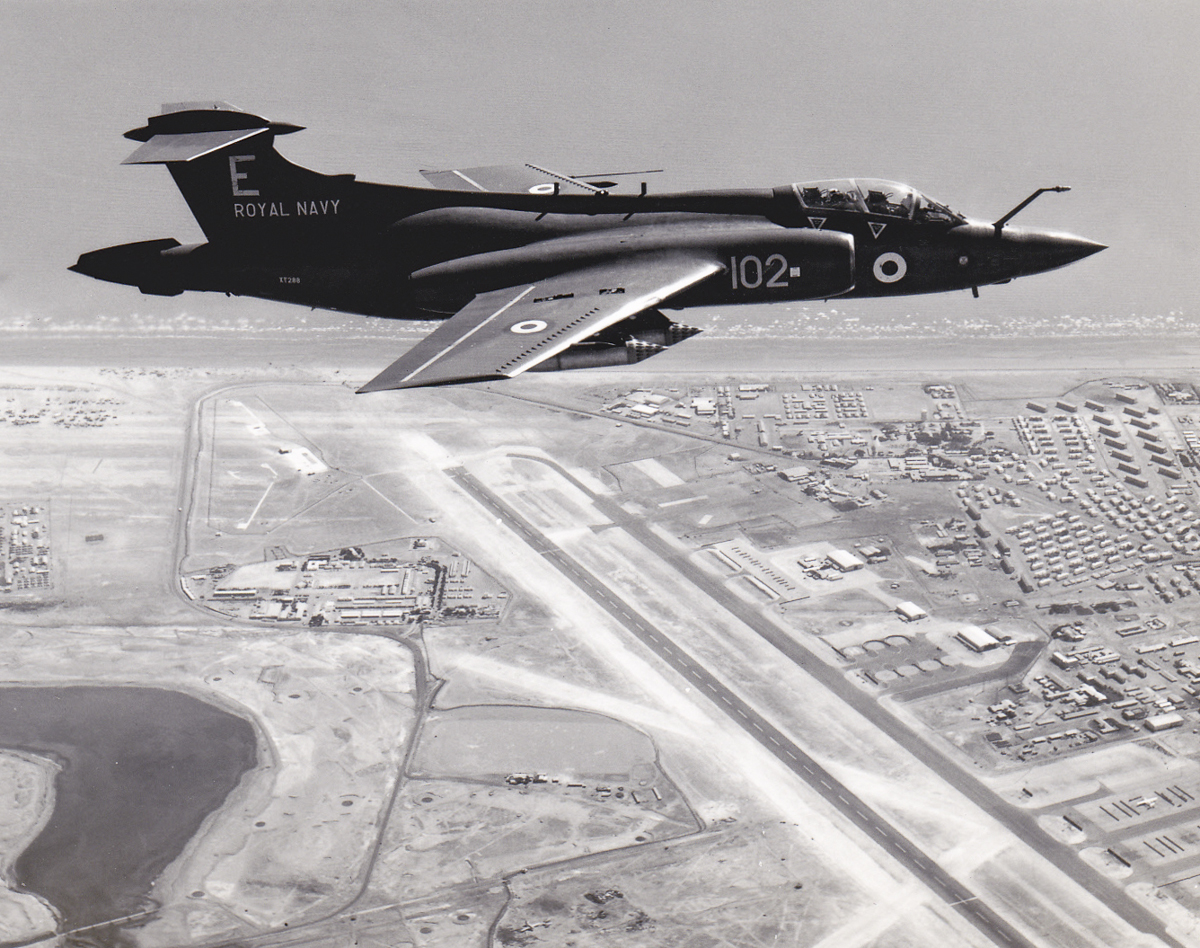 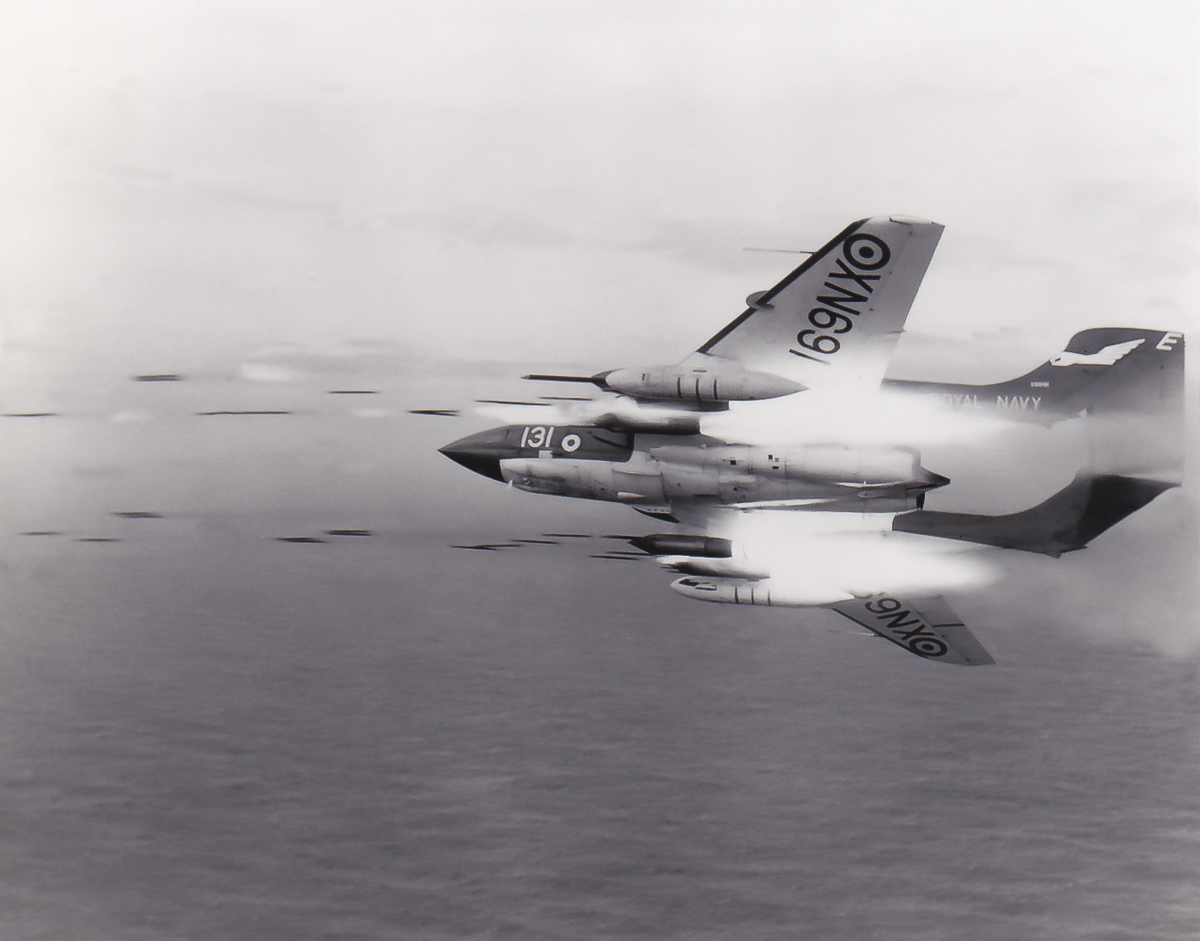 I thought I would show this picture which isn't in the remit of this thread but may be of interest , the person i got it from said they were the photographer on board, I cannot vouch for the information I got.

January 1952, not 53 as in the title, aircraft from 703 service trials unit based at Ford visited Eagle.

A line up you would kill to see now. From the front Sea Fury, Firebrand, Firefly, Hornet, and Attacker right at the back, They were later joined by a Grumman Avenger, apologies for the bad copies, the Hornet supposedly has the code FD on it's tail for Ford where the unit was based. Anyway the second photo is the Attacker crashing off the side part of the wing still Visible.

What superb photos ,thank you for posting them :)

It would be HMS Albion or Bulwark after conversion to a helicopter carrier.

Great pictures! I have a copy of the rocket firing Sea Vixen that I think was from a set I purchased at the FAA museum 20 odd years ago.

Excellent photos of Eagle's 1967 commission. I particularly enjoyed picture 11 showing the Buccaneer overflying the surprisingly sparsely occupied pans of RAF Khormaksar in Aden. I would have been underneath it at the time, not far from the Beverley in the bottom right corner. Usually, the aircraft pans would be quite full as our resident squadrons included Hunter, Shackleton, Wessex, Twin Pioneer, Beverley and Argosy aircraft as well as the RAF's last operational Dakota. Also daily visitors to Khormaksar included Britannia and VC10 troopers from British Eagle, British United Airways and RAF Transport Command, plus many regular scheduled civil flights including DC3's and VC10's from Aden and East African Airways respectively. RAF Vulcan, Victor and Canberra's were also frequent visitors as were a variety of United States and French military types.

I also remember the old aircraft dump seen at the bottom centre of the picture where I recall clambering over a derelict Egyptian Air Force Ilyushin transport and an even older abandoned B25 Mitchell bomber. Going back to the Beverley at bottom right, I was especially pleased to see the lines of 'blast walls' built to protect the aircraft from mortar attack that I and many other 'volunteers' built in the summer of '67. They were constructed of thousands of 45 gallon oil drums stacked three high and filled with water - gruelling work in temperatures exceeding 100 degrees.

Anyway, many thanks for showing the photos and evoking old memories. Regards....Paul

HMS Eagle 1967 Commission, The FAA at its Zenith.

Many thanks to Tim,and Barry for making available the late Grenville (Budgie R.I.P) images with this thread.

Just got to say what a superb collection they are, the Fleet Air Arm and carrier aviation at its Zenith. HMS Eagle was quite capable later of operating Phantoms as well as Ark Royal after re-fit, but was withdrawn prematurely by an anti carrier Labour government at the time.

If you have more in the collection, please do not hesitate to post again.

Thanks for posting these, what vivid and beautiful images. I particularly love the Vixen at low level "showing off". Just look at those condensation vortices!

HMS Eagle was quite capable later of operating Phantoms as well as Ark Royal after re-fit, but was withdrawn prematurely by an anti carrier Labour government at the time.

Not quite. While Eagle had been used for trials of the Phantom FG.1, that was with steel plates welded to the deck behind the catapults to protect the flight deck from the downward-pointing afterburner exhausts, and only one DAX-II arresting engine (#3) installed (the 4 others remained DAX-Is). Her catapults were the same as what Ark Royal got in 1970 (except for the bridle-catcher "horn"s).

She would have needed the other arresting engines replaced, catapult "horns" and water-cooled JBDs (jet-blast deflectors) installed, as well as getting avionics, engine, etc maintenance equipment for the Phantom installed.

Yes, this would have cost comparatively little - the estimate in 1967 was £5 million and 6 months.

Just a few more from the collection. 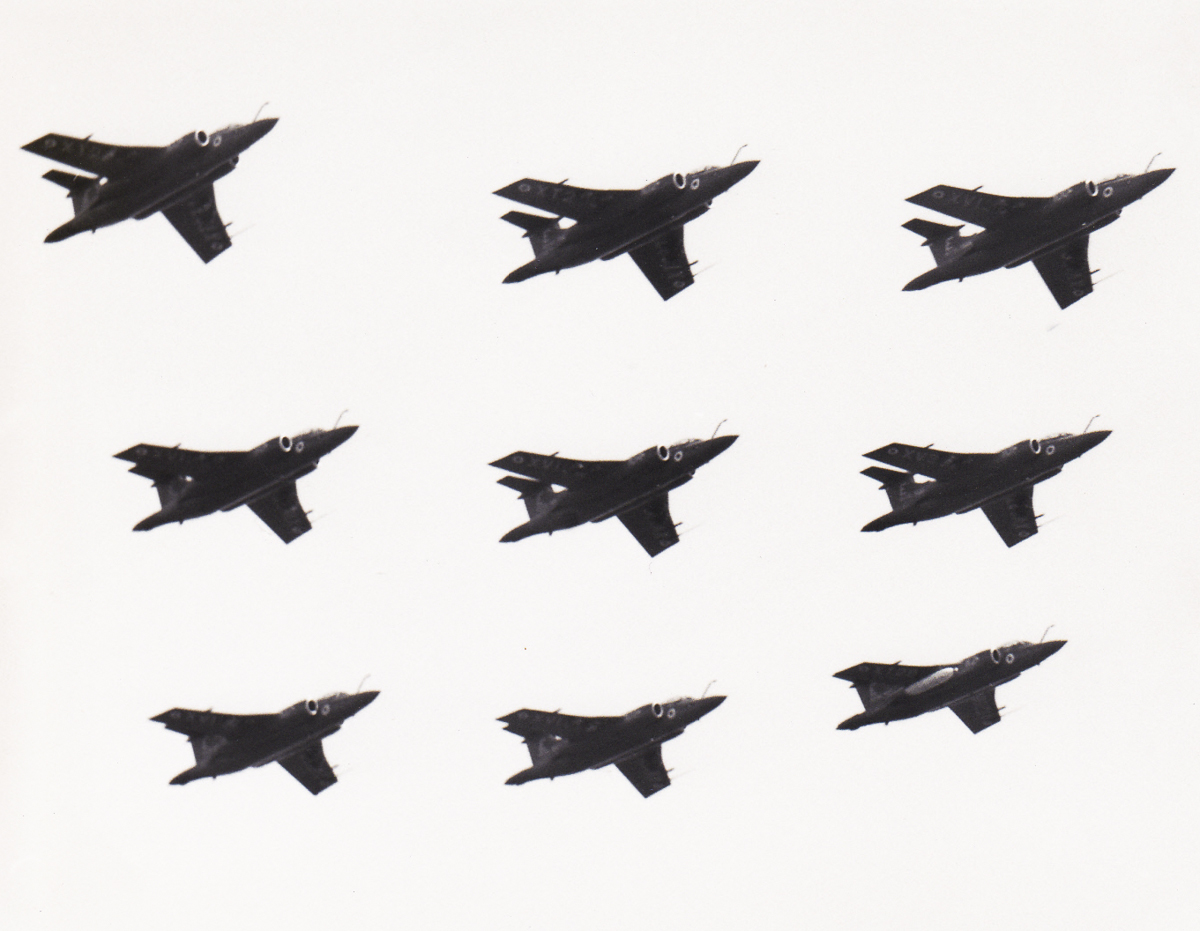 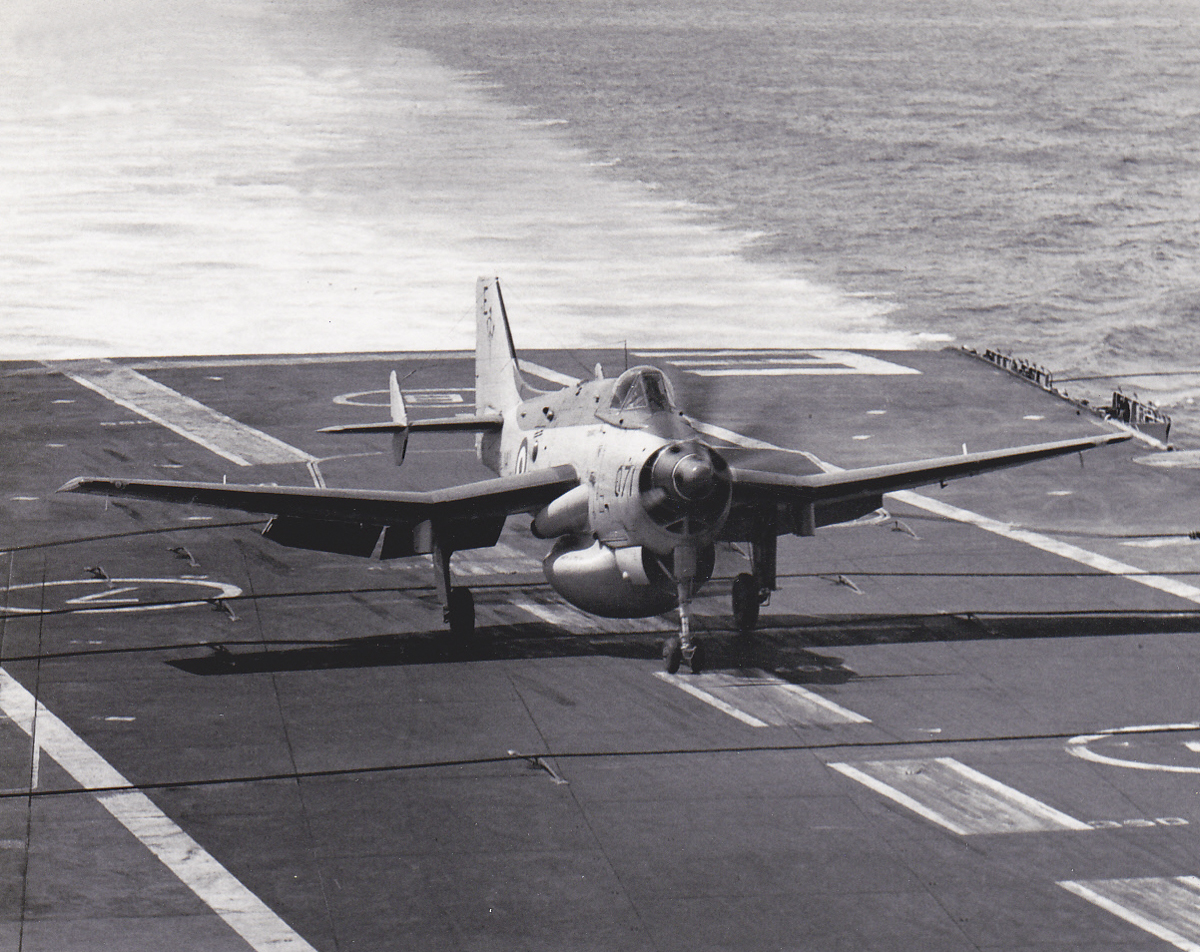 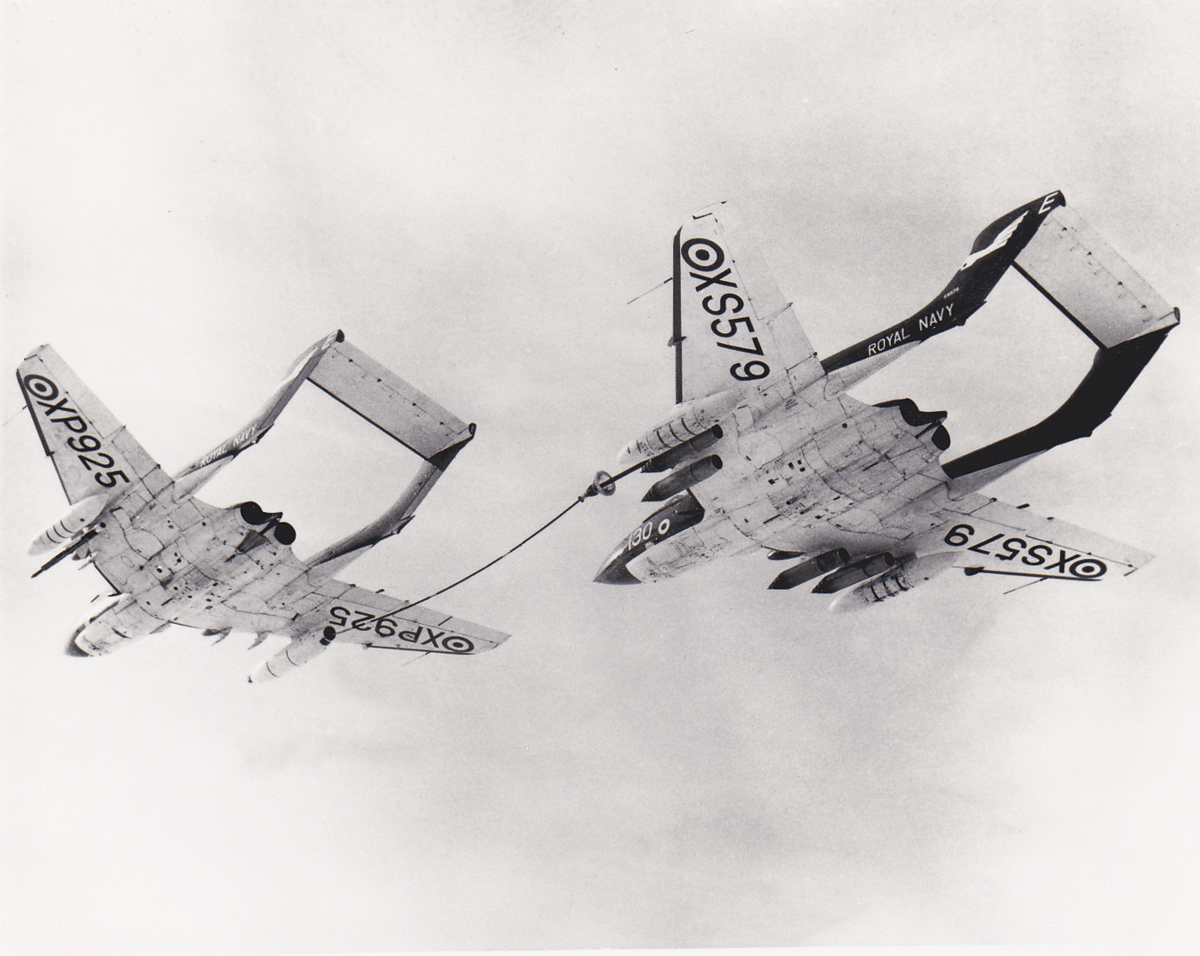 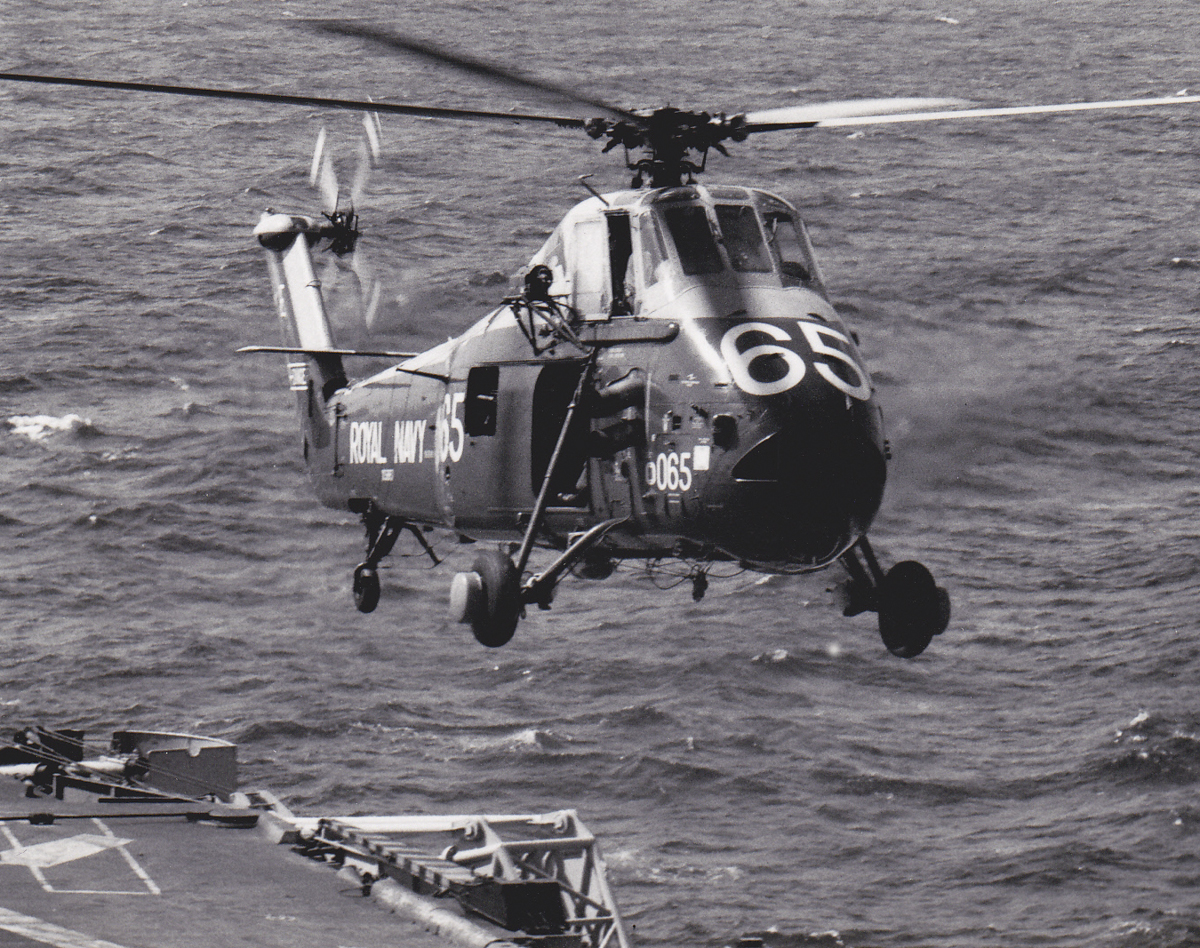 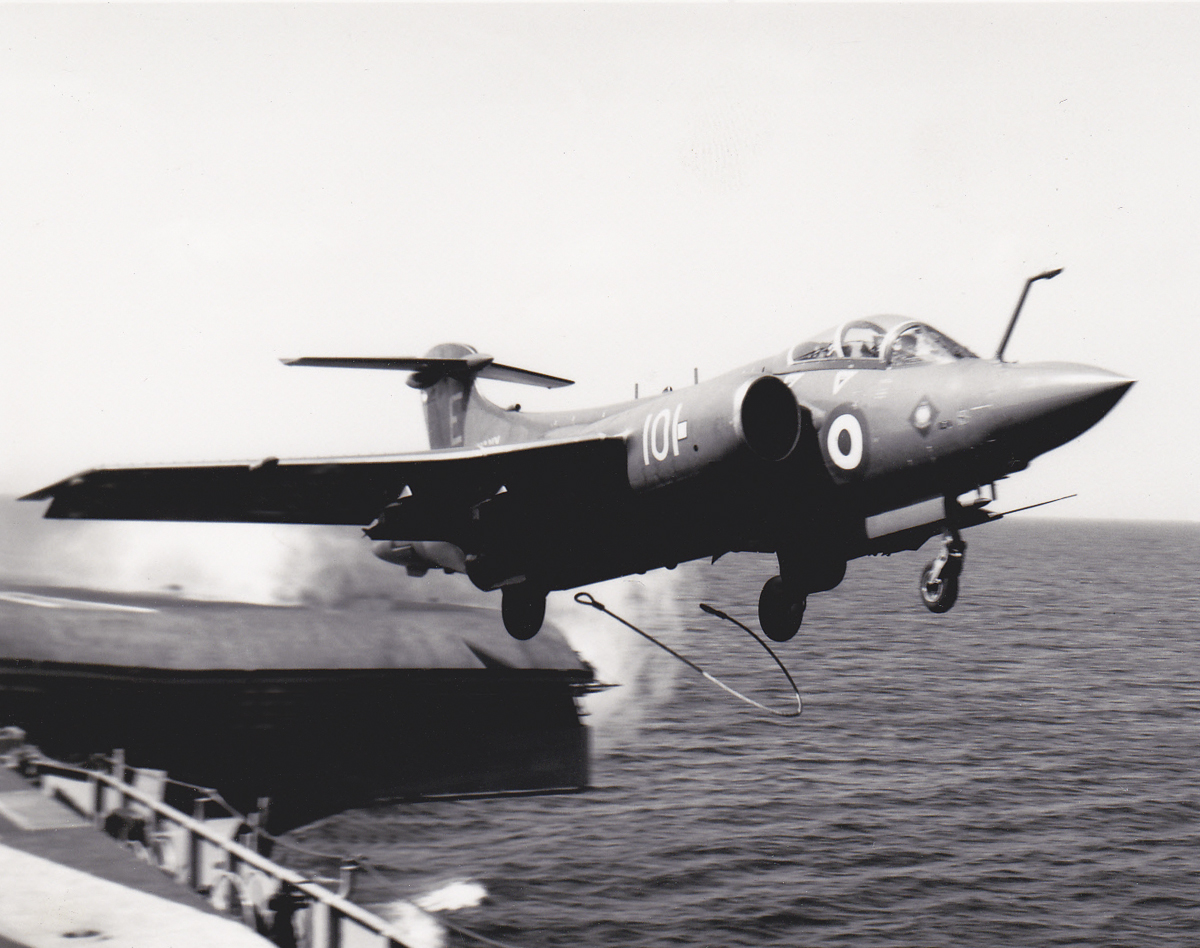 18...And for some reason my favorite shot! 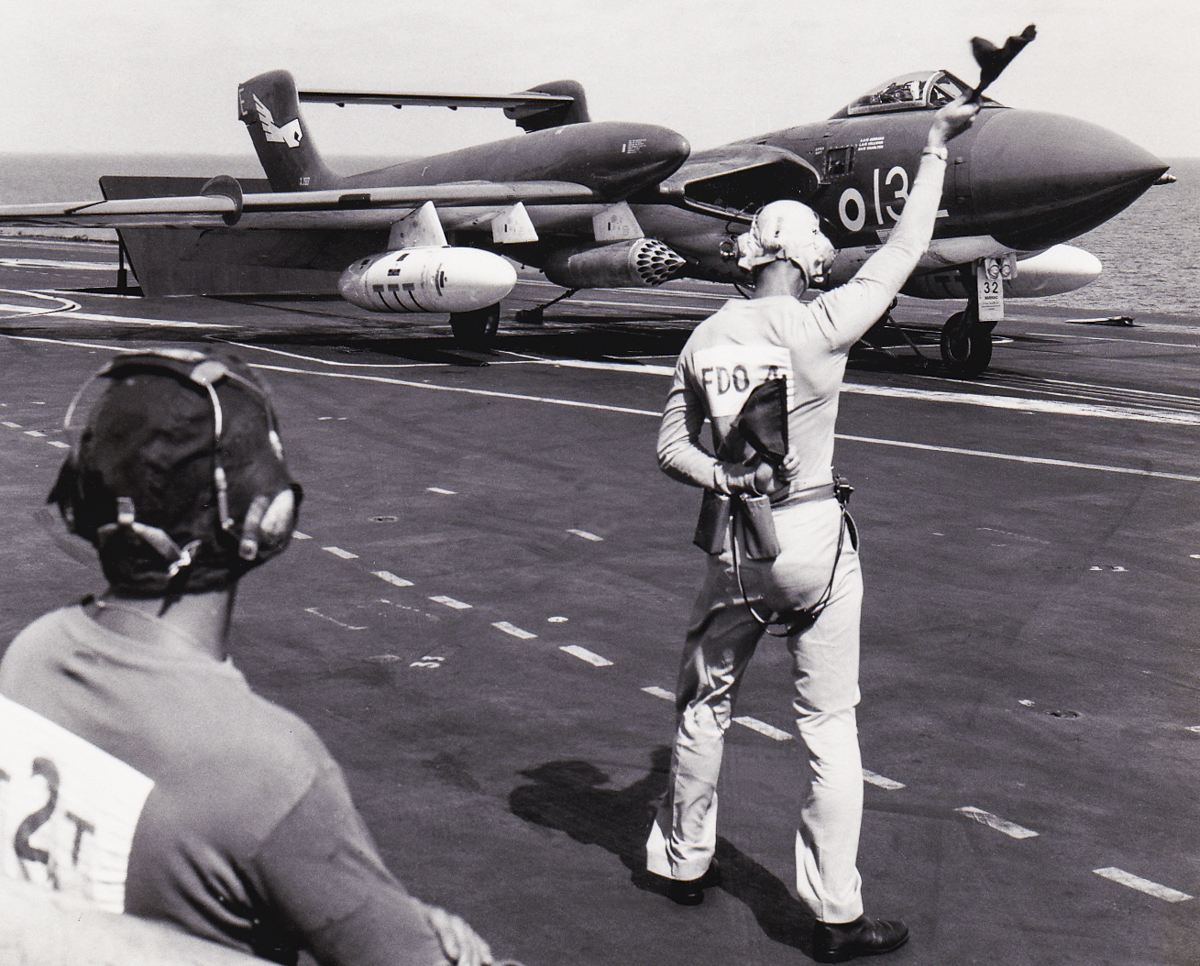 An even better collection of photos overnight. Back in 1971 I got to visit Eagle when she came to Wellington, New Zealand on a non public day with the Aviation Historical Society of New Zealand so we got to see a few other places.

While checking out the aircraft list, I found that on the public days which I think there was two, 26,000 kiwis visited the ship.

Just as an aside, do you happen to have any pictures of any of the escort ships by any chance? My old man was on a destroyer called Caprice (D01) which I think may have been in Cape Town in '67, just wondering if she accompanied Eagle on this trip.