Intriguing Spitfire Image - But Where Taken?

Bird in 1946, taken from the National Portrait Gallery website.
[ATTACH=CONFIG]260148[/ATTACH]

That clinches, not Bird then.
Thanks. 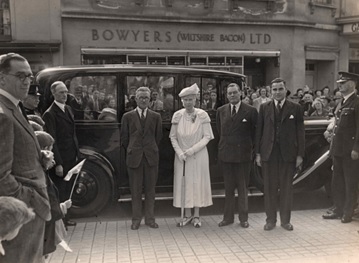 Leonard George Gooch far right, Works Manager of Supermarine from late 1940. Standing next to him is Sir James Bird, Managing Director who returned out of semi-retirement to lead Supermarine through the war years. Yes, they do look a bit similar but you can spot the difference here. They are pictured with Queen Mary visiting the town of Trowbridge, Wiltshire, where Supermarine had a cluster of dispersal workshops making Spitfires that were flown out of (still in partial use) RAF Keevil.

https://hampshirearchivesandlocalstudies.wordpress.com/2018/09/14/out-of-the-shadows-a-spitfire-story/ takes you to an account by Zoe Viney, a member of Len Gooch's family that has the original picture in it.

In Denis Le P Webb's book, Never a Dull Moment, p165 -166 he describes taking a party of Senior American Aircraft Executives around some of Supermarine's dispersed facilities in mid 1941 (before Pearl Harbour) and then lunching them at The Polygon Hotel.

"The two sitting either side of me seemed genuinely astonished at what we had managed to produce after the raid. (The two main factories had both been put out of action in late September, 1940.)

"Gee - no! Give us a large factory where we can feed in raw materials at one end and push the finished product out the other, then yes - we can do it - but Jesus - how in Hell do you organise a set up like this?" I had some difficulty in explaining this myself!!"

Webb says how he told the visitors that they had essentially maintained the structure of the original factories but instead of a messenger going across the shop floor they now had "motorcycle and sidecar messengers" doing it and lorries were now going from site to site with parts instead of hand trolleys within the factory.

"But didn't you all get around a table and plan this thing?"

"I could only reply, "Christ no! There wasn't time!"