I confess.... I have a thing about the Skyvan! 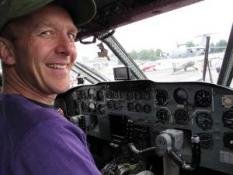 My name is Adrian and I have a thing about the Skyvan.

There, got that off my chest. I had a photo on my wall of one as a kid (actually, I had a lot of Ian Allen proof sheets on the wall, I just happen to recall that the Shed was one), and was startled to spot one a few years ago having thought they'd long since all gone to the great runway in the sky. It turns out that Oxfordshire is a bit of a hotbed of Skyvan activity, there's often one stooging round North Oxford avoiding Kidlington on its circuits between loading up at Brize and dropping loonies out the back over Weston-on-the-Green - I've seen at least three different ones, as the Spotted thread will bear witness. You'd think nothing else came over here. In my defence... I defy anyone to mistake the porcine shape for anything other than a Pink Floyd album cover, and it's the most commonly seen interesting aircraft by some way.

Imagine my delight today at the Brize families day when I realised there was one on the apron! I don't think the crew had ever come across anyone who'd had a pic on their wall before!

Omani Skyvan after a landing mishap. The 'Five Ton Budgie' was a very useful bit of kit. This one more than likely lived to fly again. The Oman Air Force had twelve of them. Three were later converted into maritime use by the addition of a radar in the belly!

And I have fond memories of USAF C-23 Sherpas coming into Bentwaters as part of the USAFE inter-theater logistics chain.

The 360 was interesting too. When I was in Texas the local airport was used to park retired ex-American Airlines regional (American Eagle) aircraft pending resale after they were replaced by later types. At one time I counted something like 10% of the type's production total on the field. Eventually, they all flew out.
​​

Omani Skyvan after a landing mishap. The 'Five Ton Budgie' was a very useful bit of kit.

Paraffin is similar to but more refined than kerosene.

One of my old gliders may or may not have had a Skyvan 'Punkah Louvre' mounted on the instrument panel for driver ventilation :)

I managed to get two rides in a Skyvan. When we were living in Singapore we decided to spend a couple of days in Tioman, Malaysia (maybe you saw the film "South Pacific"). So we took a trip from Seletar to Tioman in 1989. It was in Tradewinds Skyvan 9V-BNJ, 45 minutes each way. Exciting short field landing on the strip. I took a photo of the Skyvan arriving later. It's not much good, but I'll attach it. Note that landing and take off are from opposite directions, as it's hemmed in with jungle, sea and hills. It was a 3M version, ex Singapore Air Force. Very small box inside with a rather military feel (and smell) and a big net at the back for bags. I admit it was fairly noisy but I liked it. Great stuff.

I was there today too Adrian , did you enjoy your day

Enjoy my day? It was made the moment I saw the Skyvan! Pity we didn't know each other was there - we could have had a natter.

If you saw a loony with a box camera round his neck, that was me.

Me too there’s something about them ! When the European snapper lot booked the skyvan to snap the Ultimate Fighters at Sywell I ignored the Buchons Spits and yank tanks.... ooh Skyvan...

I worked for Shorts for a number of years where the Skyvan 2 with the horrible Astazou XII with electric prop was a disaster. The Skyvan 3 with the Garrett was the aircraft that set in train the success of the 3-30 and 3-60. The Skyvan 3 first flew in December 1967 and was certified with a complete re-run of the Flight Test Programme in four months which I think still stands as some sort of record. I have to say quite a lot of the flying was fairly exciting. I've written up most of this but very little has been published, probably because it's actionable! Happy days - I think!

In this day and age of giants such as Airbus and Boeing it’s great to see a Shorts brothers aircraft still grace our skies! A bygone era from when British aviation industry was a formidable competitor.