This shot of a Goliath floatplane is currently for auction...in the back of the hangar is a monoplane with a single raft type float...any ideas on its identity

Looks more like the doodles I used to draw in the margins at school than a viable flying machine :S

Possibly the Farman F.171 which was a one-off derivative of the F.170?

Mothminor....I do believe you've got it!! The F.171 seems to have been the single engine Farman Jabiru (which looked a bit more 'normal' than the 2- and particularly the 3- engine version).  Now the search is on for a clearer photo of this floatplane version. 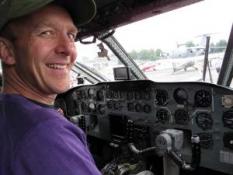 For a nation  famed for their style, the French really have built some fugly aircraft, haven't they?

Only problem is that the inboard strut arrangement is wrong for the Farman F.171 (F-AIGE, which was a one-off, built for a proposed North Atlantic crossing by Maurice Drouhin) and I can find nothing to indicate that this aeroplane existed other than as a landplane (let alone with the 'slab' mono-float). However having said that, I have to concede that the aeroplane in the hangar behind Goliath seaplane looks remarkably like the F.171 and I haven't yet found anything that is a better match.

This example has a very similar strut arrangement to the one in the hangar. Although it's difficult to see the complete registration I think it is F-AIGE. Is it definitely a float we are looking at underneath the aircraft in the hangar?

Maybe not, MM. It could be that someone has just removed the wheels! However if you look closely at the original photogragh, the 'slab' float (if that is what it is) is significantly lower, and not attached to the fuselage, than the lower sesquiplane wing in the photograph that you've posted. Also the aeroplane in the hangar, in the original photograph, appears to have a two bladed prop, whearas that in the most recent photograph seems to have either a four bladed prop or a pair of two bladed props.

Yes , I was comparing the photo of F-AIGE with the hangar shot, too. The struts on F-AIGE are different from all the other F.170 Jabirus on that useful Russian site, and are closer to the pattern of the hangar example as are the crossed bracing wires (absent on the other F.170s).   http://www.airwar.ru/image/idop/cw1/f170/

In the attached join-up image I've reversed the hangar picture for easier comparison (thus it's prop goes the wrong way :-) )

The book Les Avions Farman has a close up of this aircraft on page 109 from the same eBay image. It is described as the Farman F 171 specially built for the North Atlantic crossing in 1928 and named “Special Raid”. The index of the book then gives the registration of the F 171 as F-AIGE so there is an anomaly there with the other picture posted above unless the floatplane was subsequently rebuilt as a land plane.  Jabiru was the name of the F 170 series, not any one particular aircraft.

Maybe not, MM. It could be that someone has just removed the wheels! However if you look closely at the original photogragh, the 'slab' float (if that is what it is) is significantly lower, and not attached to the fuselage, than the lower sesquiplane wing in the photograph that you've posted. Also the aeroplane in the hangar, in the original photograph, appears to have a two bladed prop, whearas that in the most recent photograph seems to have either a four bladed prop or a pair of two bladed props.

I may be totally wrong but I think the wheels are still attached and the float/wing is possibly awaiting attachment. I've tried tweaking the photo a bit and I think I'm seeing a wheel? Agreed re. the prop though. I was initially sceptical about it being the F171 F- AIGE but the more I compare it to various pictures of F170/171 aircraft - I now think it is likely to be the F171.

I wonder if the Wings are Trestled (supported) near the wingtips and the 8 wing struts are disconnected from the landing gear/sesquiplane - if the lower ends of the struts were then tied together it might explain all of them being at slightly the 'wrong' angle.

Difficult to be really sure from the available picture but there might be a large/high trestle under the outer wing,if the aircraft was trestled it would normally be placed in the 'Rigging Position' (ie 'level' ) - the a/c in the picture looks pretty much to be level. The aeroplane in the hangar also seems to be missing all the port side windows that appear in images of the F.171.

I believe that the picture was taken either before or after the record attempt was made....

In May 1927, Lindbergh made his transatlantic flight from the United States to France; the conquest of the Paris-New York route became a matter of prestige for the French. Farman did not stand aside, although an attempt was made even before Lindberg: the single-engine Farman F.171 Spetial Raid, a development of the F.170 line, appeared in 1926, during its tests it turned out that the Farman 12 We engine consumes too much fuel, and 3800 liters per flight seems not enough. F.171 was converted in 1928 into a passenger plane

Deletion of windows was common on long distance special versions (e.g. the Atlantic Empire boats, Howard Hughes DC-1 and Lockheed 14). Note also that the single prop on the Jabiru in the hangar turns the opposite way to the '4-blade' arrangement on F-AIGE...could be explained by a change of engine type.  At least the unique? strut and wire bracing on F-AIGE bears some relation to those on the Jabiru in the hangar.There are contemporary French Aviation magazines archived online which might help but my French is too poor to search effectively

I believe that the F171 had basically the same engine as the F170 (Farman 12 We),although I have not as yet found any good quality pics of the a/c in Long Range trim,it would be extremely useful if we could find a good F171 pic in Long Range trim.

As I posted earlier re the struts - if the a/c is trestled and the wing struts are disconnected from the landing gear/sesquiplane and with their lower ends tied together then it would explain the slightly wrong angle.

Both Propellers to me look to be RH Tractor (ie clockwise rotation as seen from cockpit).

The F170 had a slim/long Door/Hatch just behind the  engine on the stbd side - in MM's blown up pic you can just make out what appears to be a Hatch sticking out the stbd side of the a/c at approx 45 deg.

I think this a/c was probably built with no passenger windows and then they were added during conversion to passenger configuration.

I do wonder if the 'Float' on the floor (in front of the a/c ?) is actually an auxiliary fuel tank to take the place of the normal sesquiplane,thereby providing extra fuel not too far from the CofG......

or perhaps to hold a couple of hundred litres of cognac to help the pilots along :)

I assume that you are speaking of the aviation periodicals available online at the BnF Gallica website. A few days ago I did a search there with the key word 'Farman F.171' but it produced next to nothing - certainly nothing about F-AIGE as prepared for the proposed tranatlantic flight by Maurice Drouhin. But I'll scratch my head in the hope of coming up with some other appropriate key words and search that website again over the weekend.

It seems that we had the answer, two days ago, when Lynx825, referred to Jean Liron's book 'Les Avions Farman'. Having pursued the enquiry on another forum, I was again referred to that book and the text which appears below the photograph which appears there. Translated, that text reads:

'Farman, who wanted to be at the front of the "conquerors of the ocean" had, as early as  1926, built the F 171 (2) for this purpose. Featuring a metal structure, this Jabiru has an increased wingspan and is equipped with a Régy propeller with two large blades, which in December 1926 obtained the Certificate of Airworthiness No. 1612 and the letters of registration F-AIGE, and was to carry 3800 litres of fuel distributed in fuselage tanks and in a large hoof-shaped container serving as a central float for landing. Two wheels, on either side of this float, were to be dropped after take-off.'

'The tests of this aircraft having shown excessive hourly fuel consumption, the F 171 was, in 1928, transformed into a luxury transport for eight passengers. Put into service by SGTA, they will scrap it, in August of the following year, after 45 hours of flight in total.'

I think that this puts into context the elements of the structure of the aeroplane which is seen at the back of the hangar. It seems that the 'slab' float was both that and a fuel tank and, sadly, would have contained aviation fuel rather than the pilot's personal supply of Cognac (which reminds me of a tale of an Alcyon motorcycle which was run on high ABV eau-de-vie ..... !).