Mangusta and Tigre are highly uncompetitive and practically obsolete. low production ratestes. India which invites just about every one for competitons dont even invite them. EU is also heavily losing on heavy to medium weight helicopters. and has very low production rate

power and weight is directly related to protection level,weopons, performance and electronics in helicopter. It is like comparing Gripen to Flanker. EU rise in helicopters are directly related to rise in Oil prices that led to sells in Gulf countries, Canada, Brazil, Norway, Turkey. This is not sustainable.
New

Can't quite agree.. In my opinion, even with very advanced materials, the level of protection the Tigre or A129 can offer is incomparable to heavyweight champs.. A ~3t helo is gonna be rather fragile and prone to damage even from small arms. Granted, on paper the Tiger can officially withstand 23mm (well, at least some fuselage parts, that is) but I have my doubts regd. the overall level of protection.. Finally, even AH-64 has had its share of troubles with AK-47 & Co.
New

But yeah, the light weight helos can probably be damaged just by looking at them, so they are a whole separate story all together.

Your point was perfectly clear from the start MSphere.

My words, exactly.. In the last two decades, the EU has brutally rolled over the civvie helicopter market and overtook domination in all areas with the exception of the lightest class where the Europeans failed to step in and thus left the market to Robinson R22/R44/R66s. At the same time they are obviously much less sharp towards combat helicopters, there is nothing European-made in the Mi-28/AH-64 class.. But as we have learned, even that might change soon.

The Guimbal company produces the G2 Cabri light helicopter which is now overtaking the R22 in term of sales with production ramping up to 100 machine per year.

Last week Czech ministry of defence has send request for proposal to several helicopter producer. Tender for new 12-18 universal (transport/csar/sar/attack) helicopters for Czech Air Force as replacement for Mi-24/35 will be announced soon this year. Czech ministry of defence want to get first examples next year, last in 2021. There are not announced candidates, but new helicopters will be used primary as transport and attack (so weapons including guided missiles), and some speculation is talking about UH-1Y Venom, AW-139M, KUH-1 Surion, H145M, S565 Panther. What do you mean, what is the best Mi-171ŠM´s complement? (Mi-171ŠM will be decommissioned around 2015, so new universal helicopter must be good complement for Mi-171ŠM potential replacement as well)

Certainly the Tiger helicopter is more or less in the same category as the Apache or Mi-28. How do the sensors on the Tiger compare with Mi-28 - what about armament fit and combat radius? The only real advantage the Mil might have is in armour protection - important maybe to the Russian military, obviously not to the French or Germans or to those other countries which have developed such 2-seat heli-gunships.

And the winner is... Lockheed Martin to acquires Sikorsky for slightly over 8B$

The two companies plan to announce the deal on Monday before both report second-quarter results on Tuesday, said the sources, who were not authorized to speak publicly.

It will be Lockheed's largest acquisition since it bought Martin Marietta Corp for about $10 billion two decades ago. It is the first major strategic move for both United Tech Chief Executive Officer Greg Hayes, who was elevated to CEO from finance chief in November, and Lockheed CEO Marillyn Hewson, who took her job in January 2013.

[...]
Textron Inc (TXT.N), parent of Bell Helicopter, had submitted a bid for Sikorsky, but dropped out of the bidding after the price rose, according to several sources familiar with the matter. Both helicopter makers have seen revenues drop due to lower demand from the oil and gas sector.

As a consequence, what ever are the outcome of the US Army Helo next gen competition, LM will be part of it (see post above on the subject).

Also, this mark the return of LM in the Helo industry, right when the rigid and propulsive rotors architecture has marked a spectacular return in the art of rotary winged aviation.

So where are Aerospatiale and Westland now?

Oh, right -- mergers. This despite dominating the civilian market and enjoying the fruits of Cold War R&D.

So with civilian market penetration static (in a best case scenario) and the fruits of the Cold War now having been exhausted, coupled with anemic long-term economic growth prospects across Europe coupled with political ideology/priorities that de-emphasises both military spending and state investment of all kinds, the question is when Airbus and AgustaWestland will merge.

The main markets of Airbus and AgustaWestland are not in Europe, they are not dependent on military/government orders unlike everyone else and in case you havent noticed the ones who are merging are the chaps called Sikorsky and Lockheed Martin.

22 July 2015
Rumours of a black puma being spotted in Kabul this week proved to be true, as the RAF’s 230 Squadron returned to operational duty…this time in Afghanistan.
Flying the Puma HC2 helicopter, the squadron from RAF Benson in Oxfordshire arrived in Kabul in late June, bringing with them a character not seen on operational duty for over 70 years.

Sporting a unique colour scheme, “Black Peter” as it’s affectionately known was specially painted in 2014 to commemorate the 95th anniversary of the helicopter squadron, as well as the 70th anniversary of when the original Black Peter last took to the skies.

In 1944, operating Sunderland flying boats in Ceylon, the Commanding Officer, Wing Commander Dundas Bednall had his aircraft JM 673 ‘P’ (for Peter), painted matt black to reduce the chance of being spotted during night patrols. Sadly, on the 28th of November ’44, Black Peter as it had already become known was lost in the Bay of Bengal during a cyclone. Despite extensive searches, the aircraft and all its crew have never been found.

70 years on, the squadron is in Afghanistan supporting UK and coalition forces on the Resolute Support Mission; a non-combat NATO-led operation, training, advising and assisting Afghan Security Forces to develop a stable, secure and prosperous country of their own. The Puma squadron of aircrew, engineers and support staff makes up almost a quarter of the 400 plus UK military personnel in the country following the end of combat operations in late 2014.

State of the art avionics on the Puma 2 helicopter provide an impressive array of defensive aids and safety measures. An additional fuel tank coupled with more powerful engines than its predecessor also means that the Puma 2 can swiftly transport a greater number of troops and equipment around Kabul in the air, rather than on the busy streets of the rapidly expanding and bustling city.

As Officer Commanding of the detachment, Squadron Leader Chris Greenwood said, “leading 230 Sqn on ops, with Black Peter with us for the first time since 1944, is an honour I will never forget. The Puma is ideal for operating in a city environment, particularly at high altitude and in such high temperatures. It can be very challenging for the aircraft and aircrew but the enhancements allow us to deliver vitally important aviation support to the NATO mission.”

The RAF squadron will return to the UK in September when it will be replaced in Afghanistan by another team from RAF Benson. 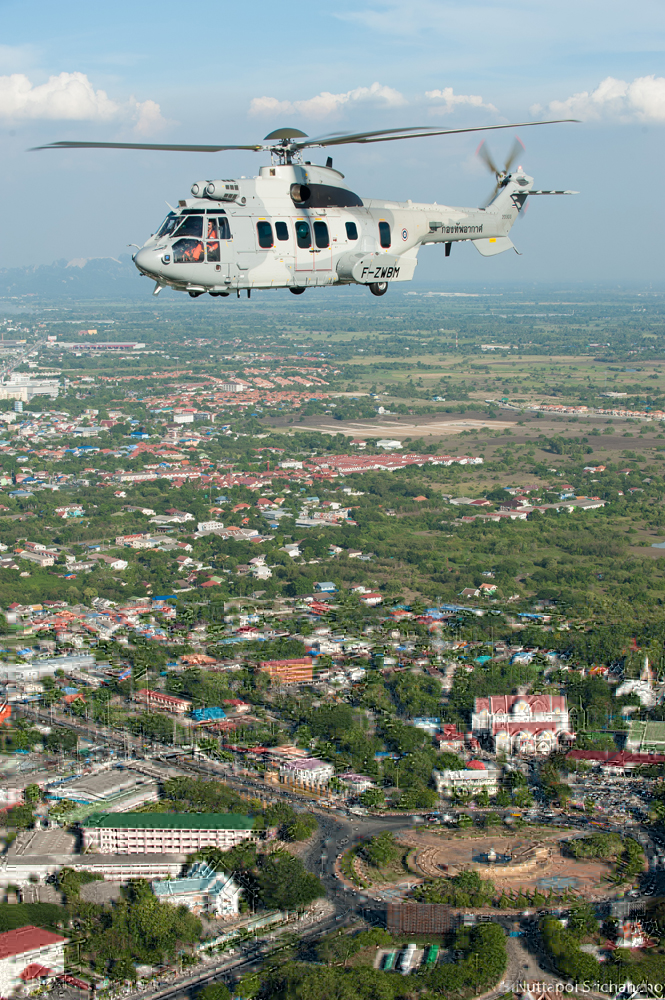 Rooivalk mark-2 to whirr into life?

A Soviet-made Mi-7 Lao military helicopter that went missing this week with 23 people on board.