This isn't a silly idea at all, in fact modern Chinese VHF radars do exactly that to improve their precision locating targets. Since the L band arrays in the Su-57 have only one row of transmitters, this would provide a vertical location capacity that would be absent otherwise. What I don't know is how much more effective the L band is compared to X band to detect VLO targets, especially considering that the L-band arrays are way smaller than the X band one in the nose. Maybe small targets like AAMs could be detected better since their physical features have a size in the region of decimeters as the wavelength.

Thinking further about the directional communication links, I am inclined to believe they should be available, more even after seeing today the Su-57 paired with the VLO Okhotnik. It would not make sense to create such a stealthy pairing and then ruin it all via omnidirectional communications. X-band radar arrays should be the selected emitters and the tail cone should include one transmitting unit, too. This is more logical/economical than having additional transmitters operating in other frequencies I think. 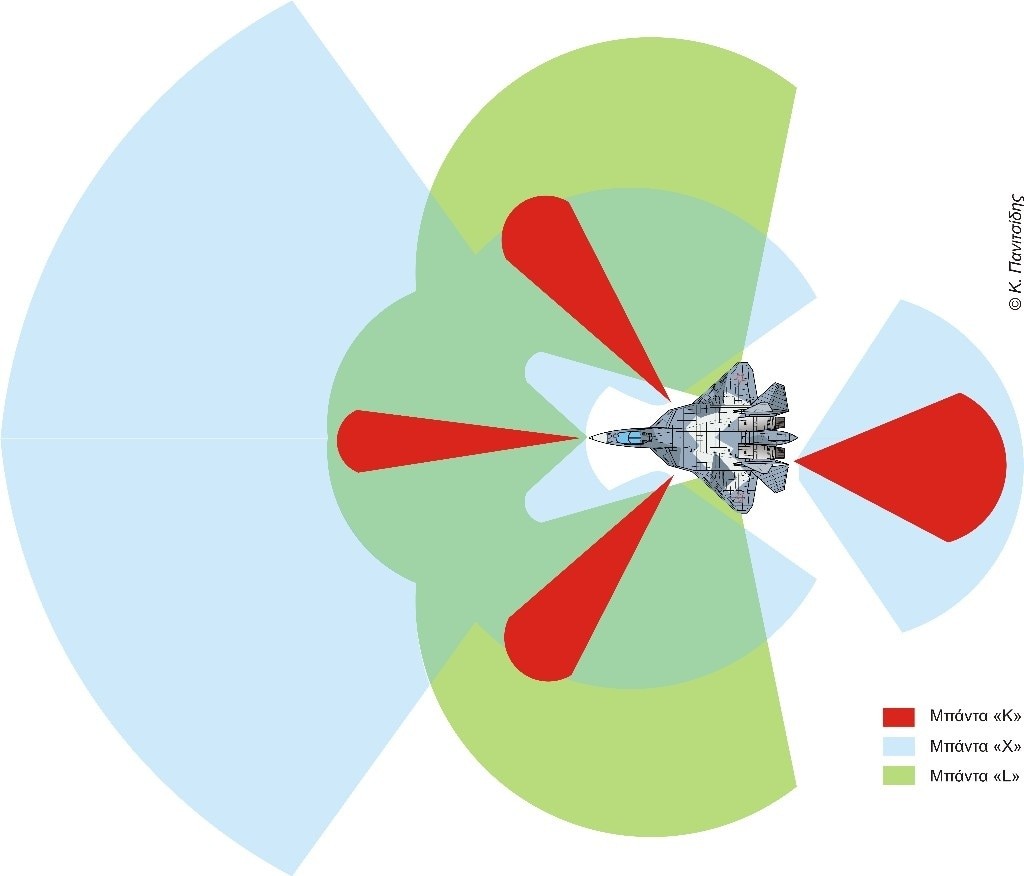 Different bands besides X-band can be effective as in they can be used for fire control. What we do know is that Lockheed implies same values at 2-16ghz, but does not show if 1ghz increases the value or anything above 16ghz increasing in value. I do not think the F-35 which will be the major backbone for the marines/navy/airforce would take the Lockheed approach because if they did SAM's would immediately notice a target is approaching which can compromise its mission faster than the Northrup approach on the 1st image. This would ruin the "multi-role" purpose of the F-35 now if it was the F-22 built only for air superiority that would be a different story.

Current radar receivers cover like 1-18ghz give or take, GaN AESA based modules for EW systems have been told to cover UHF/VHF according to some Russian and US sources. So the next issue is photonic radars going up to 100ghz. Mikheeyev said the same multi-band radar technology can be found on the SU-57 when talking about ROFAR. So looking at the 1st image my focus is on the 17-100ghz tracking frequencies its more horrible than X-band but can be better than IRST around 300gh?.


I am assuming frequencies 19-100 ghz might have a longer range in tracking than IRST but less than X-band. Lets say the SU-57 in the 1st image had material to go with the Lockheed approach and the same went for the F-22 and F-35. The SU-57 can expose different bands and the 1st image does not tell what distance both targets were taken we assume the same distance and there is the fact that we do not know which company focused the most on what frequencies. F-22s, F-35s and even the SU-57 can't be too negligent on lower frequencies than fire control if some of their mission purposes are to fly through enemy SAM territories.

I have heard from Austin at the other thread of the different frequencies host missile radars can operate in and one such case is K-band. L-band might offer less tracking capabilities than X-band but K-band cant be jammed, see the stealth target a little better since it also not optimized as much as the other lower frequency firecontrol bands to absorb those frequencies. Than there can also be enhanced tracking performance as well.

Panzerfeist, when do you believe we can see first rofar radar in a fighter jet totally operative?


"The Russian military will receive radars based on revolutionary technology - radio photonics.

Unlike traditional radar stations, the new locators use optical devices rather than microwave electronics in the signal processing path.

This allows you to increase the bandwidth, which is necessary to obtain a higher resolution, which will ensure the detection of small targets against the background of interfering objects and the recognition of complex targets.

And the main advantage of the new development is that it allows you to make a three-dimensional portrait of an object and determine its type.

In a few years, radio-photon radars will be installed on promising fighters and other weapons systems.

- During the experiment, the locator tracked the trajectory of a small-sized drone.

A full analysis of his work was made, on the basis of which the directions for further research were determined, ”said Maxim Kuzyuk, Director General of RTI JSC .

To develop a new system, a new component base is needed, including photonic integrated circuits.

Modern radars create electronic radiation in the area of ​​their action, which, reflected from objects, returns and transmits a signal to the receiving equipment.

This technology has not changed for many decades.

Radio-photon locators operate using an optical signal processing path with an ultra-wide passband, and this provides a number of advantages.

Firstly, such radars are much smaller and lighter.

Secondly, they are more reliable and more resistant to interfering electromagnetic radiation.

In addition, prospective locators have higher resolution and noise immunity.

Radio photon locators allow not only to detect a target and determine its flight parameters, but also to compose a three-dimensional portrait of an object in order to determine its type.

New radar technologies are likely to be used to create the sixth generation fighter in the 2020s.

It should not be expected that in the coming years all traditional radars will be replaced by photon radars - the capabilities of modern radars based on microwave paths are not completely exhausted.

Recall that the RTI also developed the Elik flight test complex, thanks to which radar stations will be able to classify aircraft of air, surface, low-flying and space objects.

Real-time radars will be able to tell the operator what type of aircraft, cruise missile, satellite or ship appeared on the screen of the station."

Thanks for the table, it shows how the performance at different frequencies depends on the design. Current fighters are all thought to be detected much easier in lower frequencies (VHF and lower), Russian radar designers say just that, too. The L band arrays on the Su-57may be of help? I am not sure because the decimetric band wavelength is probably not big enough to make a substantial difference. The power of those arrays is unknown to me too, nut the number of transmitting modules is relatively low. But if the approach meme_expert said is workable, why not putting VHF antennae (I mean, even very few, like 1-3 modules) on the leading edges of the planes and using cooperative detection? This would actually render VLO shaping in small targets useless or in other words remove two orders of magnitude from the RCS reduction from VLO targets. The same way, numerous cooperative arrays of each time bigger wavelengths but smaller count of modules could address the upcoming broadband VLO designs.

ROFAR: I guess it will work differently from today's radars in that it will allow for much improved processing techniques, concentrating energy returned by the target over a VERY wide frequency band and hence fundamentally altering the amount of information (energy) recovered and the ability of the EW to jam in such wide band. But if radar can be made wide band with photonics, I have to suppose that a similar technology can be used for EW too. It is too early for me to understand all the implications, but I guess it will just make it harder for VLO.

A radar in the K band is not known to me in the Su-57 to be honest. It should be strongly attenuated by water vapor in the atmosphere so it would probably not help too much with long range detection.

New radar technologies are likely to be used to create the sixth generation fighter in the 2020s.

I have question that has been bugging me. Why the su-57 and f-35 seem to have such a bad rearward visibility? Is it for radar signature reasons? I thought the Russians where working on a new cockpit canopy design. Did they scrap the idea?

Somebody will buy the su 57E

Its an overkill jet for most air forces not named China, India or Turkey. But it will probably be one of the 3.

My best guess is Turkey. Turkey will have its own 5 gen but Erdogan knew that even while he was buying many F-35. So TFX does not preclude su 57E.

What on earth is this new missile? Is it for the conformal pods? 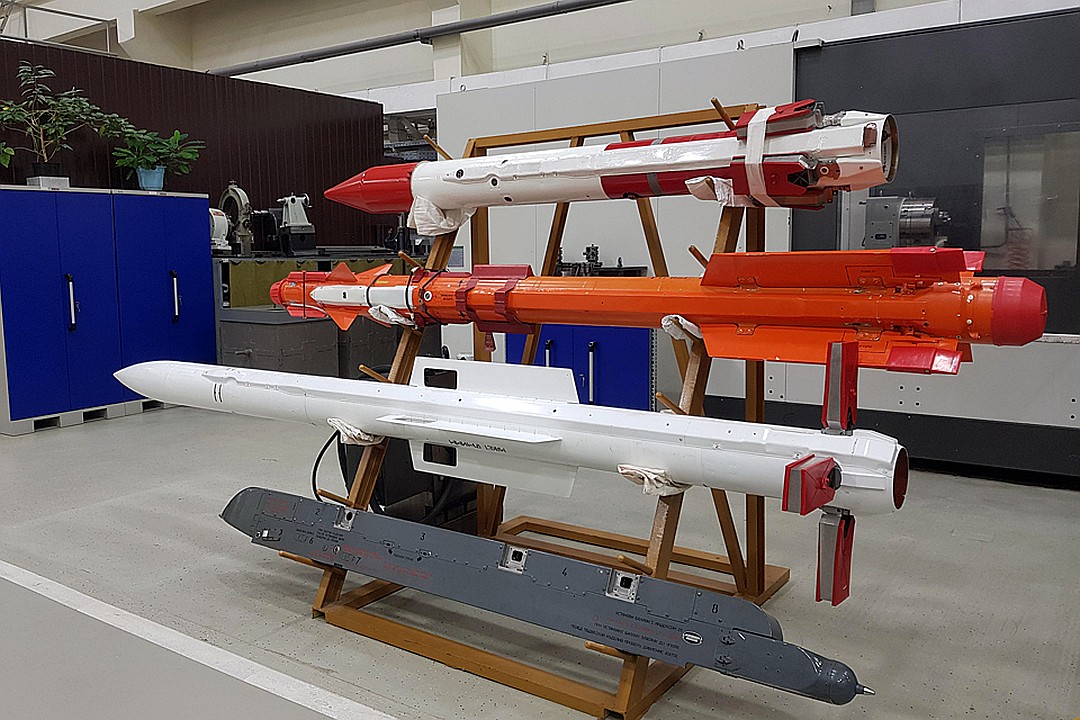 If the new promo video (https://youtu.be/eqgrv2kHQHA?t=82) indeed shows the missile meant for those pods being launched then it doesn't seem to be exactly the same as the one in your top photo...at this point the Su-57 seems to still be in a sort of beta-testing phase with limited operational readiness and it's serial production only slowly kicking off this year after the first plane off the line crashed late last year. According to a Russian news article from last month they still don't have the entire production line set up but they expect to deliver at least one new Su-57 by this year's end and have the production line fully operational early next year.

@LMFS or any other RMF member: could you please let GarryB know that his forum doesn't currently accept new members? He doesn't seem to be aware of it. Thank you! 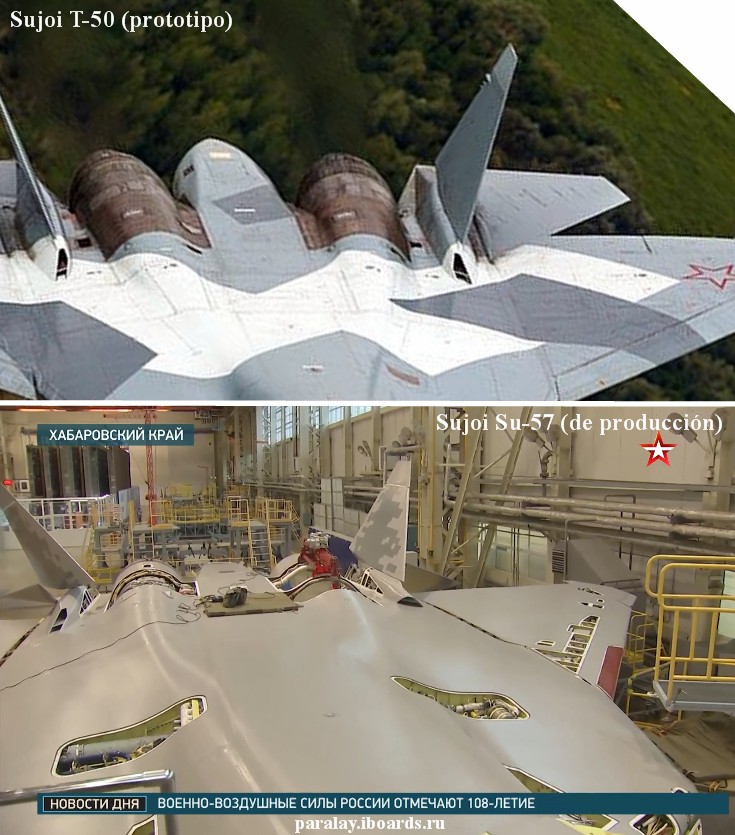 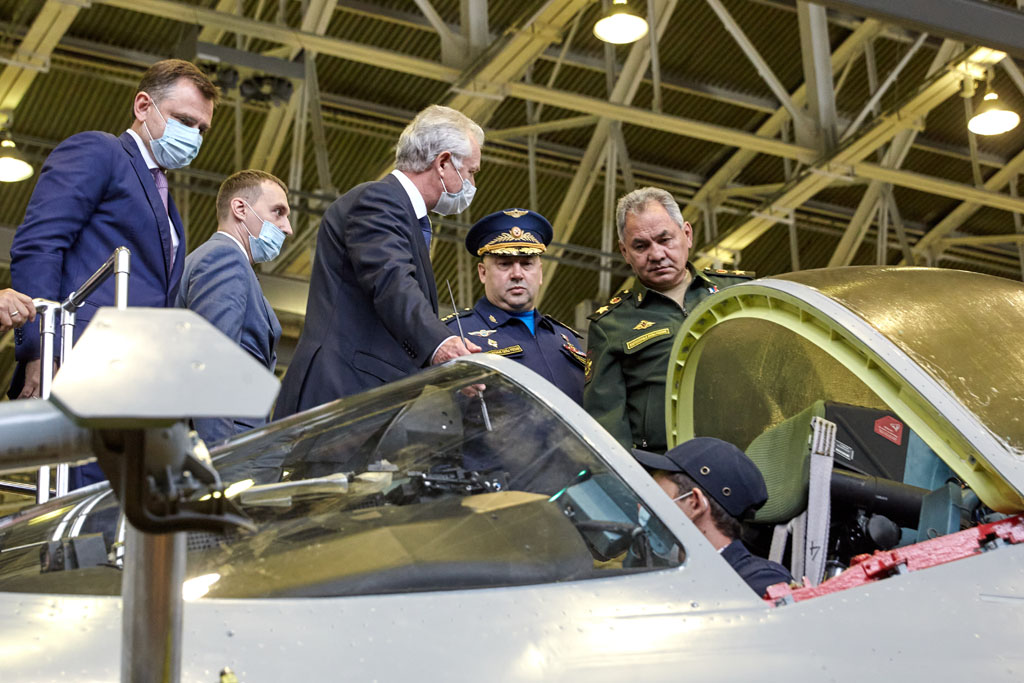 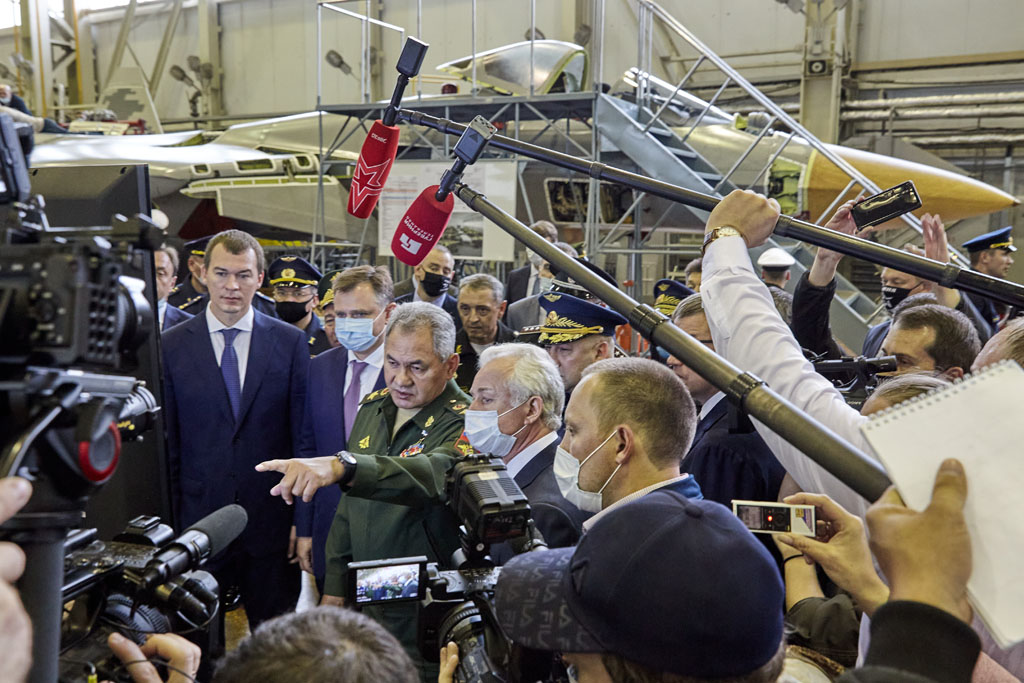 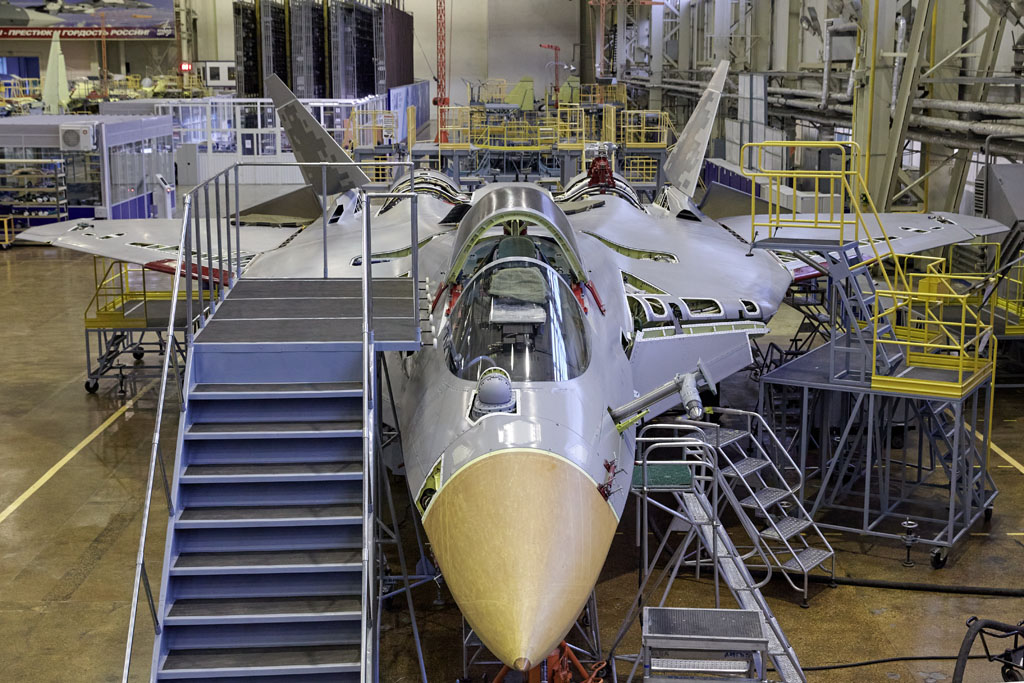 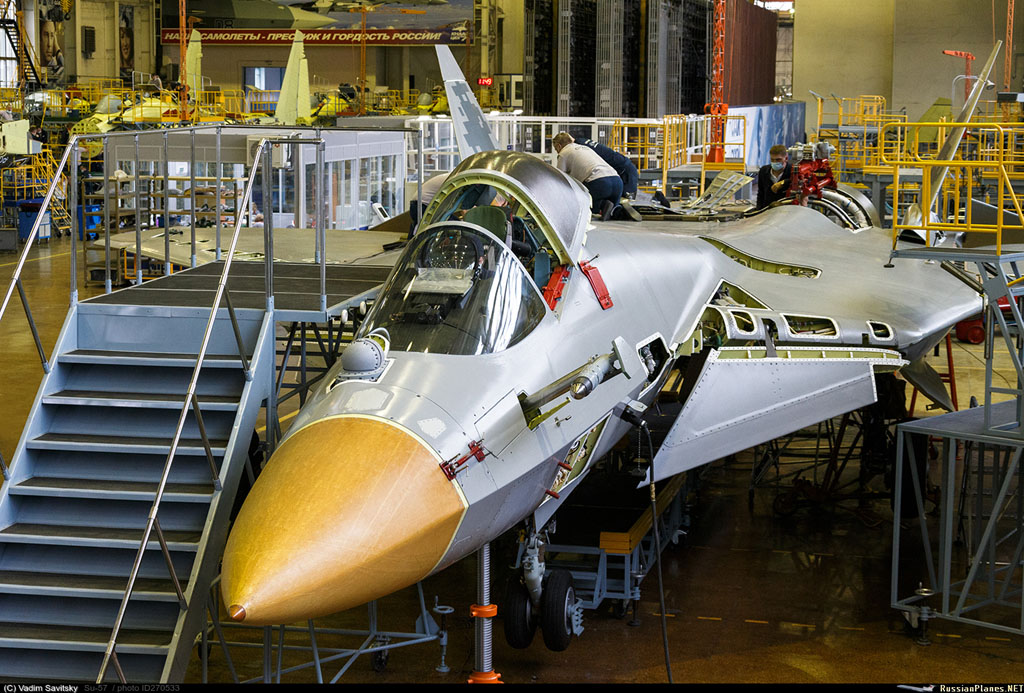 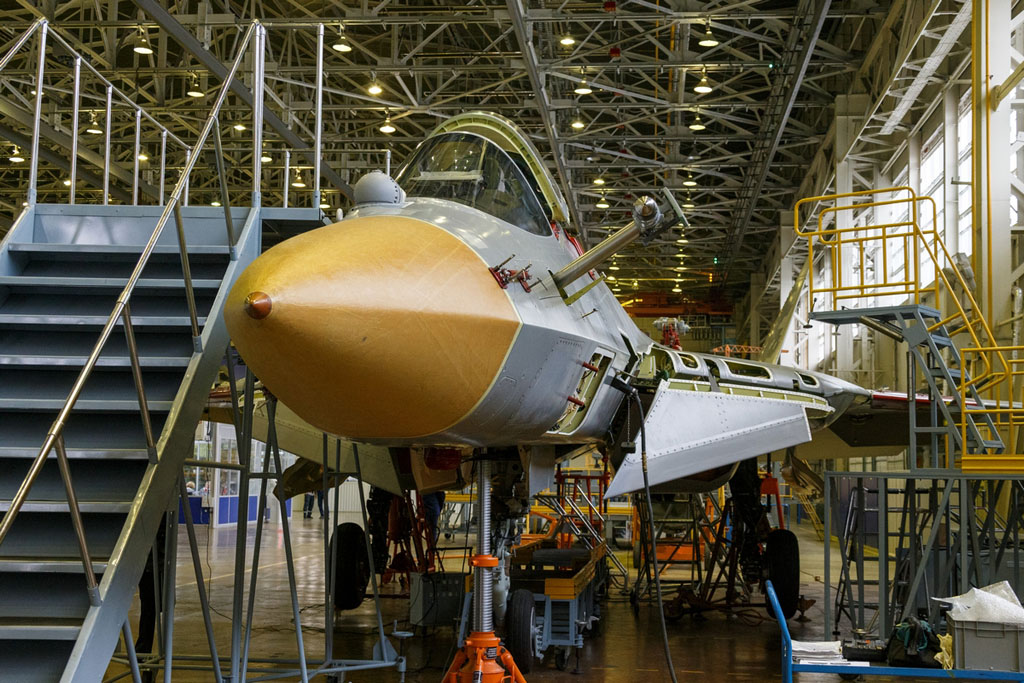