The truth is the proposal for 12 Mirage F1 to Argentina was valued US$ 40 million. That's in line with the $72 millions for 12 retired Mirage 2000 purchased by Brazil in 2005 (Macron not involved).
TomcatViP still tries to make a case, but he's talking nonsense all along. He can't even understand that giving for free scrapped Mirage 2000B (or Jaguars, or 3 dozens Mirage F1) taken from the junkyard is cheaper than having to pay to dismantle them properly (pollutants).
That's boring.

. remember your opinion about Chinese technology based on Chinese relative. I mentioned those helicopters . the are not sufficiently protected for armed forces nor they reliable for Ukranian budget. Ukraine situation is very similar like Japan. https://www.kyivpost.com/business/ryanair-seeks-hire-ukrainians-pilots-stewards-250-specialists.html
Ryanair seeks to hire more Ukrainians: pilots, stewards and 250 IT specialists

It might come as a total shock to you JSR but it is perfectly possible for a person in this modern world to have relatives from more than one country. I also have Irish and French relatives as well...

I was not basing my opinions on those of a Chinese relative, I was debunking your utter racist nonsense about the Chinese defence industry. I have no interest in a JSR-economics debate involving random quotes from unrelated articles to support your view that all aerospace developments outside of mighty Russia are somehow flawed.

TomcatViP my response to you was polite and reasoned and in no way sour, if you are going to put your views out to the world expect to have them challenged! Not unlike a certain thread earlier this year I think your core summation is flawed, take it on the chin rather than get huffy. I am certainly not opposing you starting a thread on any aviation related matter or subject of your choice, doesn't mean I will hold back criticism if I see the need.

In respect of the Mirage F-1 I don't think they are oddly cheap, the global market so far has failed to take up the offer of used F-1 and it reaches a point were the cost of storing them in the hope of a better deal is not viable. 300m Euro is certainly not an inconsequential amount.

Indeed the Spanish F-1 were offered to Argentina for 20M$ an airframe and you are also right that I was keen on the idea as those airframes are modernised to a good standard and would offer a good stop gap. The thing is the Argentine defence budget is not under my control and by all accounts their Airforce was less than keen on them it being a deal forced by the Government. In the end it fell through when they failed to stump up an initial payment.

Which leads me around to the core point even with an airforce that is desperate for a replacement type at a relatively low price for twelve modernised airframes the deal didn't go through. There just isn't the market for these aircraft when there are other better options available.

India was building Jaguar until recently, getting some spare airframes for free is a bonus for the Indian Airforce not essential. They were essentially scrap anyway, gifting them along with some retired two seater M2000 airframes helps France PLc when it comes to the gesture.

I should mention the fact that I have been advocating the idea of selling the F-1 to ATAC and selling some Jags for cheap to India to help them in managing their fleet well before the events. Oddly as it seems, this has even been discussed before here as it is, with you ,my dear Feydakin, on some case, opposing my arguments.
I should probably look at how I could offer you a decent internet browser for Christmas ;)

I don't remember those discussions, I also don't remember having any issue selling airframes for cheap to India or onto companies like ATAC. You are the one here who is getting all petulant that your sacred suppositions are getting challenged, it is childish now and was childish in the past. Does it matter? I am mature enough to be able to modify my positions with time, I am getting a strong impression that is not the case for you.

I have a very good internet browser, but thank you for your concern.

TomcatVIP haven't you noticed that most of these "bargains" were offered to the IAF ? Do you know how many contracts can be signed with India in the following few years ?

It might come as a total shock to you JSR but it is perfectly possible for a person in this modern world to have relatives from more than one country. I also have Irish and French relatives as well...

Well, Fedaykin, I have relatives from Denmark, Germany (Danish-speaking from just south of the border), Punjab, Bengal (but both from the Indian sides of the borders) & Japan.

So yeah, relatives from all over the place are entirely possible, as you say.

The truth is the proposal for 12 Mirage F1 to Argentina was valued US$ 40 million.

Alrdy discussed/answered/replied to you specifically : those F1 are not the same that were offered (see link in Fr that I offered you to translate for all of us).

Alrdy discussed/answered/replied to you specifically : those F1 are not the same that were offered (see link in Fr that I offered you to translate for all of us).

Indead, I talked about the 12 Mirage F1 offered to Argentina, not the 63 sold to ATAC. It seems you're not even able to keep track of all your mess.
New

OPIT, none of what you said here is relevant with the object of this thread. And now you are insulting me (it's Christmas holiday season for God sake)... What do you want at the end?


To give some arguments at your point, please remind that the Mirage F-1 were said to be offered to Argentina at 20M$ per airframe not so long ago (I even think I can remember how you seemed then quite enthusiastic at this idea):

So it turns out that what I say is not relevant except when you talk about it. Go figure...
Anyhow I've already spent too much time to get your "facts" straight, now I'm done with feeding the troll.
New

Hilarious. So being polite with you is now trolling. My way of seeing this is that you are such used to be rude with others that you don't even pay attention at your manners. You do know now that those F-1 that you were talking were not the one sold that were just retired, at least?

But to make you brain short circuit on something useful could you answer this paradox?

Last but not least I perfectly understand the Soft power argument to promote the image of the French democracy around the world (PhilipG) but when you give away 120 airframe for more or less 90M$, it doesn't makes any sense... Especially when payment for the priciest of them, let's remember, 300M$ for the full fleet of just decommissioned modern airframe, is routed via a single Freelancer in Switzerland

A nice review of the work done on the Mirage F-1 before their transfer to SABCA in Belgium where they are refitted for their final client in the US (in Fr but illustrated).

The five stars are for Mif/Sukhoi intercepted.

ATAC is the one more Satisfied customer (finally the F-1 got to get the [aftermarket] deal of the Century!) :

We’re impressed every day with the condition of the former French equipment (such as this engine trolley) and the obvious care the Armée de l'Air took in maintaining these beautiful aircraft. We would like to thank the French military who maintained and flew the Mirage F1!

Amazingly, among the lot Draken International got, there was an unexpected live Super 530(F?) missile:

You've to wonder how many loose 530 are still out there?

The amazingness still  keep me in awe:

"“I’ve been here for 10 years and Draken has been here since 2011, but this is a first,” Eugene Conrad, airport director said."

Casing suggests a Royal Jordanian AF from where planes were bought.

10 years and a first 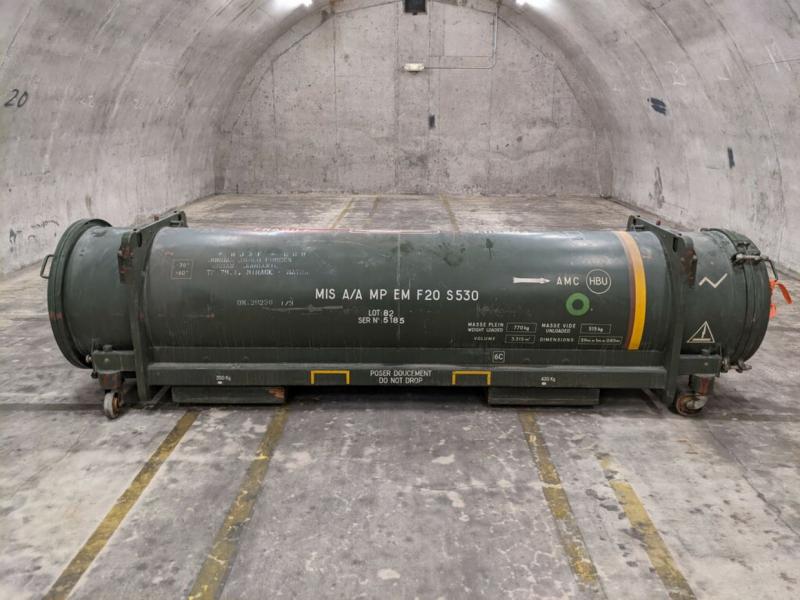 And 8 rafale to Greece