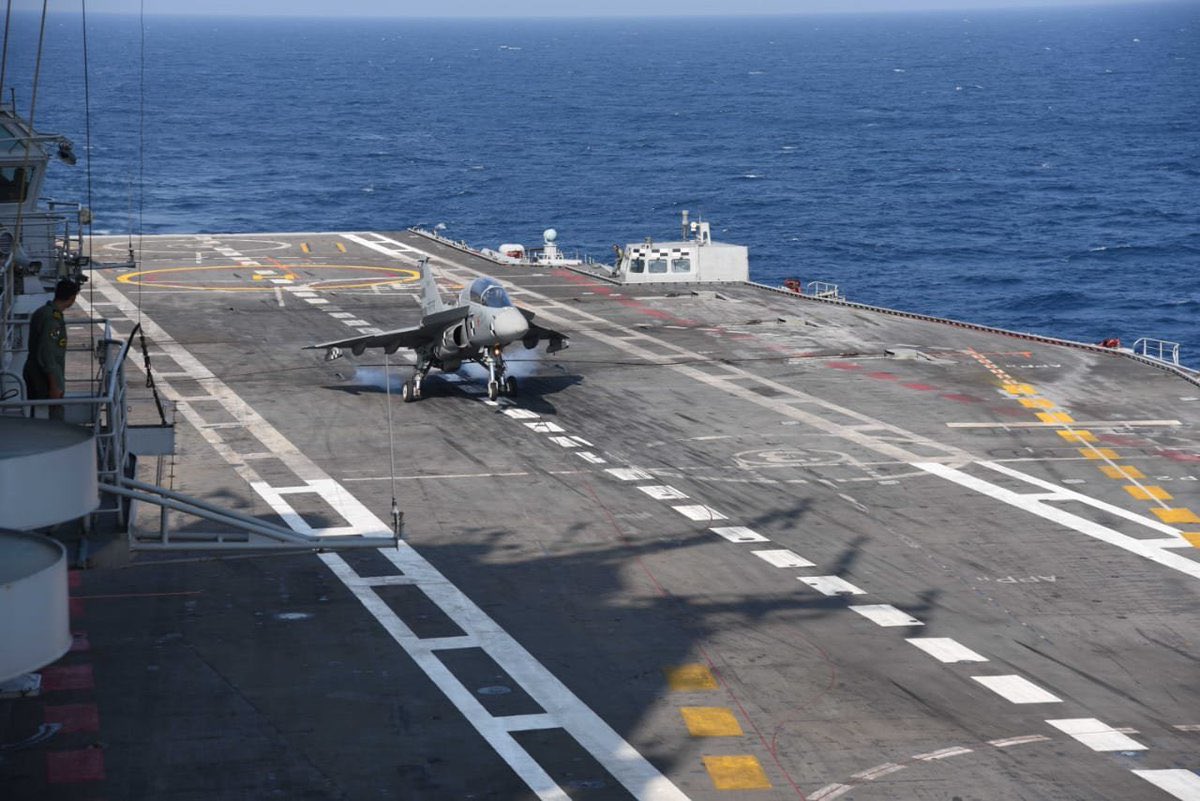 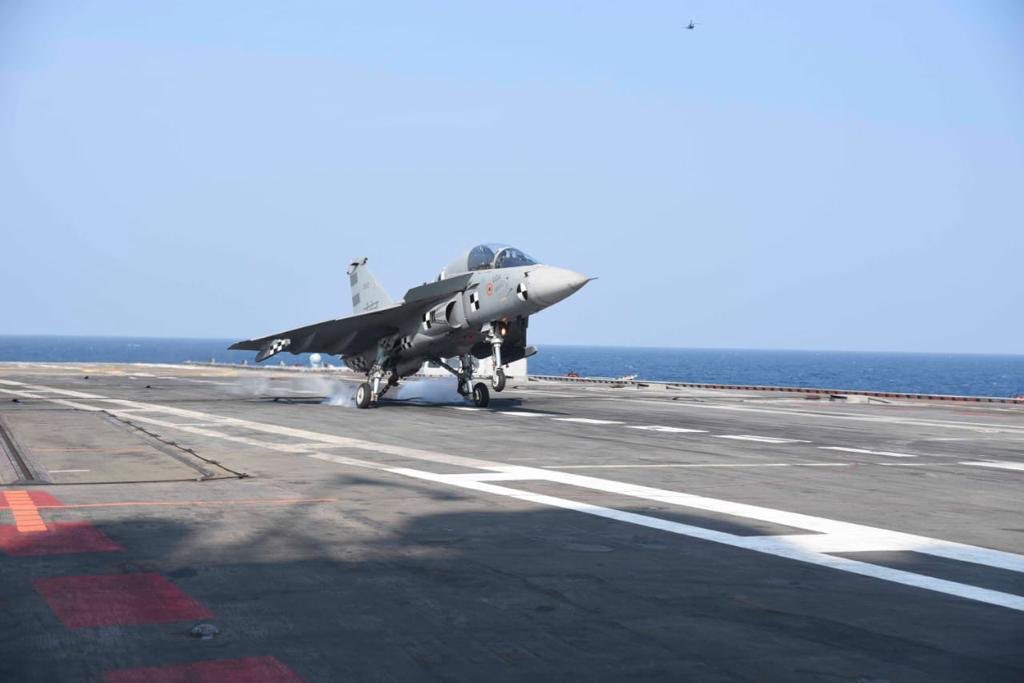 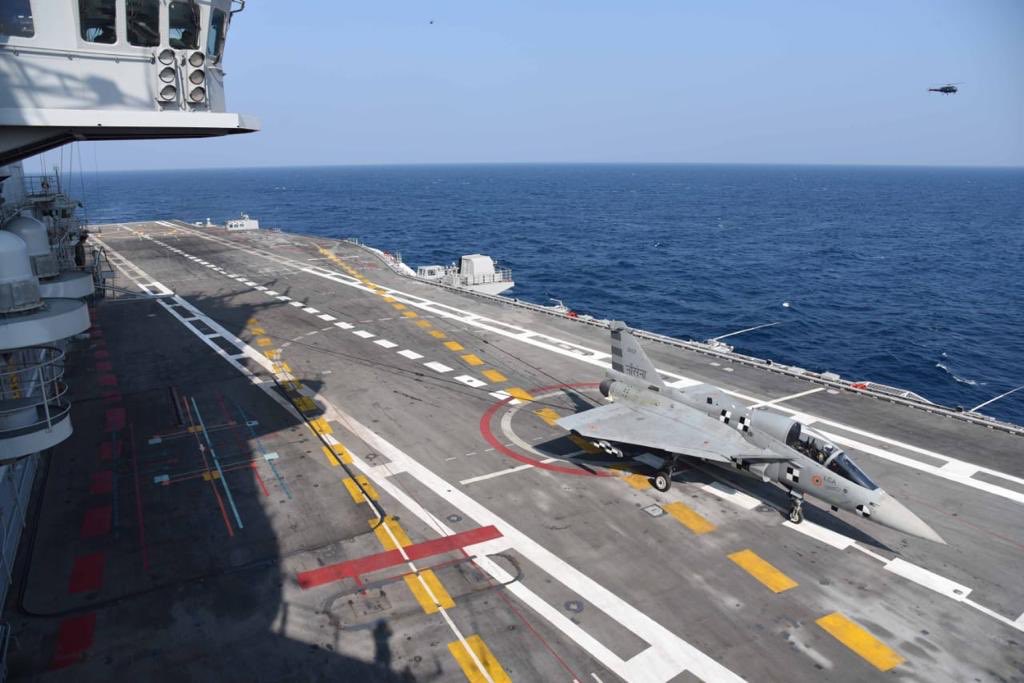 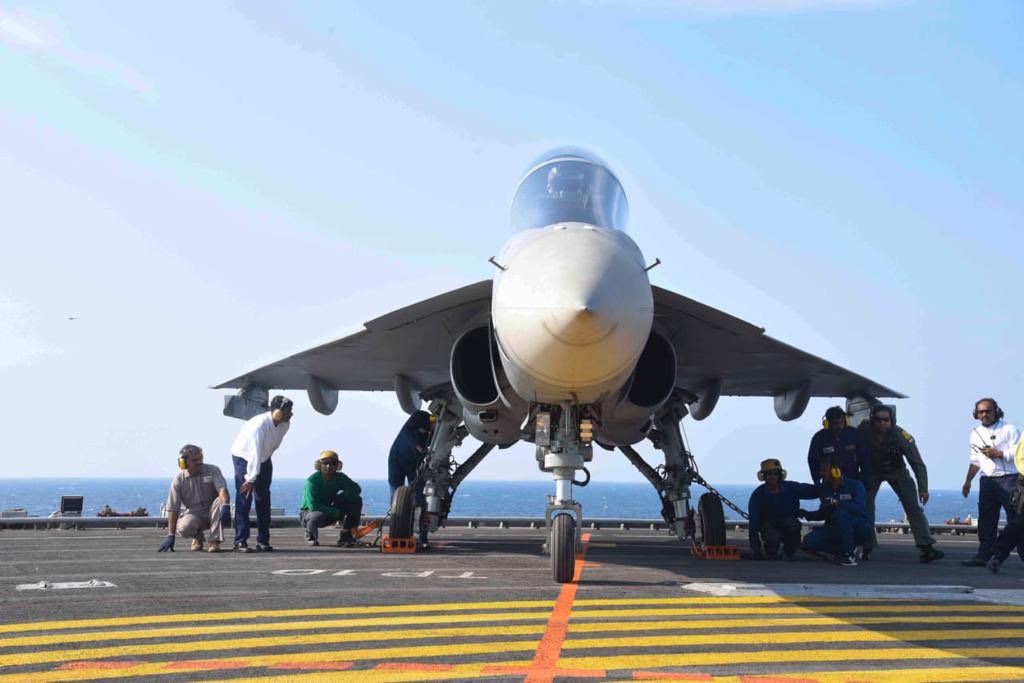 Is Kaveri effectively dead in the water now? This opinion (in my view) says it is going nowhere...

... and that India has underestimated the expertise needed to make military jet engines.

Is there any point in India dreaming of locally designed engines if India is not prepared to take the steps needed to realise such a dream? Clearly this project has been mishandled badly enough for Tejas Mk1, Mk1A, MWF, TEDBF all needing to use foreign-designed engines.  To be realistic, the same will happen with AMCA.

Can't see the point of all this thrashing around to get no result (no useful engine) and no capability of making a useful engine in the future. Perhaps India should forget about  Kaveri and spend another 20 years learning and experimenting before trying again.

The first ever take-off from an aircraft carrier, for the LCA Navy Mk1 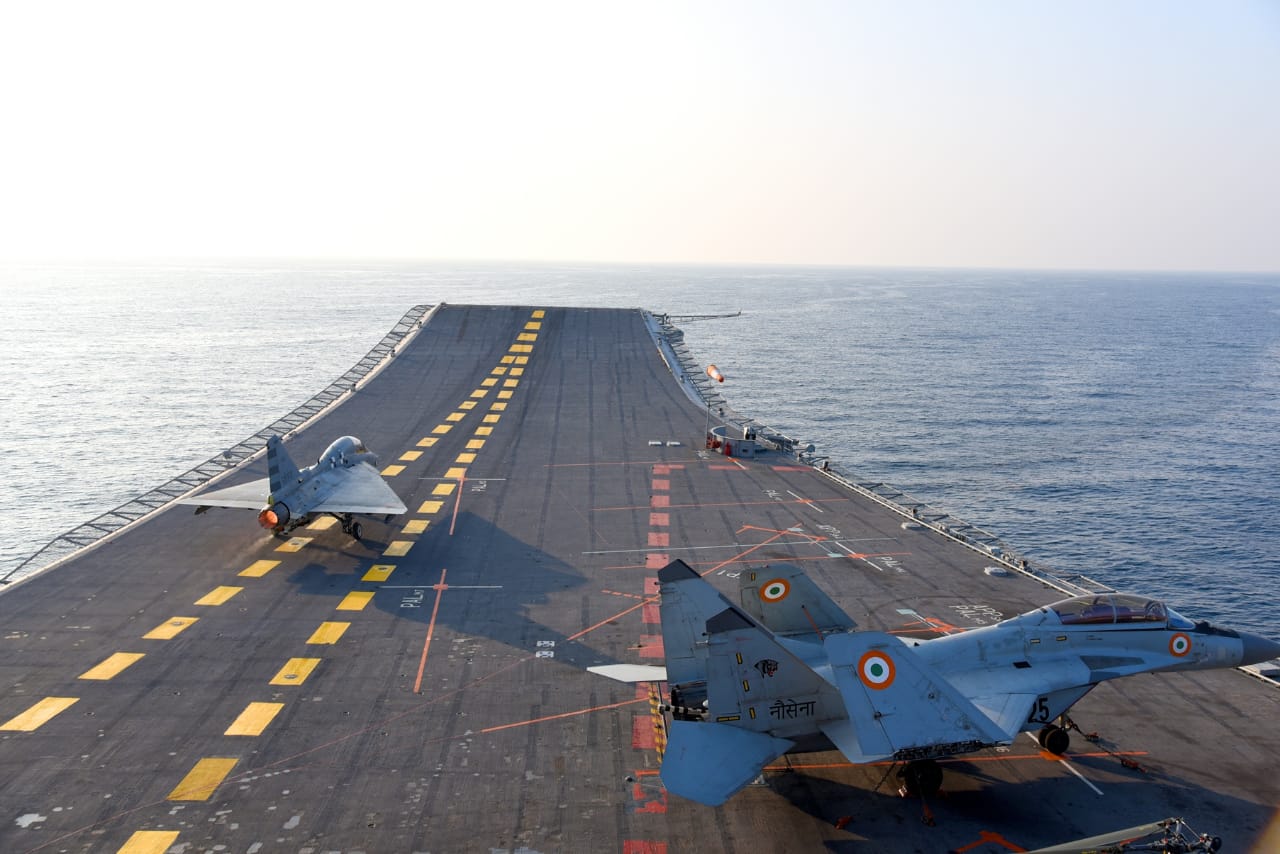 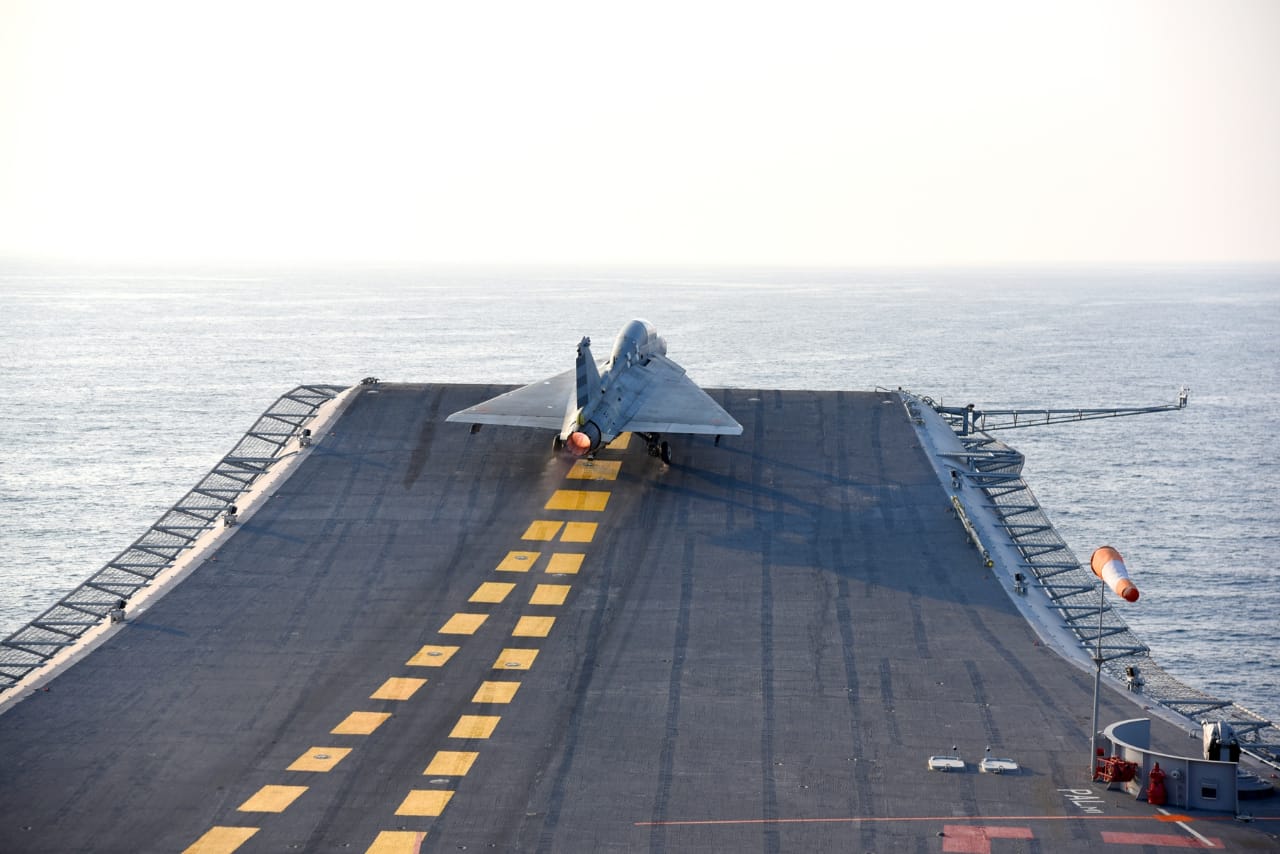 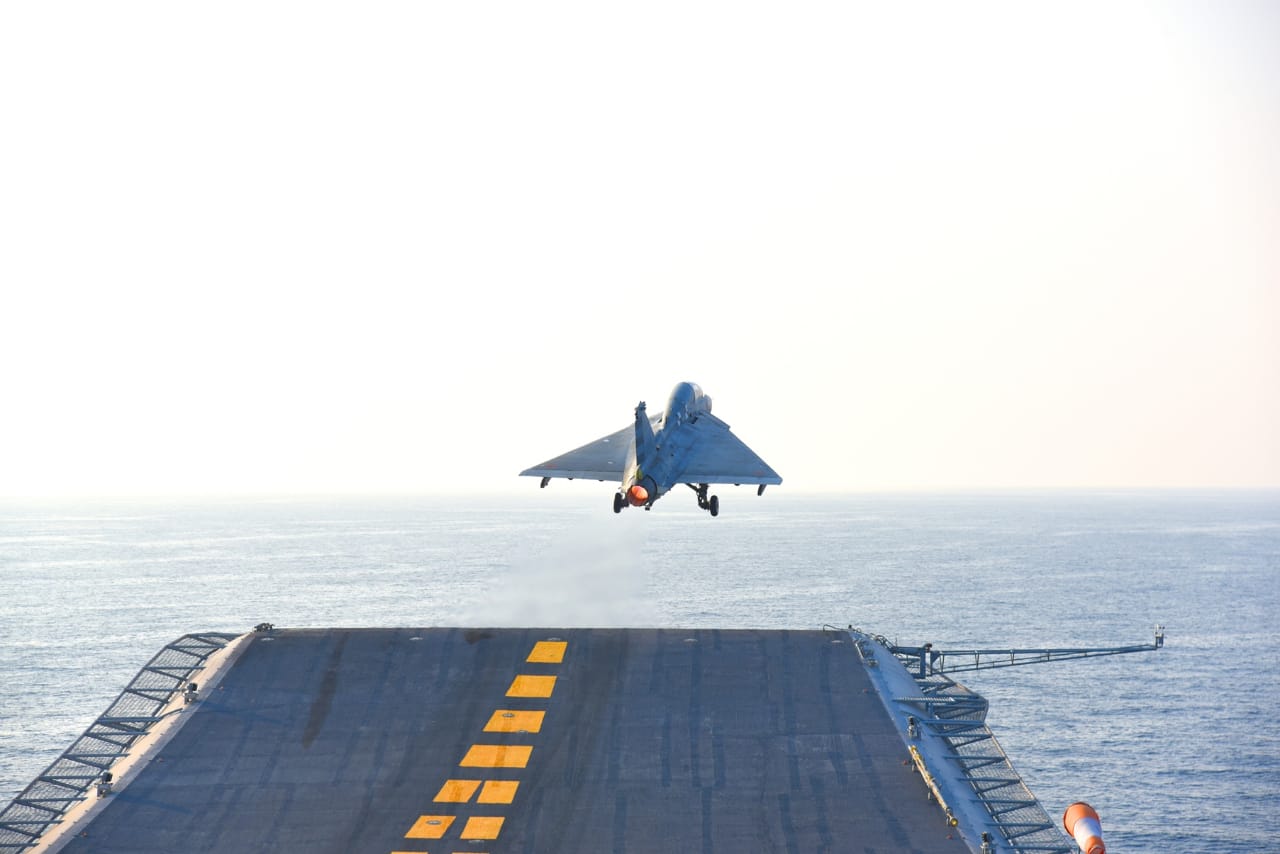 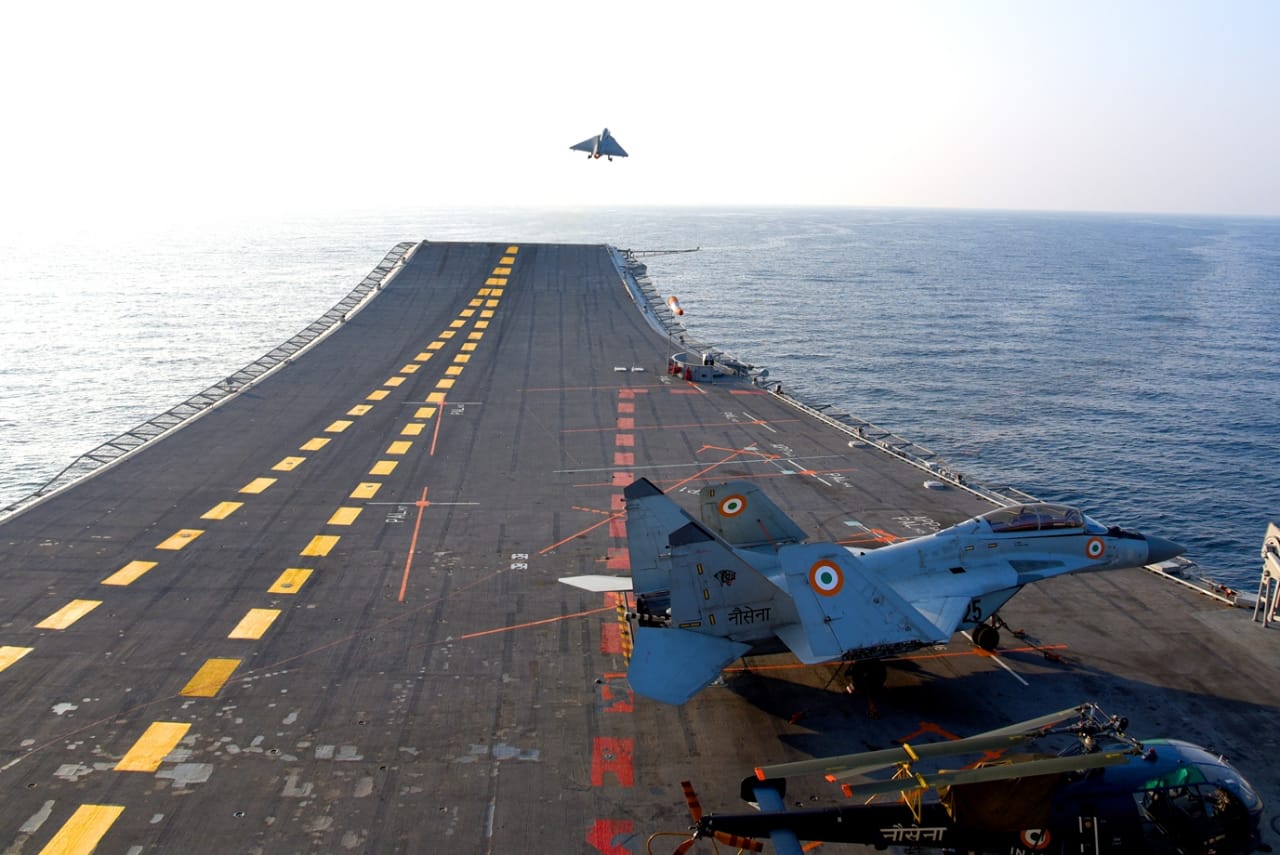 And a sort of confirmation from the Navy, that the LCA Navy Mk1 has proven niche technologies that will now pave the way for the Twin Engine Deck Based Fighter.

With this feat, the indigenously developed niche technologies specific to deck based fighter operations have been proven, which will now pave the way to develop and manufacture the Twin Engine Deck Based Fighter for the #IndianNavy.

The Indian air force is likely to insist on a clause for development of an indigenous aero engine when it clears a multi-billion dollar programme to go ahead with the next generation Advanced Multirole Combat Aircraft (AMCA) by the Defence Research and Development Organisation (DRDO).

While I appreciate forces would prefer a reliable source for equipment (supplies that cannot be interrupted for political reasons) I find it unusual that an air force should specify the source of supplies.

Sources said that while the first two squadrons of the AMCA will be powered by a variant of American origin GE 414 engine, the project will be clearing in the coming months on the condition that a parallel process be initiated by DRDO to develop a aero engine plant with foreign collaboration. “A clear path towards developing our own aero engine is essential and should be done along the AMCA programme which is being supported. If needed, foreign collaboration from western nations that have advanced technologies can be sought,” senior officials told ET.

It is not a question of India seeking foreign help if reeded. It is precisely because India is not capable of producing a suitable aero engine itself that foreign help is absolutely required. USA, France, UK will have spent hundreds of billions  over the decades getting to the technologic position they are in. And India thinks a few hundred million will buy enough knowhow for Indian engineers to make Kaveri work? More like a few billion, I am afraid to say - if such a ToT is allowed at all by the foreign government concerned.

One alternative would be to get a team of the best, most knowlegeable, foreign programme managers and engineers with experience in the field to take over the programme. Will still costs billions to acquire the minimum knowledge to build engines but it might be possible to develop Indian engines in 10 years or so.

The second LCA Navy prototype, NP-1 has also landed on INS Vikramaditya and conducted multiple bolters, landings and take-offs along with hot refueling on the carrier.


#NLCA NP1 has also completed arrested landing and take off in sucession now from #INSVikramaditya. It was piloted by Dax -- Capt Shivnath Dahiya.


Confirmations now come in that Dax made another landing on #INSVikramaditya flying NP1, minutes after his first touchdown. As this tweet flies out, hot refueling on ship is on for more sorties. Some action there folks!!

https://twitter.com/writetake/status/1217020700067688448
[quote]NP1 took off around 1.30 pm & did over shoots for practice followed by trap. Hot refuelled took off & did one more trap. Hot refuelled & returned to base. So 2 arrested landings & 2 ski-jump takeoffs from #INSVikramaditya in a single sortie. 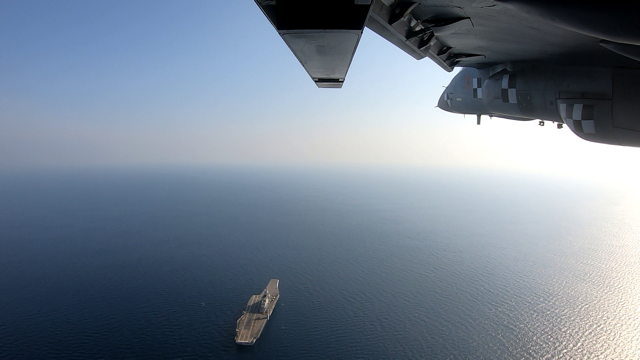 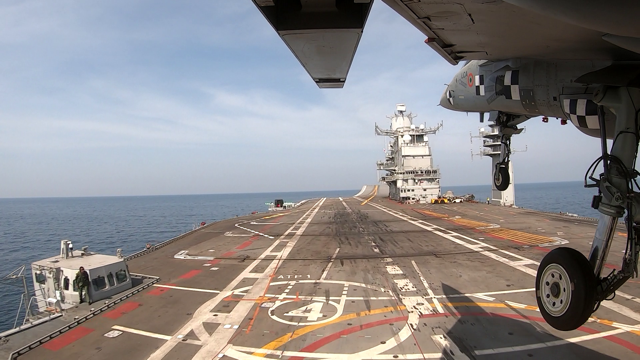 Frenetic pace of testing. In just 4 days, 18 cycles of landing, hot refueling and taking off from the carrier, between prototypes NP-1 and NP-2. Looks like a whole lot of data is going to be available for DRDO and NFTC to pore over after the carrier compatibility trials are over.

Pretty much confirmed that the Tejas Mk1 and Mk1A will get the indigenous Astra and Astra Mk2 BVRAAM weapons and not the Meteor from MBDA. Apart from the cost of the Meteor, MBDA wanted India to share code and actual examples of the radar that would be used on the platform on which the Meteor would be integrated. They weren't comfortable with the Elta 2032 MMR on Tejas Mk1 and the Elta 2052 AESA on the Mk1A.

Astra BVRAAM integration on the Tejas Mk1 has begun.

Air Force's LCA to get Astra, not Meteor

NEW DELHI: The Air Force is keen to make the indigenous Astra missile its standard long-range weapon for fighter aircraft and is promoting its integration on board the Light Combat Aircraft (LCA) as well as other platforms, top officials have told ET.

The LCA will not bear Meteor — beyond visual range air-to-air missile (BVRAAM) — that is standard on the Rafale fighter jets, with the French side expressing its reluctance to integrate the weapon with an aircraft equipped with an Israeli-origin radar and the Air Force determined to bring down the heavy imports bill by selecting a home-grown option.

“We are not even looking at the French option. We want to promote the indigenous system and have it equipped across all our platforms. The Astra development programme has been satisfactory,” a top official said.

Sources said after the missile is inducted into the Su30MKI fighter jets from which it has been tested, the system would be integrated on other foreign-origin combat aircraft. The performance of the Astra, sources said, is regarded to be better than similar Russian systems currently in service.

User trials for Astra have been completed and the next stage, DRDO officials say, is for the first production order for the missile system. On board the LCA, integration tests are being carried out and the missile is likely to be part of the weapons package for 83 of the Mk1A version that is set to be ordered shortly.

Currently, the missile has a range of over 100 km and has been successfully test-fired against Banshee target aircraft simulating all possible threat scenarios. In the most recent user trials last September, the missile was launched with a warhead against manoeuvring targets that were neutralised, including a direct hit of the target at maximum range.

A great interview with Grp Cpt Rajeev Joshi, Tejas test pilot on flying and fighting in the Tejas Mk1

What is the best thing about it?

“The small size and the good sensor package. The ability of the avionics design to absorb changes and upgrades seamlessly is a positive advantage. The biggest strength of the programme comes from the fact that the design and integration is indigenous. This gives the aircraft the ability to match the best in terms of features, utilities and modes. Small size and low (radar) signature, coupled with a good sensor package, puts the Tejas in a good advantageous spot with respect to bigger birds. The typical ‘first look, first kill’ works very well for the Tejas in a fight, both in the beyond visual and the visual realms. The Helmet Mounted Display System works well in a snap engagement and the coupled missile ‘line of sight’ (LOS) modes allow the first shot to be good. The HMDS is a very versatile piece of equipment for a number of tasks. The handling of the flight control system is fabulous and is being refined continuously. Based on the operational feedback from the fleet, the build up of rates is being refined to make it crisper and yet more responsive. In this area too, the 100% indigenous flight control system is a winner. It’s ours, and can be tweaked continuously. The process is very robust and the feedback about handling and what would ‘feel’ better is addressed very quickly. The full authority Auto Low Speed Recovery makes the aircraft truly carefree, more so than any other fighter in the world. This may be contested, but I’m willing to defend this position in a debate! The ALSR and other higher control law modes put this a notch higher. Throw it around as much as you can — when she says ‘no’, she will take over and recover the situation for you. The control and handling in high gain tasks like aerial refuelling is superb. It will beat contemporaries or older birds in this area. It really makes you feel like a great pilot!”

“Ironically, the size! It invariably tends to get compared to its bigger cousins in the business. The size essentially limits internal fuel and hence the shorter legs as compared to others. However, if the focus is kept on the fact that it was intended as a light fighter, the fuel fraction is reasonable. The ‘404 and aircraft combo is frugal, and with external tanks and a high flow-rate aerial refuelling system, it’s ok…..”

How would your rate Tejas in the following categories:

A. Instantaneous turn
“Snaps into it! However, the traditional drag of the delta platform does start showing after a while.”

B. Sustained turn
“Mid mach numbers and mid altitudes, good. Like an aircraft of its size, affected by stores carried.”

C. Acceleration
“Climbs well, and the acceleration is good. The continuing refinement in the drag department is an ongoing process which aims to make this better still. With every drag count being ‘counted’ with a fine tooth comb, it will only get better”

D. Climb rate
“Reasonable and meets the specs laid out.”

E. High alpha performance
“Fabulous! Difficult to enter a difficult situation with respect to this… a very robust control law makes the Tejas a winner here. Do remember though, that comparisons with its thrust-vector control- equipped Russian cousins would be unfair here. The nose holds up well in low speed fight, and the ALSR makes you trust the aircraft. High angles of attack manoeuvres and reversals are comfortable, albeit with a little ‘barrellish tendency’. Though like any flight control system controlled fighter, the rate of roll and pitch rate does go down with high AoA and/or high pitch angles.”

How does it compare with other fast jets you have flown? Which aircraft has most similar flight characteristics?

“A lot of inspiration for the Tejas came from the Mirage 2000. Of course, the Mirage was a worthy template to look up to, and hence it is quite like it. Flight characteristics-wise? Closest to the Mirage 2000. Lovely similarities in feel and handling. 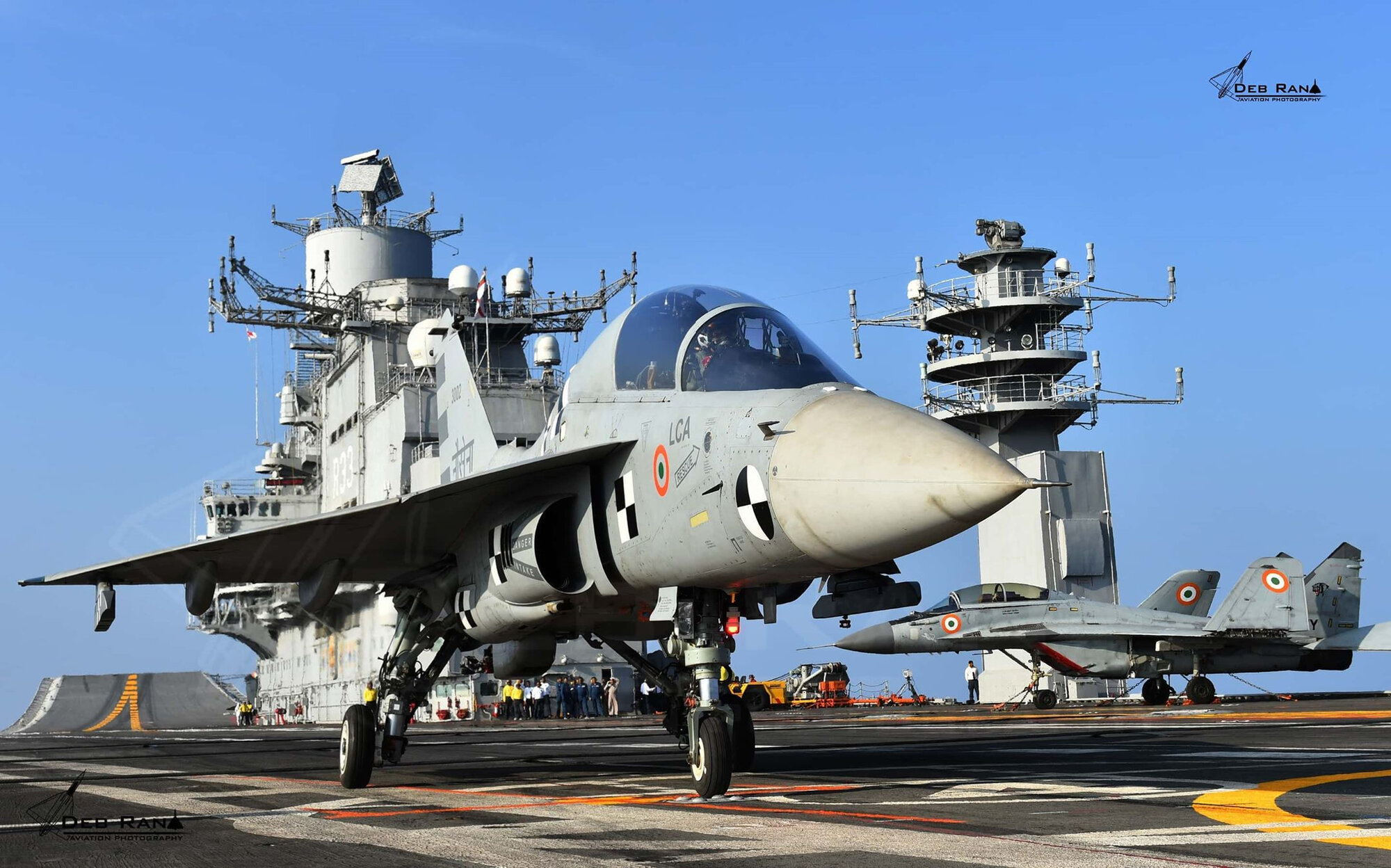 Regarding the re-designed landing gear, did India buy the knowhow or will any TEDBF need foreign input for successful landing gear design?

I don't know what you're talking about..redesigned landing gear designed with the help of Rafale offset contract? Says who? HAL designed the original overweight landing gear and then had to re-design it as well. No foreign help was sought, as far as I know.