B-25 unveiled for veterans

N6578D achieved fame in Spain and the UK during 1968 as the so-called ‘Psychedelic Monster’, when it wore a bright, multi-coloured paint scheme while being used as the camera ship during production of the film The Battle of Britain. It was operated with the nose art Lucky Lady by Dan Powell from Boerne, Texas, between 1994-99, after which the medium bomber was stored outdoors at Franklin, Virginia. It was acquired by Peter Smythe/Reevers Warbirds in 2015 and shipped to Adelaide for restoration.

Among the veterans at the ceremony was 93-year-old Hans De Vries, who flew B-25s from Batchelor airfield in Australia’s Northern Territory on ‘seek and destroy’ low-level shipping attack sorties. In November 1943 this joint Dutch/Australian bomber unit began targeting Japanese supply routes to north-eastern Papua New Guinea, and sank more than 25,000 tonnes of Japanese shipping. On 23 June 1944, during an offensive sweep of shipping north-west of the Indonesian Kai Islands, a B-25D co-piloted by the unit’s CO, Lt Col E. J. G. Te Roller, was shot down, with the loss of all six on board. 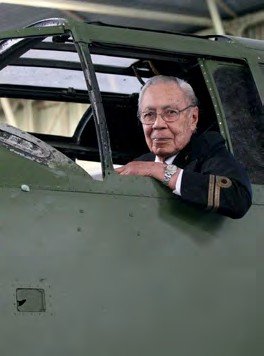