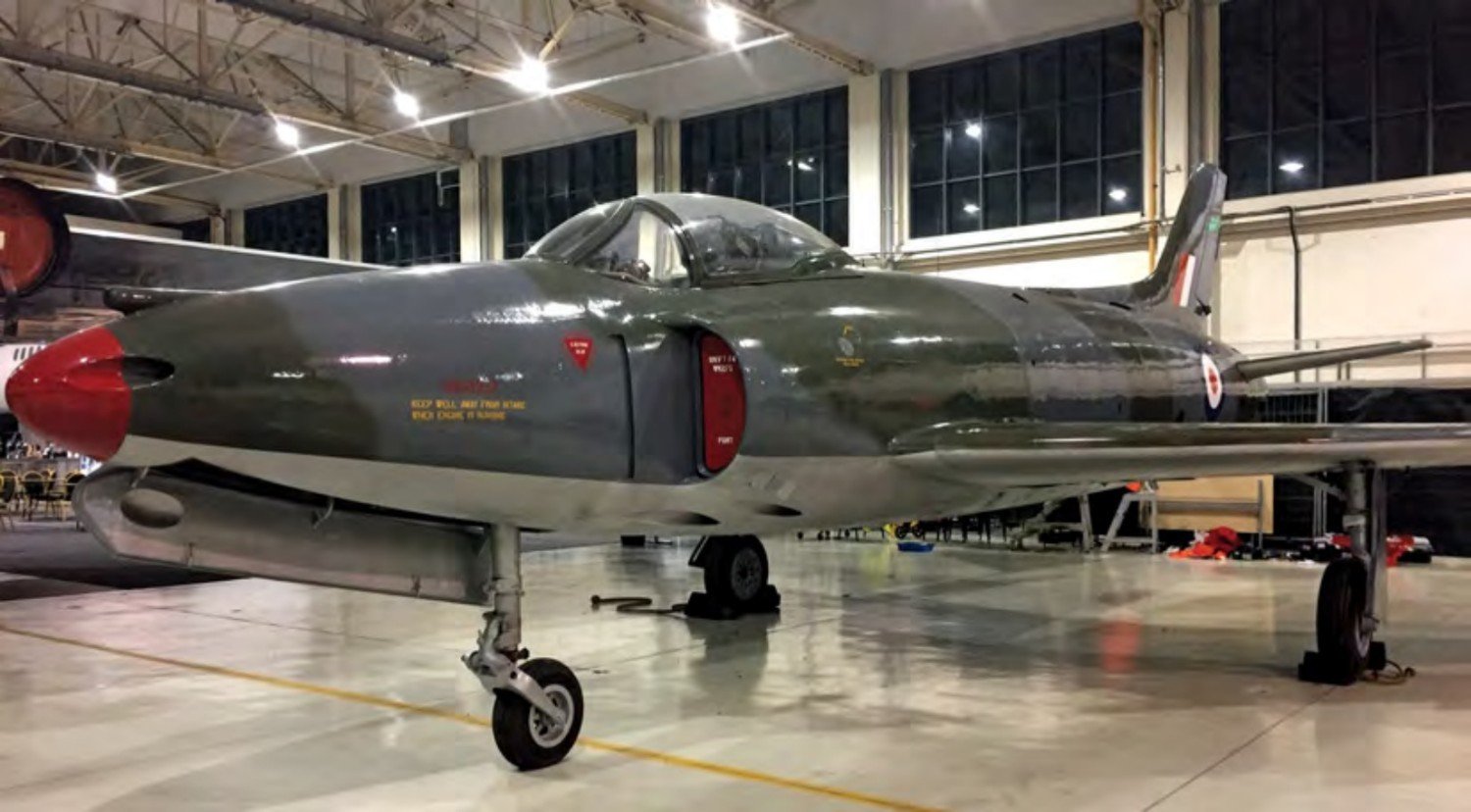 Fresh from restoration with Jet Art Aviation at Selby, North Yorkshire, Supermarine Swift F4 WK275 was moved to Robin Hood Airport near Doncaster, South Yorkshire, on 22-23 November. It will go on display in the Vulcan to the Sky hangar alongside Avro Vulcan B2 XH558.

The fighter — one of only four complete Swifts surviving — has been meticulously restored over the last four years on behalf of its owner after spending more than three decades displayed in the open at Upper Hill near Leominster, Herefordshire.

Jet Art boss Chris Wilson, a former RAF engineering technician who spent two years with the Red Arrows, says: “One of my team described the project as a ‘can of worms’, where you create one job and create four more. I think that’s a fair assessment! We’ve worked on the airframe for the entire time it’s been with us, but with varying degrees of activity. Once the aircraft had been split apart, engine removed and paint stripped, we started the process of finding and repairing corroded and damaged areas.

“This is a very rare aircraft, so you can’t find some of the things you need. We had to ‘think outside the box’ to find a replacement canopy. After much searching, one was located from a simulator, which the owner [of WK275] was able to purchase.

“The Perspex panels in the windshield all needed replacing, and getting the old ones out was a difficult task. The removed panels were used as moulds for the new Perspex, which was blown for us by an external company.”

The Rolls-Royce Avon has not been put back into the airframe, but will be displayed alongside the fighter. Chris continues: “In the cockpit, we’ve done very little, as it’s a time capsule with the original instruments and controls. We have replaced the ejection seat, as the original was heavily sun-bleached and in a sorry state, with all the canvas webbing rotting away.”

The port wingtip, top of the rudder and the ailerons all needed major repairs, and the magnesium alloy nose wheel was beyond saving, but a replacement was sourced. Chris said: “A lot of parts we could not source, so they had to be made.”

During November, Dr Robert Pleming, the Vulcan to the Sky chief executive, announced that the airport authority at Robin Hood has required VTST to move to a smaller hangar, saying: “This will impose financial pressures and the short-term challenge is that the lack of facilities in the smaller Hangar 1 will make it difficult to continue the vital cashgenerating businesses until we have the funds to invest. Adding the costs of physically moving everything from an environment where VTST is well-established means that VTST is cutting its financial commitments by around 30 per cent to put it on to a more sustainable basis for the future.

“For the time being, all our available resources will now be focussed on XH558. As is well known our next objective was to achieve the same success as the Vulcan with the recordbreaking English Electric Canberra B2 WK163. Unfortunately, the aim of returning this remarkable example of British technical and aviation achievement to the skies has so far attracted less support than we had anticipated. As part of the transformation of VTST, we will set up the Canberra Restoration Project as an independent activity with its own fundraising campaign. This means that our ambition to return WK163 to British airshows in time for the RAF centenary celebrations in 2018 may not now be possible.”