Running late: US airpower in the FY2020 budget

RUNNING LATE: the FY2020 budget request was supposed to be delivered to the Congress at the start of February. It appeared in mid-March, cutting down the time available to pass a budget and the Defense Authorization and Appropriation Bills, both of which are supposed to be signed into law by the time FY2020 starts on October 1, 2019. In 2017, Patrick Shanahan, the former Boeing executive who is now the acting Secretary of Defense, promised the FY2020 budget request would be this administration’s masterpiece. It may also be its high-water mark.

The top line Department of Defense budget request is $750 billion, a substantial increase from the $719 million in FY2019. The Budget Control Act caps – which led to sequestration – are back after a two-year hiatus. On March 13, Secretary of the Air Force Heather Wilson warned the Senate Appropriations Committee that sequestration would erase all the gains made over the last three years.

The Democrats, now a majority in the House of Representatives, have been moving to the left and are interested in cutting defence spending, anxious to be seen as opposing the president and also, for many, their party’s own leadership.

This includes nuclear modernization, with the Long Range Stand Off missile, intended to replace the AGM-86 Air Launched Cruise Missile, being identified as a potential target. Indeed, the budget submission contains much that is likely to lead to bitter disagreement both within and between the House and the Senate, still with a Republican majority.

This is the first new budget since the 2018 National Defense Strategy (which prioritised great power competition), the Nuclear Posture Review and the Missile Defense Review. The FY2020 budget is claimed to fund a new relationship with the industrial base and investment in key emerging technologies. Artificial intelligence ($900 million), unmanned technology and autonomy ($3.7 billion), hypersonic technology ($2.6 billion), directed energy ($235 million), and many other areas all of which competed for the $104 billion in research and development funding, a $9 billion increase. While the progress towards an operational test of hypersonic technology in the near-term future is attracting much of the attention.

Speaking at a briefing in Washington DC on March 15, Assistant Secretary of the Air Force for Acquisition, Technology and Logistics, Dr Will Roper said he was desperate for the Air Force to place AI into operation because there is so little of it in the operational force. 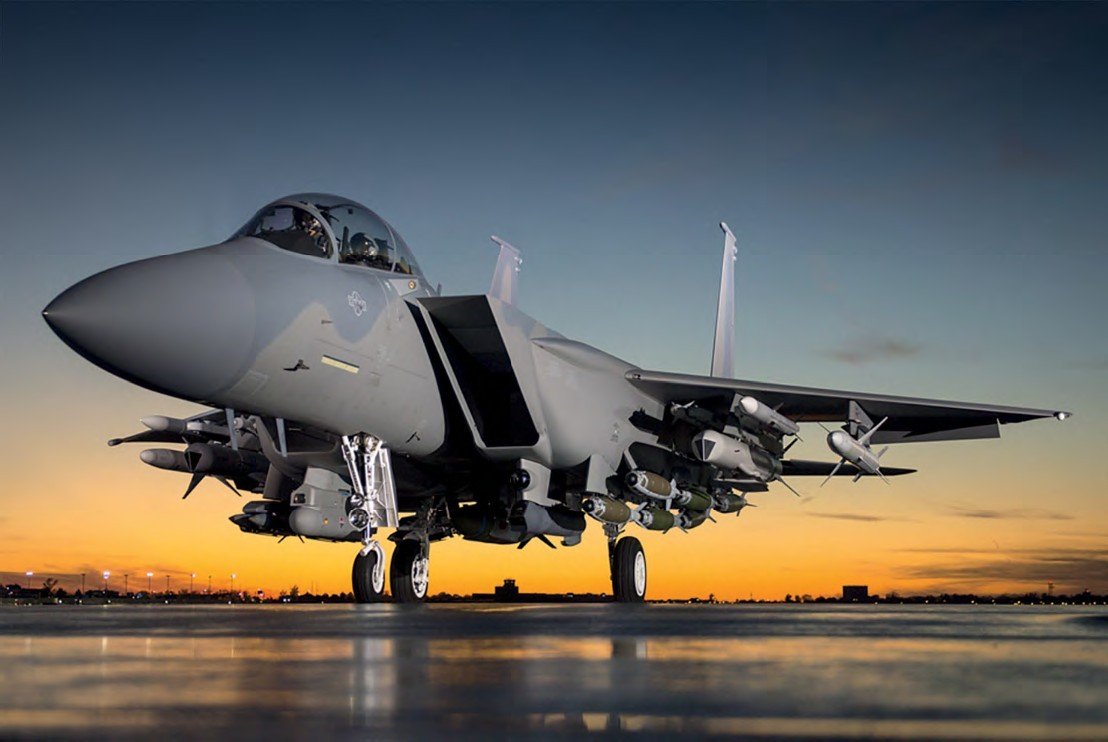 This Boeing image features a current variant of the F-15 Strike Eagle tooled-up with enough munitions and missiles to fight a small conflict on its own.

The Air Force budget request did not fund any increase to its current 312 operational squadrons to its aspirational goal of 386, although Air Force Director of Strategic Planning, Major General David Krumm, said during a briefing in Washington DC on March 14 to expect some growth in the Future Years Defense Plan, which has yet to be released.

Nor does the Air Force FY2020 budget request contain any procurement money for the light attack aircraft programme that it had previously pushed the Congress to approve. However, $35 million was requested for continued experimentation to enable off -theshelf buys of six test aircraft; and a cool $400 million procurement funding for light attack aircraft was postponed until FY2022-2024.

The Air Force has said for years it needs 72 new fighters a year. This year, it will not be getting them. The total number of F-35A Lightning IIs requested has been reduced to 48 ($4.9 billion), while research and development spending for the F-35 - especially its Block 4 upgrade - has been increased by over 50% to $800 million. The number of F-35As included is enough to equip two fighter squadrons.

Eight new-production Boeing F-15EX fighters (for $1.1 billion) were included; 144 are planned, 80 by FY2024. The F-15EX is increasingly controversial. On February 28, Secretary of the Air Force, Heather Wilson, told reporters that when she signed off the Air Force’s FY2020 budget submission and sent it to the Department of Defense for approval, there were no F-15EXs in it. This statement appears to reflect widespread unhappiness over the F-15EX among senior Air Force leaders, anxious to increase fifth-generation combat aircraft. It will inevitably sharpen Congress’ scrutiny of the programme.

The number of Boeing KC-46A Pegasus tankers, planned to be at a steady-state of 15 per year, was reduced to 12 to make up for three the Congress added last year. The number of Lockheed Martin special ops AC-130J Ghostrider and MC- 130J Commando II aircraft was reduced to eight from a planned 13. General Atomics MQ-9 Reaper unmanned air vehicles, planned at four, was increased to 12. Two types appear in the request as planned; 12 Sikorsky MH-60W combat rescue helicopters and one Gulfstream EC- 37B Compass Call II. In research and development funding, the big winners are the Northrop Grumman B-21 Raider bomber; the $3.0 billion requested marks an increase of almost 50%, not counting funding in black world classified programmes. The Next Generation Air Dominance programme – which could include a sixth-generation fighter and loyal wingman unmanned air vehicles – increased by over 50% to $1 billion. 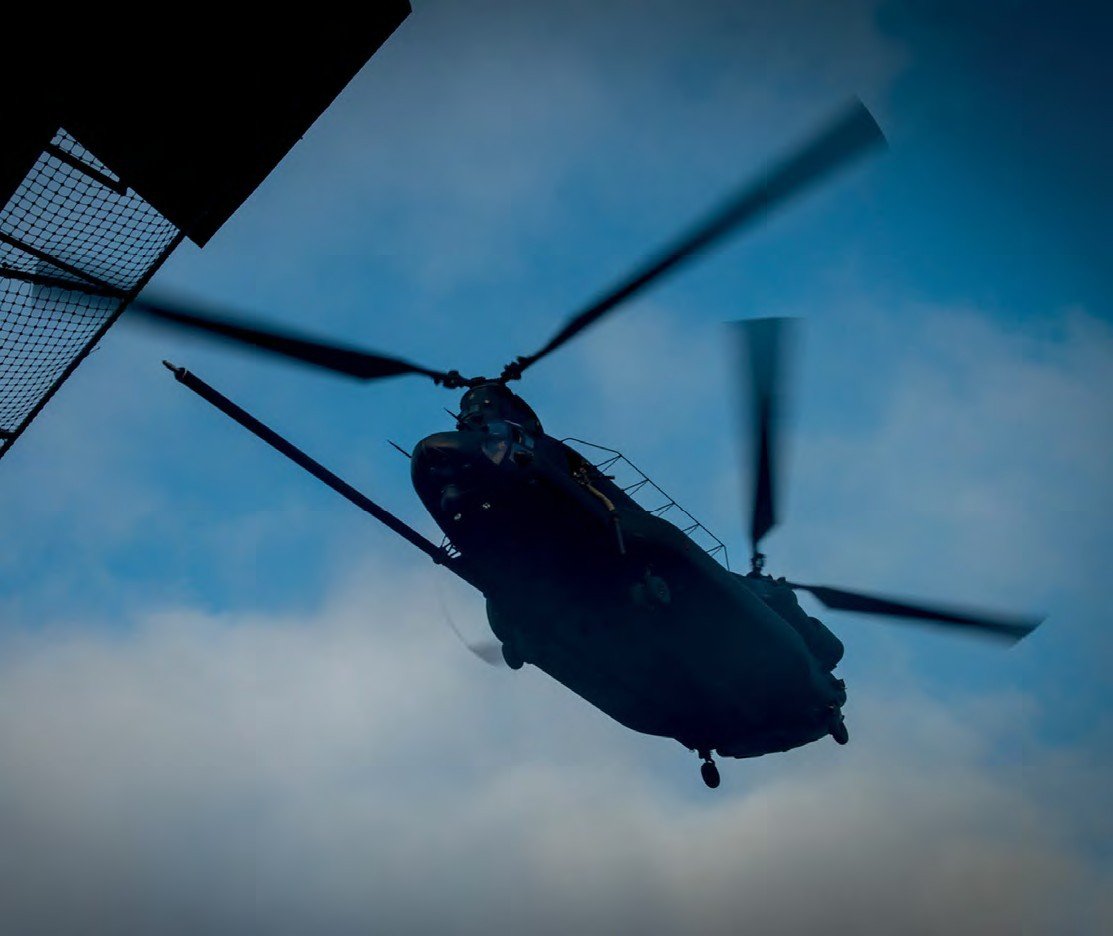 Procurement funding for Army aviation decreased to $3.7 billion from $4.3 billion, although an additional 15 UH-60M Black Hawks are added, increasing the buy to 73 (64 for the Army National Guard). The number of CH-47F Chinooks increased from seven to nine but the number of AH-64E Apaches (all rebuilt D models) held steady at 48. The new Future Attack Reconnaissance Helicopter programme requested $427 billions of research and development funding. Special Operations Command (SOCOM) needs its MH-47G Chinook fleet upgraded, starting soon, and the Department of Defense added this urgent operational requirement to the budget. But the CH-47F Block II upgrade is not included in the request, its required funding is instead the bill-payer for developing new high-performance rotorcraft.

The Department of Defense’s Directorate of Operational Test and Evaluation (DOT&E) submitted its annual report about its activities for FY2018 on time, in February. Unsurprisingly the F-35’s entry is the largest in the report.

This trend will have to change to achieve the objective that former Secretary of Defense, James Mattis set in 2018; attain 80% mission capable rates within a year. The F-35’s ability to do so, however, has been enhanced by a decision, announced after Mattis had left the Pentagon, that the 80% target only applies to combat-coded aircraft. This means F-35s that are the least flyable will not be counted. These tend to be aircraft from early low rate initial production lots which are used for training or research and development.

The OT&E report was unimpressed by the F-35’s Continuous Capability Development and Delivery (C2D2) initiative. Both the F-35 Joint Program Office and Lockheed Martin are relying on C2D2 to enable a more rapid development, testing, and fielding cycle for capabilities that are to be integrated as part of the F-35 Block 4 upgrades, and to address unresolved deficiencies from the F-35 System Development and Demonstration phase, which ended in 2018.

The DOT&E report considered the current C2D2 schedule as high risk due to the large amount of planned capabilities included in each six-month increment.

After extensive delays, any sense of relief after the first delivery of Boeing KC-46A Pegasus tankers proved short-lived. An indefinite delay was placed on further KC-46 deliveries on March 1 after tools and other foreign objects were found in aircraft already delivered.

The Air Force is still examining the KC-46A aircraft involved for other defects. Boeing submitted a 13-step corrective plan. Deliveries were restarted on March 11, with a new KC-46A flying to the training schoolhouse at Altus Air Force Base, Oklahoma.

After high-level meetings with Boeing, Assistant Secretary of the Air Force for Acquisition, Technology and Logistics, Dr Will Roper was quoted as saying on March 13, “Boeing understands it’s got a severe situation that’s going to take top-level engagement from its company. They are committed to doing that.”