What IS this on this Liberator’s nose?

What IS this on this Liberator’s nose?

I have recently been trying to tabulate the work history of a particular BOAC Liberator on the Return Ferry Service across the North Atlantic in WWII.

I settled on AL614 for no other reason than I was given a photograph of it many decades ago.

In this photograph, AL614 has an unusual appendage on its nose. This is shown in the attachment

I have seen just one other photograph of AL614, a small part of a panorama shot at Prestwick showing dozens of aircraft. AL614 no longer wears its war-paint and its later call-sign (OLZN) is visible on its nose. Though the quality of the image is not great, the appendage can be clearly seen.

The attachment shows the the appendage in the two photographs mentioned.

My question is this.  Can anyone tell me what this appendage is called, what it is for and, if possible, when it is likely to have been fitted?

Is anyone able to help?

At first, I thought it was a shadow underneath but the more I look at it I think it's a hatch with an upward-hinging door.

I'm sorry. It's my fault. I wasn't sufficiently specific but you are quite correct, moth minor, in your deduction.

I attach a much expanded detail of the hinged cover to the hatch in the 'war-paint' photograph. You can see the lip on it, allowing it to be  folded down flush with the fuselage. The gradation of tones inside the hatch indicates its interior and the paler strand, at the bottom of the hatch entrance, adds to the  visual impression.

I was more interested in the 'thing' (for want of a better word) aft of that and sticking out from the fuselage.

It can also be seen, albeit a bit fuzzier, in the 'bare metal' photo attached to my opening post..

If you mean the twin 'Horns' protruding from both sides of the nose then they are twin Pitot Tube/Pressure Heads - I have attached a different angle of pic below.

Later replaced by a single Pitot on the lower left side of the nose on some B24's.

Thank you, bazv. I'm sure you're right.  I'm no expert on Liberators, as you can see, and have kept mostly to transport versions..

The 'appendage' on AL614 seems to stick out quite a way from the fuselage to me.

I attach an image showing AL614 and the noses of a couple of other transport Liberators, for comparison purposes.

Maybe it is a trick of the light or the viewing angle that are fooling me.

Hi Ian - I think they are all pitot/pressure heads but that there are various versions/modification standards and therefore they are bigger/smaller/different positions .

Your latest pics clearly show the pitot head on the end of the mounting mast for a/c G-AGKT + AL507 (top R+L pics).

As I posted above - some of the bomber versions had a much smaller pitot/mast on lower left of nose.

Thank you, once again, bazv, for your response. Once you know what to look for, it becomes clearer.

On the side view of AL614, , it seems to have a vertical spike on it, as seen in a flash of sun reflection and in the shadow on the fuselage. Is this common?

Yes Ian - the original type of B 24 pitot head had a little vertical 'Fin',later  the smaller standard G-2 Pitot was fitted.

I have attached a pic below of the 'Fin' type

Edit - also added a large thumbnail in the next post. 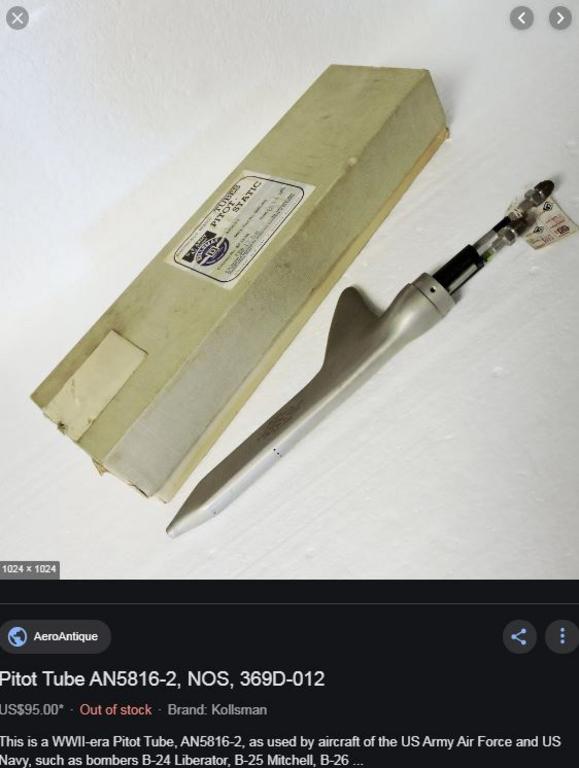 Sticking the pitot(s) that far out into free air is what would be expected from a trial to check the pressure error correction in the standard position.  As this airframe ever used for such a trial?

Many thanks, once more, bazv.  I think it was the extent to which it stuck out from the fuselage on both sides that I found unusual.  Maybe, from your knowledge, it was not so unusual but, to me, it was, so I am grateful for your help.

Graham, I have found nothing specific to indicate that AL614 was involved in any kind of  trial. However .........

......... It was "off the road" in Dorval for the whole of March 1945 and a few days either side. During this period, there are references to "mods" but nothing specific.  Perhaps there are archives in Canada that could provide an answer.

Meanwhile, there is apparently a photograph of AL614 in the Oughton book on Liberators, which I do not have. My note says it's on Page 112. If anyone has the book and could post a scan, it would be interesting to see if it has the appendage in question.