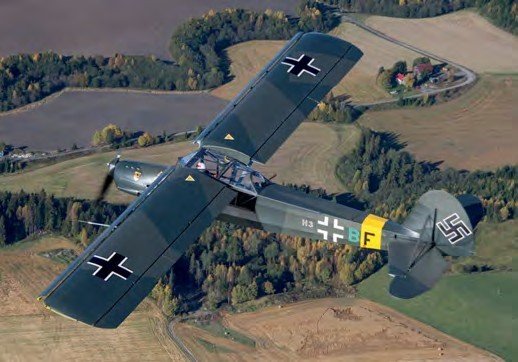 Following a 9,251-hour rebuild by owner Tor Nørstegård and a group of volunteers at a workshop in Fetsund, southern Norway, Fieseler Fi 156 Storch Werknummer 1816/LN-WNS made a 30-minute test flight from Kjeller airfield near Oslo with Tor at the controls on 7 October. A week later, after completing a further three hours of test flying, Tor ferried the machine to Eggemoen, 26 miles north-east of the Norwegian capital, where it will be stored for the winter. Tor’s team is closely linked to the Warbirds of Norway organisation, and the machine will be seen at displays in northern Europe during the 2018 season.

During October 2007 the Storch was imported to Norway in a 40ft container from Carson City, Nevada, where it had been partrestored following a ground handling accident. It has been painted in the markings of a Fi 156 based at Forus near Stavanger during December 1943 with the Focke-Wulf Fw 190-equipped Stab Jagdfliegerführer Norwegen (JG 5), and wears the eagle emblem of IV./JG 5 on the engine cowling.

The aircraft was one of the last examples of about 800 built at the Morane-Saulnier plant at Puteaux, just north of Paris. In August 1944 the partly completed Storch was abandoned by the retreating Germans, and on 23 November 1944 the blank dataplate was stamped ‘MS500 s/n 43’. It flew with the French forces during the last months of the war. Following its military career the machine was active as F-BJQB, before being sold in the USA during 1970 and registered N44FS.

The type had a long service record in Norway: photos taken at Oslo’s Fornebu airport in April 1940 show that Fi 156s flew during the early stages of Operation ‘Weserübung’, the attack on the country. Several Luftwaffe units operated the type there, and after the war at least 35 examples were taken on charge by the Royal Norwegian Air Force. Most were in bad shape, so only eight ended up being overhauled at Kjeller, after which they were given serial numbers KF-1 to KF-8 and became known as the Kjeller Storch. The last were retired from military service in 1954. At least two went on to fly on the Norwegian civil register, the final one being grounded during 1961.