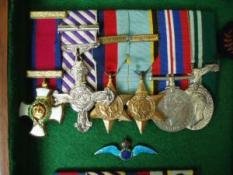 Those that attended the Aerojumble at Shoreham last Saturday, may have seen the Grub Street Publications table just to the left on entering the marquee, displaying their current catalogue of aviation books. For those who were intent on finding other aviation items (apart from books) can I draw your attention to a new title launched on that day by Grub Street, titled RAW COURAGE (Norman Franks/Simon Muggleton).
My thanks to the WebMaster and Mods for allowing this thread.

I think the contents of the book will answer the many questions raised on this forum in the past, regarding the life and death of one of the brothers in particular: Flt Lt Peter Raw DFC, a Typhoon pilot who flew with 609 and 183 Squadrons, who was KIA in March 1944.
The book revolves around a collection of letters (found in the 90's by a member of this Forum, in a South London junk shop!) between the four Raw boys and their mother, written from the time they attended Wellington School up to their tragic deaths.
The eldest three flew during WW2 and all three died.The youngest,Michael was not old enough to see wartime flying,and flew Mosquito's and Meteors post war, ending up attached to the USAF flying Delta Daggers. His last posting was flying the Spitfire and Hurricane with the Battle of Britain Memorial Flight and awarded the AFC, sadly dying at an early age. John the eldest, was killed in a flying accident whilst awaiting his posting to a fighter squadron in early '41. Tony flew Hampdens with 144 Squadron and Lancasters with 156 Squadron (Pathfinders) gaining the DFC AFC before being KIA over Germany in September 1944. Their father had been a naval Commander serving at Jutland and the Dover Patrol during WW1, and was awarded the DSC, before his untimely death in 1932. His wife, Irene was left to bring up the four boys (and two daughters) on her own, having the honour of attending Buckingham Palace on five occasions under three different Monarchs to see members of her family decorated, which must be some kind of record! There are 16 pages of photos (some not published before) and an appendix which displays examples of their handwritten letters, along with the 'missing' telegram's/AM official letters etc.

How terrible for the mother loosing her son's and husband,very tragic.Sounds an interesting book,when is it out?

Sopwith Thanks for your comment - it's published now.
I forgot to mention also that the boys had a fighter pilot Godfather, W/C Bruce Cole DFC AFC and Bar, Kings Commendation for Valuable Service in the Air.
He too was killed in a flying accident in January 1956, flying an English Electric Canberra (WT 529).

Will be purchased very soon. Thanks for the info.

Thank you SimonSpitfire for highlighting this sad story and forumites please read as it is a fascinating but tragic story.

Unfortunately one of my uncles disappeared over the English Channel on 12 Feb 1942 (Channel Dash) in a 49 Sqn Hampden some 2 months from joining the Sqn and only 19 year old. My mother never got over the loss. One of his brothers survived as an Officer in the Royal Regiment of Artillery and the other a JNCO in the RAF Servicing Commando Units (MiD) then an Officer in the Royal Air Force Regiment. I have been fortunate to serve in the modern equivalent of the commando units of Hercules C130K & Chinook. My brother also served as an aircraft engineer in the RAF.

These stories seem remote and singular but were far too common. Even now, whole families serve in the modern war zones with tragic consequences.