The complete guide to commercial aeroplanes in movies

“I wonder how many films planes have been in?” said someone on a Key.Aero work call the other week. So we started digging. And then we kept going and going. Here are the very geeky results!

How many times have you been watching a movie and thought, ‘Ooh look – they’re getting on a Boeing 737.’ And then muttered, ‘Actually that’s the wrong variant for when this film came out,’ before having a quiet word with yourself for being a bit too obsessive about the details.

As aviation geeks, that’s basically us. So when someone piped up the other day in a Key.Aero meeting with a seemingly innocent comment about how many movies had actually featured commercial aeroplanes, what started with a throwaway comment snowballed into what you’re about to read. Quite frankly, we couldn’t help ourselves.

So sit back, get yourself a nice cup of tea in that Pan-Am mug you got for Christmas back in 2009, and settle in for the Complete Guide to Commercial Aeroplanes in Movies...

WHERE DO YOU START?

Fortunately, the internet is tailor-made for this sort of exhaustive research, so we set ourselves a starting point of movies from 1970 onwards, with the aim of analysing commercial aeroplanes in films over the past 50 years. Documentaries, TV shows and anything else like that has not been included – just movies.

We discovered that since the start of 1970, there have been 528 films released that – on average, that means that a movie featuring a commercial plane has been released every 35 days for the past half a century.

OK, that’s quite a lot. But which manufacturers are the most popular? So we looked into that – here’s what we discovered… 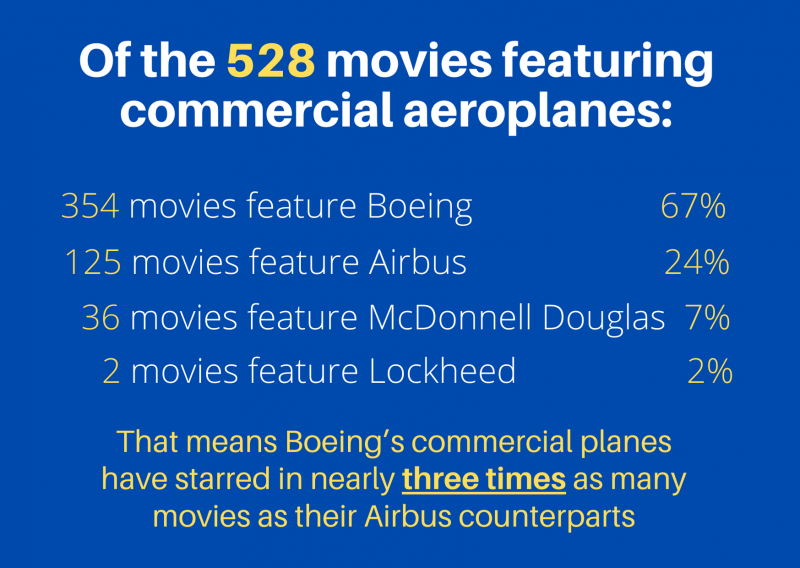 PLANES IN MOVIES, DECADE BY DECADE

As a percentage of those 528 films, commercial planes starring in movies can be broken down as follows: 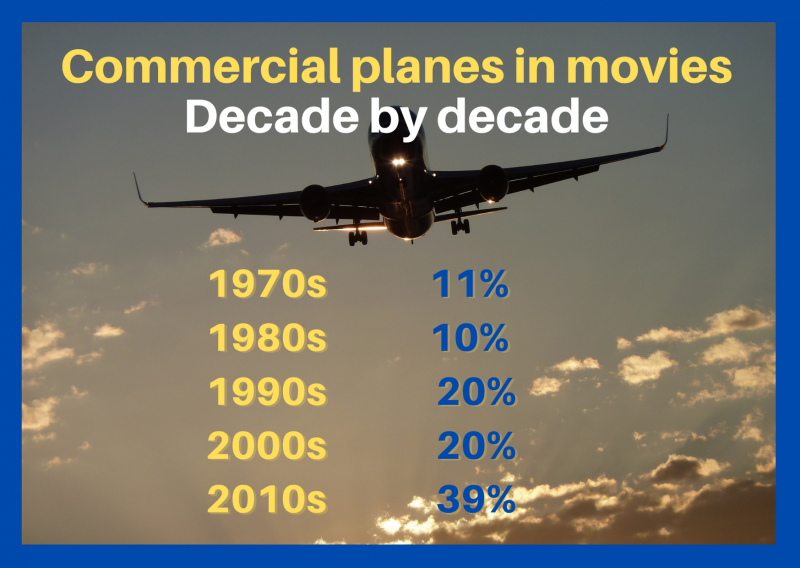 Oddly, you can see that the trend for movies to feature commercial aeroplanes has grown massively in the past 20 years. In fact, there have been nearly as many films with passenger planes in the past two decades than there were in the ’70s, ’80s and ’90s put together.

SO WHAT ARE THE MOST POPULAR COMMERCIAL PLANES IN MOVIES?

The most popular planes in movies, in order of the amount of films that they’ve been in, is as follows: 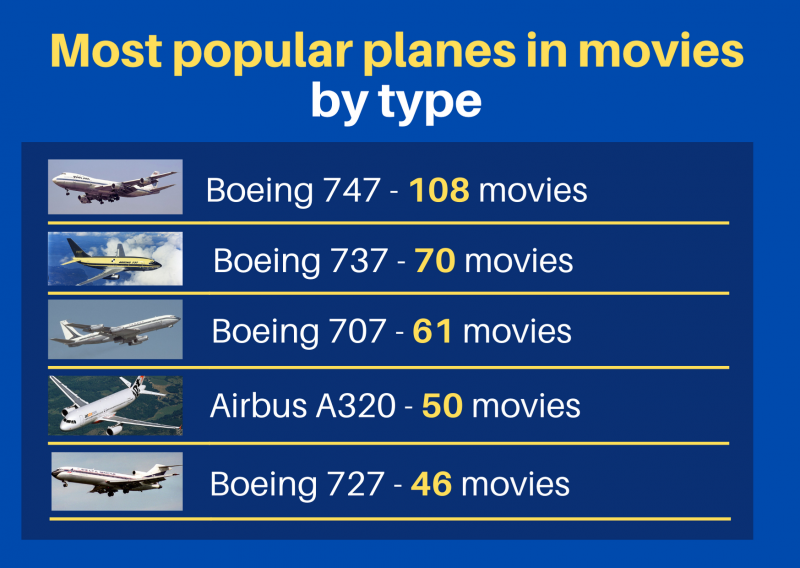 It certainly seems that way. In fact, of all the movies featuring commercial planes, the Boeing 747 has been in 20% of them. 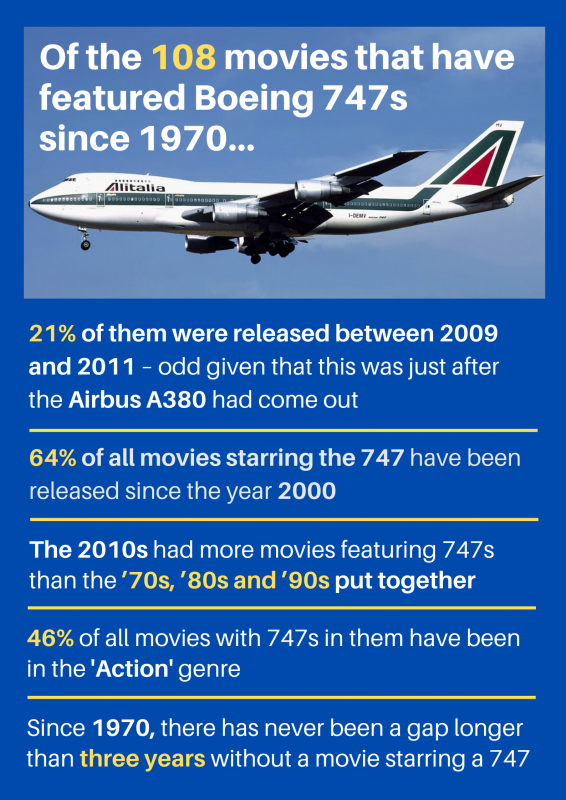 THE BOEING 737 IS POPULAR, TOO

The good old 737 has starred in 70 movies. Oddly, it featured in one in 1970, not long after its introduction, but it didn’t feature in another movie until 1989. 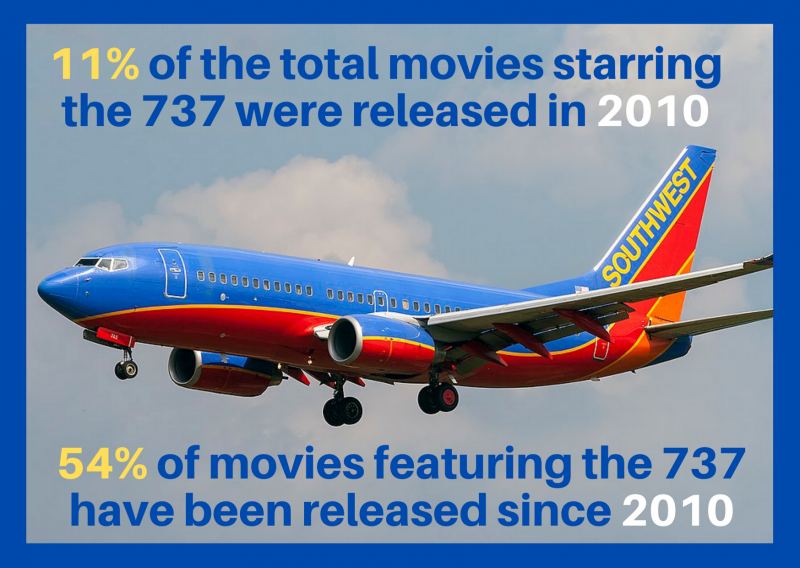 SO WHICH MOVIE GENRES ARE POPULAR FOR COMMERCIAL PLANES?

Of the 528 movies starring commercial planes, 41% of them are in the ‘Action’ genre.

But (unsurprisingly), we looked further into it to see which movie genre was most popular with each type of aircraft.

The most common genres within each aeroplane category are:

SHOW ME THE MONEY (AT THE BOX OFFICE)

By this point we were in way too deep. But that’s no reason to stop, is it? So we wondered how much box office cash these aeroplanes types had helped to make. 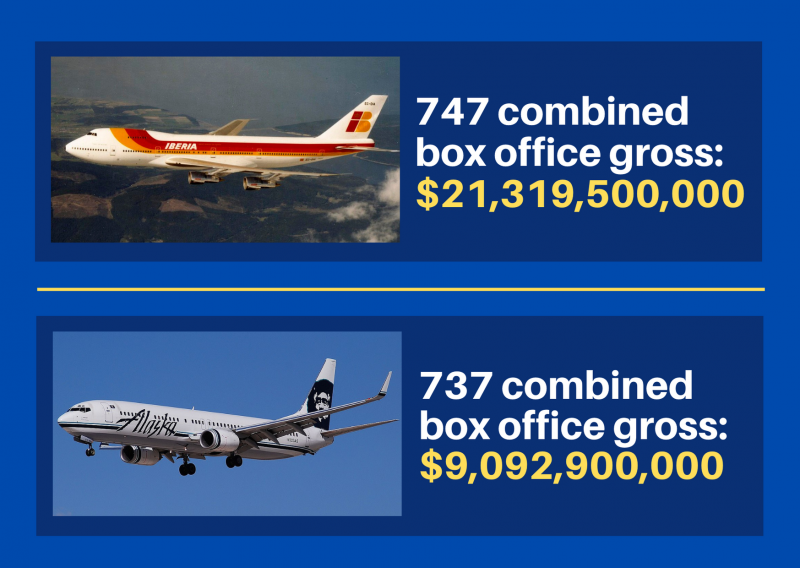 The average salary for a Boeing 747 pilot is:

That means that the box office sales made from films including the 747 could pay the salary of a long haul captain for 103,171 years and a long haul first officer’s salary for 137,562 years.

Comparatively, the average maximum salary for a Boeing 737 pilot is:

Finally, we all know Ryanair loves the Boeing 737, with it being the only type in its fleet. With the money made from the 737 films, Michael O’Leary’s salary (average of £3.1m per year) could be paid for 2,271 years.

Quite honestly, at this point, we had to go and have a lie-down…