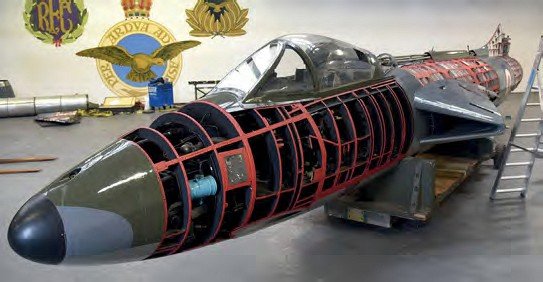 The sectioned port side of Hunter F1 WT619, shortly after arrival at Montrose from Staff ord on 28 October. Later that day it was fully assembled.
NEIL WERNINCK

Hawker Hunter F1 WT619 arrived at the Montrose Air Station Heritage Centre on 28 October following donation from the RAF Museum. The semisectioned airframe spent many years on display at the Museum of Science and Industry in Manchester, and more recently was tucked away in the RAF Museum store at Staff ord.

This Hunter is an appropriate arrival in Scotland, having been based at RAF Leuchars with No 43 Squadron during the 1950s. The machine made its maiden flight first on 29 July 1954 and is now one of the few surviving examples of the F1. Earlier this year the Montrose museum signed a memorandum of understanding with the RAFM to establish a partnership to foster the interests of both museums through collaborative programmes and other shared opportunities. Currently in the workshop at Montrose is Miles M2H Hawk Major G-ADMW/ DG590, which was donated by the RAFM in February 2017. 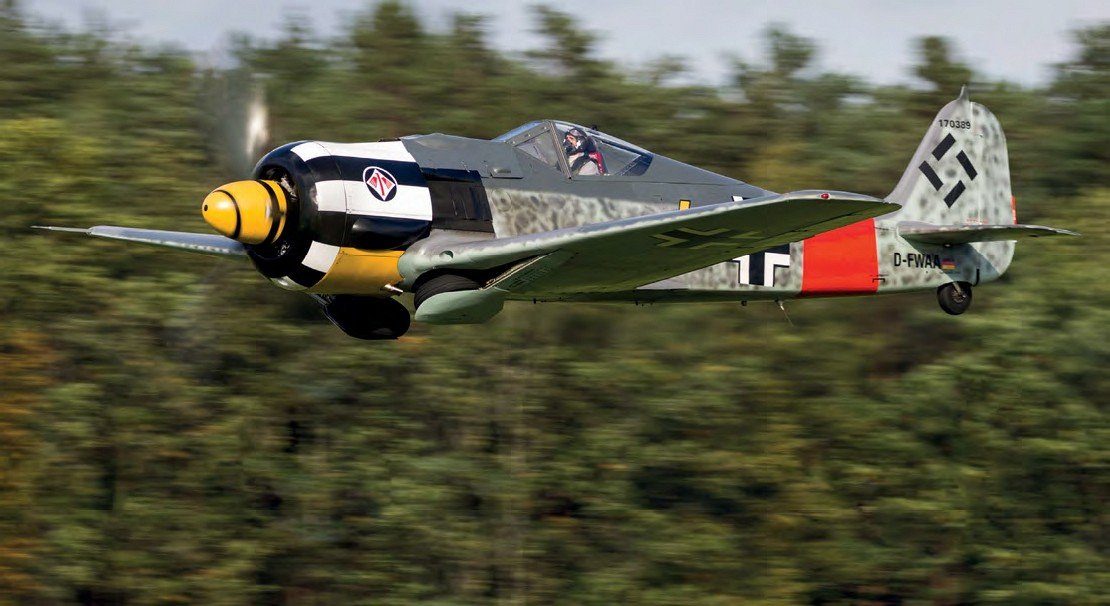 Klaus Plasa tucks the gear up quickly as Flug Werk FW 190 D-FWAA gets airborne in its new scheme at Heringsdorf on 28 September.
HUW HOPKINS

The Air Fighter Academy/Hangar 10 Collection Flug Werk FW 190, D-FWAA, made its post-rebuild display debut in the hands of Klaus Plasa at the Hangar 10 fl y-in at Heringsdorf on the Baltic Sea island of Usedom, Germany, on 28 September. The machine has been rebuilt in the MeierMotors workshop in Bremgarten, south-west Germany following its ditching offHyères, France, on 12 June 2010 after experiencing engine failure during a display with the late Marc Mathis at the controls. The fi ghter now wears the ‘Yellow 4’ markings of a Focke-Wulf Fw 190 fl own by Jagdgeschwader 1 ‘Oesau’ while based at Garz, also on Usedom, during early February 1945. More next month. 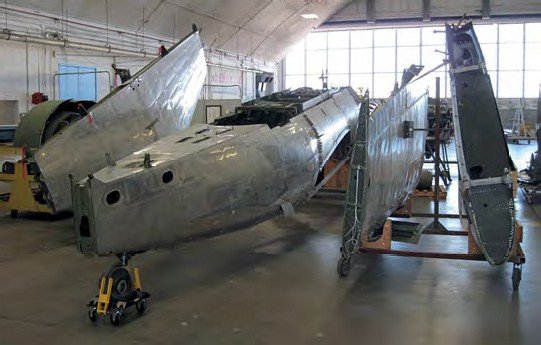 Part-restored Curtiss A-25A 42-80449 in the restoration hangar at the National Museum of the US Air Force in Dayton.
NMUSAF

The National Museum of the US Air Force’s Curtiss A-25A Shrike, 42-80449, was transferred to the National Museum of Naval Aviation at Pensacola, Florida, during October after it was judged to be surplus to collection needs. The Shrike — the Army Air Forces’ nonfolding wings version of the SB2C Helldiver — will be used to progress the restoration of Pensacola’s SB2C-4, BuNo 19866, which was recovered from Lower Otay Reservoir near San Diego in August 2010. The A-25A was salvaged offSand Point, Lake Washington during 1986. Following restoration work by Mike Rawson at Anoka County Airport, Minneapolis using the outer wings and tail from a Helldiver recovered from a mountain crash site in Utah during 1999, it was roaded to the restoration hangars at Dayton, Ohio in 2008 for completion as an A-25.