The new January/February issue of PC Pilot has finally touched down, and as always it is loaded with exciting reviews, features and tutorials. 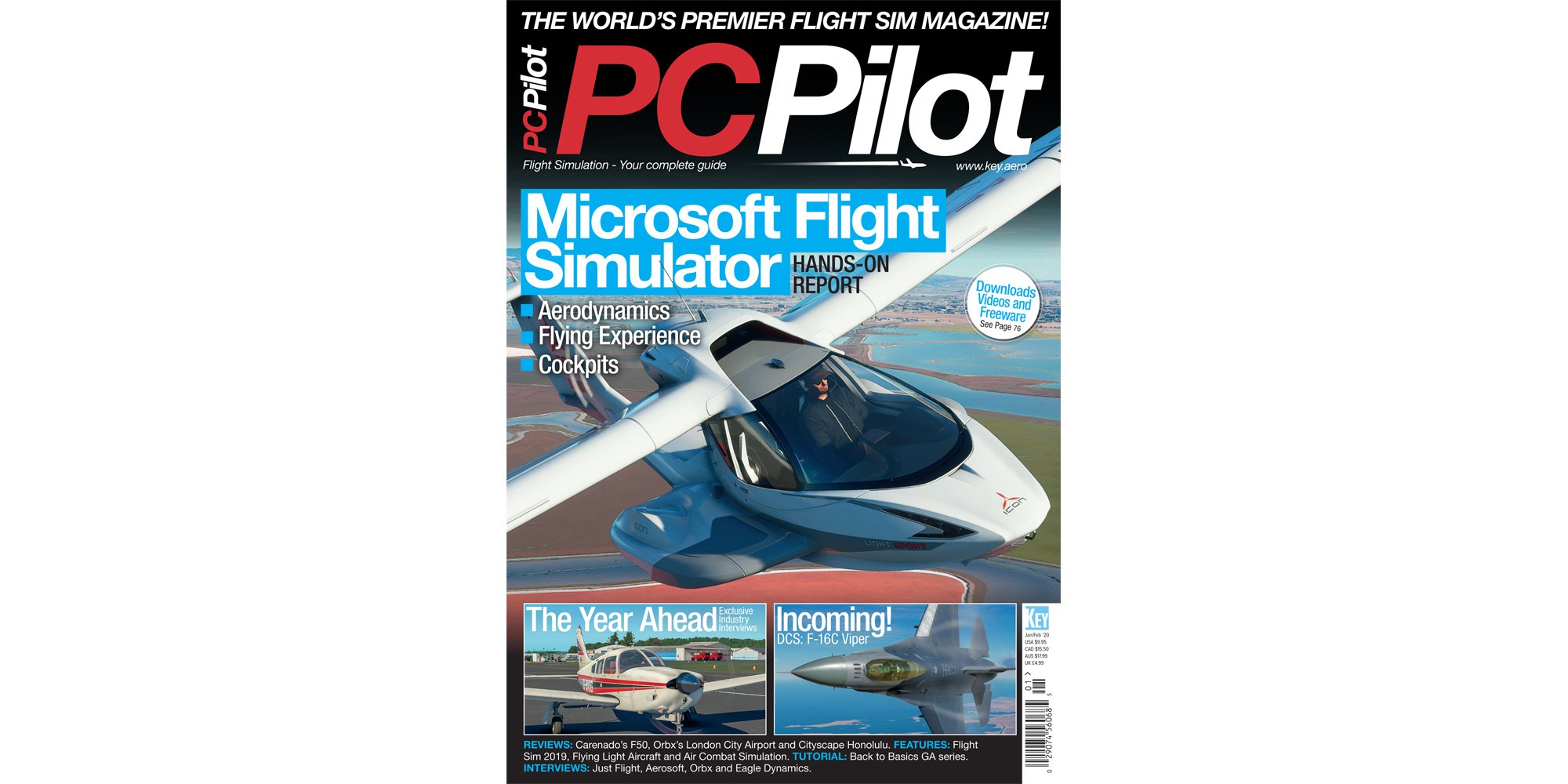 Prolific aircraft developer Carenado continues to update and rebuild its fleet for X-Plane 11 and here we check out another of one of its recent releases, the Fokker F50 twin turboprop airliner…

London City Airport's main passenger traffic comes from the financial sectors, as it is more convenient than the other outlying airports. More recently, however, airlines operating out of EGLC have added more leisure destinations to their schedules, including Majorca, Malaga and Chambery, so catering for a wider passenger base. Cityscape Honolulu is a mini-region by Orbx, offering a detailed and comprehensive look at this city. If you’ve not seen a Cityscape before, it’s simply Orbx’s method of focussing its modelling talents to create an environment that’s even better than either its global or regional products. In mid-2018 eyebrows were raised with the news that Eagle Dynamics was considering development of an F-16. As far back as 2008 the idea was at least being considered but the 2018 news soon grew teeth as concrete signs developed that pointed towards actual work on the module. Fast forward to early October 2019 and the Early Access F-16C Viper was finally allowed to see the light of day. So let’s take a look at what we have at this stage.

We caught up with Martyn Northall from Just Flight to get the latest gen on four classic airliners currently in development: the 747 Classic, BAe 146 Professional, Fokker F28 Fellowship and the Airbus A300B4.

Scott Phillips, Just Flight’s marketing manager, provides an insight into what the last 12 months have been like for the company and how he sees the future of this ever-changing industry.

Aerosoft – The year ahead

As part of our special feature on the current state of flight simulation, we invited Aerosoft’s CEO, Winfried Diekmann, to give us his thoughts from his unique perspective.

Orbx Simulation Systems – The past year and the road ahead

Orbx’s CEO, John Venema, discusses the current state of the flight simulation industry, the past year from Orbx’s perspective and his plans for the coming year. 2019 has been a busy year for Eagle Dynamics, which saw the release of many new products and innovative features for DCS World. Executive producer, Matt Wagner, talks about the company’s activities over the past 12 months and their plans for the future. In our previous issue, we took a look at the world of light aircraft and discussed why it is such an important place to start your flight simulation journey. This edition, we examine some of the great aircraft, scenery and utilities available to enhance your experience. Now in its seventh year, the annual Flight Sim show returned to the RAF Museum in Cosford, but for the first time, as a two-day event over the weekend of October 5 and 6. Thomas Haynes has filed his report. In part two of the Global Launch Preview event in Seattle, Thomas Haynes covers how the new simulator handles the cockpit elements and talks in detail about his hands-on experience with the simulation.

For this issue, we travel to La Mole in the south of France. Just inland from the sun-drenched shores of Saint-Tropez, it is the point of entry for the rich and famous - with stunning beaches, world-class dining and a mild Mediterranean climate. Baron’s Combat Corner – To fly and to fight!
In this first instalment of a new series of articles, Derek Davis examines aerial combat tactics and the essential requirements needed to survive and ultimately succeed in a dogfight.

Having explored basic navigation and the effects of wind, it’s time to start a longer flight that will incorporate real-world techniques to navigate in Flight Simulator. V-Speeds – Flying by the numbers

Knowing your V-speeds is crucial for operating an aircraft within its optimum performance envelope and structural limits. In this hints and tips guide, we provide an overview and explanation of important V-speeds used in general aviation.