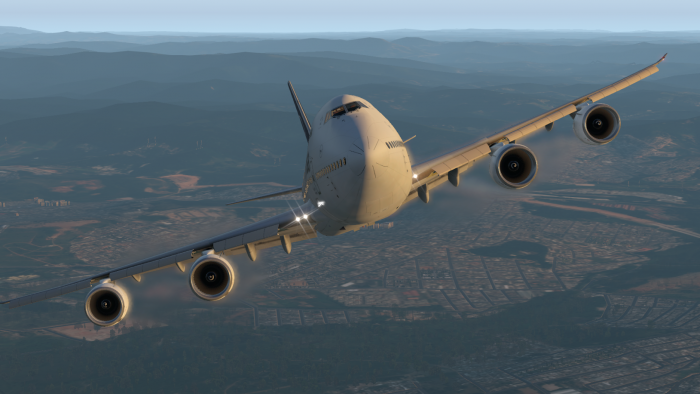 Supercritical Simulations Group (SSG) has released the long-awaited follow-on to the 747-8 Series for X-Plane 11.

The new version has been completely reworked with a updated 3D external model and flight deck with improved systems and displays. It also features a new tablet-based menu system and a sound set from Turbine Sound Studios. The Intercontinental passenger version is released first, and the freighter variant will come later as a free upgrade.

The external 3D model has been redone, including an all-new fuselage closely modelled on the real aircraft. The textures for the entire aircraft have been redone down to most external placards. A number of animations have been added along with operational doors, satellite antennas, a tail camera, transparent passenger windows and improved wing flex.

Up front, the 3D cockpit has been reworked and retextured with a new overhead, main panel and centre pedestal and cockpit seats. Almost all switches are functional along with a realistic IRS alignment, an accurate fuel system with different pumps, tanks and fuel tank logic.

It comes with realistic AUTOSTART and RUNNING indicators on the secondary engine displays, improved air conditioning system logic and better track representation on the nav displays. Other highlights include a realistic clock and chronometer, barometer pressure logic and independent captain and first officer CDUs (Control Display Units). Several FMC improvements have also been added such as a FIX page, Route 2 option and a diversion function.