Zuch on show at Krakow

At the Polish Aviation Museum in Kraków, an example of the indigenous LWD Zuch 2 trainer recently went on display in the main building following a full restoration. The machine, SP-BAM, was the second production example and has been in the museum’s collection since retirement in the mid-1960s.

The prototype of this tandem trainer was built in 1948, powered by a Czechoslovakian 160hpWalter Minor six-cylinder in-line engine. A supply of engines could not be guaranteed for production aircraft, so the design was modified to use a second-hand ex-Luftwaffe Siemens-Halske Sh 14A radial, of which plentiful supplies were available in post-war Poland. Five series production examples of the radial-engined Zuch 2 were built by LWD in Łódz´ in 1950, and were used by Polish aero clubs into the 1960s. However, they suffered both from the increased drag of the radial engine over the original in-line design, and an inability of the worn second-hand powerplants to meet their rated output of 160hp, only about 75 per cent of that figure being achieved in service.

In the First World War display hangar at Kraków, the LFG Roland D.VIb fuselage — another sole survivor — now has a set of wings which were manufactured in New Zealand, but these are unable to be fitted at present due to the space constraints of the new exhibition layout, opened in 2014. Mike Shreeve 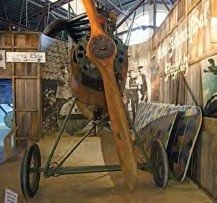 The fuselage of the Roland D.VIb, 350 of which were built during 1918. The recently delivered reproduction wings sit alongside.
MIKE SHREEVE