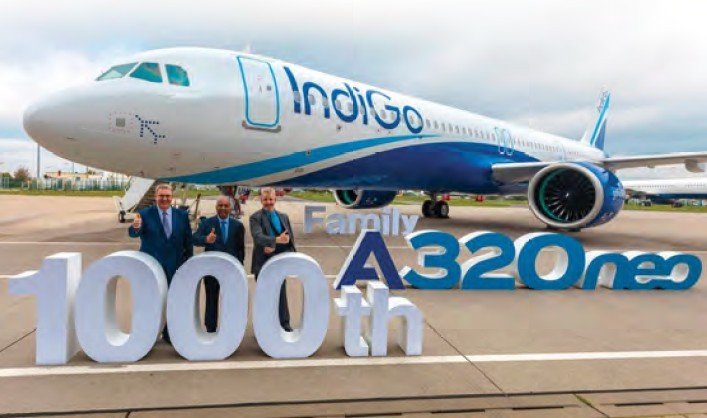 AIRBUS HAS celebrated the delivery of the 1,000th airframe of its A320neo Family. The aircraft, VT-IUH (c/n 8968), was produced at the firm’s Hamburg facility before being delivered to Indian low-cost airline IndiGo at their Delhi/ Indira Gandhi base. Equipped with two Pratt & Whitney PW1000G engines, the type was designed with fuel efficiency in mind, offering an overall 20% reduction in fuel burn compared to previous generations.

IndiGo holds the title of the world’s biggest A320 Family customer with orders totalling 430 aircraft. Since the airline’s first Neo was delivered in March 2016, its fleet of the new type has grown to 96, alongside 129 A320ceos. The airline operates a young fleet of 245 jets which collectively have an average age of just 5.7 years.

Alongside its reduced fuel burn, the type boasts a 50% noise reduction, as well as seating for up to 240 passengers. At the end of September 2019, the A320neo Family had received more than 6,660 firm orders from close to 110 customers worldwide. (Photo Airbus)