Canadian ‘Stringbag’ for the UK 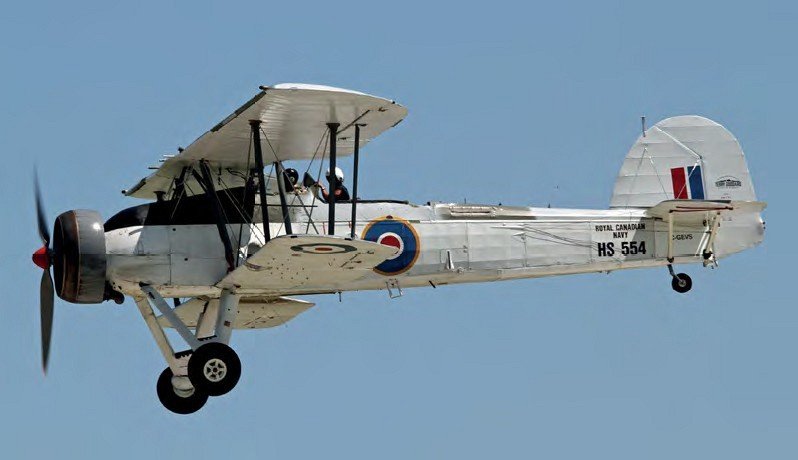 Pictured at Oshkosh in July 2011, on one of its last flying appearances to date, Swordfish HS554 wil soon be in the UK.
PETER R. MARCH

The Vintage Wings of Canada Fairey Swordfish II, HS554, has been acquired by a so far undisclosed British owner, and will soon be crated up at Gatineau-Ottawa Executive Airport, Québec, for the move to the UK. The machine originally went into service with the Royal Canadian Navy as a trainer in September 1943, and was struck off charge in August 1946.

It will be the first privately owned Swordfish to go onto the British register since Sir ‘Willie’ Roberts imported W5856/ G-BMGC for his Strathallan Collection in August 1977. That Blackburn-built machine is now with the Navy Wings collection at Yeovilton.

Both aircraft were saved from scrapping post-war by Ernest K. Simmons, who acquired 12 examples and kept them in open storage on his farm in Tillsonburg, Ontario. Following his death, the aircraft were auctioned off — along with a large number of North American NA-64 Yales — in September 1970. HS554 was acquired by Robert Spence, who restored it at his base in Muirkirk, Ontario, the torpedo bomber flying again in August 1992. It was bought by Mike Potter for his Vintage Wings of Canada collection in August 2006, and moved to its new home by road while the Pegasus engine was rebuilt in the UK. It fiew again at Gatineau on 31 October 2006, but has been grounded for the past few years.