Britain’s east coast has a proud history of summertime seaside airshows, which are aimed squarely at the family market and frequently see six-figure crowds. Who could resist the attraction of a walk along the promenade, offspring in one hand and a choc-ice in the other, while watching the Red Arrows perform over the deep blue of the sea?

The one problem is that such shows are, by their very nature, free to view, their economic justification being that they bring in the crowds to spend money in the resort’s shops, restaurants, bars, hotels and other tourist attractions. Such benefits are, though, extremely difficult to quantify. Lowestoft’s Seafront Air Festival was successfully staged over 15 seasons, but ended in 2012. Southend, the granddaddy of all seafront displays, similarly decided ‘enough is enough’ after its 2012 event, with everincreasing costs playing a huge part in both shows’ demise. All of which left the Clacton Airshow as the last of its kind on the east coast.

This year’s Clacton show was on Thursday 24-Friday 25 August, with flying taking place along the seafront between the pier and Martello Beach. Both days enjoyed good weather. On the Thursday, there were two displays — the usual afternoon show at 14.00 and a shorter, twilight one at 20.00. Orangejacketed ‘ground crew’ patrolled the promenade throughout the day offering programmes at £5 and rattling collecting buckets for donations, but let nothing detract from the fact that this show was for free. The end of the afternoon’s flying was followed by a three-hour break — good for trade in Clacton, with the commentator imploring visitors to go and eat, drink and spend money in the town — before the start of the evening display.

By 20.00, the light was dropping fast. ‘Lights and pyrotechnics’ were promised for the evening slot, and lights and pyrotechnics were exactly what we got. Taking off from nearby Clacton airfield, the two Silence Twisters of the Twister Aerobatic Team and the Fireflies’ pair of Vans RV-4s approached to make a first pass as a four-ship, before each team went into its own routine. Coloured LED lights on the fuselage, smoke and strategically placed fireworks dramatically marked the aircraft’s progress across the sky. The closing item was Otto the Helicopter, that great US act involving a Schweizer 300C, now imported to these shores by Brendan O’Brien. His aircraft had been fitted with a heavy external heavy load of fireworks; seven hours, it was said, were needed to rig the Schweizer for its sevenminute slot. By this stage, darkness had fallen, and as O’Brien manoeuvred energetically and loosed off his pyrotechnics the helicopter itself was difficult to discern against the dark sky and the dazzling, exploding light show.

“The twilight routines truly assaulted the senses. The UK air display scene has long needed something radically different. This is it”

There may have been just three items on the evening’s programme, but these twilight routines were dramatic and truly assaulted the senses. It took a while for this type of show, long a feature of North American events, to develop in Britain. After Belgium’s Sanicole Airshow pioneered night displays in Europe, the Bournemouth Air Festival’s ‘Night Air’ did likewise over here from 2010, since when this part of the scene has gone from strength to strength. Many of the seafront shows whose flying programmes are run by TSA Consulting — Clacton being one — now feature a twilight element to great effect, and several performers have made night displays a speciality. The UK air display scene has long needed something radically different. This is it. 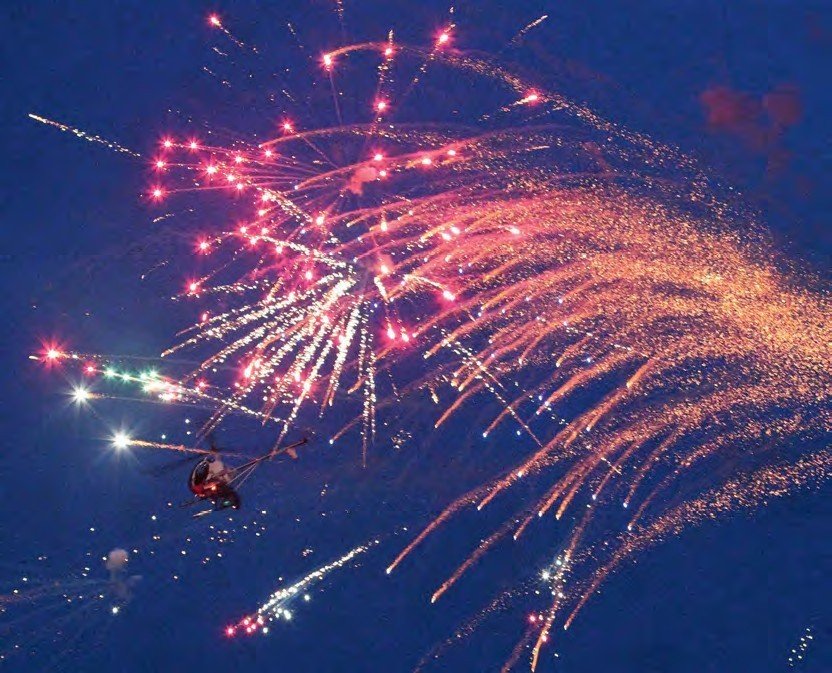