The second flying course for the NATO Tactical Leadership Program took place at Albacete Air Base between May 27 and June 14. Roberto Yáñez and Alex Rodríguez uncover the latest developments The two Eurofighter-equipped Ejército del Aire fighter wings, Ala 11 from Moron and the Albaceteresident Ala 14, participated in course 19-2.
All images by Roberto Yáñez unless noted

The progressive entry into service of fifth-generation fighters in Europe is leading change full of challenges. The inherent difficulty of introducing a brand-new and complex weapons system such as the Lockheed Martin F-35 Lightning II has forced those nations operating the type to date to undertake a profound redesign of the tactics and doctrine needed to employ their new machines.

NATO’s Tactical Leadership Program plays and will continue to play an important role, since it will serve as a testbed for the integration of the dark, sophisticated fifthgeneration aircraft in traditional combat packages, which up until now have comprised fourth-generation jets.

With certainty of participation by Lockheed Martin’s dark jets in the near future, in recent years, TLP component nations have undertaken work to prepare themselves for the challenges presented by fifth-generation jets like the F-22 Raptor, but especially the multinational F-35 Lightning II.

According to Colonel Andrés Maldonado, TLP Commandant: “Conducting TLP at Amendola Air Base in 2018 was an opportunity to have a first contact with the F-35, in this case they were Italian. We learnt that these aircraft provide some exceptional capabilities to Combined Air Operations [COMAOs], and complement and improve it in an impressive way. We consider it very important that these aircraft take part in the courses held at Albacete, home of the TLP.”

With much work to do, Col Maldonado affirms that work is underway on five strategic areas of improvement to adapt the TLP to the necessities of training with fourth and fifth-generation aircraft. These include adapting the current infrastructure available at Albacete Air Base. This will see improvements made to the parking ramps, installation of a fibre optic network, changes to security procedures, expansion of the air space currently used for missions, adding Contested Degraded Operations training, improving radar and communications jamming, providing a GPS degradation capability, increasing and improving anti-aircraft defences and units participating as Red Air, development of a NATO tactical doctrine for operating fifthgeneration aircraft, and lastly the possible implementation of a new TLP 2.0 syllabus. 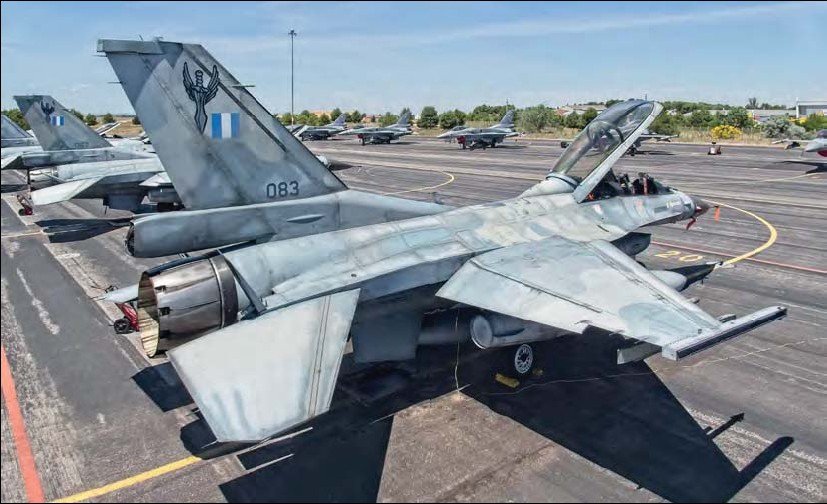 The Elliniki Polemiki Aeroporia (Hellenic Air Force) is a regular participant in TLP courses. Course 19-2, included participation by Block 50 F-16-equipped 341 and 347 Mira based at Nea Anchialos. 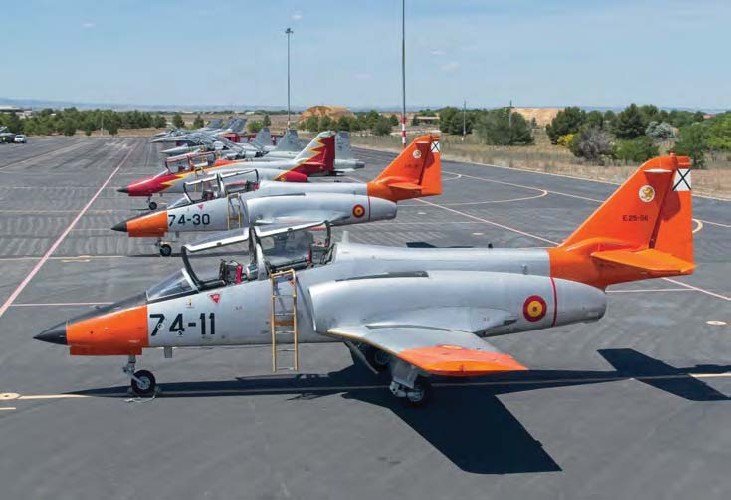 “Approximately one year ago,” said Col Maldonado, “we determined the learning process went up rapidly during the first three weeks of the course, but during the fourth week the learning curve flattened out, and did not go up like the weeks before. At the same time, some countries highlighted the difficulty of deploying aircraft to TLP for a whole month during which time they were only flying one mission a day. This issue is possibly the reason why some courses were cancelled due to a lack of participants.”

During the meeting of the TLP Steering Group last summer, agreement was reached to design a course that was one week shorter, with the flying phase concentrated in the last two weeks, and incorporation of synthetic tools to plan and execute the first three missions of the course. 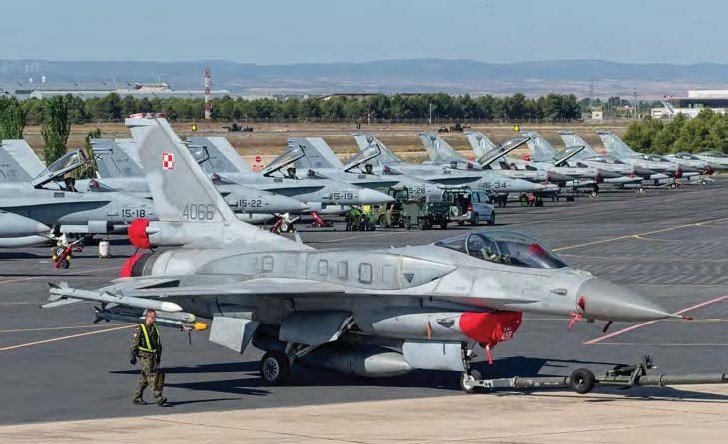 Poland could soon become the eleventh member country in the NATO Tactical Leadership Programme, based on information announced during TLP 19-2. 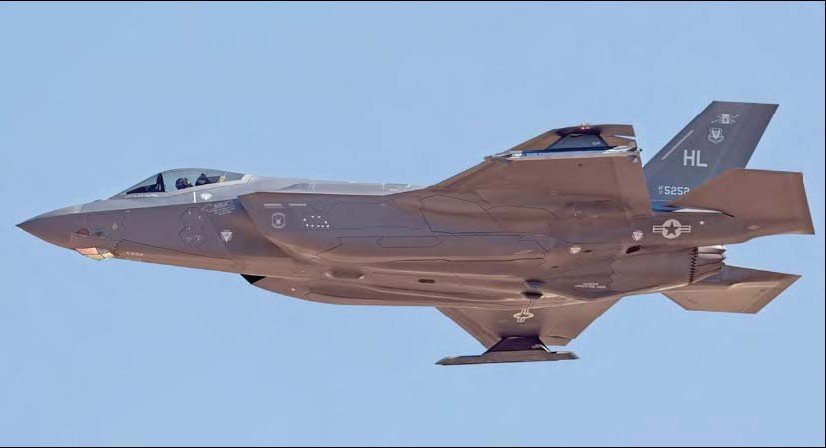 TLP’s current priority is to integrate fourth- and fifth-generation aircraft to meet the training requirements of their pilots. US Air Force F-35A Lightning IIs participated in one of the 12 missions of TLP course 19-2.

Before flying course 2018-4 took place at Amendola, based on guidance given by the Steering Group, the TLP staff undertook a series of meetings and planned a new syllabus titled TLP 2.0. The first week is dedicated to academics, planning and execution of three synthetic missions, and the first three flying missions on the Wednesday, Thursday and Friday, while the second and third weeks are dedicated to flying nine missions.

Results from two TLP 2.0 courses staged this year found they had been found generally positive by the nations involved. Col Maldonado explained how the course has gone from 15 to 12 missions of which three are synthetic. He said: “Aircraft spend less time deployed to Albacete, about half the time compared to the previous course format, and the training received is all but the same. Notably, mission content has also been adjusted and upgraded for the nine most complex scenarios which includes one now dedicated to Anti-Access Area Denial.”

Flying course 19-2 made history; it was the first to include participation by the F-35 Lightning II. Two US Air Force F-35As assigned to the 421st Expeditionary Fighter Squadron landed at Albacete on June 10 from Aviano Air Base, Italy where 12 of the stealth fighters arrived on May 23 as the latest Theater Security Package (TSP) deployment to the European Command theatre. The United States deploys TSPs to the European and Pacific Command theatres each year as rotational forces to demonstrate US support to its allies and reinforcement to the theatre involved.

The two 421st EFS jets had just completed Exercise Astral Knight 2019, a multinational air-and-missile defence event during which they operated from Aviano.

At TLP, the jets participated in one of the two combat SAR/personnel recovery missions in course 19-2.

F-35A pilot Major James said: “This type of missions and the relationships created between the pilots of the different nations involved helps create the conditions necessary to complete whatever missions we have to face in the future.”

The mission was planned on June 8 for a scenario that simulated the rescue of a downed aircrew in enemy territory.

Both of F-35As, home-based at Hill Air Force Base, Utah, flew to Spangdahlem Air Base, Germany after participating in a single TLP mission on June 11.
Tactical Leadership Programme 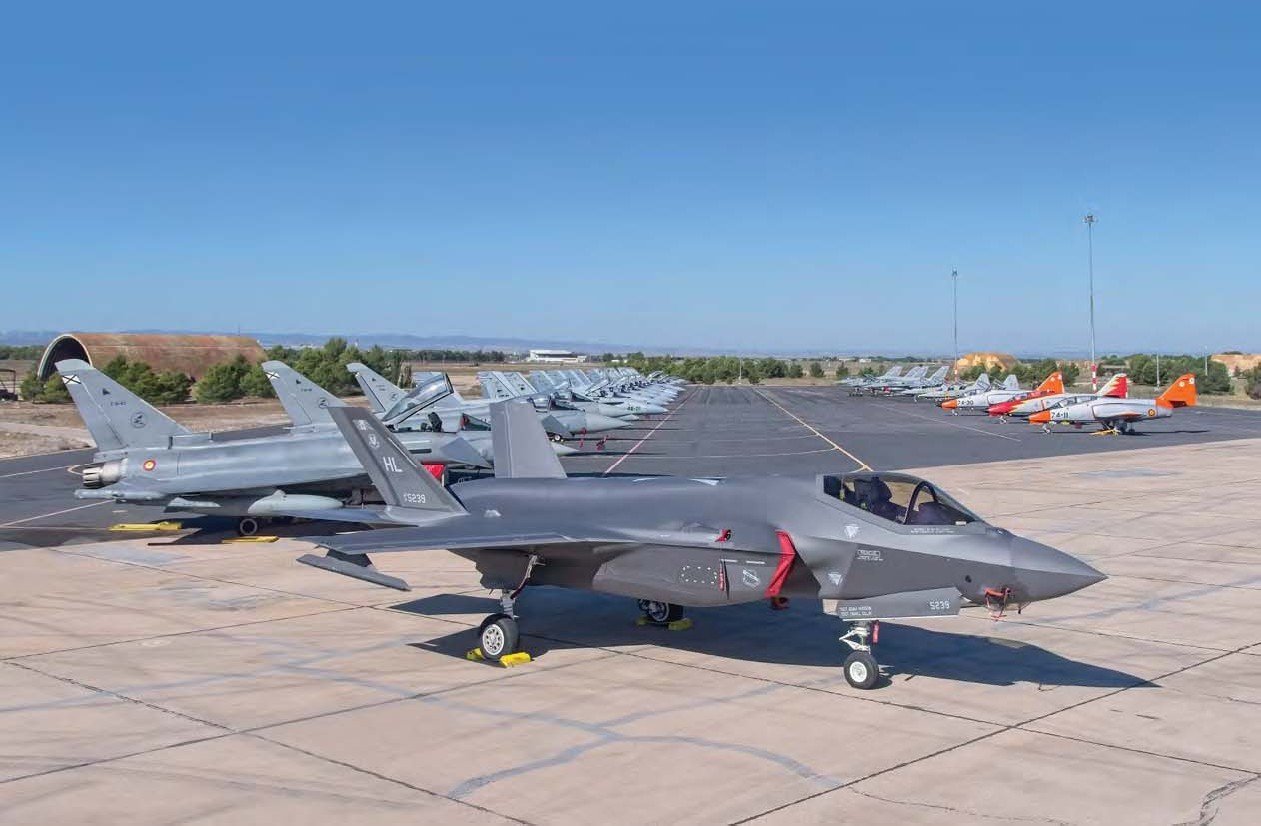 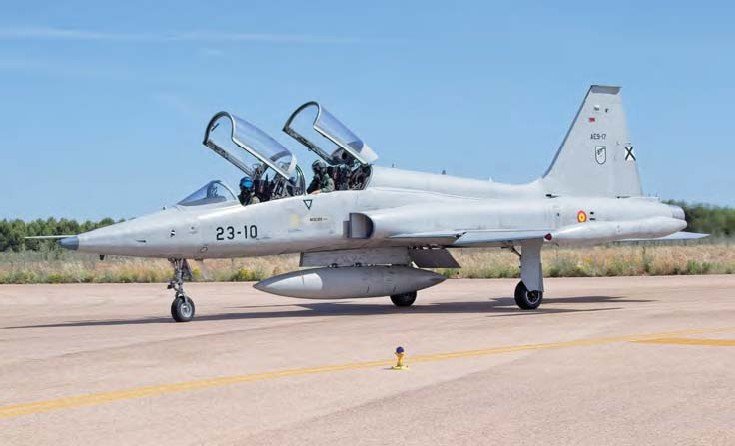 Two crews from Ala 23 based at Talavera qualified in opposing force operations and flew daily missions with their veteran, yet capable modernized F-5Ms. 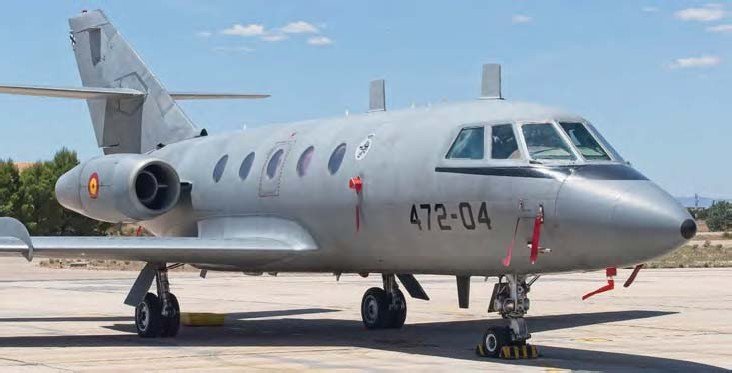 Lt Col César Lardíes, Commander of the TLP Support Unit said: “This type of mission is very complex, demanding and requires specific training and strict coordination between the forces involved. For the first time, F-35s formed a very important part of the rescue package providing capabilities and possibilities that were previously nonexistent, so this is a good opportunity to begin integrating them into COMAOs.”

Lt Col Lardíes underlined that the low observability capability of the F-35 is not applicable to TLP missions since first and foremost the safety of operations overrides everything else.

Major James said: “The F-35’s sensors and systems [especially the low observable coatings’ system] means the aircraft might be detected much latter [in engagements] than fourth-generation aircraft during real combat, and at the same time the aircraft is capable of detecting threats much sooner.”

Threat detection is of course why the F-35 is of great tactical value in a COMAO.

Six of the ten countries signed up to the TLP programme already have, or will soon have, the F-35 in service, so TLP staff are leading its integration. Despite participation in just one TLP mission, work is underway to enable the first F-35 pilots to graduate from a flying course in 2020.

Remember mention of the new fibre optic network being installed at Albacete? Well, the network enables F-35s to communicate directly with the United States, allowing supervision to be performed from America. Fibre optic network installation is ongoing, and will be complete by 2021, by which time the base at Albacete will be able to support deployments of up to 12 F-35s from any nation.

After taking part in the June 11 TLP mission, F-35As 17-5239/HL and 17-5252/HL departed Albacete for Spangdahlem Air Base, Germany to continue the TSP deployment with a series of planned operations. 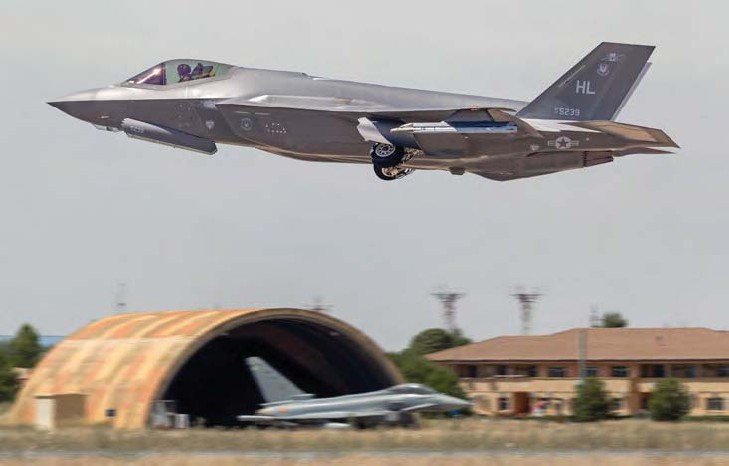 F-35A 17-5239/HL takes off from Albacete’s runway 27 for a combat search and rescue mission. By 2020, participation of fifth-generation F-35s in combined air operations will be common during TLP courses.

This year’s second course, dubbed 19-2, included aircraft from host nation Spain and fellow European nations Greece and Poland, the latter as an invited nation. The TLP recently sent a formal invitation to have Poland officially join the programme as the 11th member nation.

The three nations listed above committed 26 aircraft to the course, all participating in the friendly Blue Air force. Twelve additional aircraft from Greece, Poland and Spain formed the adversary Red Air force, which resulted in nine pilots graduating as opposing force participants.

Course stats include 229 sorties flown for a total of 391 flight hours with 16 pilots, six ground control intercept controllers and two intelligence analysts graduating the course. The numbers are somewhat lower than in the past, which reduces the costs for participating countries. AI