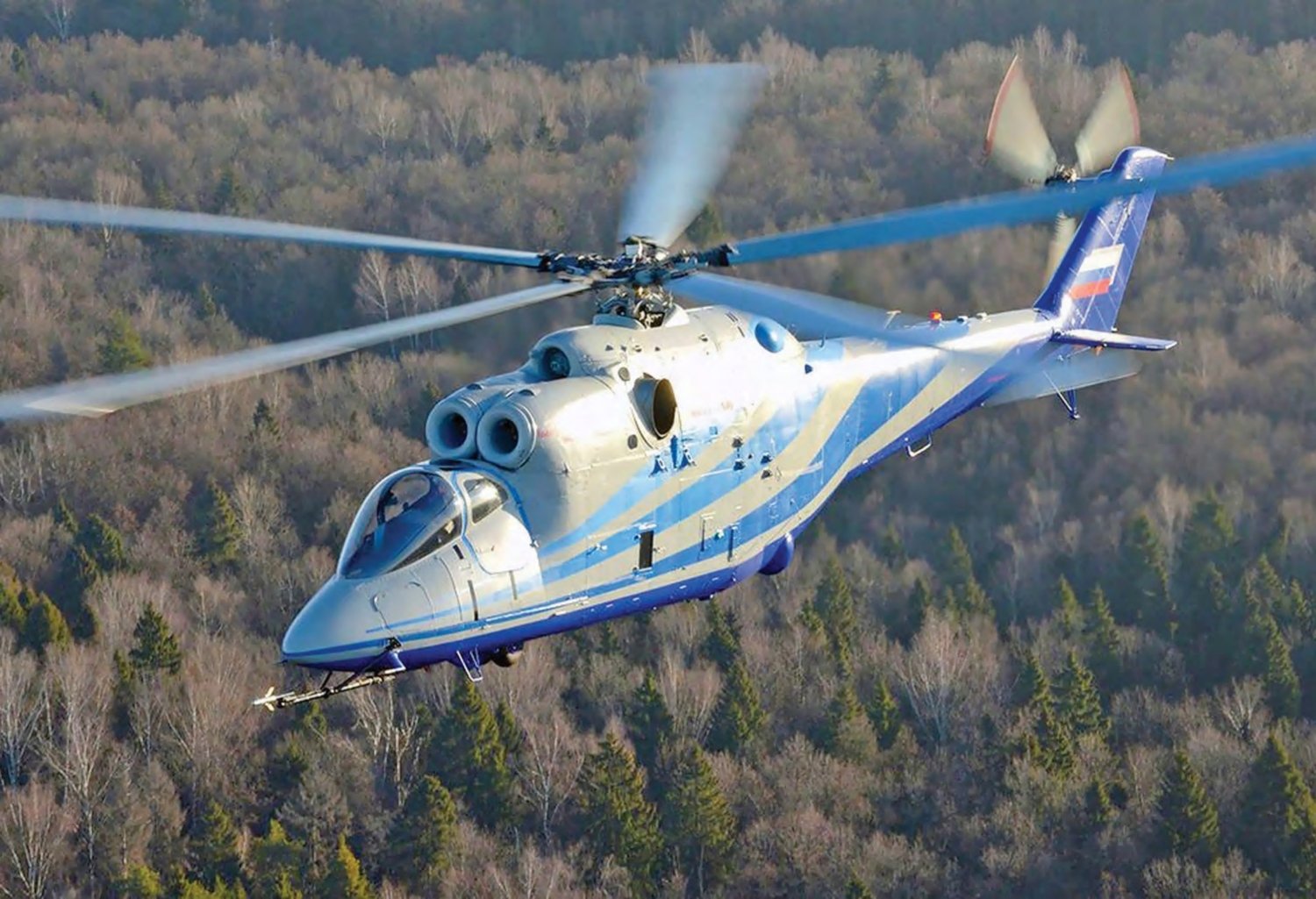 This striking news was revealed on October 29, 2016 by a Russian Ministry of Defence (MoD) official, Colonel Evgeniy Poluyanov, the head of the 220th branch of the Russian MoD, which is tasked with overseeing defence-related research and development (R&D) work undertaken by Mil Moscow Helicopter Plant (Mil MHP), a company within the Russian Helicopters holding group.

The principal cutting-edge technology featured on the LL PSV, according to Col Poluyanov, is the composite mainrotor blades. He also noted that the speed achieved by the flying laboratory is regarded as useful for a range of operational purposes.

Maiden flight of the LL PSV took place on December 29, 2015 at Mil MHP’s flight test centre in Tomilino near Moscow. At the time, it was announced its main purpose was to test a raft of new technologies that were originally developed in the Russian Advanced Commercial Helicopter project, known by its Russian-language abbreviation as PSV (Perspektivnoy Skorostnoy Vertolet) and dubbed RACHEL for the western public.

The LL PSV’s flight test programme is primarily aimed at evaluating the vibration and noise levels in high-speed flight. The all-new main-rotor blades, tested for the first time on the LL PSV, feature a high-lift aerofoil and a new tip shape similar to the design of the British Experimental Rotor Programme, with highly swept tip. The new blade is intended to provide considerably higher lift while dealing with the transonic effects on the advancing side, and high- Alpha stall on the retreating side.

The Mi-24 attack helicopter was selected for use as a high-speed flight research testbed because its low-drag sleek fuselage is considered most suitable for this kind of experimental flying. The shape of the LL PSV fuselage was further refined to reduce high-speed drag as much as possible. 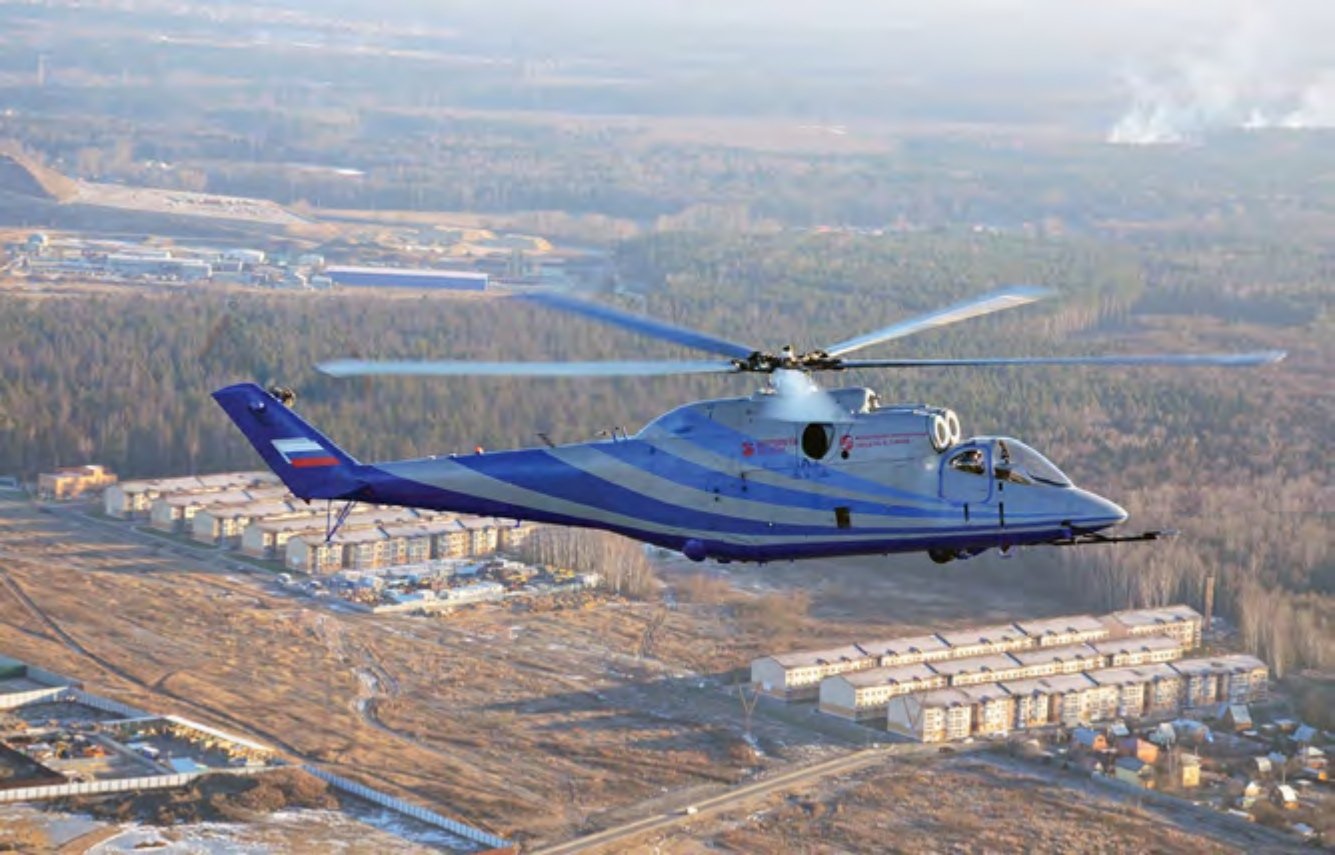 There is an all-new nose section for a single pilot. The helicopter was shown in public for the first time in August 2015. At that time, it also had clean stub wings for generating lift in high-speed flight, which contribute up to 20% of the total lift generated by the combination of the rotor system and stub wings. The first photos of LL PSV in flight from December 2015 showed the stub wings had been removed together with the PZU engine dust filters. In 2016 the flying laboratory also received new-design exhaust ducts designed to reduce drag.

The LL PSV was originally developed to test design solutions for Russia’s ambitious PSV/RACHEL development initiative for a new-generation rotorcraft. Funded by the Russian Ministry of Industry and Commerce, the original programme was formally given the go-ahead in 2013, with the allocated development budget for its first two phases amounting to RUB7.5 billion, equating to about $230 million at that time.

The RSV/RACHEL programme, also dubbed V-37 by Mil MHP, has been described by Russian Helicopters since mid-2012 as an ambitious and focused effort to field a successor to the Mi-8/Mi-17 transport helicopter, still the best-selling product of the Russian rotorcraft industry.

As Russian Helicopters’ Chief Executive Officer Alexander Mikheev noted during a speech at Heli-Expo 2014 in Anaheim, California, the most important factor for the potential customers that were interviewed during the concept design was the economics of operations (i.e. the cost of ownership and the direct operating costs). According to Russian Helicopters, the targets were for the PSV/RACHEL to have operating costs some 20%–25% lower than that of the Mi-8/Mi-17 family. In May 2014, Mikheev said that the PSV/RACHEL’s certification trials were slated to commence in 2020.

A competition was held in 2011 and 2012 between the Mil and Kamov design bureaus, with the former’s design concept declared the winner. The PSV/RACHEL programme was co-funded at the time by Russia’s state budget and Russian Helicopters, with co-funding also provided by Russian Helicopters. There were also two risk-sharing partners in the R&D effort. Klimov was responsible for the engine, while the electronics specialist KRET got the avionics suite development.

According to the programme schedule revealed in 2013, the first flight of the new V-37 helicopter has been tentatively slated for 2018. As announced by Russia’s then-Deputy Minister of Industry and Trade, Yuri Slusar, that schedule called for the completion of the development work and launching the new-generation commercial rotorcraft into production by 2020.

The PSV/RACHEL was planned to have two crew, a seating capacity of 21–24 passengers (the same as the Mi-8/Mi-17) and employ the traditional rotorcraft design scheme with a conventional pod and boom design, a five-blade main rotor and a four-blade tail rotor. Thanks to the use of new-generation composite blades, a lowdrag rotor hub design and a streamlined fuselage (needed for low drag in cruise flight), combined with more fuel-efficient engines, it was expected to have a longer range than the Mi-8/Mi-17. The maximum design speed was set for a range between 194 and 205kts (360 to 380km/h) and the cruise speed between 162 and 189kts (300 to 350km/h). 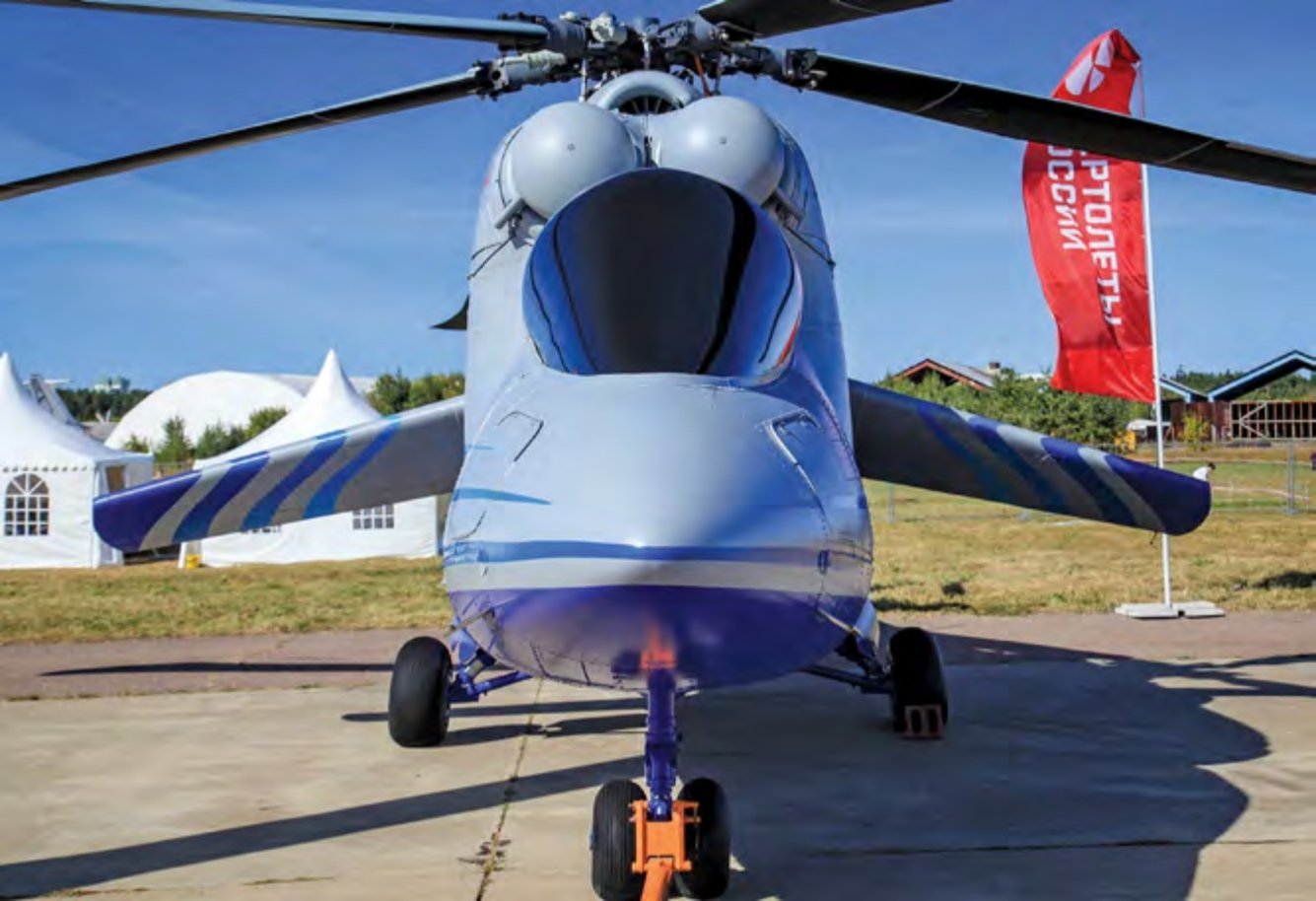 A new nose section was added to the LL PSV design to reduce drag as much as possible. At the MAKS air show in August 2015, the LL PSV was demonstrated with a non-transparent temporary canopy and fitted with stub-wings. The wings were removed during the flight-test programme.
All images Alexander Mladenov

The over-optimistic sales forecast for PSV/ RACHEL made by Russian Helicopters in 2012 called for up to 726 examples to be produced between 2020 and 2036, with 294 of these expected to be taken by domestic operators and the rest purchased by export customers.

However, this is far from any realistic long-term market estimate and may just have been based on the highly unlikely possibility of replacing a significant proportion of commercially and government-operated Mi-8/Mi-17s worldwide. It is noteworthy that today’s economic and political realities in Russia are very different from those in the early 2010s. In addition all major domestic rotorcraft operators have underused fleets and are therefore not interested in a costly new-generation helicopter in the foreseeable future. 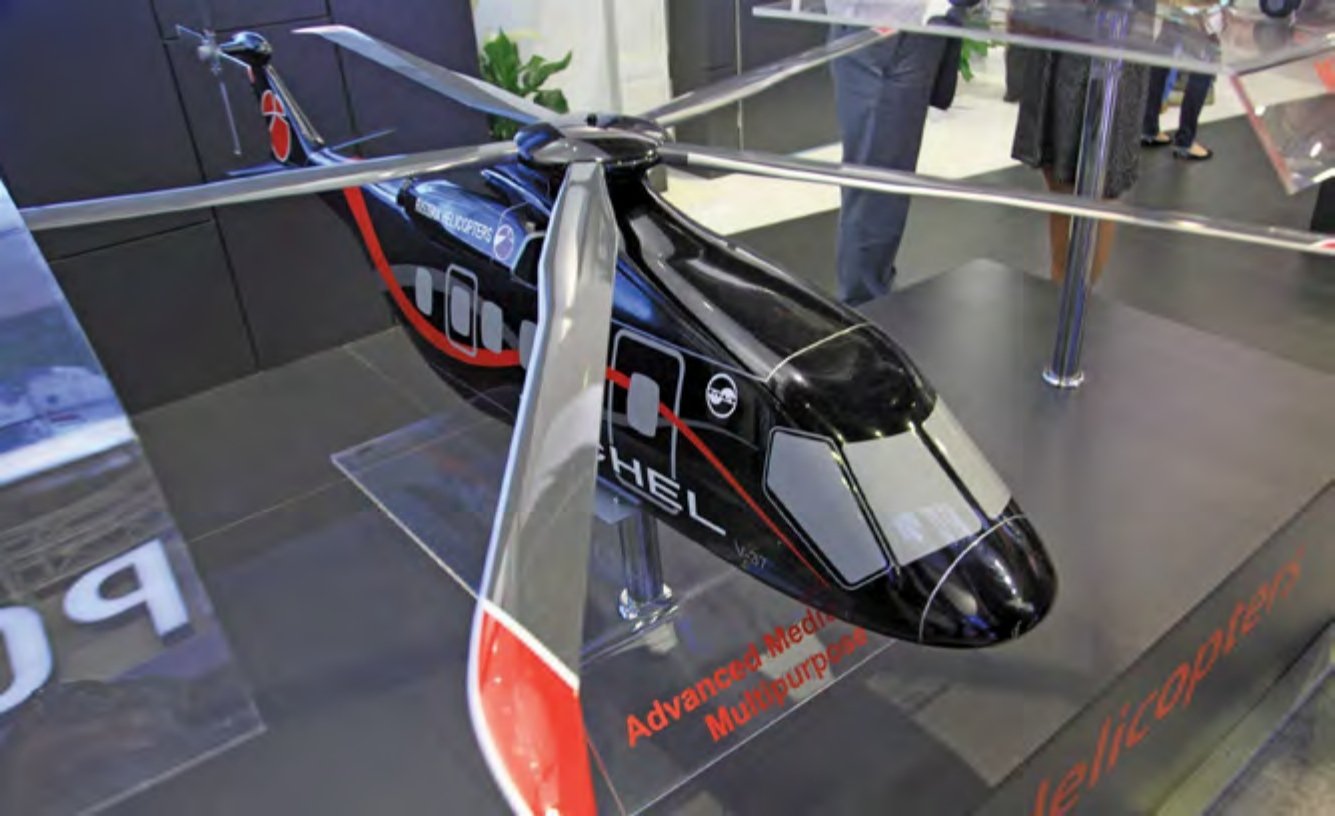 A scale model of the V-37/ PSV/RACHEL was first revealed by Russian Helicopters during 2012. The design is intended to boast a maximum speed some 1.5 times higher than that of today’s medium-class rotorcraft in commercial operation.

In the event, the PSV/RACHEL programme was terminated by the Russian Ministry of Industry and Commerce in September 2014. The formal reason for this was the impossibility of achieving the desired results (as required in the technical specification) within the desired timeframe by relying on existing technologies. It was also noted in the termination report that it proved impossible to achieve high cruise speed without a serious increase in the operating costs; as a consequence, it turned out to be impossible to simultaneously meet all the requirements of the technical specification with the existing technologies in Russia.

However, it was said that the highspeed research should continue, centred on development of a new rotor system capable of achieving a maximum speed in excess of 189kts (350km/h), together with completion of the development work on the VK-2500M engine, which is intended to be used for re-engining the existing Mi-8 and Mi-17 fleets.

According to Yuriy Borisov, Russia’s deputy defence minister responsible for procurement, the technologies tested on the LL PSV flying laboratory will be used in the design and development of the new generation of high-speed military helicopters. Combining speed and agility, Borisov said these helicopters are set to be ordered by the Russian MoD within the new State Armaments Programme 2018-2025. He also mentioned the Russian MoD has already discussed with Russian Helicopters plans for designing a line of high-speed helicopters with a maximum take-off weight of 10,000 to 12,000kg (22,046 to 26,445lb), capable of maintaining a cruise speed of between 189 and 195kts (350 to 360km/h) and having a maximum speed exceeding 216kts (400km/h). 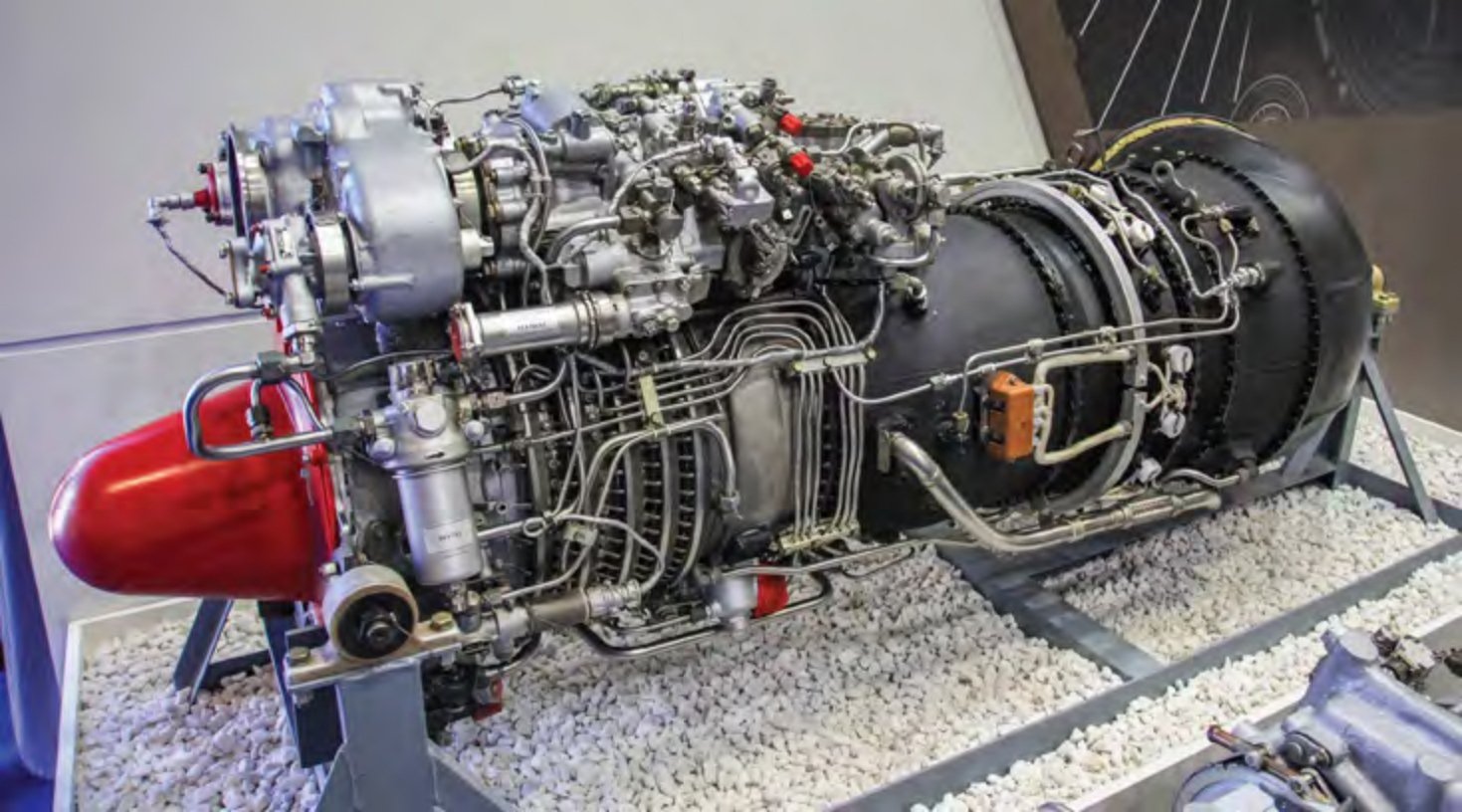 Borisov confirmed tests of the Mi-24 flying laboratory have already shown promising results that assured the Russian MoD the development of high-speed combat helicopters can be completed in a reasonable timeframe. He also claimed the upgrade potential of the helicopters that form the backbone of Russia’s Army Aviation has already been exhausted, consequently the Russian MoD will insist on new qualities that are achievable through use of high-speed tactics and new armaments.

In November 2016, the LL PSV was spotted at the Mil MHP flight-test centre at Tomilino wearing a military-style livery with olive green, black and brown tones, together with the large-size military-style side number ‘271’. Russian Helicopters has never released information on the maximum speed achieved by the LL PSV during the 2016 flight-test campaign and never hinted about its prospects of military use.

There is no doubt the interest of the Russian military in the programme has been motivated by progress of the US Future Vertical Lift (FVL) initiative, which is aimed at producing rotorcraft able to fly at fixed-wing aircraft-like speeds, exceeding 230kts (426km/h), operate at a combat radius of 234 nautical miles (434km) and use powerful engines for operation in high-hot conditions. That is the very reason the LL PSV is to be regarded as a demonstrator of new high-speed flight technologies aimed at a symmetric response for countering the FVL initiative.

At the same time, Kamov has some experience in high-speed research and undoubtedly it is keen to stay in the game.

Kamov’s General Designer Sergey Mikheev has in the past promoted the Ka-92, a high-speed rotary-wing machine for civil use that retains the full low-speed advantages of a helicopter. The Ka-92 concept features a co-axial compound layout, combining Kamov’s trademark rotor system with a pusher propeller in the tail for high-speed flight. This is exactly the same compound layout as used by the Sikorsky-Boeing SB-1 Defiant currently being developed under the Joint Multi-Role Technology Demonstrator programme undertaken as an integral part of the Pentagon’s FVL initiative. The Ka-92 was set to cruise at 243kts (450km/h) for transportation of 30 passengers over a maximum range of 809 nautical miles (1,500km). Its longer range and higher speed compared to a classic helicopter design is intended to be achieved by a dramatically increased lift:drag ratio. Some preliminary work on the new design has already been done, and based on this Mikheev has noted on many occasions in the past that he sees the development of this class of high-speed rotorcraft as an achievable engineering task within a timeframe of about ten years.

The eventual aim of the ambitious and rather costly wide-ranging effort undertaken by both Mil MHP and possibly Kamov would be for the Russian military to field new-generation transport and attack rotorcraft with unique flying characteristics in terms of speed, manoeuvrability and hover performance by 2030 at the earliest. 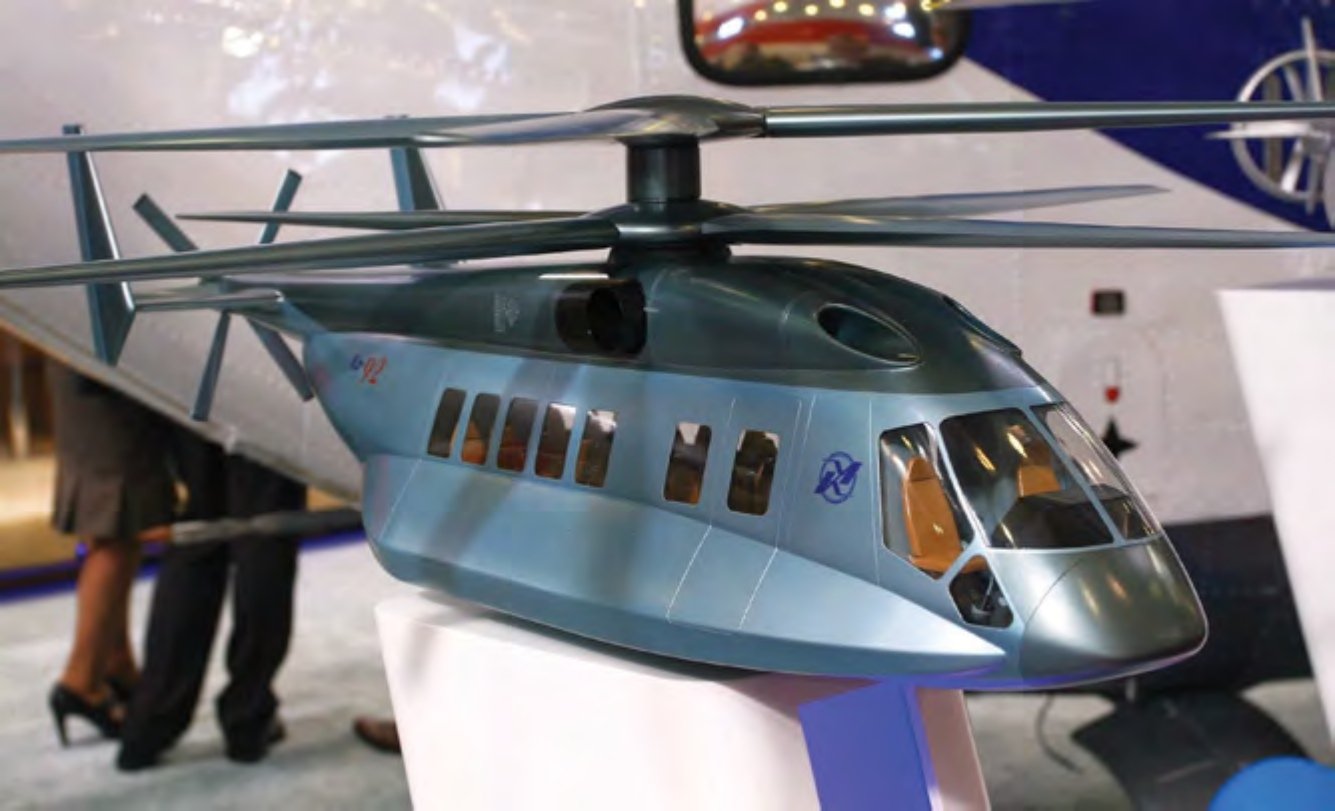 The Kamov Ka-92 concept sports co-axial rigid rotors, a pusher prop and is advertised with a cruise speed of 243kts (450km/h).