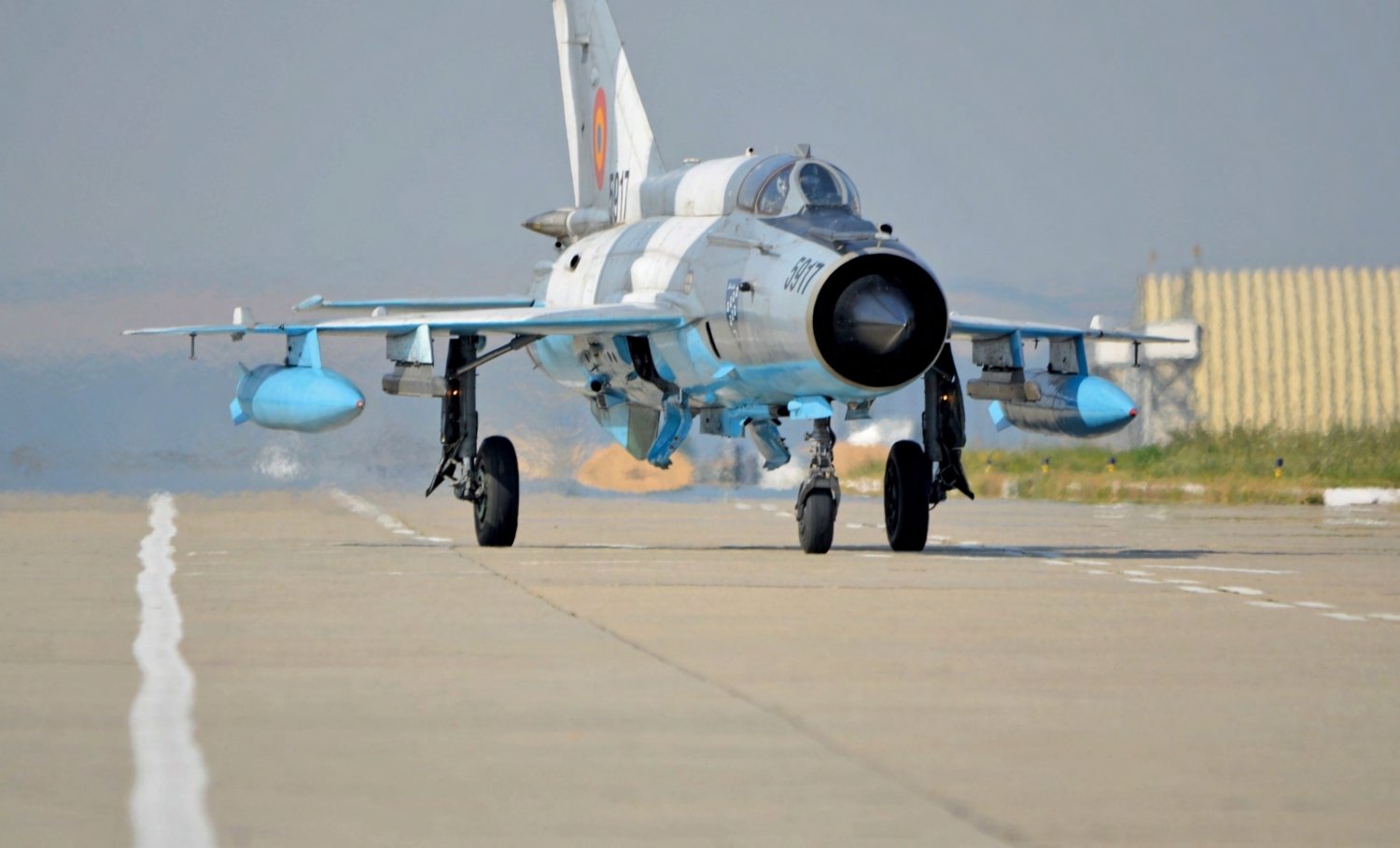 LanceR 5917 taxiing to its parking spot at Câmpia Turzii after an air patrol mission.

Entering Baza 71 Aeriana, in Câmpia Turzii, a small town in Transylvania, you get the feeling you’re back in the Cold War, with one fighter aircraft assigned which once represented the backbone of the Warsaw Pact – the MiG-21. Looking around the base, it’s obvious that something is changing. A lot of LanceRs are stored, and the flight line is now occupied by the LanceR, but the service life of the latest version of the MiG-21 is to end.

In 1989, after the fall of the Ceausescu regime, the Forţele Aeriene Române (FAR, Romanian Air Force) gradually moved from Soviet to Western doctrine becoming a member of NATO in 2004. Due to the collapse of the Soviet Union, economical and materiel support to the FAR ended, forcing the service to either upgrade or replace its MiG-21 fleet to avoid a capability gap with its new NATO partners.

Funding played a fundamental role in the choice. The FAR’s first initiative was to upgrade the MiG-29 under the Sniper programme, but the Romanian Government’s financial situation led to the project being abandoned. Instead the government opted to upgrade its MiG-21MF and MiG-21UM fleet, in service with the FAR since 1962.

The MiG-21 upgrade, dubbed the LanceR programme, started in 1993 in a collaborative effort between Romanian company Aerostar SA and Israel’s Elbit Systems Ltd. The LanceR programme was designed to increase the aircraft’s interoperability and compatibility with other NATO air forces. The programme involved 110 aircraft comprising 73 single-seat MiG-21 LanceR A ground attack variants, 23 single-seat LanceR C air superiority fighters and 14 two-seat LanceR B training and ground-attack versions; the final LanceR was delivered in 2003.

One of the problems former Warsaw Pact nations had to carefully manage after the dissolution of the Soviet Union was the availability and supply of spare parts for military equipment. To avoid shortages, the FAR calculated the total number of spares required to keep the LanceR fleet in service until the end of its operational service life.

Commander of Escadrila 711, Colonel Cosmin Cosma, said: “During the Cold War, Romania was part of a treaty [the Warsaw Treaty Organisation known as the Warsaw Pact], consisting of eastern European countries and the Soviet Union. The treaty ended in 1990 and today most of those nations are members of NATO. Since then, Romania has undertaken several initiatives at all levels in order to accede to NATO standards. The MiG-21 modernisation was one such initiative [at the technological level], the declared objective being an increased interoperability and compatibility with NATO air arms. At the time, complex and comprehensive assessments were made, trying to cover multiple aspects regarding optimal and sustainable exploitation of the modernised platform [MiG-21 LanceR].”

The aspect of spare parts availability was essential in the aircraft modernisation selection (MiG-21 or MiG-29) and decisionmaking process. At the beginning of 1990, Romania had a few hundred MiG-21s, of which 110 were chosen for modernisation with a substantial package of spare parts, calculated to cover the entire operational service life until 2020.

As part of the LanceR upgrade, the original MiG-21 avionics have been modified, such that the LanceR cockpit is more comparable to a new fighter, rather than an old Soviet aircraft. The instrument panel was redesigned with two Elbit multi-functional displays (MFD) and an Elop 921 head-up display and up-front control panel.

In the LanceR C, the left-hand MFD is colour and used for navigation and pylon management; the right side is monochrome and displays the radar search volume.

Essential navigation and combat information are projected in the Elbit DASH helmet-mounted display, the LanceR was one of the first operational aircraft to introduce the DASH into active service and provides the pilot with an advantage in close manoeuvring engagements.

Self-protection of the aircraft in hostile electromagnetic environments is provided by an Elta EL/L 8222R electronic warfare jamming pod which autonomously detects enemy radar and missiles and emits electronic signals to counter the threat. In addition to the jamming pod, further selfprotection is provided by two MPMN-60 chaff and flare dispensers fitted on the sides of the aft fuselage.

The LanceR B is a two-seat training version with a strike capability.

Another fundamental improvement is the multirole weapon pylon, as Col Cosmin Cosma explained: “Developed by Aerostar and Elbit, this pylon can carry Soviet [R-73] and Western [Python 3] missiles thanks to two different types of connector. One exception is the Magic 2 missile, which needs an adaptor fitted between the pylon and the launcher. This allows the Romanian MiG-21 to carry each type of missile on the same mission, increasing the capability of the aircraft.”

The original central pylon, only available for a fuel tank on the MiG-21MF, has been replaced by a new pylon adapted to carry Mk83 bombs and various pods. Potentially, the same aircraft can carry weapons for ground attack and air defence, on the same mission, but in practice, an aircraft is only configured for either air defence or ground attack.

Col Cosma explained how air defence is the primary role of the LanceR C, but after the retirement of the LanceR A version, the C-model can conduct ground attack missions using either the Aerial Reconnaissance Pod or the Rafael Litening laser designator pod. Air-to-surface weapons in the LanceR arsenal include S-5 and S-24 unguided rockets; BEM-100 and CL-250 free fall cluster bombs; Mk82 and Mk83 (Western), FAB-100, FAB-250 and FAB-500 (Russian) and Romanian-built 100kg and 250kg conventional bombs.

Câmpia Turzii Air Base is the venue for frequent joint exercises featuring allied aircraft. Exercise Dacian Eagle was the most recent event held at the Transylvanian base involved US Air Force F-15C Eagles deployed to Europe as a Theatre Support Package. Two Air National Guard units were involved; the 104th Fighter Wing from Barnes, Massachusetts and the 144th Fighter Wing from Fresno, California.

Baza 71 Commander, Colonel Marius Mihai Oatu explained the usefulness of Dacian Eagle: “Our pilots familiarise themselves with operational procedures and the standard decisions to be taken during a mission, and learn the techniques, tactics and procedures of their NATO allies, as required for different types of operations. The exercise was set up as a bilateral, total force training event to enhance interoperability with the Forţele Aeriene Române, to bolster readiness to conduct combined air operations, and participate in offensive and defensive counter air mission sets.

“For US Air Force pilots these exercises provide an opportunity to operate with different types of aircraft which joined NATO in the last 10-15 years, that might be in the air fleet of countries which could be the next real enemy.”

Colonel Cosma described the MiG-21 as being like a missile: “It loses energy flying at low speed, but is smaller and more difficult to acquire. Thanks to the LanceR upgrade, it can use Western weapons, which helped Romanian pilots achieve several victories in simulated combat against Western fighters.

“The successes against F-15s are most notable because the Eagle is larger, with a bigger radar signature, one that can be radar detected from a greater range, before the LanceR can be engaged by the F-15s beyond visual range missiles. Aircraft such as the MiG-29 and F-16 are smaller, which due to their smaller radar signature are likely to be acquired later, which means the outcome of the fight is more uncertain.”

The favourite tactic used by Escadrila 711 pilots is named the hit and run, which exploits the LanceR’s small size, high speed and limited autonomy. Despite the increased capability of the LanceR and its advancement in closing the capability gap with Western fighter aircraft, much of the edge demonstrated in aerial victories can be attributed to the quality of the training and abilities of the Romanian pilots.

After graduating from the Academia Fortelor Aeriene (AFA or Air Force Academy) in Brasov, a pilot’s training usually continues at the Scoala de Aplicatie Pentru Fortele Aeriene (SAPFA or Air Force Application School) at Boboc. As first and second lieutenants, the young pilots complete their flight training on the IAR-99 SOIM, usually flying between 70 and 100 hours in accordance with established goals and objectives which takes 12 to 18 months. Upon completion, a new LanceR pilot is posted to a front line squadron to start combat training to attain mission ready and combat mission ready qualifications.

There are always two Escadrila 711 LanceRs held on quick reaction alert (QRA) at Câmpia Turzii; air defence is the squadron’s primary mission. All pilots assigned to QRA duty undergo 24 months of special training which is divided into two stages. Stage 1 involves all aspects of the air defence mission and comprises 100 flight hours. Stage 2 covers different tactics used to intercept a threat aircraft and takes 80 flight hours. The pilot is declared combat ready for the QRA mission after the successful completion of Stage 2.

Ground attack training, the secondary role of Escadrila 711, is conducted on the firing ranges at Bogata and Cincu. 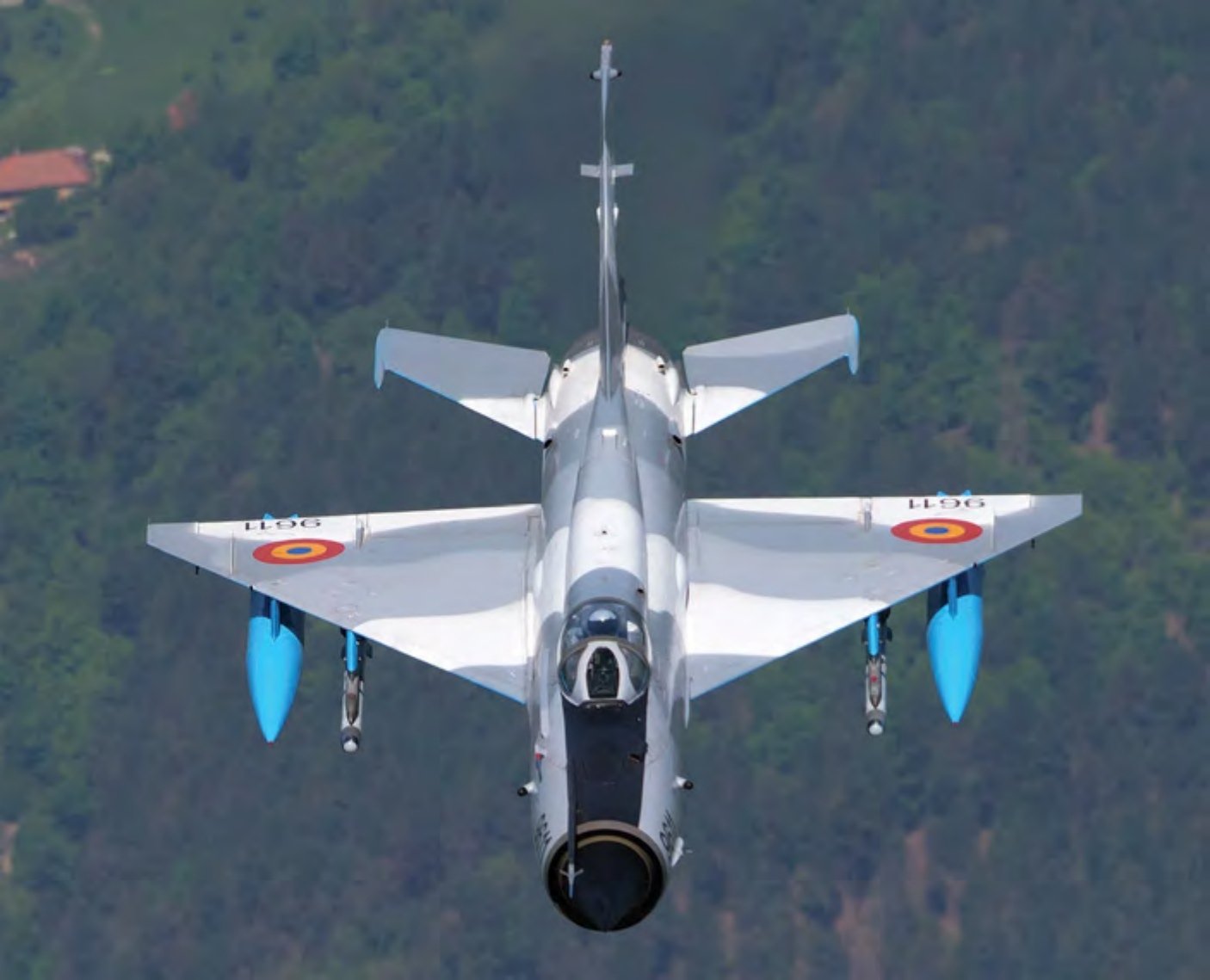 A LanceR assigned to Baza 71 Aeriana on patrol in Romanian airspace.

LanceR 9536 taxiing at Câmpia Turzii for a training mission. 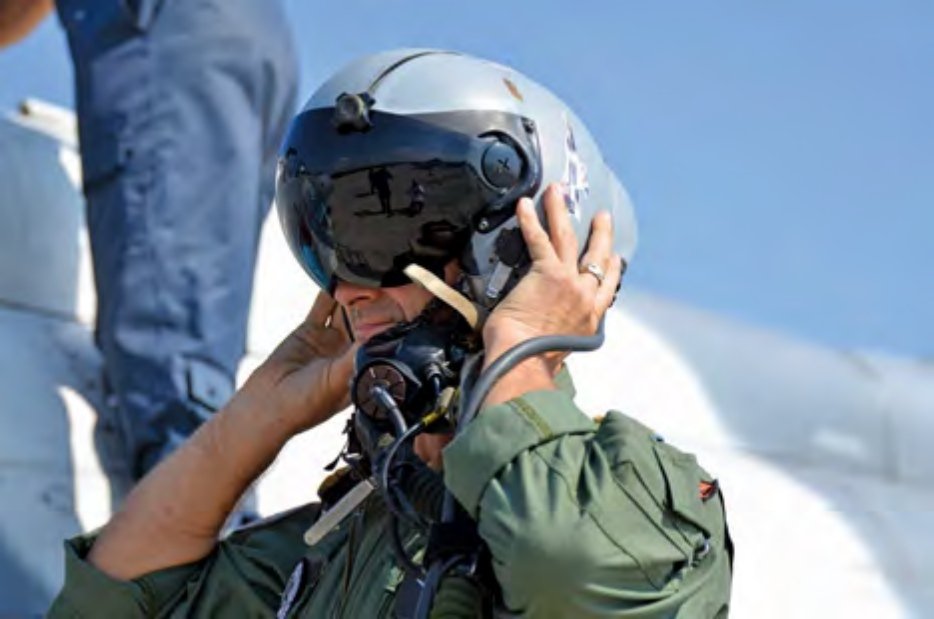 A pilot adjusts his DASH helmet. Commander of Escadrila 711, Colonel Cosma briefing with his crew chief after a mission.

As for the future of the LanceR, those aircraft previously assigned to Baza 86 Aeriana, will be transferred to Baza 71 Aeriana until 2020 when the type is scheduled to be retired, ending a service career that started in February 1962.