WITH NO LESS THAN 20 ‘ACES’ IN THE UNIT, 85 SQUADRON WAS ONE OF THE MOST SUCCESSFUL MOSQUITO NIGHT-FIGHTER UNITS, AS ANDREW THOMAS DESCRIBES 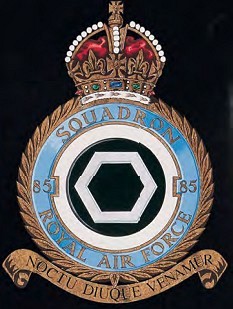 The distinctive hexagon badge of 85 Squadron. The Latin motto ‘Noctu diuque Venamur’, translates as: ‘We hunt by day and night.’
ALL VIA AUTHOR

The arrival of a single Mosquito II, W4087, gave 85 Squadron, equipped with Douglas Havoc night-fighters, a fleeting taste of the future on February18, 1942. The aircraft arrived for trials with the unit, which was based at Hunsdon, Hertfordshire and led by Wg Cdr Gordon Raphael. The de Havilland twin had been modified with a Turbinlite searchlight fitted into the nose. In this guise, the elegant Mosquito was given an adverse report and W4087 was returned to 1422 Flight at Heston, Middlesex.