By the time it gained its independence from Yugoslavia in 1991, North Macedonia already had a rich aviation heritage. A key part of that was a police helicopter unit established in 1969. Igor Božinovski provides an overview of the republic’s first state-controlled aviation unit. 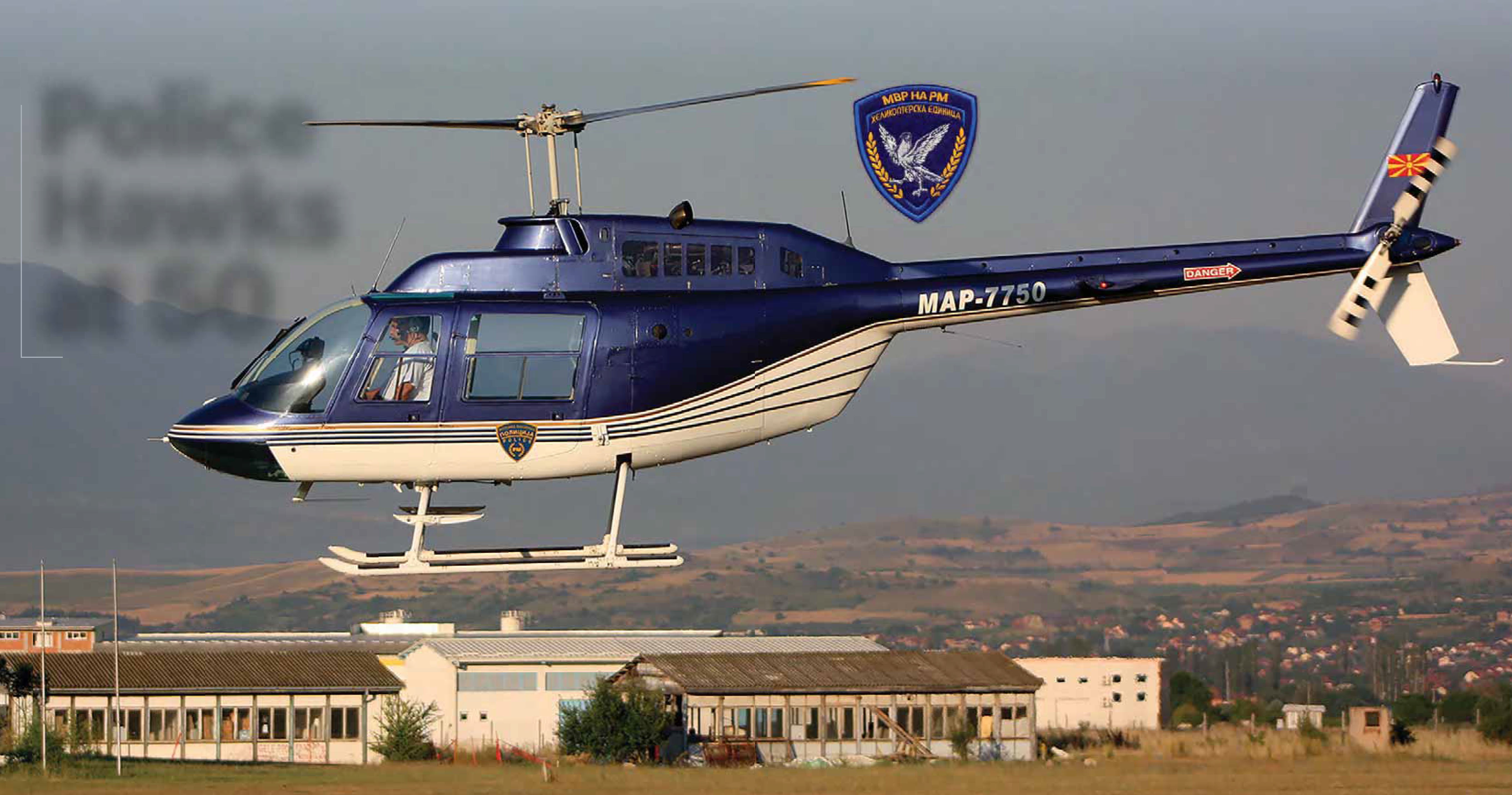 Nicknamed ‘Komarec’ (‘Mosquito’) in contrast with the larger AB212, Macedonian Police AB206B MAP-7750 was purchased as an attrition replacement after the loss of the initial AB206A – the police’s first helicopter – in autumn 1972. The low-skid JetRanger II (c/n 8365) was manufactured by Agusta and joined the Yugoslav civil aviation register as YU-HBD on September 1, 1973.
Dragan Cvetic via Igor Božinovski

With the Macedonian economy improving and Yugoslavia’s republics enjoying increasing independence from Belgrade, in the mid-1960s preparations began for the formation of a small helicopter unit within Macedonia’s Republički Sekretarijat za Vnatrešni Raboti (RSVR, Republic’s Secretariat for Internal Affairs).

The police complex in the village of Idrizovo, 6. miles (11km) southeast of the Macedonian capital Skopje, was chosen to house the future police helicopter unit. Macedonia’s Milicija (Militia - the local name for the police forces) helicopter unit was off icially established on November 27, 1969. It become truly operational in 1970 when an Agusta-Bell AB206A JetRanger I was acquired from Italy. A Bell 212 (c/n 30884, ex YU-HPB, Z3-HHB, now MAP-7751) was added before the end of the decade, by which time the original JetRanger had been lost in a take-off accident and replaced by AB206B JetRanger II (c/n 8365, ex YU-HBD, Z3-HHA, now MAP-7750).

As the Yugoslav crisis came to a head in the early 1990s, Macedonia’s citizens voted for independence in a September 1991 referendum and on November 17 that year the Republic of Macedonia was declared a sovereign and independent democratic state. As a result, the RSVR became the Ministerstvo za Vnatrešni Raboti (MVR, Ministry of Internal Aff airs), the word Milicija changed to Policija (Police), while the police helicopter unit was off icially renamed the Samostojno Helikoptersko Oddelenie na Ministerstvoto za Vnatrešni Raboti (Independent Helicopter Flight of the Ministry of Internal Aff airs).

In 1999, the helicopter flight was subject to another name change, becoming the Helikopterska Edinica ‘Jastrebi’ (Helicopter Unit ‘Hawks’).

A year later, a Bell 412EP (c/n 36260, ex N9026S, Z3-HHC, now MAP-7752) was added to the inventory. This was funded using US$5m provided by Taiwan when Macedonia recognised the Republic of China’s status as a country. The twin-engine utility helicopter was built at Bell facilities in Mirabel, Canada, in June 2000 and delivered to Macedonia on November 22 that year. The Kosovo crisis began in early 2001 when Macedonia’s ethnic Albanian minority began an uprising demanding greater rights. As rebels launched attacks on police stations, checkpoints and border crossings, the Macedonian government forces found themselves small in size and poorly equipped. Despite personnel shortages, the MVR put its helicopters on 24hr alert, using its recently acquired Bell 412EP and the AB212 to deliver food, water and ammunition to isolated border crossings. On a daily basis, the police rotorcraft also transported elite ‘Tigar’ anti-terrorist units and evacuated casualties and civilians. After months of skirmishes, EU and NATO support enabled the authorities to strike a peace deal.

Ambitious plans to upgrade the police fleet after the war were thwarted, but in late November 2007 the Bell 412EP became the first European helicopter to receive the Astronics Max-Viz 1000 enhanced vision system for use at night and in poor visibility conditions. The aircraft was also equipped with a Breeze-Eastern HS-20200 rescue hoist. In late 2008 a pair of Mi-171 helicopters (serials 710 and 711 and tail numbers 806 and 807, later MAP-7710 and MAP-7711) were purchased from a Lithuanian company for US$20. 4m, together with a pair of Mi-17V-5s (serials 712 and 714, later MAP-7712 and MAP-7714) acquired for a cost of US$21. 7m. Unusually, the Mi-171s both wore the camouflage of the Iraqi Air Force, the original intended customer. The Russian-made aircraft were stationed at a new base in Petrovec, adjacent to Skopje International Airport. Here they served alongside the secretive Elbit Systems Hermes 450 unmanned aerial systems operated by the MVR’s Uprava za Bezbednost i Kontrarazuznavanje (UBK, Administration for Security and Counterintelligence). Macedonian Police Bell 412EP MAP-7752 and AB206B MAP-7750. While the need for an expensive engine overhaul and the decision to appoint a private company for SAR/HEMS missions puts the future of the Bell 412EP at risk, the veteran AB206B departed for Patria Helicopters in Sweden last December for a scheduled inspection.
Igor Božinovski

The two militarised Mi-171 aircraft were also equipped with chaff/flare dispensers and four (optionally six) external weapons racks for carrying guided and unguided rockets, including Elbit’s STAR (Smart Tactical Advanced Rocket) precision-strike system – a Soviet-era S-8 80mm (3. 15in) calibre unguided rocket with a laser guidance kit. For launching the STAR, the standard 20-shot B-8V-20A rocket pods were modified to carry four guided weapons each. The first STAR was successfully fired from a Macedonian Mi-171 at the Krivolak military training range, near Negotino, in the first half of 2013.

In an historic first operational deployment outside national borders, a Mi-17V-5 together with 12 pilots and technicians and 15 ‘Tigar’ operatives went to neighbouring Serbia in May 2014 to support disaster relief operations in response to the catastrophic floods in that country.

The introduction of the Mi-17/171 within the MVR further emphasised its requirement for more pilots, engineers and mechanics. In response, the MVR took on personnel from the military but also from the Direkcija za Zaštita i Spasuvanje (DZS, Protection and Rescue Directorate) – the latter provided an aviation engineer and a qualified AT-802A Fire Boss pilot that converted on to the Russian helicopters. For modernisation and scheduled maintenance of the Hips, the MVR also relies heavily on the capabilities and knowhow of the Macedonian Air Force. Macedonian Police Mi-171 MAP-7710 during the Autumn Storm 2018 military/police exercise. The Mi-171s are combat-capable and a first firing of the Elbit STAR guided rocket occurred in the first half of 2013.
MVR via Igor Božinovski

However, as the pilot shortage became critical at a national level, a joint Macedonian-Israeli Centar za Obuka na Piloti (COP, Pilot Training Centre) was established at Petrovec under a May 2011 agreement worth US$42m. The COP’s first four instructors successfully passed conversion training on the police AB206B in December 2012, before going to Bell Helicopter to practise critical emergency landing manoeuvres early the following year.

By September last year the COP had produced nine new police helicopter pilots as well as providing full-motion simulator training for Mi-17/171 pilots. In another milestone for the police, Vesna Petreska became the first female pilot to join MVR in October 2014. She currently serves as a qualified pilot for the Bell types. The ANVIS-HUD helmet system displayed in front of Macedonian Police Mi-171 MAP-7711. Between 2012 and 2014, all four police ‘Hips’ underwent the two-stage ‘Balkan’ upgrade that provided them with NVG-compatible cockpits.
MVR via Igor Božinovski

The service experienced a first fatal mishap when Mi-17V-5 MAP-7712 crashed during an NVG-supported night training flight on July 10, 2014. The aircraft went down near the city of Strumica, 75 miles (120km) southeast of Skopje after hitting an unlit 394ft (120m) transmission tower.

The police’s AB212 and a single Mi-17 were called in during fighting in the Divo Naselje settlement of Kumanovo city on May 9-10, 2015. The clashes saw MVR forces attacked by an armed group identifying itself as the Kosovar National Liberation Army (NLA). During the shootings, eight Macedonian police and ten militants were killed, while 37 other members of the police were wounded. The incident ended with the arrest of 28 men who were later charged with terrorism-related offences. The most recent continuous operation that saw major involvement of the police helicopters was the migrant crisis of 2015. The aircraft supported aerial monitoring of the critical borders with Greece and Serbia on the so-called Western Balkans refugee/migrant route. MVR also supported the Swedish National Police Air Wing Bell 429 helicopters deployed in the same efforts.

However, since the Mi-17V-5 crash, the focus of Macedonian police aviation has been primarily on keeping the current helicopters airworthy. The AB206B received scheduled maintenance in Switzerland in summer of 2015 while the Bell 412EP was sent to Patria Helicopters in Sweden for its scheduled five-year/5,000hrs inspection in February 2016, returning home that June.

Various maintenance facilities were considered for the first scheduled overhaul of the Russian-made helicopters – including the Czech LOM Praha, Croatian ZTC, Lithuanian Helisota and Aviabaltika, Polish WZL-1 and Slovak LOTN Trenčín. Eventually, the pair of Mi-171s went to Serbia’s Batajnica-based Moma Stanojlović military aeronautical plant. They became the first such aircraft to be overhauled there, although the dynamic components actually underwent general overhaul in Russia. Work was completed in late October 2018 and included changing the camouflage for a police-blue-dominated civilian scheme with white stripes and silver undersides. In the same year, the then Republic of Macedonia and Greece agreed on a new name – the Republic of North Macedonia – which came into force last February. Responsible for the force’s first operational deployment outside national borders, Mi-17V-5 MAP-7714 was deployed to neighbouring Serbia between May 18-23, 2014, to support disaster-relief operations after catastrophic floods.
Igor Božinovski

With the 40-year-old AB212 facing an expensive engine overhaul, several options have been proposed, including the acquisition of new or low-hour Pratt & Whitney Canada PT6T-3D TwinPac turboshafts. Alternatives were to overhaul the existing engines and keep the helicopter in use, or sell the aircraft, perhaps together with the Bell 412EP, and replace with a unified fleet of three new Bell 412EPIs or Bell 429s configured for police work as well as search and rescue (SAR) and helicopter emergency medical services (HEMS) roles.

A proposed Bell 429 acquisition received wide support among government institutions and a related memorandum was signed in May 2018 between MVR and the Canadian Commercial Corporation (CCC). However, the purchase of new Bells has not been put into action, for undisclosed reasons. The plan was reportedly impacted by the unexpected decision to appoint a private company for SAR/HEMS missions. Last October 29, the local, recently established SARHEMS company was declared winner of the tender for operations in North Macedonia over an eight-year period. The public-private partnership agreement is worth €72m. The sole bidder in the public procurement, SARHEMS reportedly plans to begin operations by mid-2020 with two SAR/HEMS-configured helicopters and utilising the infrastructure of the Pilot Training Centre at Petrovec. The takeover of COP facilities and hangars by SARHEMS, however, is likely to face opposition from the defence ministry, which insists the centre is theirs.

Further evidence that rejuvenation of the police helicopter fleet is in limbo came last November, when interior minister Oliver Spasovski didn’t mention any new aircraft acquisition during his speech marking the helicopter unit’s 50th anniversary in Idrizovo. The event did see the public promotion of Nenad Aleksovski as the new chief of the MVR’s Department of Aviation Units. Macedonia’s police aviation is entering its next half-century with a rich history and huge operational experience, plus a fleet of six helicopters with an average age of 24. years. focus is currently on the overhaul of the sole Mi-17V-5 and the ongoing scheduled inspection of the AB212 and AB206B that departed Skopje for Patria Helicopters in Sweden on December 12, 2019.

The AB212 will likely undergo another period of scheduled maintenance and limited modernisation of new instruments and provision for using the rescue hoist acquired in 2007. Moreover, police aviation is facing the challenge of a possible reduction of its fleet to pre-2009 size, as a result of the nation’s strategic defence review in 2018. This revealed that integration of the police’s three Mi-17/171s within the Macedonian Air Force was being considered.

Maybe the biggest threat is the SARHEMS company’s need for a significant number of local, qualified pilots. If not properly managed, this process could leave the police and military without their most experienced pilots. During the 2001 conflict, Macedonian Police Bell 412EP Z3-HHC adopted a two-tone camouflage. The rebels failed to recognise the helicopter and never targeted it, even during low-level missions over their strongholds.
Igor Božinovski