The US Marine Corps is partway through a complete recapitalisation of its aviation assets, in some cases replacing Vietnam-era equipment with modern platforms, as it positions itself to fight in future conflicts.

The Marine Corps is unique among the US armed services in that it is expected to fight both from ship and shore. In a high-end fight, for example, it expects that 25% of its missions will be flown from the deck of a US Navy aircraft carrier or amphibious assault ship, and although the remaining 75% are likely to be flown from bases ashore, they also must have the option of reverting to a sea base. Accordingly, these requirements are shaping the replacement of the aviation fleets.

Just weeks before his retirement after a 37- year career, Deputy Commandant of Aviation Lieutenant General Jon Davis provided details of how the transition is progressing: “The United States Marines Corps is a combined air-ground team that is ready for anything; we’ve experienced 15 years of the low-end fight, but we’re also ready for any kind of fight that comes our way. When the United States is least ready, the nation wants the Marine Corps to be most ready.”

Explaining the operational advantage of establishing a sea base to allow the Corps to achieve high sortie rates General Davis said: “The sortie rates we have for our carriers and amphibious ships are based on a two-hour mission, 400 miles out and 400 miles back. We’ve figured out how to air refuel, but the engineering challenge is re-arming. We establish facilities where we can land ashore and practise that. For the last ten years we’ve been hot-refuelling and re-arming our AV-8Bs and now do the same thing with F/A-18s and F-35Bs. We land the aircraft, give it a full load of gas and a full load of ordnance and it takes off again. It generally gets airborne within 15 minutes: the pilot never shuts the engine down. We’ve perfected that technique, we used it operationally in Iraq and Afghanistan and it works very well for us to get our sortie rate up.

“When we go ‘Winchester’ for ordnance, with the STOVL aircraft we can land on a small ship if need be, or on a piece of tin we’ve laid down, refuel and rearm them, and get them airborne again to keep the high performance fighters deep into the adversaries’ terrain.” The term ‘Winchester’ refers to the aircraft or helicopter being out of ammunition.

The Marine Corps is now well into its recapitalisation journey, with the replacement of CH-46 Sea Knight by the MV-22B Osprey tiltrotor and AH-1W Sea Cobra and UH-1N Huey helicopters with the AH-1Z Viper and UH-1Y Venom platforms respectively, and the venerable fixed wing KC-130R Hercules, which has largely given way to the nextgeneration KC-130J Super Hercules.

Gen Davis explained that every type in Marine Corps aviation is in transition right now and doing well: “The KC-130J is a tried and true; it’s a great airplane for us. We’re in the final year of production for UH-1Ys, and we’re receiving AH-1Zs – tremendous airplanes [and a] great capability for us. The MV-22B is probably the most in-demand platform in the world; it’s forward-deployed in our Marine Expeditionary Units, it’s forward-deployed in the Asia-Pacific region and it’s also deployed with Special Purpose Marine Air-Ground Task Forces both in the Middle East and African areas of responsibility. It’s unlike anything else we’ve had in the past. We have just flown four MV-22s from Hawaii to Australia and we fly them routinely across the Atlantic Ocean, as well. It’s a platform that can actually self-deploy and that’s a tremendous capability, when you think about it.”

The first squadron to forward deploy, Marine Fighter Attack Squadron 121 (VMFA- 121) ‘Green Knights’, is now based at Marine Corps Air Station Iwakuni, Japan. Ten aircraft are currently on strength; a further six will be delivered by the end of the summer. The most recent squadron too complete F-35B transition is VMFA-211 ‘Wake Island Avengers’, which has reached initial operational capability. Both units will deploy aboard ships in 2018.

The next three squadrons to transition to the F-35 are currently flying the F/A-18 Hornet: VMFA-122 ‘Werewolves’ at MCAS Beaufort, South Carolina will move to Yuma, Arizona; VMFA-314 ‘Black Knights’ at Miramar, will relinquish its Hornets and stand up as an F-35C squadron; and VMFA(AW)-225 ‘Vikings’ will transition from the two-seat F/A-18D to the F-35B and become VMFA-225. The two subsequent squadrons will also be former Hornet units as the Marine Corps recapitalises its strike assets. 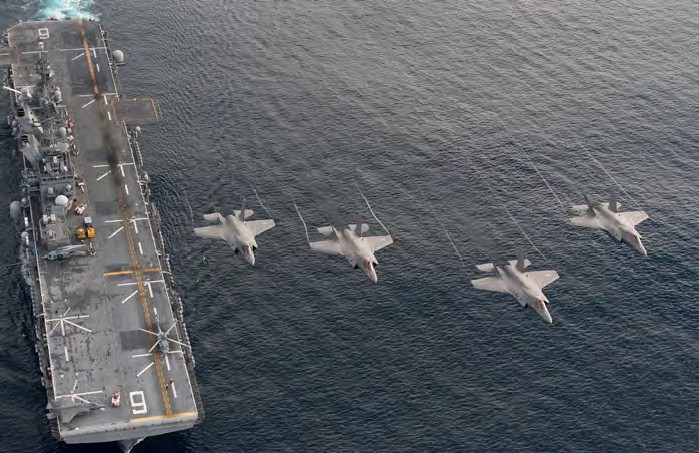 Recapitalisation in the US Marine Corps comes with no higher profile than the F-35B Lightning II. The service has already transitioned two AV-8B Harrier squadrons to the type and transition of the first F/A-18 Hornet unit is imminent.
Lockheed Martin 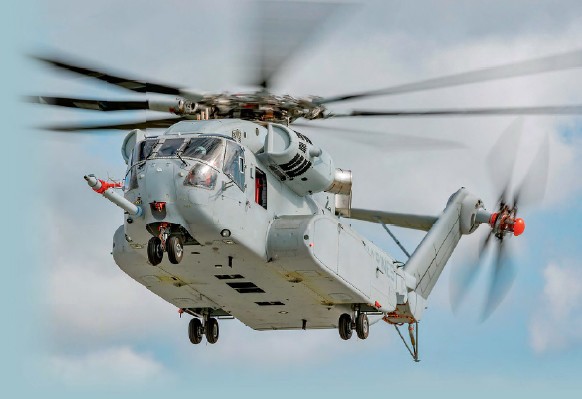 With a max take-off weight over 84,000lb, Sikorsky’s CH-53K King Stallion is one of the largest helicopters in the world. Despite its high unit cost, US Marine Corps’ leaders believe the aircraft is unmatched in its capabilities and applicability to the roles required by the service.
Lockheed Martin

Commenting on the fifth-generation fighter, Gen Davis praised the aircraft: “Operationally, the F-35 gives us tremendous capability in every realm: air-toair, air-to-ground and strike. I’ve seen a lot of things in my 37 years of operations as a Marine strike aviator and commander of our Fighter Weapons School at Yuma, but I’ve never seen anything like the F-35 and what it’s doing for our Marines. What they are doing with that airplane is truly extraordinary and qualitatively fantastic. There’s a lot of innovation, a lot of capability; it is the most capable airplane that we’ve ever fielded.”

By way of example, General Davis described a recent exercise at Beaufort, during which four F-35Bs and four Hornets were pitted against a mixed force of 20 adversaries, comprising F-5N Tigers, F-15C Eagles and F-16C Fighting Falcons: “It was a large force exercise, eight good guys up against 20 very qualified and experienced adversaries. It was a self-escort strike scenario with air-to-air and air-to-ground weapons. It went very well for the F-35s and F/A-18s, but not so well for the adversaries. In the debrief we had a brand-new captain stand up – one of the F-35 pilots – who talked about what he thought, what he saw, what they did. I would say his percentage of AMRAAM shots was about perfect, as far as the shots he took and the shots that scored kills. An Air Force Colonel, an F-15 pilot, said it was really cool to have young captains in the gun squadrons citing the Marine as amazing. He is a student in our training squadron! We have a brand-new guy that thinks, operates, feels and has the confidence of a three-year veteran, but he’s right out of training.

“We’re just scratching the surface of what we can do with this airplane, it’s really phenomenal. It makes everybody a little bit better and gives us the ability to land on a small ship or at a FOB [forward operating base] that extends the reach, depth, breadth and agility of the Marine Air-Ground Task Force. It’s exactly what we’ve been after for about 30 years now.”

The Corps’ current heavy-lift helicopter, the Sikorsky CH-53E Sea Stallion, is the next type in line for replacement; 200 CH-53K King Stallions are being procured. Providing over twice the lifting capacity of the older version, the CH-53K is designed to lift a battalion of Marines and their equipment from the deck of a ship, 100 miles ashore in one period of darkness.

Despite some crossfire during its development for its cost, General Davis says no other helicopter in the world can match the CH-53K’s capability: “Unit cost of a CH-53K is $88 million and a V-22 is about $79 to 80 million, so about the same, but you can’t compare the two. I could buy other airplanes, but I’d have to buy three times as many. I could do that, but I’d also have to have three times the number of maintainers [and] I’d have to have a ship with enough room on the deck to fit the additional airplanes. So to me, we’re paying a fair bit of money for the CH-53K, but we’re getting an outsize impact. It’s a true heavy-lift helicopter that has incredible capability. If we could have found a cheaper alternative we’d have done it, but there’s nothing out there that can do what this thing can do. 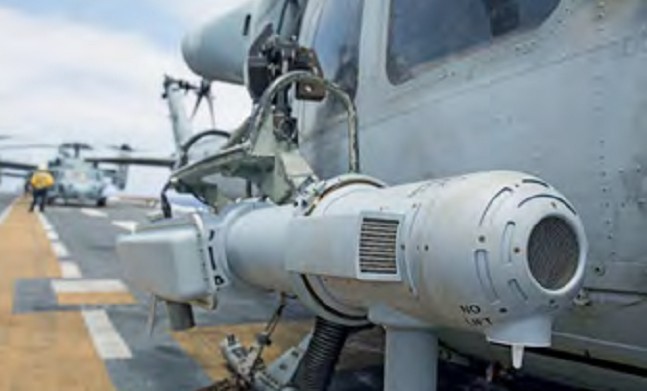 “When you’re operating at range, it’s not just about logistics, it’s all about logistics. If you’re in a fight out there, you want to build a littoral logistics capability and there’s no better friend when you’re flying relief supplies in on a humanitarian relief mission, than 36,000 pounds of stuff. It has more then twice the lift and so it’s a physics problem. If I need ammunition or food to sustain and support or help a friend in need, I can get the stuff there three times as fast, with one airplane, than I can with three other airplanes, and there’s nothing else that can do 100kts – that’s the design specification.” 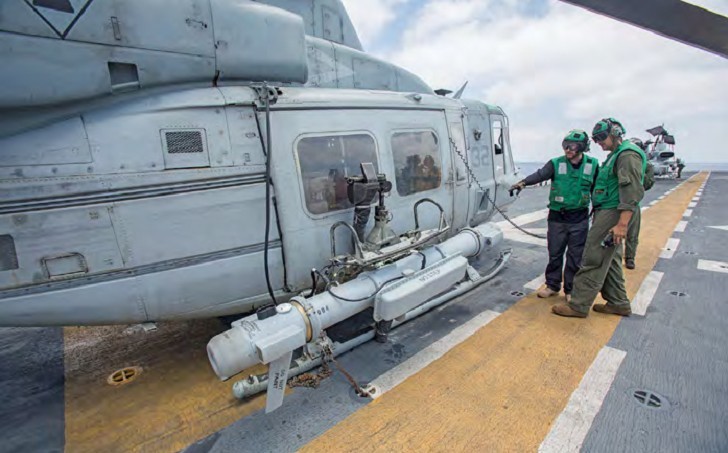 General Davis said the Marine Corps’ future electronic warfare strategy is a distributed strategy, with the F-35 at its core: “I’m not able to talk to you about all of the things the F-35 can do, but it does a lot of things that we’ve never been able to do before with a platform, so it’s a tremendous capability.

“You have to watch them operate to understand how that comes together, electronic warfare, self-escort strike, sensor fusion. We’re going to get out of the EA-6B Prowler business in 2019. It’s been a great airplane for us, but it’s what we call a highdemand, limited density asset – a Prowler can’t land on an amphibious ship, so it can’t be out there with the Marine Expeditionary Units, you have to co-locate it nearby so many a time we preserve those assets for the bigger fights.”

The Marine Corps’ concept is to bring an electronic warfare capability to everyone, including the individual Marines in the foxholes. Gen Davis explained how the Marine Corps has developed a capability called Intrepid Tiger, which started out as a surveillance and jamming system housed in a pod first used on the AV-8B Harrier: “Then we put it on our F/A-18s; it’s on our UH-1Ys, and it’s going on our Zulus [AH- 1Zs], MV-22s, C-130s and our CH-53Ks. We also building an RF jammer under Intrepid Tiger Block 2X, which allows every single platform to become a jamming platform.” 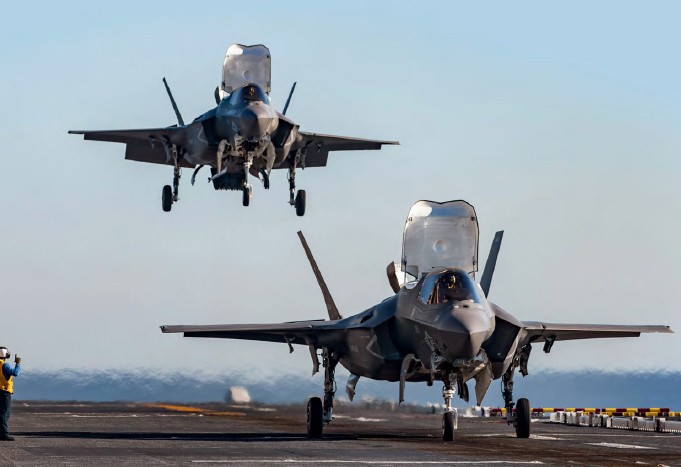