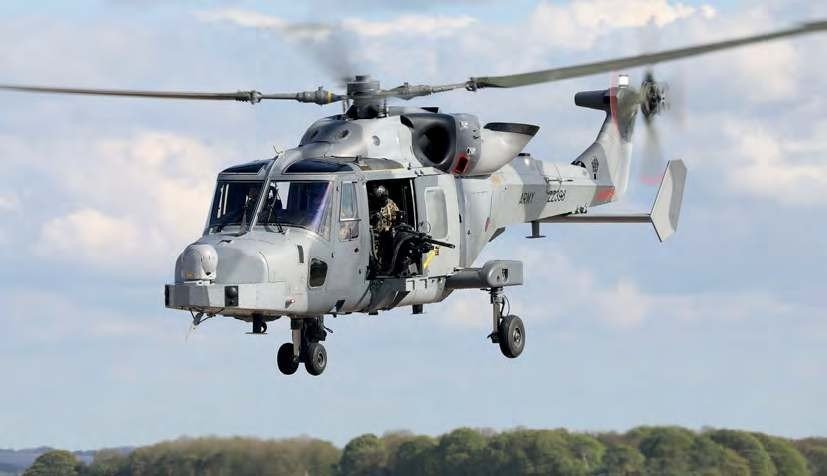 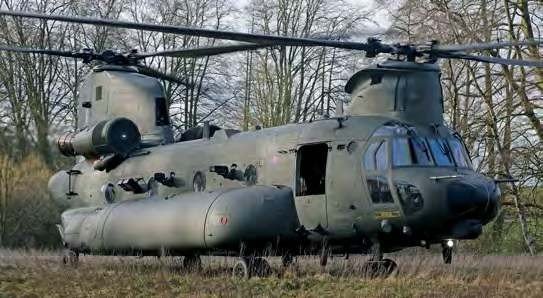 Two frontline and one training squadron operate a fleet of 34 Wildcat AH1s delivered to the Army Air Corps, six of which are assigned to 847 Naval Air Squadron, Commando Helicopter Force. Optimised for intelligence, surveillance, target acquisition and reconnaissance, the Wildcat AH1 is a multi-role helicopter that conducts limited troop and supplies’ transport, escort and force protection, ofensive action and control of ires. In general, aircrew are upbeat about the Wildcat AH1’s advanced sensors, integrated avionics, camera and secure communications, but some have also said the type needs a radar and weapons similar to Royal Navy Wildcat HMA2s to reach its full potential.

Joint Helicopter Command’s Commanding Oicer, Rear Admiral Jonathan Pentreath, reckons the Wildcat is a success story for both the Army and Navy. He said: “Wildcat represents a clear step change in capability. There has never been any doubting the capability of the Royal Navy HMA2 with its Selex Seaspray radar and a comprehensive suite of mission systems. Our operational testing, including that alongside Apache, confirms the Army variant has really come of age during the last 12–18 months. For example, four Wildcat AH1s [assigned to 661 Squadron] completed a successful four-month deployment to Amari Air Base, Estonia, supporting a battlegroup and participating in Exercise Siil [a large mobilisation exercise for the Estonian Defence Forces]. This was the Wildcat AH1’s first operational deployment. It went well and proved the value of deploying a small number of aircraft to areas where they are seen by potential competitors. In July 2018, two Wildcats from 847 NAS also concluded a ive-month deployment to the Far East for Exercise Jeanne d’Arc aboard the French assault ship, FS Dixmude [L9015] with no issues.”

Tests involving Wildcat during the summer included the first successful launch of two AGM-114 Hellire airto- surface missiles by an Apache AH1 against a target designated by a Wildcat, confirmation of the Apache AH1-Wildcat AH1 teaming. This concept will be further enhanced when the AH-64E replaces the legacy Apache AH1 from 2022.

Addressing Wildcat AH1 mission system enhancements, Rear Admiral Pentreath confirmed they are under consideration. He said: “Our initial concept was of Wildcat hunting targets ahead of the Apache, but what we are inding more efective is Wildcat stepping back, using its multispectral sensor to direct the Apache on to its target. During the autumn, we conducted operational tests with the Seaspray radar. It will be fantastic having synthetic aperture and ground moving target indicator, which should allow us to markedly extend our capability for a relatively small investment.”

Rear Admiral Pentreath confirmed that future operational priorities for the Wildcat AH1 are introduction of a tactical datalink, increased endurance and a radar in that order. Given the radar is tried and tested, operationally efective and in service, incorporating it should be relatively easy and cheap to do. Arming its Wildcat AH1s further is not a priority at this time.

Chinook is JHC’s heavy-lift helicopter. The fleet currently comprises 38 Chinook HC4 and Chinook HC4A variants, eight Chinook HC5s and 14 Chinook HC6s (CH-47F platforms itted with UK speciic equipment). In recent years, JHC has focused on rationalising and upgrading its legacy fleet to improve both capability and safety. Digital cockpits were itted under Project Julius, and a digital automatic light control system (DAFCS) is being itted on all models except for the HC6s. Once itted, Chinook HC4s and Chinook HC4As will become HC6s and HC6As respectively. The fleet is also being equipped with an airborne collision avoidance system.

Fleet modernisation is far from complete as Rear Admiral Pentreath confirmed: “Fleet uniformity is improving, but it is not complete yet. They will all have a Julius cockpit and DAFCS by the summer of 2019. There will be three variants at that point, all of which will be largely indistinguishable from the HC6 aside from the fat-tank HC5s, which are currently deployed to Mali because of their extra endurance and range. Despite the technical changes, serviceability is an issue with some of the older airframes. They are inevitably spending more time in maintenance than we would wish. The long-term plan is to further modernise and upgrade the Chinook fleet to keep it going for many years more. As part of this process, we are working with the US government to procure up to 14 CH-47ER [Extended Range] aircraft to replace the oldest of what were originally Chinook HC2s. At some point downstream, the plan is to upgrade the other variants bringing them to CH-47F Block 2 standard. Having acquired our first Chinooks during the 1970s, we are efectively at their operational mid-point around 50 years.”