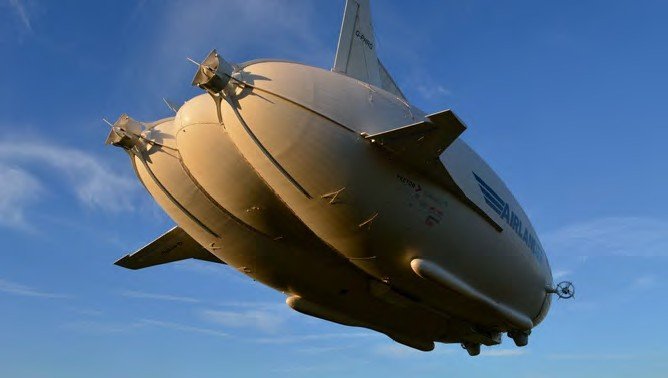 A distinctive angle on the Airlander 10 during its latest flight from Cardington. At 302ft (92m) long and 143ft (43.5m) wide, this is the world’s largest aircraft.
Michael Miklos

Airlander 10, the world’s largest aircraft, flew again from its Cardington, Bedfordshire base on May 10 for the first time since its heavy landing accident last August. It took off at 17:28hrs and flew for 180 minutes before landing at 20:15hrs and being re-secured to its mooring mast at 20:20hrs. On board were Airlander’s two test pilots, Dave Burns and Simon Davies.

The Airlander has now flown three times. Manufacturer Hybrid Air Vehicles (HAV) made several modifications to the Airlander following last August’s incident, including a more powerful and manoeuvrable mobile mooring mast and the additional ‘landing feet’ of the Auxiliary Landing System (ALS) beneath the aircraft. Objectives for the latest flight were to conduct a full test flight, establish the Airlander’s basic handling characteristics and collect performance data. HAV said the new ALS performed as expected and that the next few flights “are likely to be at least a week or two apart” to allow for a full analysis of the data collected during the May 10 flight.