The land of mountains 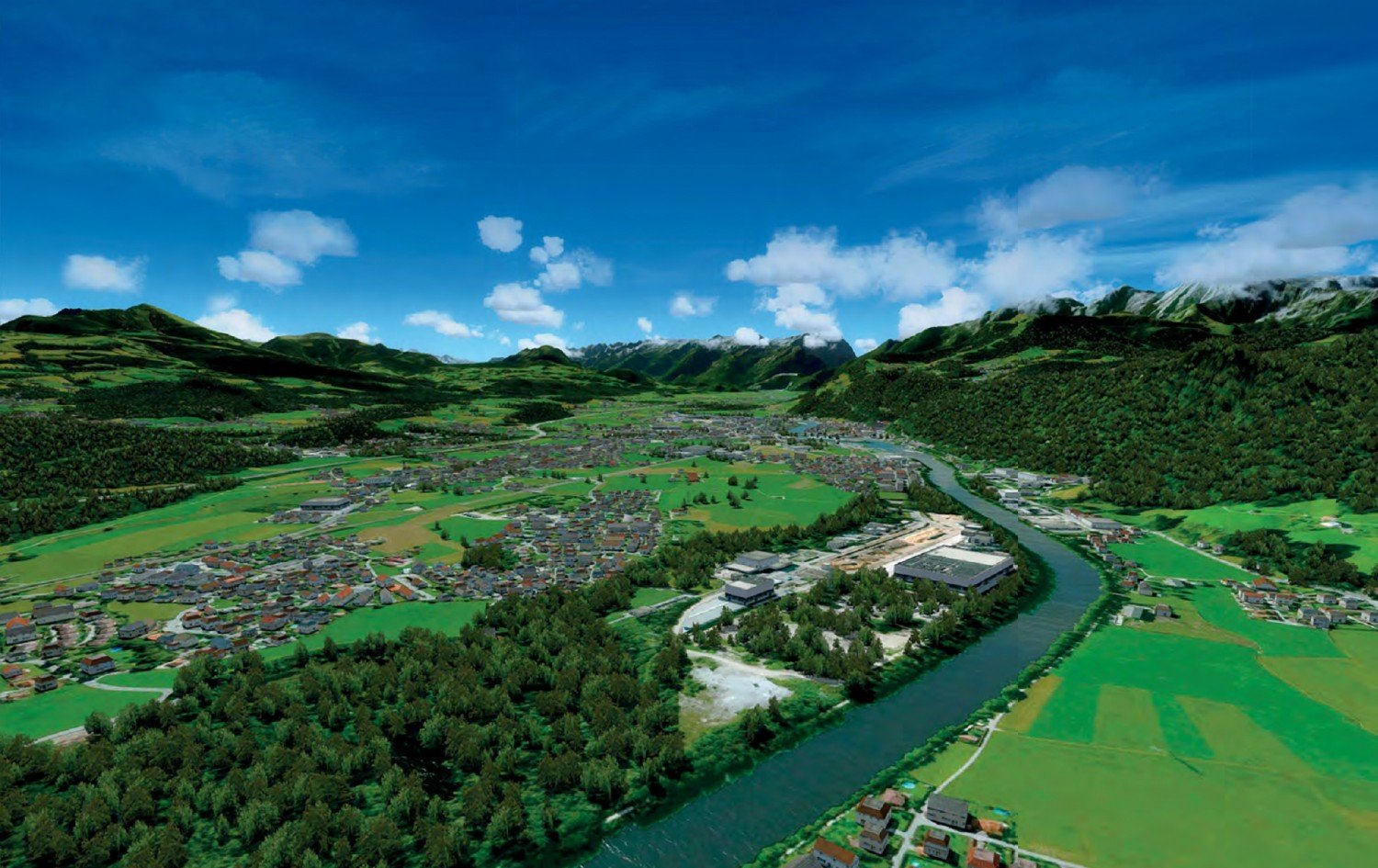 You can track along the Salzach River for miles.

It’s been seven years since I reviewed Aerosoft’s original Austria Pro package, which as I recall was about as far removed from the default scenery as you could get. So I was surprised to hear that a new version was being worked on although I appreciate that as time moves on, so does the resolution of the imagery these products are based on.

This time the developer Flugwerk Design has split the country into two parts, east and west, which is not surprising when you realise the size of the files you have to download. In the case of the West package depicted here it is 13GB, perhaps a good reason to get the DVD version.

Approaching Innsbruck in the PA-46 Malibu.

Covering a vast area from Bregenz (LOIH) in the West, to Salzburg (LOWS) in the east, the package includes all the airports and airfields within the Austrian borders. You’ll find that some of these are enhanced with a few extra buildings, but for the most part they are just the default structures. Having said that the major airports such as Innsbruck and Salzburg are subtly different from the default versions. Yes they have a few more buildings but these are not the same and are arranged to more closely resemble the real ones. Personally, I think it’s the overall environment they’re set in that makes the difference, rather than any major remodelling but it’s still worth a mention.

The scenery is built on an elevation model at a geometric resolution of roughly 5m, which is covered with a blanket of custom textures based on aerial imagery, at a resolution of roughly 1m per pixel. On top of this is the autogen vegetation and buildings, many of which are new and custom designed objects. They include castles, churches, transmitter towers and power stations. I noticed that the Kolnbrein Dam (the largest dam in the world) was depicted but only in terms of the elevation model; sadly there’s no actual structure there. 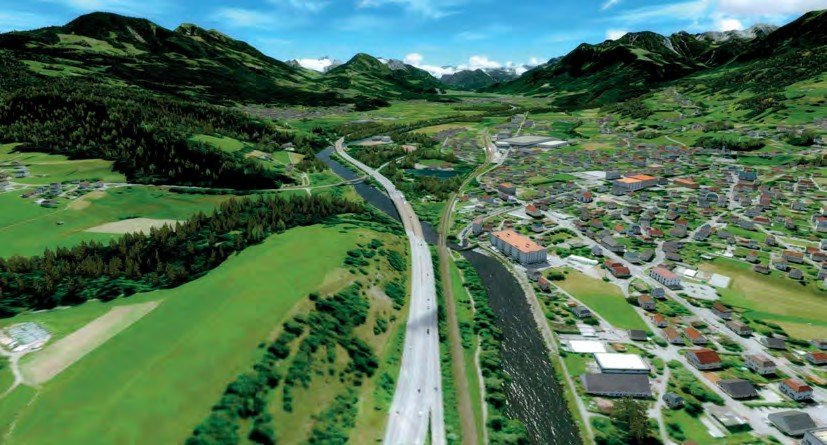 The much higher resolution tiles mean that even at low level the perception is of an authentic landscape.

On the other hand flying around Salzburg is brilliant. If you take-off from Runway 33 and circle back to the right to fly over the city, you’ll see many of the custom buildings on offer. The most prominent of these is the Hohensalzburg Castle, set on a hilltop and almost impossible to miss. It’s a massive 11th century fortress complex that has a world famous silhouette. Just below that is St Peter’s Abbey with its unmistakable Baroque-style copper clad twin spires.

Flying on past the city you can track along the Salzach river, which is 225km long and passes through some really beautiful countryside, with towns, villages and small hamlets sprinkled all along its banks. The river tracks northwards creating a natural border between Austria and Germany, so you can’t travel too far or you’ll cross back into the default scenery, yet I must say the developers have been kind to us here and extended the scenery a few miles across the border.

At the moment the product only includes summer textures, so you won’t see any seasonal changes in winter or autumn. At the time of writing this article it wasn’t clear whether the developers would be offering these at a later date; I imagine it will depend on time-scale and demand.

A comparison between Austria Pro HD and the default scenery for Salzburg Airport.

The realism is enhanced by the (subtle) addition of trees and shrubs lining many of the roads and rivers throughout the scenery. Also the fields and towns are not composed of generic tiles (which are admittedly better than they used to be) but are custom-designed to portray a landscape that looks right wherever you look. You won’t see irregular shaped scenery tiles that obviously don’t belong where they’re placed or roads that suddenly stop or change direction at a ridiculous angle.

Of course there are irregular shaped fields but these are bordered by roads that follow the contours correctly and are present in the real world. So if a lane or minor road crosses a field, it looks as though it belongs there. You’ll also see that where a road passes through a small hill the developers have cut a path through, not simply pasted it up and over. 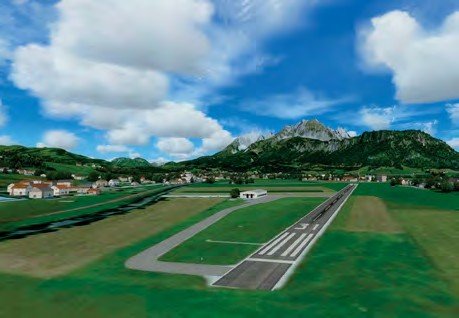 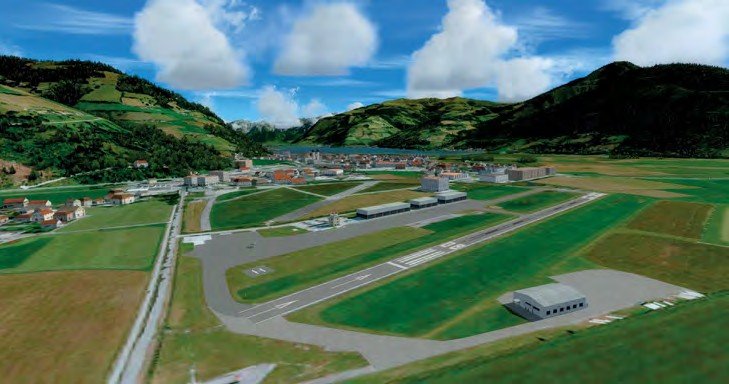 Two of the airfields to be found in Austria Pro HD West. 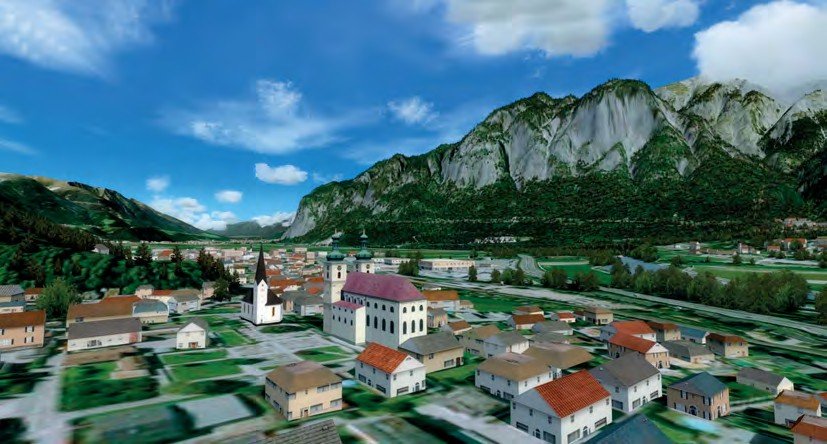 St Peter’s Abbey is another of the custom buildings you can find in Salzburg.

The towns and villages comprise thousands of buildings and naturally there will be some repetition, yet what you won’t see are buildings spanning across roads or placed where they obviously shouldn’t be. In fact if you look closely you’ll see that the houses all have their own space, with little gardens and shrubbery that complement them; I can’t imagine how long it took to create such a landscape, particularly to such a degree of realism. It’s only when you get down to about 200ft that you realise you’re looking at digital imagery. Nevertheless, the effect is stunning and for VFR flying it’s fantastic.

Climbing higher into the mountains from one of the smaller fields is quite an experience where at every turn you’ll find a photo opportunity. In fact it’s easy to get carried away admiring the view and just keep flying, but eventually the ugliness that is the default scenery creeps up on you, so it’s a quick about-turn to get back into the much greater reality that this package provides.

I should add that there are bound to be some little errors that I’ve missed or perhaps places that I didn’t visit so my comments are not a challenge for you to find any such errors, it’s just me trying to impress how much work has gone into the production of Austria Pro HD.

There are not many products that we review which don’t have some impact on performance, an issue that’s become all encompassing for some flight simmers. Personally, if I get a product that has a significant effect, I simply dial down the settings until it becomes an acceptable compromise.

In the case of the Austria Pro HD products, they are to some extent simply replacement textures. Of course higher resolution means larger file sizes, which can mean longer loading times, resulting in a time lag in displaying them. Yet at no time did I get this problem - I set my system to a level that gave me the best performance without sacrificing the visuals. I don’t see any point in running through all my settings because we all use different hardware; I have however listed the components in my system at the start of this feature.

I mainly flew the superb Carenado A36 Bonanza, yet you might notice images of the latest PA-46 Malibu Meridian, also reviewed in this issue. I flew the Malibu because it’s a more complex aircraft and consequently takes a higher toll on performance. Yet even flying this aircraft I got between 40-60 frames per second during fairly low level flight, only dropping below 40 on final approach into Innsbruck. This incidentally was with my frame rate target set to unlimited.

The package includes a full colour manual in PDF format, explaining something about the product, but mainly covering the installation. It does however contain a few pointers on compatibility and instructions for users of other scenery products that might create a conflict.

As you’ve no doubt gathered I was very impressed with Austria Pro West HD and enjoyed reviewing it immensely. It’s a huge step up from the default scenery and quite an improvement on the original product as well. Of course the higher resolution imagery has played a pivotal roll in achieving this level of detail along with a dedicated team of developers, who have obviously spent many long hours hand-crafting the placement of the thousands of objects that litter the landscape.

If you fly high and fast you won’t really appreciate the reality that this product can provide, yet at some point you’ll need to land and then the approach will amaze you. The much higher resolution tiles mean that even at low level the perception is of an authentic landscape, and it’s only at about 200ft that the photographic textures become apparent.

If on the other hand you fly low and slow, Austria Pro is a delight and for me is a must-have product.

At a glance: A stunning scenery product from Flugwerk Design, getting us closer to reality in more ways than one.