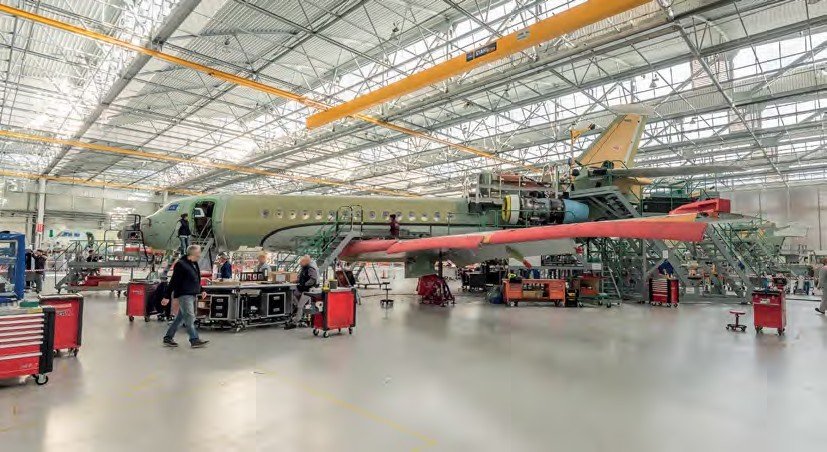 Falcon 8X c/n 464 in one of the production line assembly stations.
All images Jan Kraak

THE FALCON 8X is the largest business jet available from Dassault Aviation. According to its French manufacturer, the 8X has the aviation industry’s most comfortable and quiet cabin, with a choice of 30 distinct layouts for customers to choose from.

The 8X is referred to as the flagship of today’s Falcon family, an extra-large version of the wellknown Falcon 7X.

However, it undervalues Dassault’s team of engineers simply to call the 8X a supersized 7X; the aircraft has redesigned wings with more movable surfaces for better manoeuvrability, and redesigned winglets to further reduce drag, resulting in greater fuel savings. Also, Falcon 8X has a new-generation fly-by-wire digital flight control system and an updated version of the EASy flight deck featuring the latest Honeywell weather radar system with enhanced turbulence detection.

Dassault’s flagship can fly at Mach 0.9 and is certified to an altitude of 51,000ft. Even though the 8X can fly non-stop from Paris to Buenos Aires, it can land on short runways and therefore operate out of airports such as London City, for which it was certified last year.

Better handling at lower approach speeds (the 8X can land as low as 107kts) and shorter takeoffs, ideal for smaller airfields, a performance factor made possible by three Pratt & Whitney Canada PW307D engines each rated at 6,722lb (29.9kN).

Dassault claims that Falcon 8X operating costs are up to 35% lower than the operating costs of comparable private jets. Furthermore, its streamlined MSG-3 maintenance programme allows for 800 hours or 12 months between each major aircraft inspection.

Capable of carrying up to eight passengers and three crew, the type received its European Aviation Safety Agency EASA) and Federal Aviation Administration (FAA) certifications in June 2016 and the very first 8X was delivered to its customer in October of the same year; 65 aircraft had been assembled on the production line in Dassault’s plant at Bordeaux- Mérignac airport by January 2019.

A unique aspect of the Falcon 8X is the FalconEye enhanced flight vision system (EFVS), which was approved by the EASA and the FAA in the first quarter of 2017. FalconEye is the first head-up display (HUD) to merge database-driven terrain mapping with actual images from built-in thermal and low-light cameras.

The resulting increased situational awareness for the pilot allows the Falcon 8X to operate in almost any type of weather condition, day and night; and since October 2018, the 8X is certified to descend down to 100ft in bad weather. FalconEye is the continuation of Dassault’s development of HUD systems; in 1993, the Falcon 2000 was the first business jet in the world to be equipped with a HUD, allowing the pilot to fly manually an approach to airports with the most difficult landing conditions.

More recently, the Falcon 7X was the first business jet to be installed with a LCD HUD. According to a Dassault press release from October 12, 2018, the manufacturer planned to have the 100ft certification for its FalconEye on its Falcon 2000LX and Falcon 900LX jets by the end of 2018. Dassault will continue to develop FalconEye and plans to receive certification for a dual HUD system, which will allow the pilot to perform the entire approach with EFVS imagery only, for the Falcon 8X by 2020.

Dassault’s Falcon family has undergone changes in the last 18 months. In December 2017, the French aerospace company cancelled its unsuccessful Falcon 5X programme after ongoing engine issues, which forced repeated delays to its planned in service date. This cancellation was followed in February 2018 by the announcement of the Falcon 6X, which is currently being developed; planned first flight is for 2021. Dassault enjoyed a slight increase in the number of Falcons sold last year, with 42 orders compared to 38 in 2017. At the end of 2018, all commitments for the now cancelled 5X had been transferred to the Falcon 6X, and as of December 31, 2018, Dassault’s order backlog amounted to 53 Falcon jets comprising an undisclosed mix of Falcon 6X, 7X, 8X, 900LX and 2000LXS models. 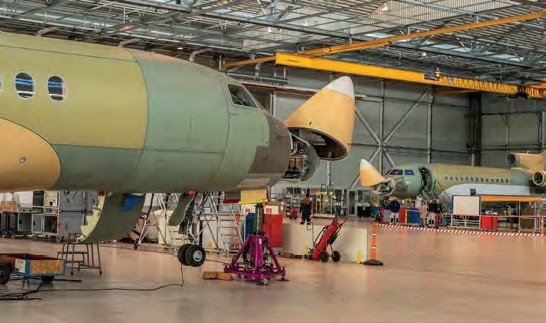 A Falcon 8X undergoing tests in the foreground with a Falcon 7X in the background. 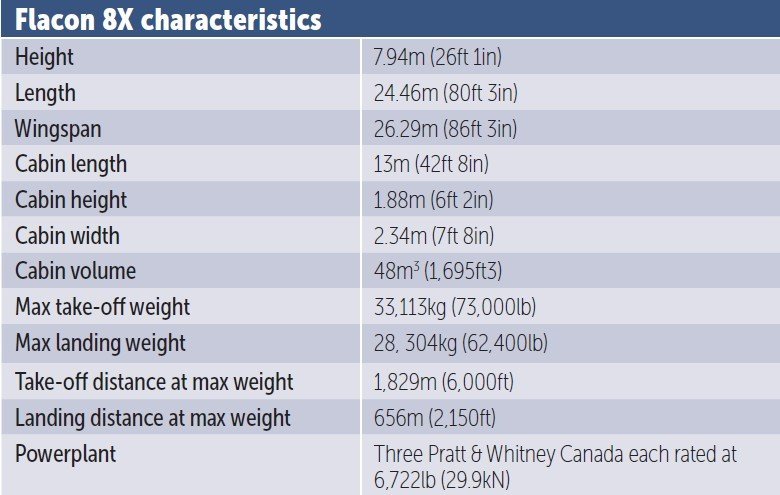