The Microsoft development team has released Episode 3 (AERODYNAMICS) in the Feature Discovery Series. 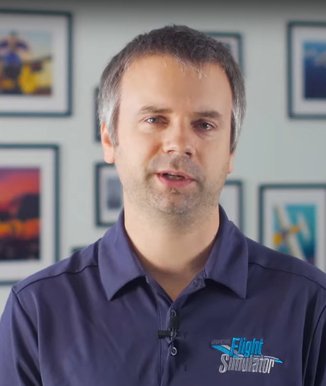 The collision model is much improved and aircraft now interact with different surfaces, so they can land on sloped runways as well as on fields and mountain slopes.

The aircraft friction model was rewritten to work correctly on sloped surfaces. Tyres are now accurately simulated with dynamic and static friction, so rubber now behaves correctly on surfaces such as tarmac, grass, gravel etc. and tyres will skid like in the real world.

The simulation runs at much higher and smoother frame rates and adapts to the refresh rate of the monitor so there you don’t lose performance.

The aircraft no longer feel like they are on rails and they behave more like they do in real life. The inertia model is also rewritten so roll, yaw and pitch movement feels much more realistic. 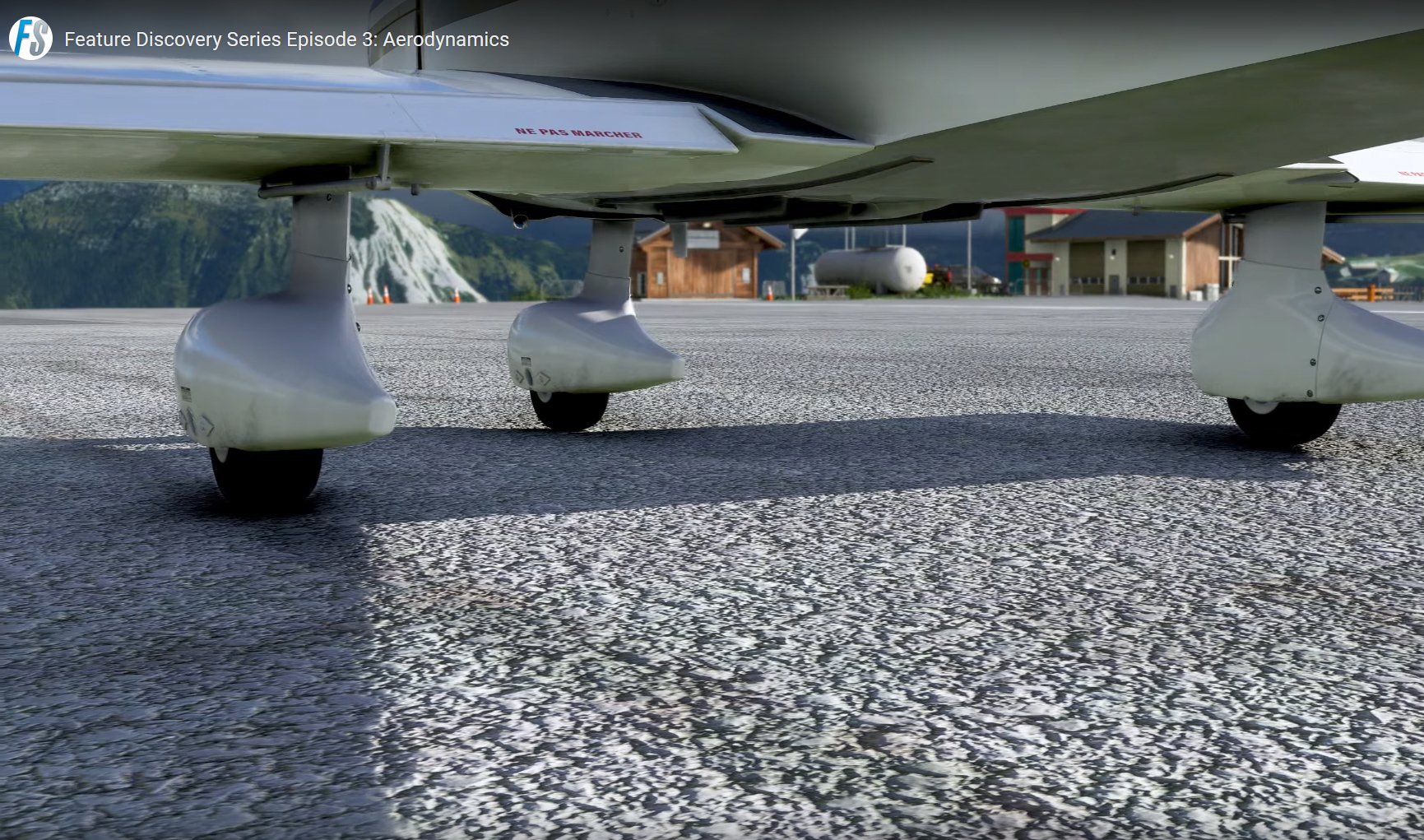 Rewriting of the core aircraft systems

The aircraft systems have been improved, for example, the turn coordinator behaves much more realistically and the specific fuel consumption now varies with altitude so is now more accurate.

There is more control over the way flaps can be set while the external tanks and the gear is simulated aerodynamically like the aircraft. A new icing model is simulated more realistically so when you fly through clouds in the right conditions, the airframe and windscreen will accumulate ice.

The legacy code from FSX is still available so you can switch to the legacy simulator. Finally, Sebastian explained that all the default aircraft have been tested by professional pilots or test pilots who have flown the real aircraft, so they don’t just match the performance parameters, but also fly like the real example. 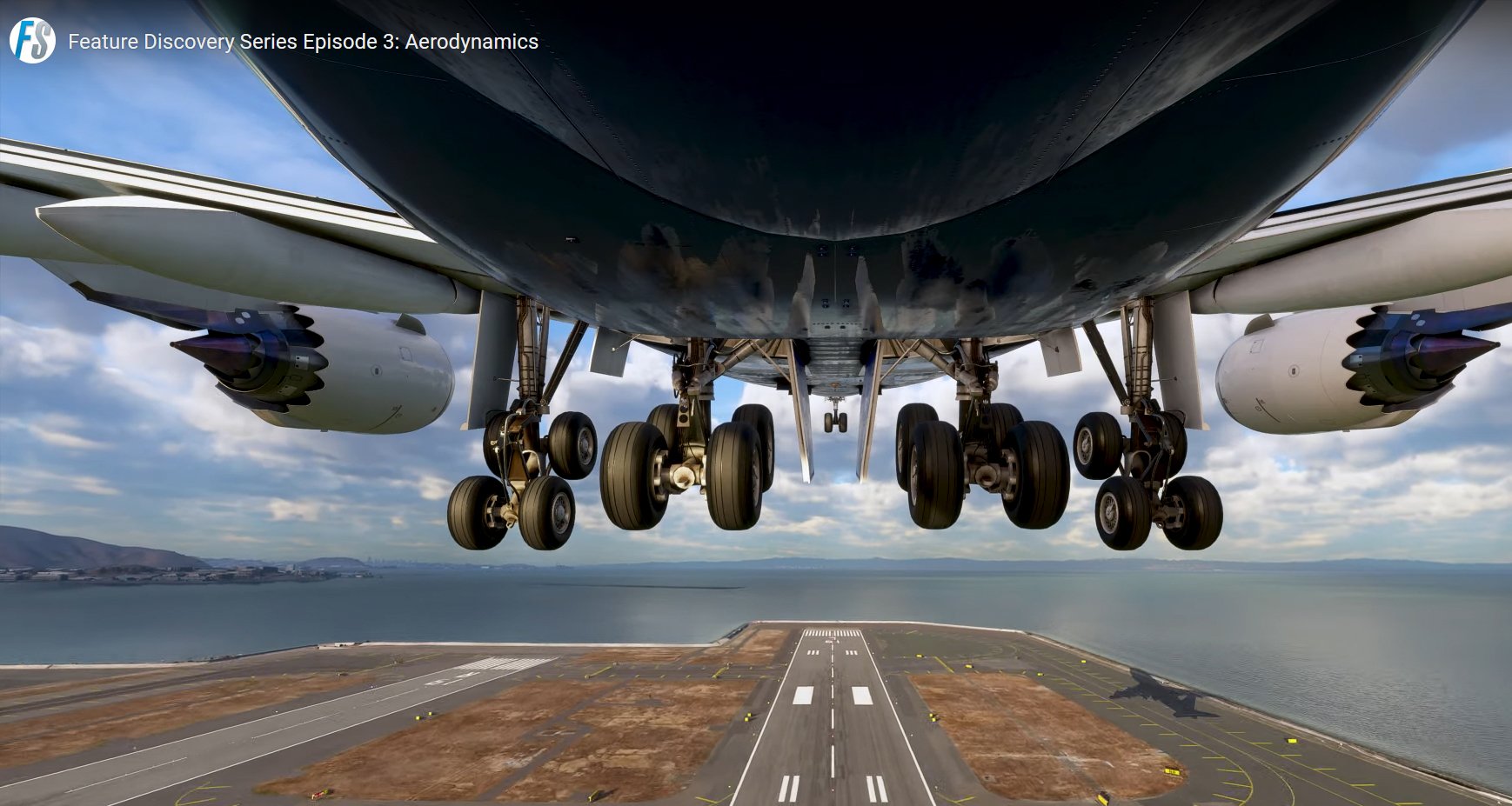 The aerodynamic simulation has received a significant rework. An aircraft is divided into thousands of simulated surfaces. Each surface interacts individually with the atmosphere, so it has its own air pressure, speed moment and temperature, so it has its own airflow simulation. It will realistically simulate a stall, surface by surface. For example, the left wing can be stalled while the right one is still flying. So aerobatics, chandelle, flap spins, inverted flat spins etc. are now possible.

The airmass for the entire planet is simulated globally, so every area of the world has its own 3D simulation. Volumetric clouds will feature realistic turbulence, up/downdrafts. For example, towering cumulus now has accurate wind modelling both inside the cell and around it so we can experience wind shear and turbulence. 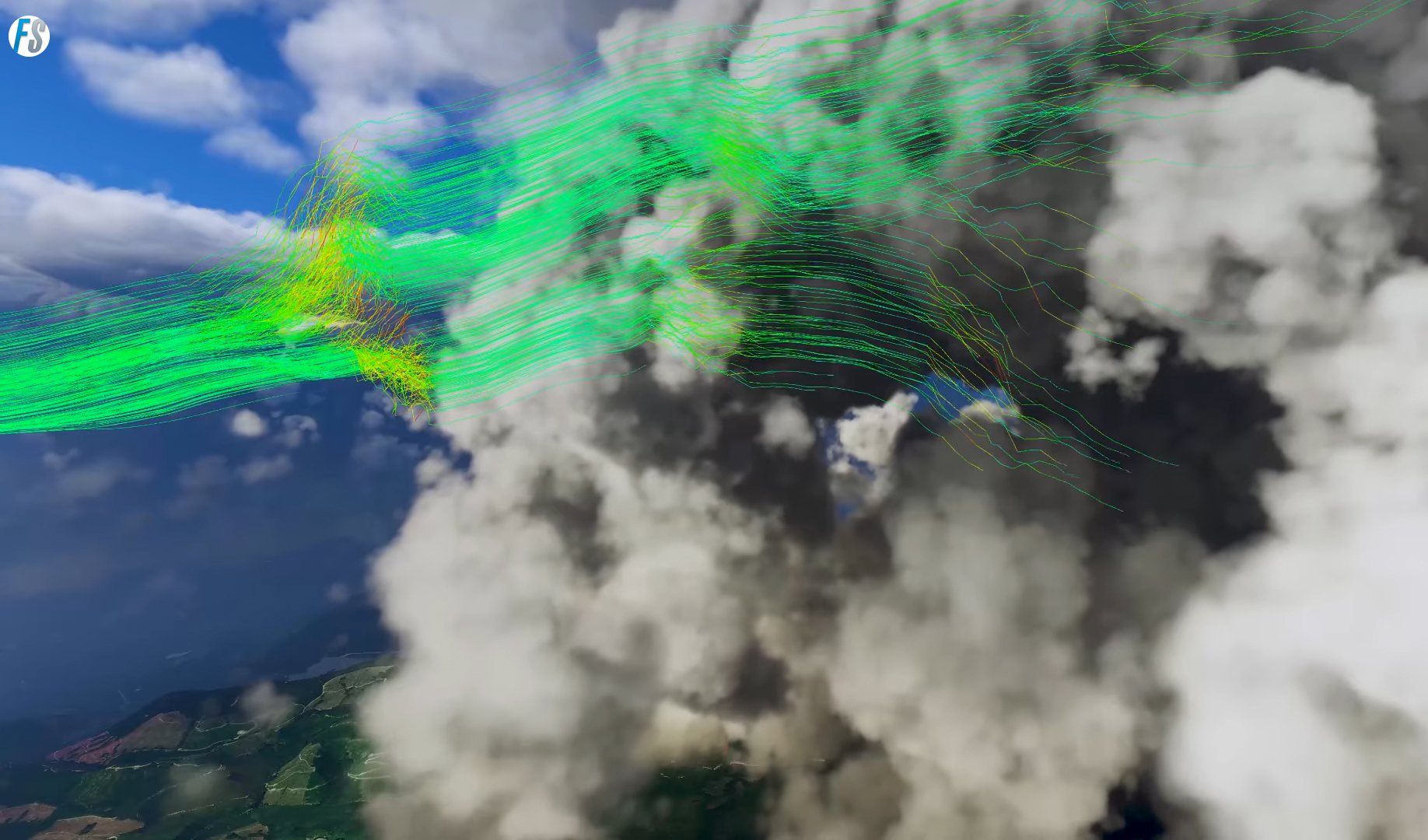 3D shapes such as buildings, mountains, forests, valleys etc. will impact the movement of air with the associated up/downdrafts and turbulence. 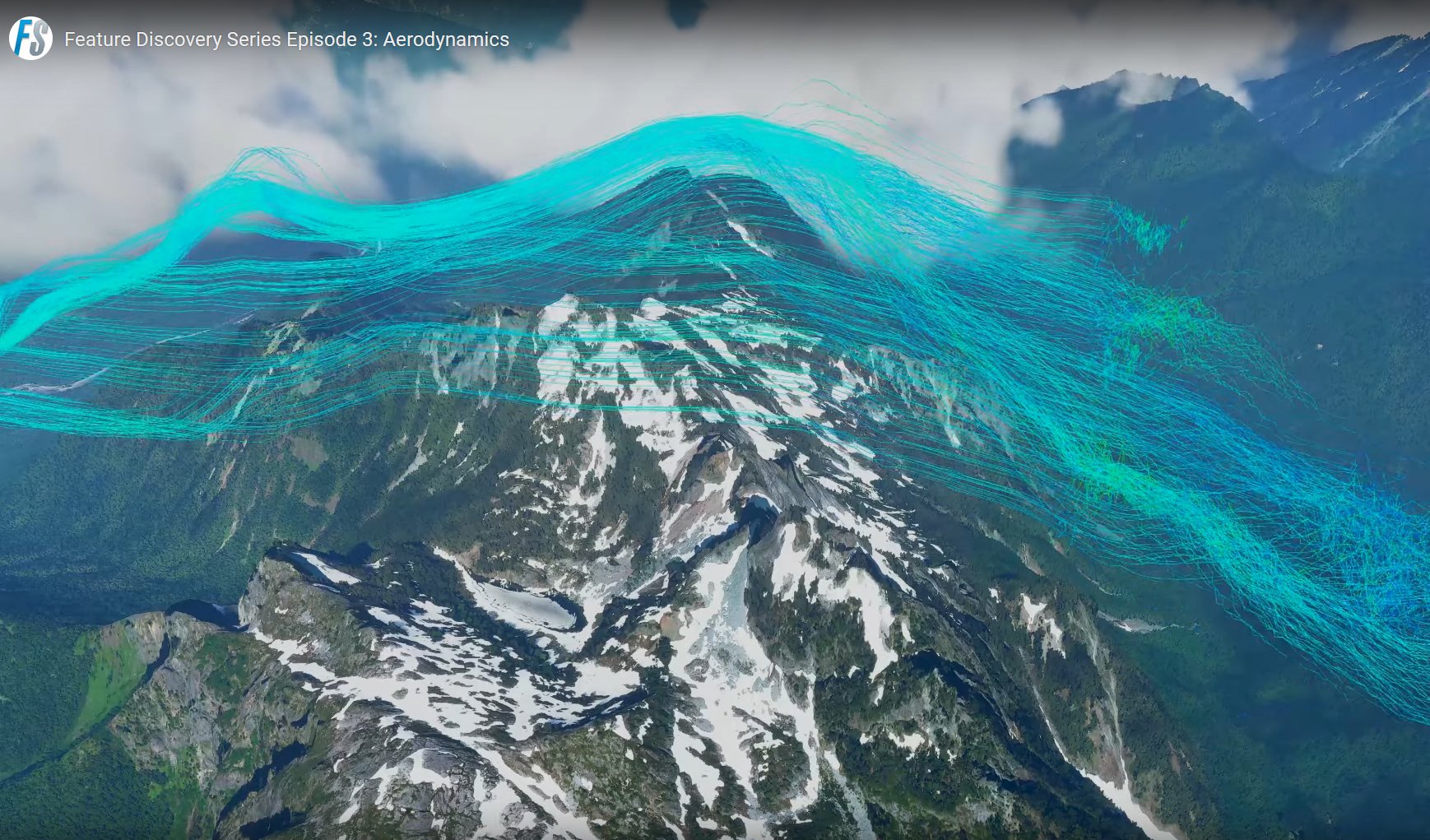 The team explained they are making good progress on SDK development. While still in the early stages, the plan is to provide an initial version of the SDK to the third-party developer community before the end of the year. Their goal has been to involve third parties early in the development process and to give them the ability to influence priorities in how the SDK is authored.
The SDK will be provided to the community to create content such as aircraft, scenery and custom missions. For those with a preference for using FSX tools, SimConnect will be supported along with modern standards such as HTML for UI and glTF for 3D models.

December/January preview for the development roadmap. 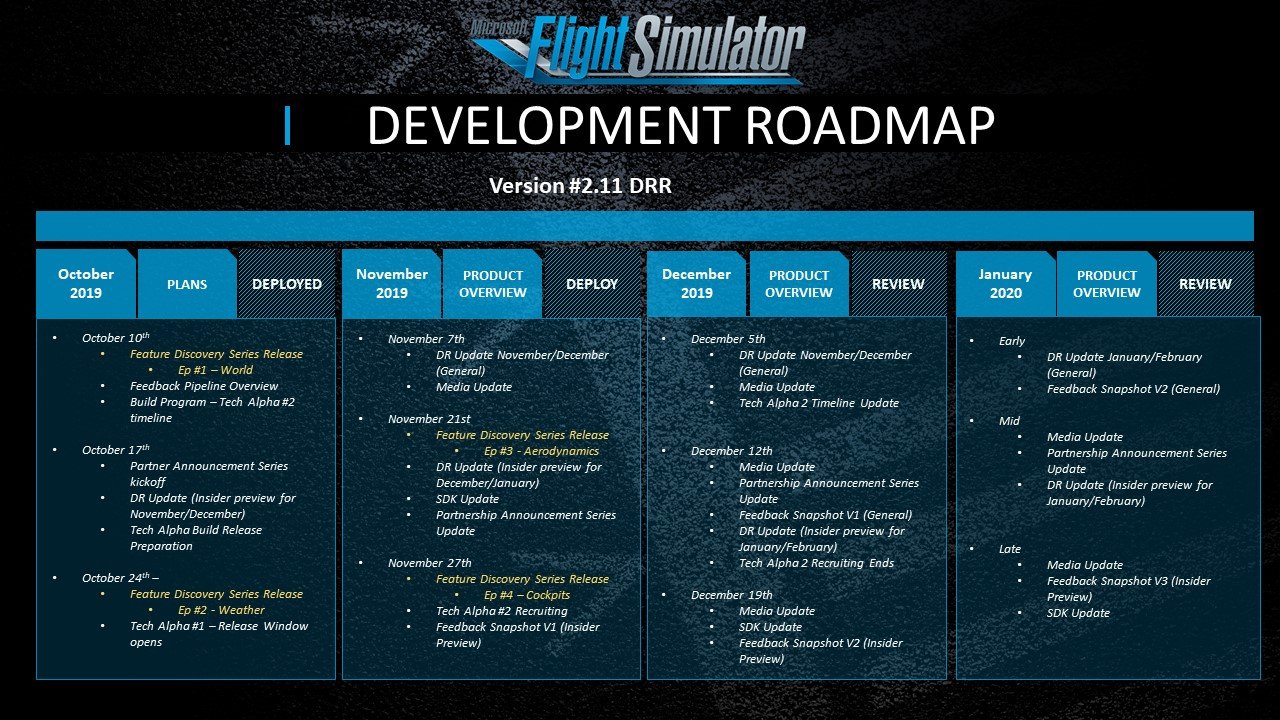