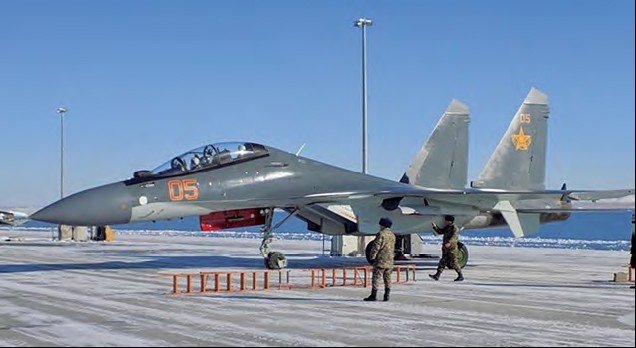 Kazakhstan Air Defence Force Su-30SM 05 at the 604th Air Base at Taldi-Kurgan after its delivery flight from Russia.
Kazahstan Ministry of Defence

Elsewhere, the Kazakhstan MoD announced delivery of two Su-30SM Flankers with side numbers 05 and 06, the first to be received from a seven aircraft contract signed in late 2015. Side number 01 to 04 were delivered in April in 2015. Deliveries of the remaining five will be completed by early 2018. The Kazakhstan MoD foresees procurement of up to 36 Su-30SMs by 2020. The Kazakhstan Air Defence Force operates its Su-30SMs at the 604th Air Base at Taldi-Kurgan.

Kazakhstan was not the only foreign air arm to receive Flankers during the closing days of 2016. Eight Su-30MKAs (sometimes referred to as the Su-30MKI(A) model) arrived in Algeria on four flights by An-124 Ruslans operated by Russian air cargo carrier Volga-Dnepr.

The first Algerian Su-30MKA made its first flight at the factory airfield of the Irkutsk Aviation Plant on November 10, 2016. Six more aircraft from an April 2015 order are expected to be delivered in 2017. The Algerian Air Force already operates 44 Flankers; 28 were delivered between 2007 and 2009 followed by a second batch between 2011 and 2012.