The Future is Now

Ian Frain reports on the FCX001, a futuristic looking concept from Bell Helicopter 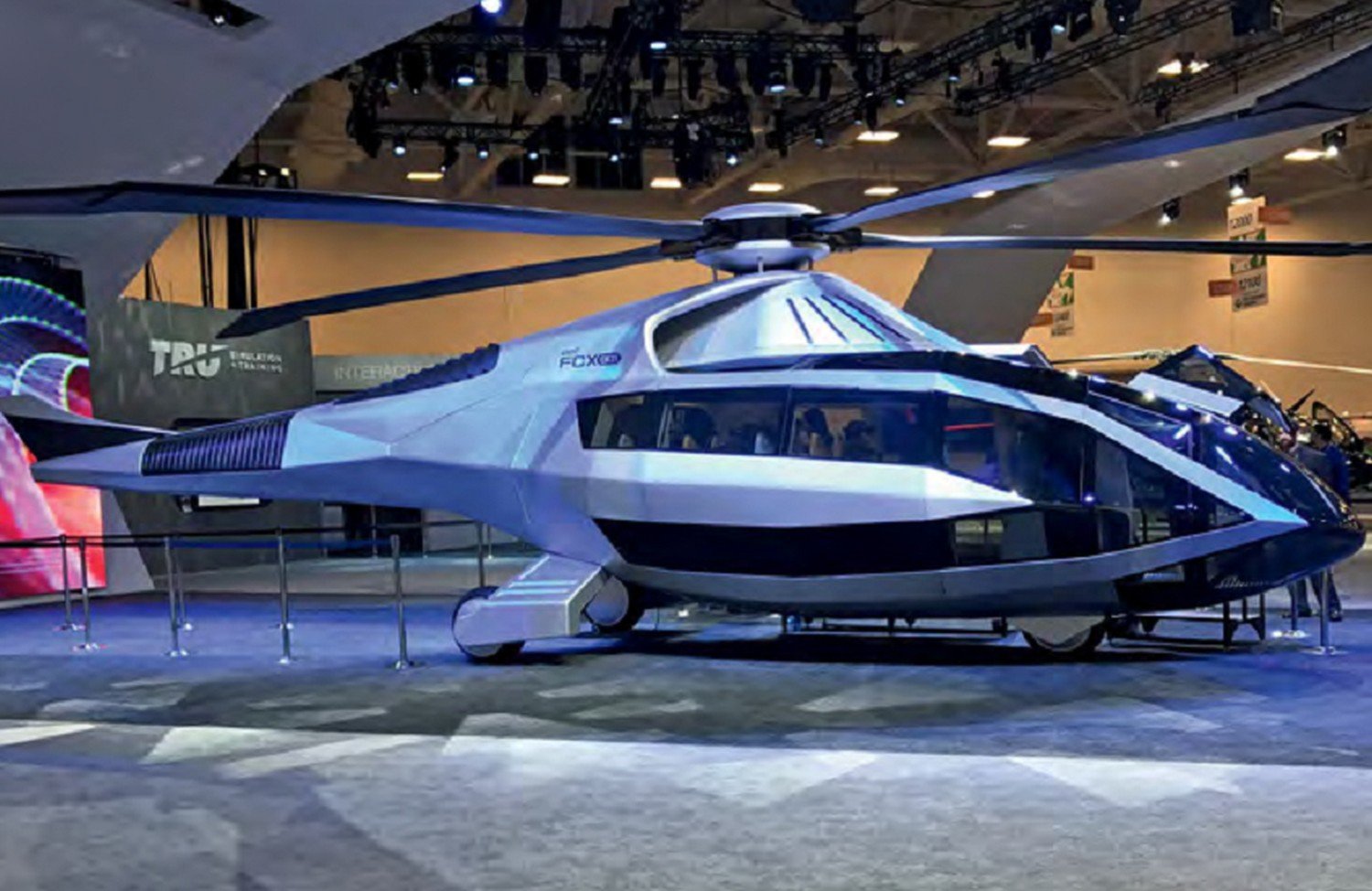 A side view of the FCX001 concept mock up Bell Helicopter presented at Heli- Expo 2017.
All photos Ian Frain unless stated

In March 2017, at the annual Helicopter Association International’s Heli-Expo in Dallas, Bell Helicopter revealed its innovative and futuristic concept mock-up of the FCX001.First impressions are of something out of the realms of science fiction, but closer inspection shows that nothing could be further from the truth.

The FCX001 has several innovative features that give it a true 21st-century feel, starting with the aesthetic sleek and futuristic design inspired and influenced, at least in part, by current trends in the automotive industry.

Aerospace manufacturing has naturally evolved over the past century, especially in the last three decades. The development of lighter, more durable materials has led to greater structural integrity, which has had a beneficial impact on the safety of airframes. The key aspect of this concept is system and energy management, achieved by and large through the use of advanced sustainable materials.

The traditional landing gear has always been skids, either fixed or as a retractable undercarriage. There is an important design aesthetic to this gear, but Bell is exploring how non-traditional geometries, including wheels, tyres and support structures, can better facilitate function of use when combined with advanced materials; for example, actuation can improve manoeuvrability and absorb landing energy, increasing both safety and comfort in ground operations.

The hybridised propulsion system combines the advanced thermal core and subsequent electric distribution with the motors to drive the anti-torque system. Taking away the conventional tail rotor enhances safety, performance and noise reduction in the form of the new advanced anti-torque concept. Thus the system is built into the tail boom, providing thrust-vectoring capability. 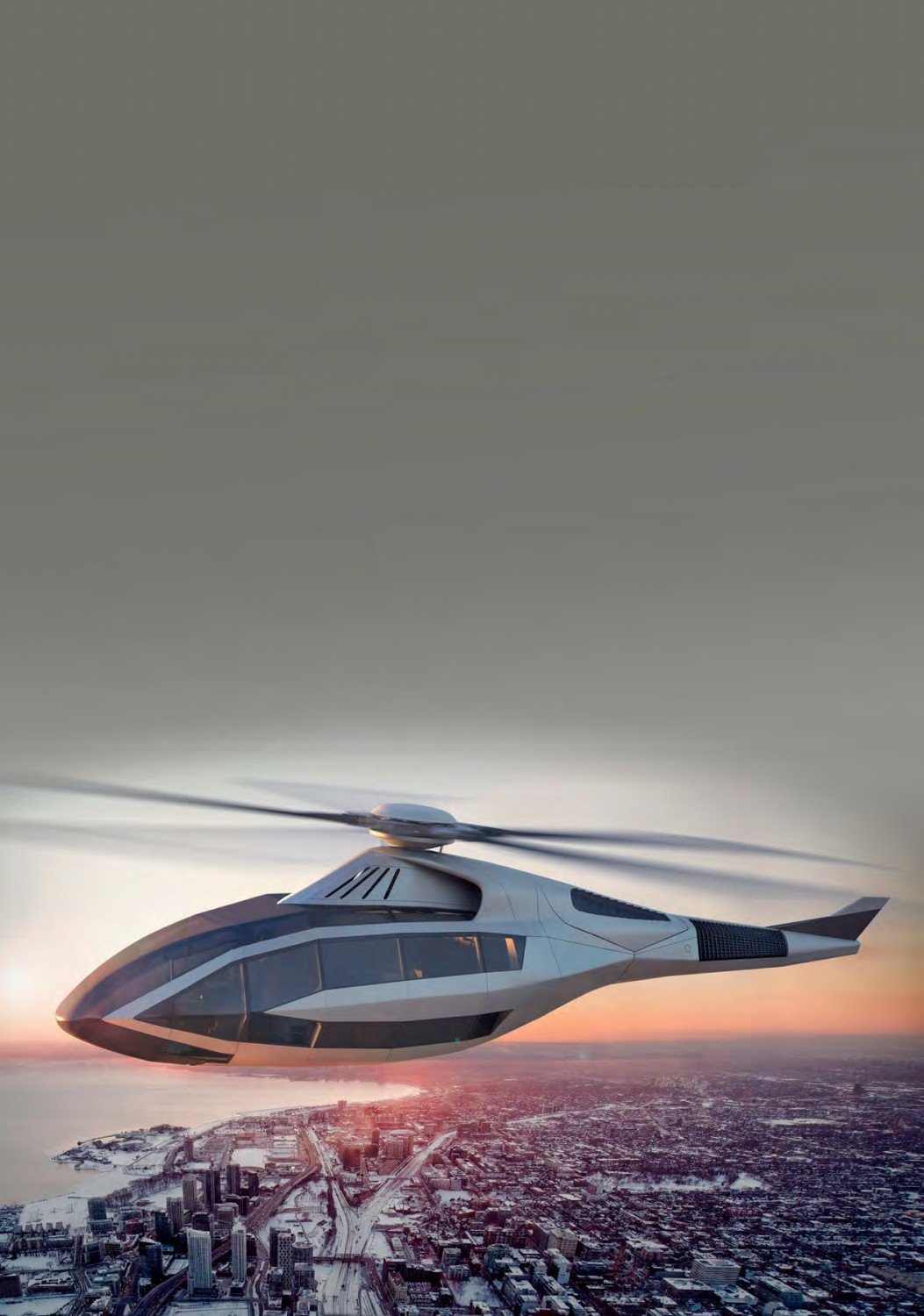 The FCX001 concept is for a very sleek and futuristic design, as seen here in this artist’s impression.
Bell Helicopter 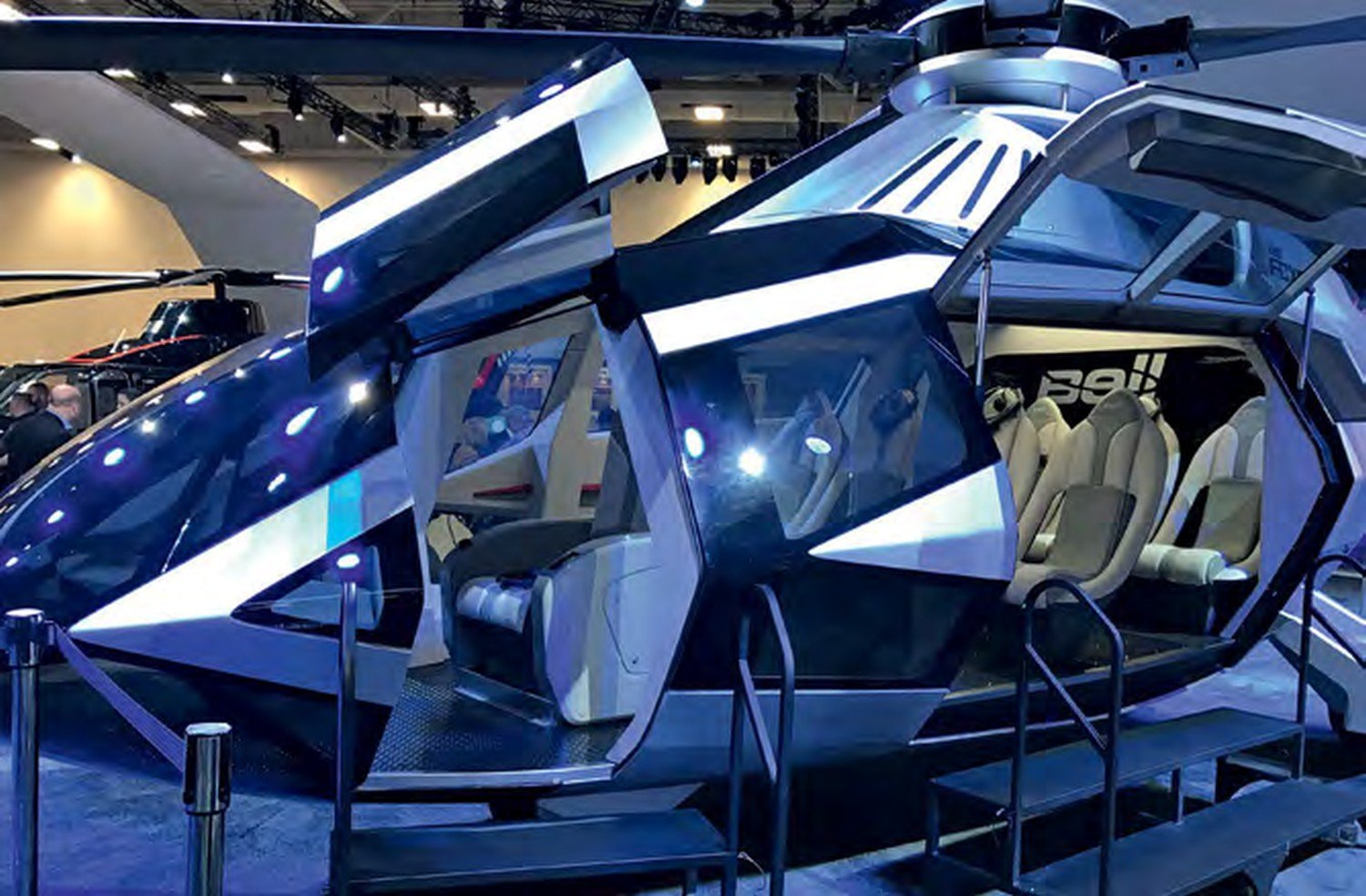 Note how the FCX001’s concept does not have an instrument panel – instead the single pilot will virtual reality glasses. 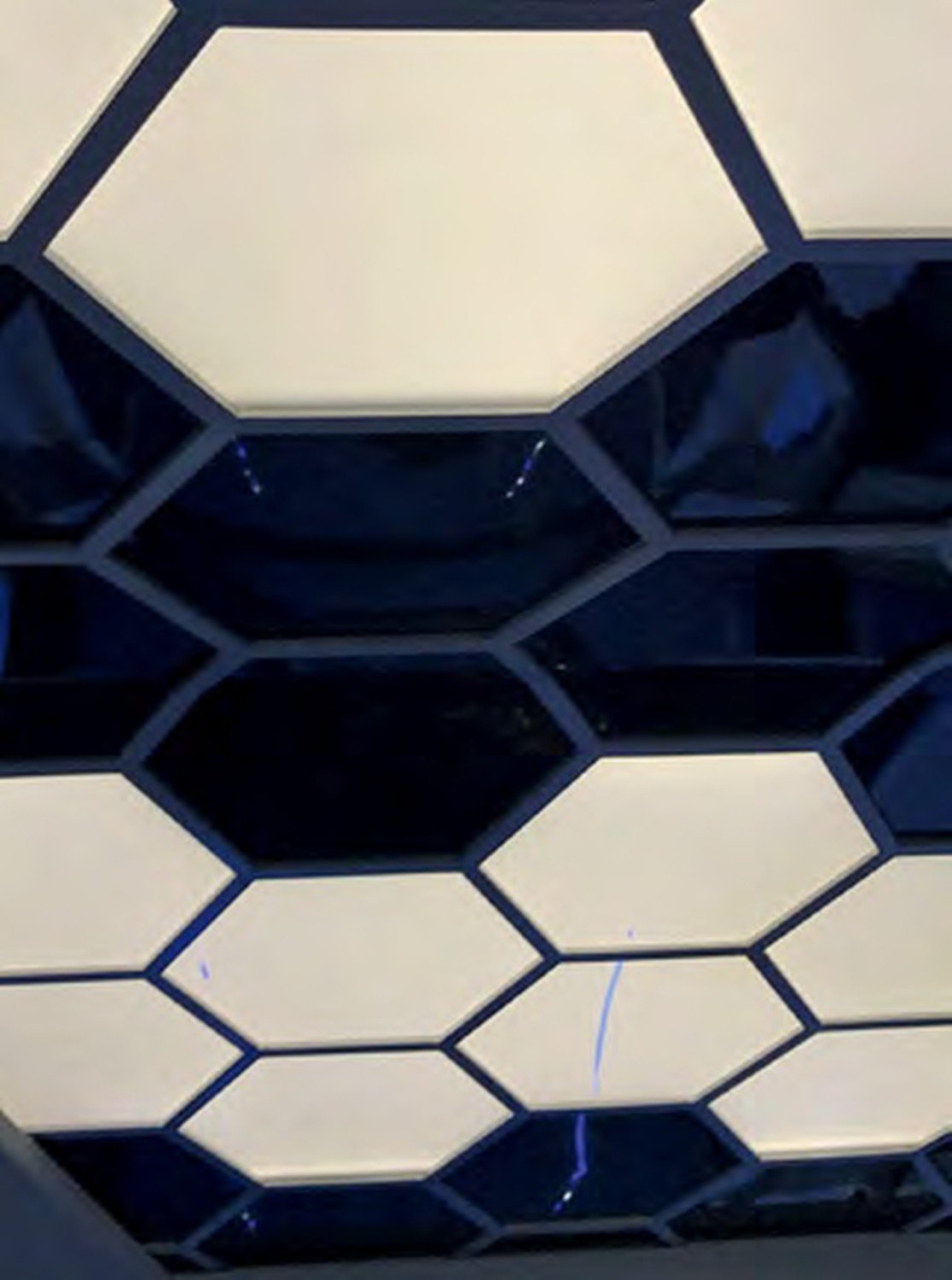 Unique interior lighting has the ability to adjust as well as change colours.

The performance of any helicopter lies with the length of the rotor blades; the shorter the blades, the less drag, which subsequently leads to increased speed. A large rotor is more useful for carrying heavy underslung loads.

Certain issues must be overcome to create the perfect morphing blade, such as the need for big actuators to pull the blades in, as there are huge centrifugal forces present. However, Bell has managed to address the issue of geometry in the Bell V-22 Osprey where, in developing the tilt rotor, it has one geometry for the helicopter mode and one for the forward fixed-wing flight.

The main rotor blades on the FCX001 have morphing structural geometry, in effect solving some of the above issues and helping to optimise performance in different flight conditions. The solutions lie with the blades, actuation, aerodynamic surfaces and the use of smart materials.

A Virtual and Novel Way to Fly

The cockpit has changed and advanced over the last century from the most basic and simple of dials, from mechanical to analogue, and then to digital all-glass fly-bywire. Tomorrow’s cockpits will be virtual, and with the FCX001 there is no instrumentation and no multifunction displays on the flight deck. Instead, there will be a single pilot responsible for all operations with everything fed into virtual reality (VR) glasses wrapped around the head.

This augmented reality will be possible because of an artificially intelligent computer assistance system. While that might sound farfetched, it is not really so distant from the reality of today’s fly-by wire system and unmanned aerial systems (UAS) and optionally piloted vehicles. The human pilot is now, and will always remain, an important part of the chain in UAS operations, moving into the role of the mission commander.

The VR concept demonstrated at Heli-Expo utilises today’s available VR technology, which is already being widely used by the gaming community and is filtering into many other technologies. The VR experience is applicable not only to the pilot, but also the passengers in terms of selecting views, different forms of entertainment (as with in-flight entertainment) or using available business tools, word processing, spreadsheets, presentations and so on.

There are three separate and independent flight control computers at the heart of the fly-by-wire system. As with any other modern system, the FCX001 responds to the digital input commands from the pilots and flies as commanded. 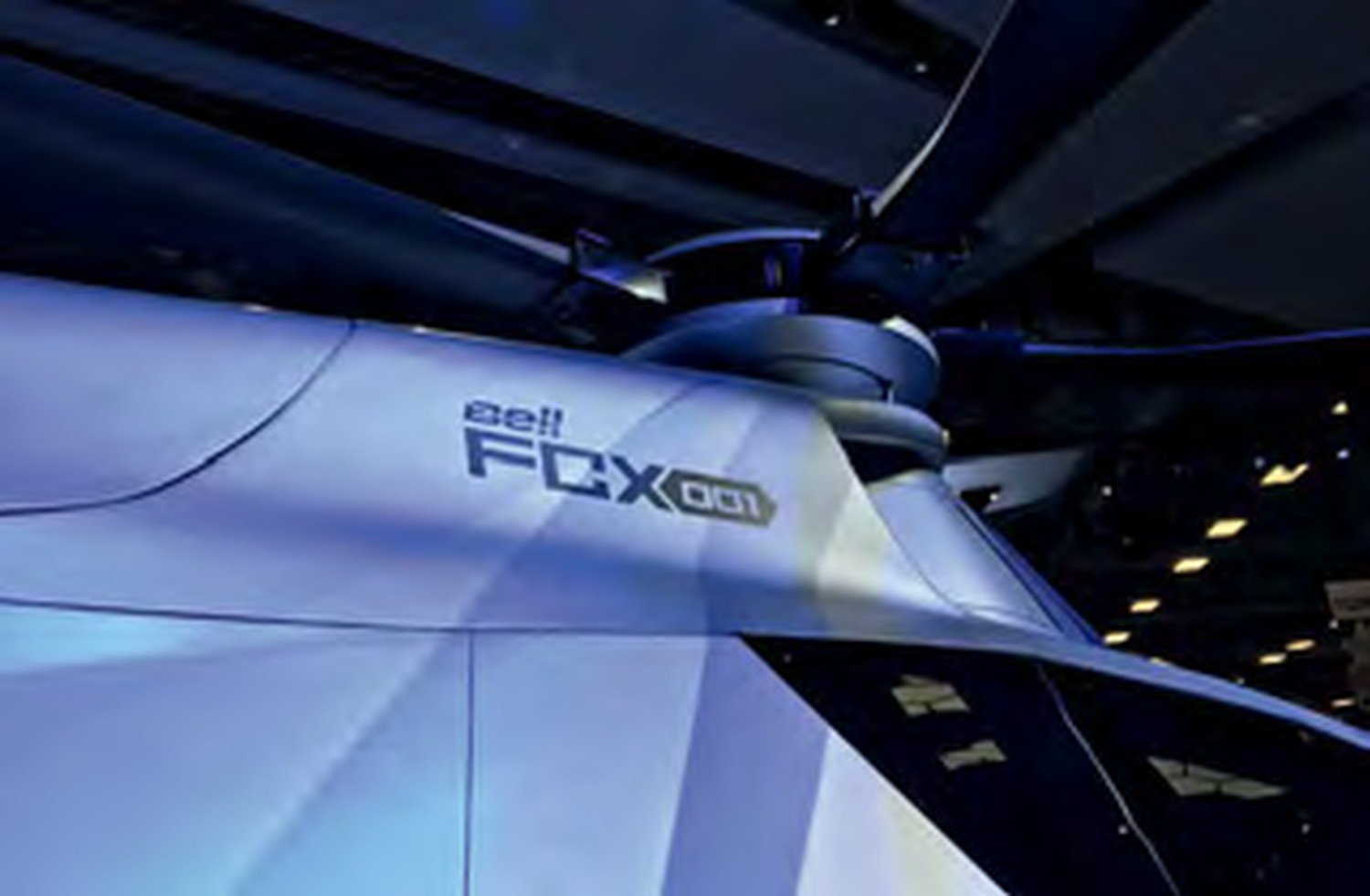 Modern helicopter cabin design is always flexible, so any number of configurations can be used. In the case of the FCX001, there is a modular flooring system concept, which allows a great deal of choice in respect of the seating layout. It could also easily be customised for any mission required, such as for utility/cargo missions.

The interior lighting also gives a futuristic feel, like being inside a spaceship from a big-budget science fiction film, with the panel lighting positioned above. The lighting can be adjusted and a different colour is available depending on the customer’s or passenger’s request. Comfort is of paramount concern. There are overhead ventilation systems akin to the best in world-class airlines, and in this case 360o pop-down air ventilation.

In 2012 and 2014, Bell unveiled the new generation of its product line with the Bell 525 Relentless medium twin engine fly-by-wire multimission helicopter and then the Bell 505 Jet Ranger X. The latter is designed and built to continue the legacy of the successful Bell 206 Jet Ranger, which reaches its fifth decade this year.

Both have unique aesthetic and sleek airframe structures and interiors that are unlike previous generations of rotorcraft. They truly reflect the 21st century. Likewise, the FCX001 concept is what the helicopter of the future can and will do.