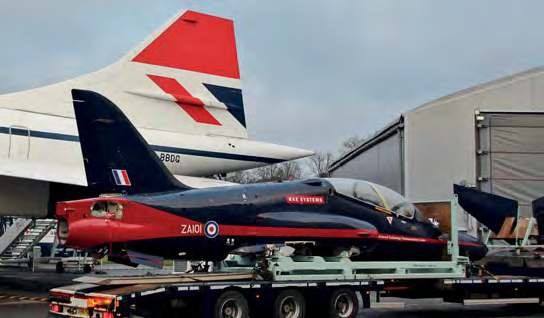 Hawk ZA101 after its arrival at the Brooklands Museum from Samlesbury, Lancashire on 23 January, wearing its final, rather uninspiring BAE Systems livery.
BROOKLANDS MUSEUM

G-HAWK getting airborne on its maiden flight with Duncan Simpson at the controls at Dunsfold on May Day 1976. At t his stage it wore a two-tone brown colour scheme.
BROOKLANDS MUSEUM

A long-hoped-for acquisition finally arrived at the Brooklands Museum from Samlesbury, Lancashire on 23 January in the shape of BAe Hawk ZA101, formerly G-HAWK, following its donation by BAE Systems.

Upon assembly it will go on show in the Vimy pavilion at Brooklands, alongside Vickers Vimy replica NX71MY.

The machine was Hawker Siddeley’s privately funded Hawk demonstration and development aircraft, making its maiden flight from Dunsfold on 1 May 1976 with Duncan Simpson at the controls. It was the fifth aircraft in the Hawk flight test programme, and in addition to appearing regularly at Farnborough and other major airshows, it made extensive overseas sales tours including three to the Middle East and two in the United States, the latter leading to the US Navy’s major order for the T-45 Goshawk derivation.

Last flown at Warton during 2010 in current BAE Systems colours, ‘101 was subsequently used for apprentice training at Warton and finally at the company’s new Academy for Skills and Knowledge Centre which opened in late 2016 beside the main factory at Samlesbury. It was declared surplus to requirements in the autumn of 2018.

Having made two trans- Atlantic flights in its role as company demonstrator, G-HAWK will be temporarily displayed next to the Vimy replica to commemorate the centenary of Alcock and Brown’s trans-Atlantic flight in Vimy G-EAAR, which is now displayed in the Science Museum in London. The Hawk will eventually go into the Brooklands Flight Shed and be positioned alongside a former stablemate, the Harrier T52 demonstrator G-VTOL.

In its role as a development airframe, G-HAWK became the first Hawk 50, the original export version that offered a limited ground attack capability, which led to orders for 90 examples of the 50-series Hawk from Finland, Indonesia and Kenya. It was then used for development of the design up to Hawk 100 specification by testing small design changes and different payload configurations. The Hawk 100 was a two-seat advanced weapons trainer with a redesigned wing, additional avionics, optional forwardlooking infra-red, and hands on throttle and stick (HOTAS) controls with buttons and switches on the throttle lever and control stick to permit crews to access vital cockpit functions without having to remove their hands from the controls. The Hawk 102 to 115 variants were exported to Abu Dhabi, Bahrain, Canada, Indonesia, Oman, Malaysia and the United Arab Emirates.

More than 1,000 Hawks have now been built, but only one other example is on show in a UK museum, former Red Arrows Hawk T1 XX308 being displayed at the National Museum of Flight at East Fortune near Edinburgh.