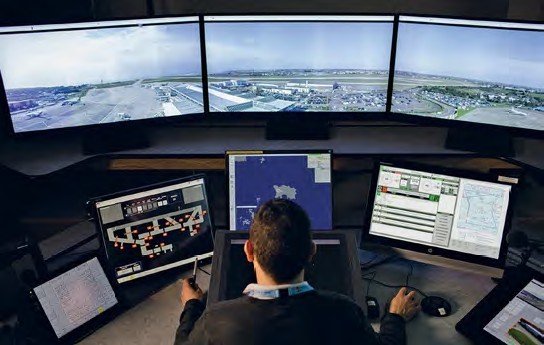 JERSEY AIRPORT recently became the first British airport to achieve approval for operational use of a digital remote tower.

Although Cranfield Airport has a digital tower, Jersey is the first British airport where the technology is being used actively to control regular commercial aircraft movements.

Approval followed a comprehensive testing period that included training for all air traffc controllers and culminated in an operational trial.

The digital tower uses technology from Frequentis AG designed to manage air traffc from a contingency operations centre, which would provide ATC services should the tower be unavailable.

The remote tower uses 13 cameras to create a 240o field-ofview of the airport, which is then displayed at the remote tower working position in the contingency facility

Systems Interface Limited managed all systems integration and installation for the Ports of Jersey, the airport’s owner. Jersey is the first remote digital tower implementation to involve the European Aviation Safety Agency, which oversaw and reviewed all regulatory and training requirements including human factors, human-machine interface and 3D simulator training.