PC-24 on the grass at Goodwood 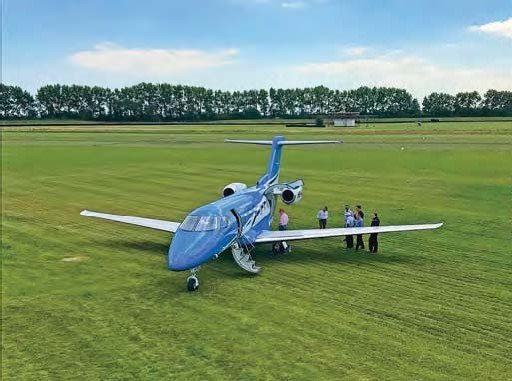 A first in the UK took place recently when a Pilatus PC- 24 business jet landed on the grass runway at Goodwood Aerodrome. The Pilatus was flown into the Sussex airfield for the Festival of Speed at the nearby Goodwood estate on July 4–7, becoming the first bizjet to land at the airfield. The PC-24 landed on grass runway 06/24, which is only 2,621ft long (799m) after flying direct from Pilatus’ base at Stans.

The PC-24 is the first bizjet designed to operate from very short and unpaved surfaces, which Pilatus says means the PC-24 can access to almost twice as many airports as other jets currently available on the market. It also means the PC-24 can fly closer to the destination, thereby avoiding the administrative expense usually associated with the larger airports and reducing transfers on the ground to an absolute minimum.

The PC-24 flown into and displayed at Goodwood was HBVSA (c/n P03), the first flight test prototype of the aircraft. The PC- 24 has already received European Aviation Safety Agency and the Federal Aviation Administration approval for use on dirt and gravel runways.

The operations from Goodwood’s grass followed another recent first for the PC- 24, after the first landing of the type on an unpaved airstrip by a customer. This involved PC-24 customer the Royal Flying Doctor Service (RFDS Central Operations) in Australia landing one of its aircraft on the unpaved airstrip at Kingoonya, a small township in South Australia with a permanent population of just 12 people.

Further certification for the PC-24 to operate from other surface types, including grass, is currently in the pipeline and should be complete by the end of this year, Pilatus said. The PC- 24 has also been certified for steep approaches, as required for the approach into London City Airport. Mark Broadbent