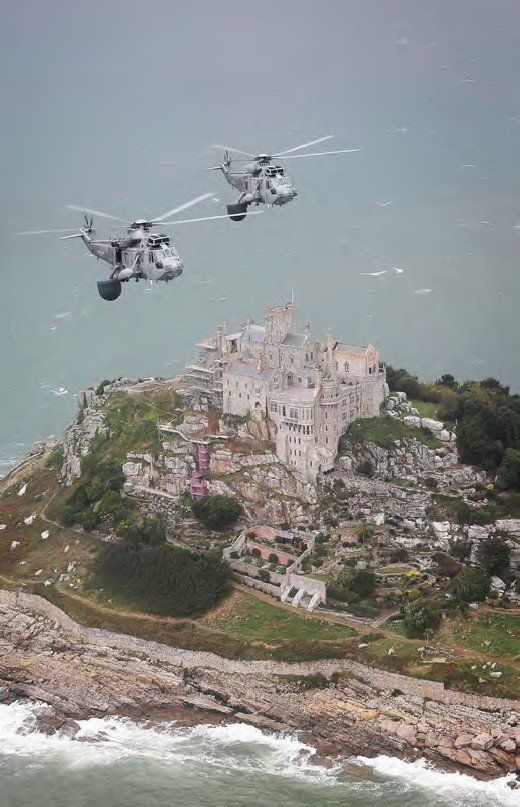 Pictured over St Michael’s Mount near Marazion, Cornwall, during the 849 Naval Air Squadron farewell tour on 19 September are Sea King ASaC7s ZE420, a 32-year-old airframe, and ZA126, which was originally built 38 years ago at Westland’s Yeovil plant.
CROWN COPYRIGHT

Two Westland Sea King ASaC7 airborne surveillance and control helicopters from 849 Naval Air Squadron at RNAS Culdrose made a three-hour tour of the West Country on 19 September to mark the retirement of the Sea King from UK military service after nearly half a century. A week later, a trio of ASaC7s flew from Culdrose to HMS Sultan at Gosport, where they await disposal.

Replacement for the Sea Kings will arrive in 2020 in the shape of Merlin HM2 helicopters being modified under Project Crowsnest. They will be fitted with the Searchwater radar for sea, land and air surveillance on the two new Queen Elizabethclass aircraft carriers.

The Westland Sea King first entered service in HAS1 anti-submarine helicopter form with 700 Naval Air Squadron in August 1969, less than a month after the Sikorsky SH-3 Sea King ‘Helo 66’ achieved worldwide fame recovering the crew of Apollo 11 following splashdown of their command module in the Pacific.

More than 140 of the twin-Rolls-Royce Gnome turboshaft-powered machines were built for the RN, and carried out anti-submarine, search and rescue, troop transport and airborne early warning and intelligence missions. For more on the latter, see pages 78-83.