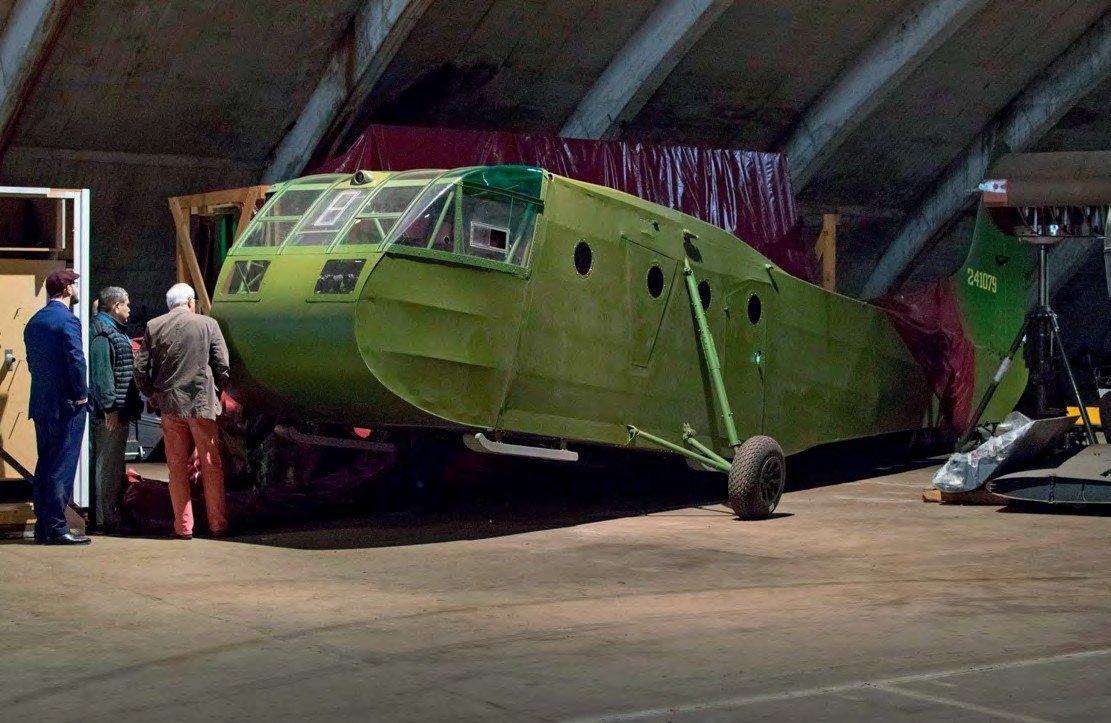 The restored fuselage of the Assault Glider Trust’s Waco CG-4A, pictured in storage at Cosford recently, will move to the Dumfries and Galloway Aviation Museum later this year.
GARY WANN 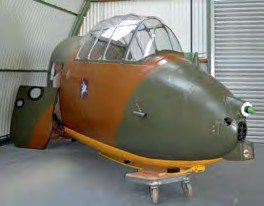 The beautifully restored Hotspur nose in one of two recently erected buildings at the blossoming museum at Tinwald Downs.
BOB SLOAN

THE Assault Glider Trust’s Waco CG-4A Hadrian glider is destined to be relocated to the Dumfries and Galloway Aviation Museum at the old Tinwald Downs airfield, following three years in storage at Cosford. The rare troop-carrier will go on display in a new building alongside an Airspeed Horsa fuselage, the front fuselage of a General Aircraft Hotspur training glider, and a wealth of airborne forces relics and memorabilia.

The Hadrian was acquired by the trust from the Silent Wings Museum in Lubbock, Texas, arriving at RAF Shawbury — where hangar space had been made available — for a complete rebuild in February 2005. The volunteer restoration team had a comprehensive set of CG-4A plans on microfilm, but a certain amount of reverse engineering of parts was still required. Following completion, it was moved to Cosford in March 2014, along with the trust’s Horsa replica.

The new airborne forces exhibition at Dumfries is being masterminded by Edinburghborn Jim Kirkbride, who served with the Paras from 1989-2011. Colchester-based Jim also looks after Douglas C-47 KP208, which was on display at the Airborne Forces Museum (AFM) in Aldershot until it closed in 2008. The Hotspur nose was previously at the AFM, and is on very long-term loan to Dumfries. It has been painstakingly restored there over the past few years by John Hilsley. The section is the largest known genuine surviving Hotpur relic: a replica of a Hotspur II is exhibited at the Museum of Army Flying at Middle Wallop, Hampshire.

“The Hadrian will go on display in a new building alongside a Horsa fuselage, the front fuselage of a Hotspur and a wealth of relics”

The 16ft-long section of Horsa fuselage was recovered from the village of Caersws in Powys, Wales. Jim Kirkbride says, “It had been converted into a caravan, with windows in the ‘gable’ ends, a sink, and was fully carpeted.”

On 26 April, Jim was due to collect a Willys Jeep from the D-Day Museum in Portsmouth, where it was recently declared surplus to requirements, along with a replica CG-4A Hadrian which will be making the long journey north to Dumfries as well. He adds, “We also have several dioramas, including one of the Pegasus Bridge attack, which have been generously loaned to us by Airborne Assault, the museum of the Parachute Regiment and Airborne Forces at Duxford.”