The F-15E Strike Eagle was intended to replace the US Air Force’s fleet of General Dynamics F-111 strike aircraft, it was first flown from St Louis on December 11, 1986. A total of 236 F-15Es were built between 1985 and 2004 (in 1997 McDonnell Douglas merged with Boeing) which were all delivered to the US Air Force. Development continued and several variants have since been sold to friendly air arms. 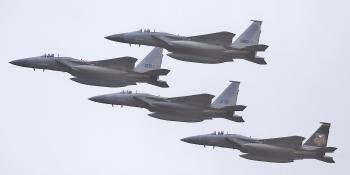 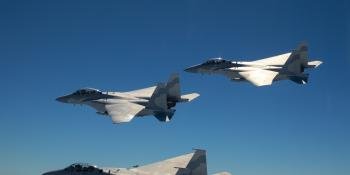 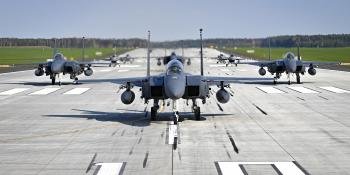 As Russian troops were massing on Ukraine borders, joint USAF and Polish Air Force drills were taking place in Baltic airspace, as we report 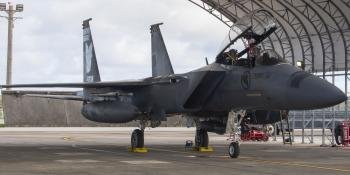 A contingent of air assets from the Republic of Singapore Air Force – including multi-role fighters and CAEW aircraft – has arrived at Andersen AFB, Guam, for a two-month deployment to the Pacific island 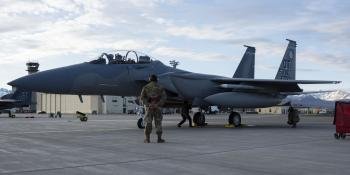 The USAF has lauded the capabilities of its new multi-role fighter, the Boeing F-15EX Eagle II, after the first two examples completed the type’s exercise debut at Northern Edge 21 in Alaska 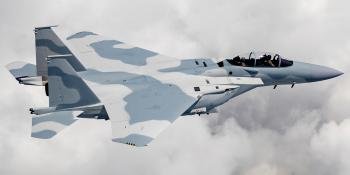 A Boeing F-15QA (Qatar Advanced) multi-role fighter destined for the Qatar Emiri Air Force was involved in a landing mishap at St Louis-MidAmerica Airport in Illinois on May 18, forcing both crew members to eject from the aircraft 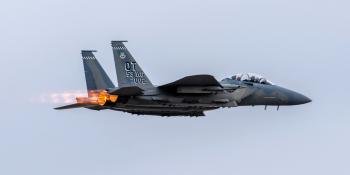 Just weeks after their delivery to Eglin AFB in Florida, the USAF’s first two Boeing F-15EX Eagle IIs have taken to Alaskan skies for Exercise Northern Edge 21, which is being held from May 3-14 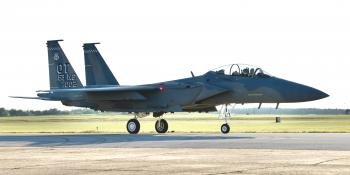 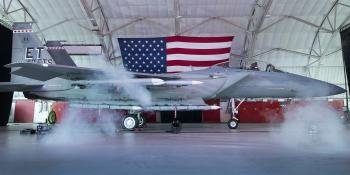 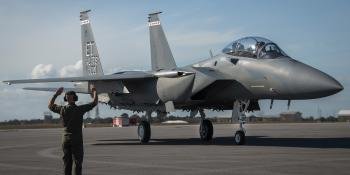 The USAF formally accepted its first F-15EX at Boeing’s facility in St Louis, Missouri, on March 10 – just over a month after the multi-role fighter graced the skies for the first time

In 1993, Saudi Arabia ordered 72 two-seat F-15S aircraft with deliveries taking place between 1995 and 1999. In October 2010, the Defense Security Cooperation Agency (DSCA) notified the US Congress as to the possible sale to Saudi Arabia of 84 new-build F-15SA Strike Eagles, plus the upgrade of 70 (later reduced to 68) of the Royal Saudi Air Force's surviving F-15Ss to this improved standard. Deliveries of the new-build F-15SAs to Saudi Arabia was completed in December last year, while two examples have been retained in the USA for development and trials work.

On January 27, 1994, the Israeli Government announced it intended to procure what was designated the F-15I. The deal involved 21 aircraft with an option for four more which was exercised in November 1995. The first F-15I touched down in Israel on November 6, 1997. Follow-on deliveries continued until September 1999 when the 25th jet arrived.

South Korea placed an order in 2002 for 40 F-15K Slam Eagles. They were followed by a second batch of 21 aircraft, ordered in April 2008. Deliveries to the Republic of Korea Air Force (ROKAF) were completed in April 2012.

The Republic of Singapore Air Force has a fleet of 40 of the F-15SG, the first example of which was delivered in 2009.

In March 2009, Boeing unveiled a new variant of the F-15 called the Silent Eagle aimed at export customers. The headline difference was the effort to make the F-15 stealthy, among a range of other improvements. First flight from St Louis took place on July 8, 2010, though no examples were ever built for customers. However, the F-15SAs for Saudi Arabia did incorporate some of the improvements offered in the F-15SE. Boeing now markets its latest variants under the name ‘Advanced F-15’ with the F-15SA aircraft being the first of this standard.

In November 2016, US State Department approval was granted for a possible Foreign Military Sale to the Government of Qatar of 72 F-15QA multi-role fighter aircraft. The following year a deal was signed for 36 F-15QAs with first flight of this variant taking place on April 13, 2020. Initial examples are expected to be ready for delivery this year.

The latest variant is the F-15EX which the US Air Force has named Eagle II. It is a two-seat F-15 from the Strike Eagle family, but single pilot operable. Externally similar to the F-15E with the same outer mould line. Both the wing and the fuselage have been strengthened to improve fatigue life, based on discoveries found during phase maintenance inspections. The Advanced Eagle has an open mission system architecture and processor. These allow rapid insertion of app-based software, which in turn enables insertion of, for example, new antennas, or the ability to conduct a new role like manned-unmanned teaming or functioning as a data node in the nascent Air Force Advanced Battle Management System dubbed ABMS. These examples are only made possible because of the aircraft's digital backbone and a fibre-optic data bus.

Weapon payload is another primary capability. The F-15EX will become the first aircraft in the air force inventory capable of carrying very large hypersonic stores measuring 20ft in length and weighing more than 7,000lb.

Boeing's F-15 program manager, Prat Kumar said: "What we offer with the F-15EX and its advance jamming capability is survivability against a broad range of frequencies. The aircraft is affordable because it doesn’t require low-observable coating maintenance and offers a rapid means to adapt software. An advantage for adjusting its electronic warfare suite to counter new and emerging threats." Both the front and the aft cockpit have undergone redesign as Prat explained: "As we learned about mission management, especially from the F-22 Raptor and F-35 Lightning II, we realised the amount of sensor and data fusion provided to the pilot was increasingly important. Our approach was to equip each cockpit with a large 19 x 11in high-definition display, rapidly adaptable, easily customised and synched to the head-up display.

"We also realised the importance of rapid weapon targeting and do so with a helmet-mounted sight… A digital helmet-mounted sight attached to the top of the pilot and the weapons system officer’s helmets interconnects with the aircraft and depending on which mode is selected, displays different information. It provides them with advanced targeting information and greater situational awareness."

Digital capability of the F-15EX comprises a variety of systems. Upfront is the APG-82 radar's active electronically scanned array (antenna), while located just aft of the radar is the mission computer known as the Advanced Display Core Processor II (ADCP II). The latter runs all of the avionics systems on the aircraft and manages all the data migrating around the F-15EX. The processor has plenty of memory, and processing power that enables it to operate at 87 billion instructions per second, and sufficient input-output bandwidth to meet the F-15EX's future and projected sub-system demands. ADCP II also enables full exploitation of the APG-82 radar's capabilities such as tracking a large number of targets.

Right next to the mission computer is the Multifunctional Information Distribution System-Joint Tactical Radio System. Abbreviated to MIDS JTRS, it's a four-channel radio designed to run the complex Link 16 data link waveform, and up to three additional communication protocols, including the airborne networking waveform. The MIDS JTRS will connect the F-15EX with all of the other aircraft types equipped with the Link 16 system. Located close by to the MIDS-JTRS is the electronic warfare system produced by BAE Systems, designated the ALQ-250 and called the Eagle Passive/Active Warning and Survivability System (EPAWSS).

In mid-July 2020, the US Air Force awarded Boeing a contract valued at nearly $1.2bn for a first low-rate initial production lot of eight F-15EX aircraft. Under the terms of the contract, Boeing will provide for the design, development, integration, manufacturing, test, verification, certification, delivery, sustainment, and modification of the F-15EX aircraft, including spares, support equipment, training materials, technical data, and technical support.

Under current plans, the air force intends to procure 76 F-15EXs over the five-year Future Years Defense Program; the eight in Lot 1 were approved in the FY2020 budget and 12 were requested and approved in FY2021. F-15EX aircraft built in Lot 2 and Lot 3 will equip the Oregon Air National Guard's 173rd Fighter Wing based at Kingsley Field from FY2024, followed in FY2025 by the first aircraft for the 142nd Wing at Portland Air National Guard Base.

For the air force, the F-15EX represents more than new iron on the ramp. As a major design series type, it will require minimal transitional training or additional manpower and little to no infrastructure changes at the bases selected to host the type.

According to General Holmes, the then commander of Air Combat Command: "The F-15EX will be ready to fight as soon as it comes off the line. When delivered, we expect bases currently operating the F-15 to transition to the new EX platform in a matter of months versus years."

The first of eight F-15EX aircraft to be assigned to Eglin AFB, Florida, was flown to the base on March 11. Test data from the extensive flight test programme undertaken by Air Force Materiel Command for the Saudi F-15SA is being used to support the F-15EX, though specific US avionics and software will be tested at Eglin and other locations.

Commenting on the F-15EX, the Air Force Life Cycle Management Center at Wright-Patterson AFB, Ohio said in a press release: "The F-15EX provides a cost-effective and expedient solution to refresh [replace] the F-15C and F-15D fleet and augment the F-15E fleet. This will meet National Defense Strategy capability and capacity requirements well into the 2040s, while avoiding aircraft availability disruptions that would result from a service life extension or modification programme."

During a ceremony held at Eglin on April 7, the air force unveiled the name of its newest fighter jet as the F-15EX Eagle II. Speaking at the ceremony, Lieutenant General Duke Richardson, the military deputy in the Office of the Assistant Secretary of the Air Force for Acquisition, Technology, and Logistics, said: "Quick adoption of the F-15EX is needed because of the state of the current F-15C and F-15D fleet. Ten percent of the fleet is grounded due to structural issues, with 75% flying beyond their certified service life. The fleet has an average age of 37 years, and a life extension is cost prohibitive."

With new F-15s to roll off the production line for years to come, the Eagle in its various forms is set to continue to soar for decades to come.